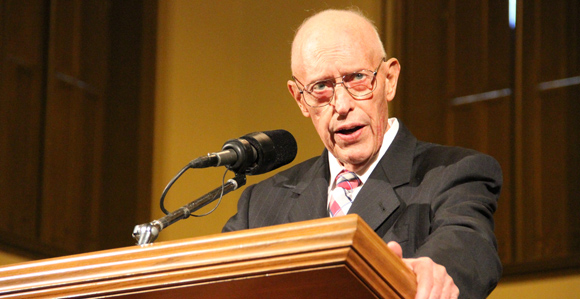 Joseph Fielding McConkie speaks of his father, Bruce R. McConkie, at the Men and Women of Faith Lecture Series sponsored by the Church History Library on April 11.

“Bruce Redd McConkie was a man of faith, raised in the home of faith to do a work of faith.” —Joseph Fielding McConkie, Elder McConkie’s son

When Bruce R. McConkie was a boy growing up in Monticello, Utah, the town bully approached his father, Oscar W. McConkie, and told him he had a boy who could whip his boy anytime, anyplace.

“Well, that may be so,” the father responded, “but that is not the purpose for which I am raising my son.”

Of course, the son grew to be a member of the Quorum of the Twelve from 1972 until his death in 1985, well respected and remembered for his written and spoken discourses in which he taught the doctrines of the gospel with clarity and power.

The above incident was recounted by Elder McConkie’s son Joseph Fielding McConkie on April 11 in an address in the Assembly Hall on Temple Square in Salt Lake City for the monthly Men and Women of Faith Lecture Series sponsored by the Church History Library. His topic was “Bruce R. McConkie: A Special Witness.”

“Bruce Redd McConkie was a man of faith, raised in the home of faith to do a work of faith,” said Brother McConkie, an emeritus professor of ancient scripture who taught at BYU for 30 years.

“At his funeral, then Elder Boyd K. Packer [of the Quorum of the Twelve] said, ‘If ever there was a man who was raised up unto a very purpose, if ever a man was prepared against a certain day and need, it was Bruce R. McConkie.’ ”

Indeed, in a father’s blessing given prior to his departure for a mission, Elder McConkie was promised, “The day will come while you are yet tabernacled in the flesh that all men who know you will look to you for counsel and for the witness of the truth. … The Lord will bless you, and your heart will be filled with understanding. Your wisdom shall be great, extending beyond the boundaries of the earth.”

Brother McConkie said the power and faith with which his father spoke rests upon these principles:

“You cannot teach what you do not know.”

“If you have not taught anything, you cannot testify to anything.”

“Competence as a witness is predicated upon empirical knowledge, that which you have experienced.”

“A valid and binding testimony of Christ grows out of a sound understanding of the Restoration. You cannot get to Gethsemane without going through the Sacred Grove.”

Standing above Elder McConkie’s many mentors were his father and his father-in-law, President Joseph Fielding Smith, Brother McConkie remarked. “Granddaddy Smith carried with him the spirit of his fathers, who loved the Prophet Joseph Smith in greater measure than any man I have ever met.”

In the days of two-and-a-half-minute talks in Sunday School, all of Elder McConkie’s children spoke on the same subject: Joseph Smith. “If help was needed in preparing the talk, Dad would guide us back to the First Vision,” Brother McConkie said.

Brother McConkie said that when the children were grown and he found something he particularly wanted them to read, he would buy eight copies and give one to each of the children.

“He gave each of us a copy of Robert J. Matthews’s book titled A Plainer Translation: A History and Commentary on the Joseph Smith Translation, which was published in 1975,” he said. Brother Matthews and Elder McConkie were on the Scriptures Publications Committee. The committee’s work produced the 1979 LDS edition of the King James Bible, which includes some 600 footnotes with text from the Joseph Smith Translation and a section containing JST passages too lengthy for inclusion as footnotes.

Brother McConkie said his father drew freely from what became known as the Joseph Smith Translation in his own writings, including Mormon Doctrine, Doctrinal New Testament Commentary, and the six-volume work beginning with The Promised Messiah and concluding with The Millennial Messiah. 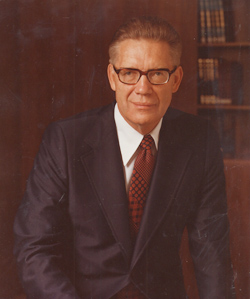 Elder Bruce R. McConkie served as a member of the Quorum of the Twelve from 1972 until his death in 1985. Photo ©IRI.

He recalled his father’s address at a 1979 BYU symposium on the Doctrine and Covenants in which he said, “The test of discipleship is how totally and completely and fully we believe the word that was revealed through Joseph Smith and how effectively we echo or proclaim that word to the world.”

Regarding the man himself, Brother McConkie said, “The things Dad enjoyed the most were a good gospel discussion, a walk in the evening with Mother. The assignment he enjoyed the most in all of his Church service was being mission president. He loved to climb mountains. … He liked to go birding with Mother. … He was both a rock hound and a lapidary: he loved to cut, polish, and set stones.”

Later in life, he became a jogger and secretly desired to run a marathon but never had the time to train properly, the son said.

“He never pretended to be what he was not. He assumed no knowledge and experience that was not his, yet he was wholly confident in what he knew.”

When he was called upon to speak, “you knew you were going to be taught,” Brother McConkie said.

Many remember his final general conference sermon given in 1985, in which he said in coming days he would meet the Lord Jesus Christ, “but I shall not know any better then than I know now that He is God’s Almighty Son, that He is our Savior and Redeemer.”