“Small and Simple Things” Prepared America for the Restoration of the Gospel, said President Ballard 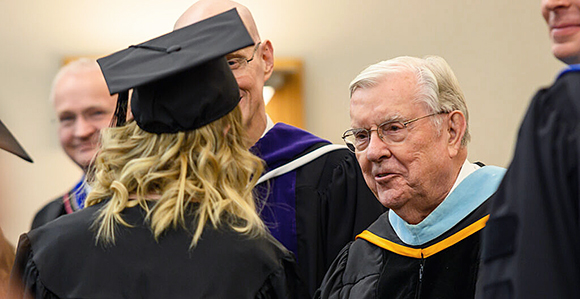 President M. Russell Ballard, Acting President of the Quorum of the Twelve Apostles, smiles as he greets a graduate following the convocation for the College of Education and Human Development: Sociology, Social Work, and Psychology on Wednesday, December 18, 2019. Photo by J. Lawson Turcotte, BYU-Idaho.

“Expect help from the Lord. Pray for it. And when it comes and appears to you to be small and simple means, do not disregard it. Do not dismiss it. Do not relegate these spiritual promptings to a footnote in your own personal history." —President M. Russell Ballard

Wandering the decks of the Mayflower during a storm, a young, poor indentured servant named John Howland was knocked off by a wave and tumbled into the ocean.

Howland should have died. But as Howland plummeted into the sea, he felt in his hand a rope—the ship’s topsail halyard—and was pulled back onto the ship.

“It should not have been there. Yet there it was, precisely where young John needed it to be,” said President M. Russell Ballard, Acting President of the Quorum of the Twelve Apostles, during Brigham Young University–Idaho’s fall commencement, held at the BYU–Idaho Center on Wednesday, December 18.

“Indeed, the Lord placed that halyard line into the hand of the drowning John Howland, for in him was the blood of some of the leaders of the Restoration of the gospel of Jesus Christ.”

“It is estimated that John and Elizabeth’s posterity would number today over five million people, some of which rose to importance in every field of endeavor, including presidents of the United States of America and apostles and prophets of The Church of Jesus Christ of Latter-day Saints,” he said.

Encouraging BYU–Idaho graduates to recognize the Lord’s hand in their lives, President Ballard reflected on Nephi’s vision in the Book of Mormon about the founding of the United States and preparation for the Restoration of the gospel—a vision based on one miracle after another.

“Expect help from the Lord. Pray for it. And when it comes and appears to you to be small and simple means, do not disregard it. Do not dismiss it. Do not relegate these spiritual promptings to a footnote in your own personal history,” President Ballard said.

“Watch how, line upon line, His tender mercies evolve into the greatest blessings in your lives and in the lives of those around you. The more you recognize God’s hand, the more you will feel His Spirit and His love for you.” 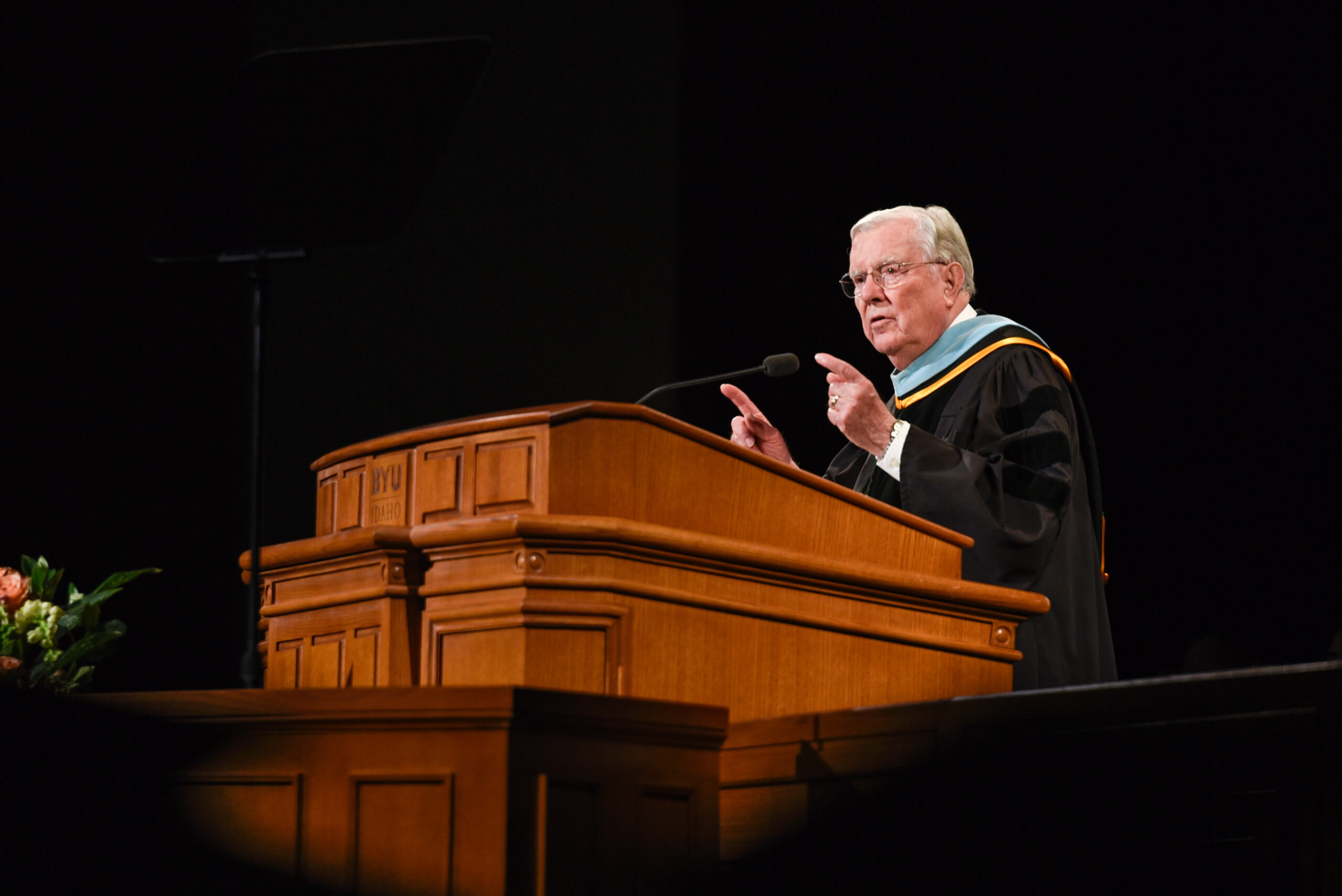 Miracles for the Pilgrims

During a trip this past summer to Plymouth, Massachusetts, President Ballard walked the ground where the Pilgrims had walked and learned of the many miracles the Lord provided for them.

After a severely delayed voyage, the Pilgrims landed in a spot that had been prepared—nearly 250 miles north of their intended location—where the land could be planted and farmed, where the Town Brook supplied clean drinking water, and where the Native Americans taught them how to raise successful crops.

“When I consider the Mayflower story, I can testify—not only as a Church leader but also as a father, grandfather, and great-grandfather—that Nephi’s vision was correct when he declared that by small means the Lord can bring about great things,” he said.

Fortunately, the Pilgrims did not forget that the Lord had worked miracles for them. “They transferred their faith in miracles to the next generations,” President Ballard said. “And it was a good thing they did, because the kingdom of God on earth could not be restored in this land until a divinely inspired constitution would protect its existence.”

That constitution would only come when “wise men” whom the Lord “raised up unto this very purpose” had “redeemed the land by the shedding of blood” (Doctrine and Covenants 101:80). 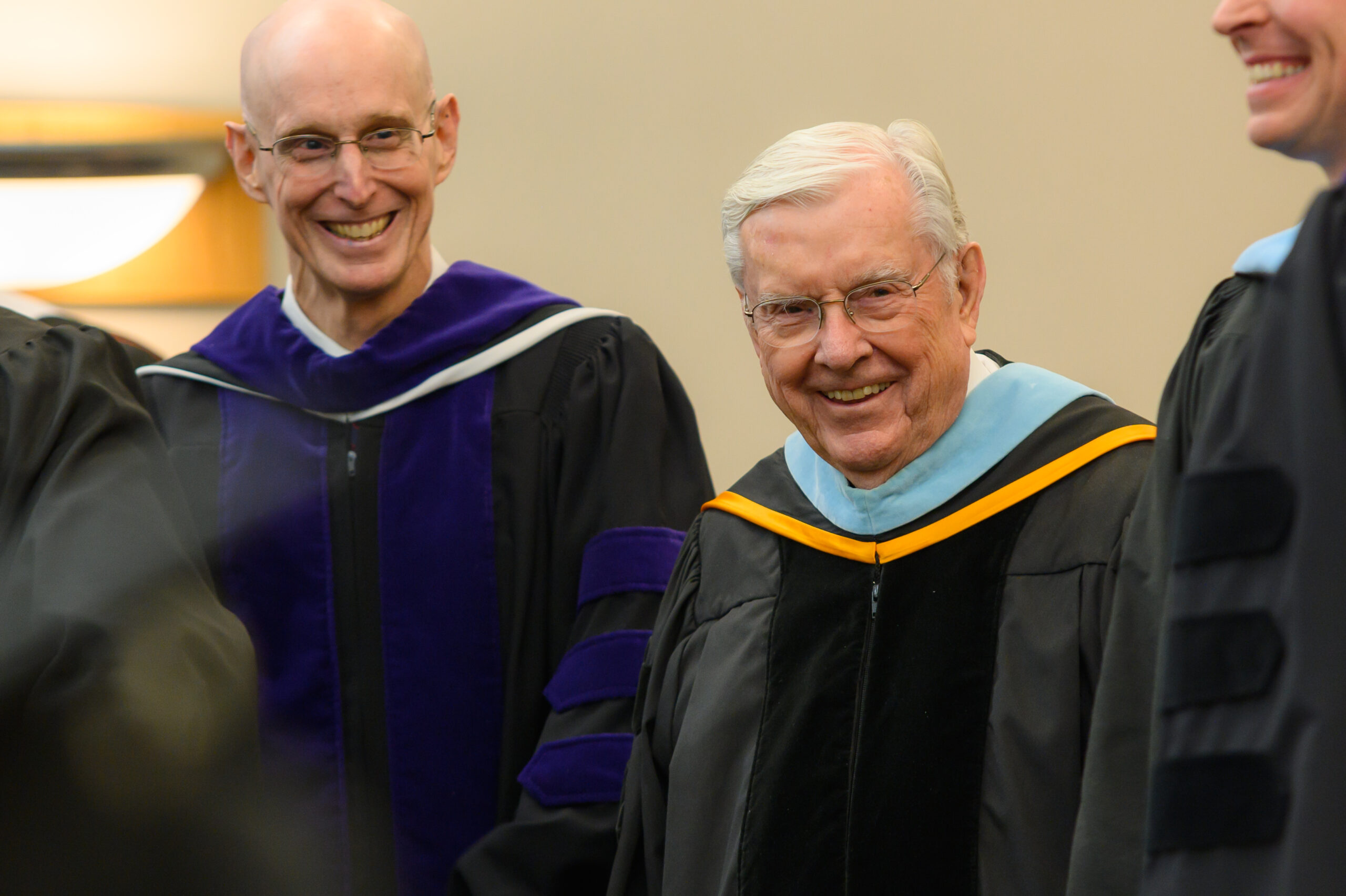 Miracles of the American Revolution

After Nephi described the Pilgrims and early settlers in the land, he saw the patriots of the American Revolution. Though “their mother Gentiles were gathered together upon the waters, and upon the land also, to battle against them[,] . . . the power of God was with them” (1 Nephi 13:17-18).

President Ballard said of the prophecy of the Revolutionary War, “There is perhaps no better example of history corroborating scripture than this.”

From Plymouth, President Ballard traveled to Boston to learn more about the miracles of the Revolutionary War. One such miracle occurred on the high grounds of Dorchester Heights. It was the place where General George Washington’s men built two strongholds with at least 20 cannons and thousands of troops—enough to encourage the British to abandon New England.

With General Washington’s permission, Henry Knox had taken a 300-mile journey to New York to seize the cannons. To transport 120,000 pounds of mortars and cannons back to General Washington, Knox built sleds. But there was no snow.

Then after much prayer, snow came on Christmas morning 1775. Even the Hudson River was frozen over. The journey back to General Washington was successful.

General Washington ordered his men to take the cannons and guns to the top of Dorchester Heights. The high ground would allow the Americans to gain an advantage over the British troops hunkered down in Boston.

But the British were watching. It would be impossible to get to the heights without them noticing.

“Washington moved anyway, and he was once again blessed,” President Ballard said.

During the night of March 4, 1776, a layer of fog dropped between the American and British troops. The next morning, General Washington and his troops were stationed and ready at the top of Dorchester Heights.

The British were shocked. The incident had been done “with an expedition equal to that of the genie belonging to Aladdin’s wonderful lamp,” one British officer reported.

These miraculous trends continued through most of the key battles during the seven-year conflict, until the British abandoned the entire American continent, President Ballard said. “At last, the land was free and the foundation for the Restoration of the gospel of Jesus Christ was surer than ever.” 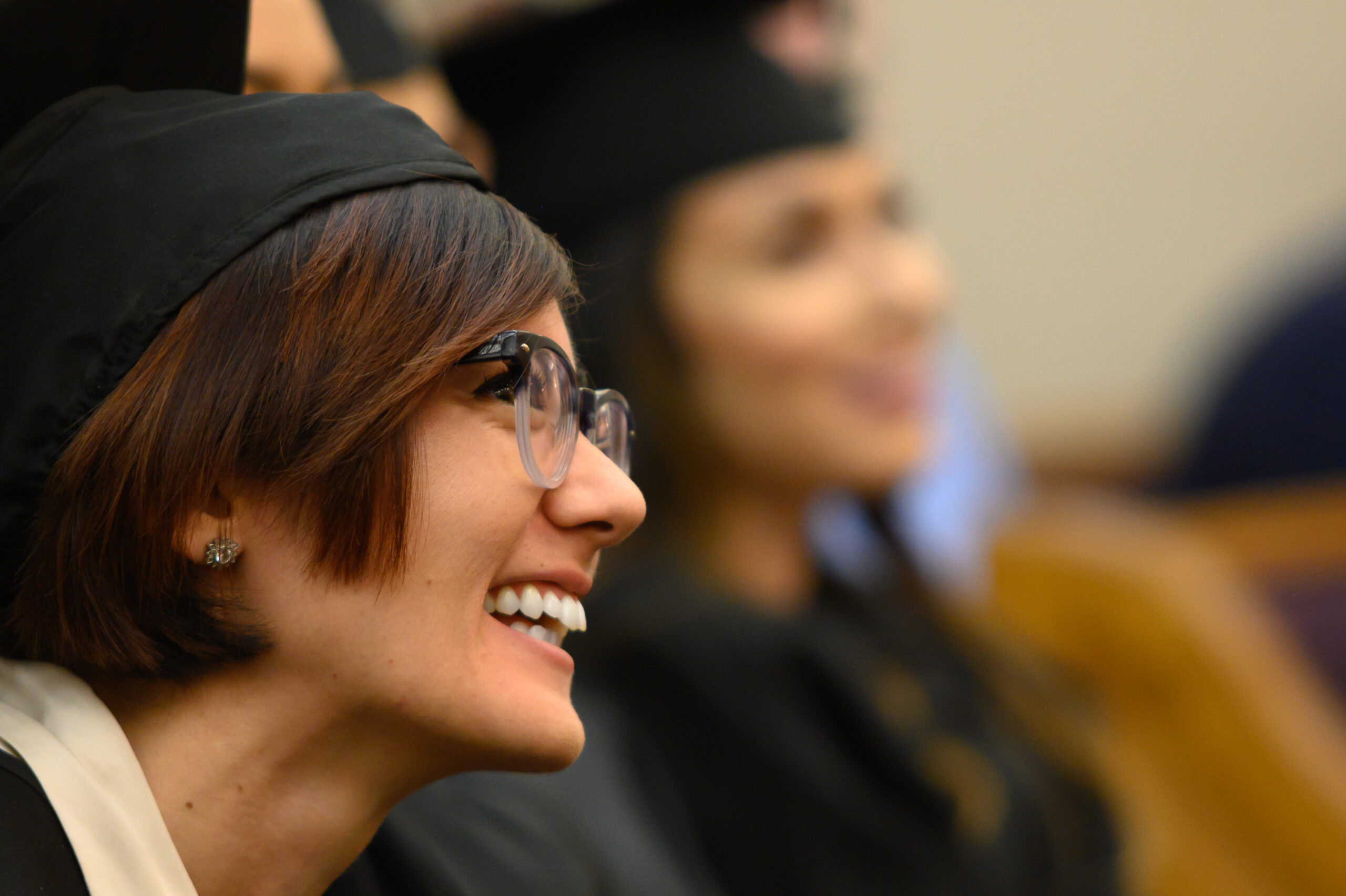 A graduate smiles during the convocation for the College of Education and Human Development: Sociology, Social Work, and Psychology on Wednesday, December 18, 2019. Photo by J. Lawson Turcotte, BYU-Idaho.

Letters and diaries of the Founding Fathers and Mothers reveal a belief that if they would stay close to God—individually and as a nation—they had a better chance at receiving needed miracles. This relationship with God can be seen as a covenant relationship, President Ballard explained.

“I invite you to think more upon these covenants you have made. Listen to the words spoken at the sacrament table during Sunday worship. Go often to the temple, and listen to the blessings promised to you there.

“I encourage you to utilize these powerful covenants to seek those blessings and miracles you need. And again, I say to you: Expect those blessings. Recognize them—even and especially the small ones—when they come quietly. And be grateful for them.”

Live, he said, “with righteousness, humility, and gratitude to God” as General Washington taught his troops.

At a devotional in Boston in October, President Ballard pled with Latter-day Saints to “join a new movement” by inviting their neighbors, colleagues, and friends to pray for the nation, its leaders, and its families.

“We all need to do this every day,” President Ballard told the graduating class. This was the covenant formula Nephi saw that brought independence and the Restoration of the gospel, which “came through prayer and righteous believers in God.”

April 2020 will mark 200 years since Heavenly Father and His Son Jesus Christ appeared to Joseph Smith to open the final dispensation preparing for the Second Coming of the Savior.

“Just think of that: you are recipients of this great time when the gospel is upon the earth and you are free to receive it. You are free to live it.”

Gratitude for the gospel and the Savior’s love for all of Heavenly Father’s children is what President Ballard felt as he overlooked the Sea of Galilee and the surrounding valleys and hills in Israel three weeks ago.

“I do not have adequate words to express to you all the blessings that are ours because we believe that Jesus Christ is the Savior and Redeemer of all mankind,” President Ballard said.

“Now as you graduate and move to the next phase of your exciting lives, I pray you will never forget or become casual in your relationship with your Heavenly Father and His Beloved Son Jesus Christ. The life of Jesus Christ is one of miracle after miracle.”

Prior to President Ballard’s address, Elder Paul V. Johnson, a General Authority Seventy and Commissioner of the Church Educational System, encouraged graduates to make a difference in the world by keeping their covenants and using their talents and gifts to further the Lord’s work. “These are your days,” he told them.

“In God we can and must trust,” declared President Henry J. Eyring, president of BYU–Idaho. Amid a widespread drop in spiritual faith in the world, BYU–Idaho graduates should “take the spiritual high ground” and continue to strengthen their testimonies of fundamental gospel truths.

President Eyring awarded diplomas to 2,753 students. Of those, 607 began as BYU-Pathway Worldwide students. 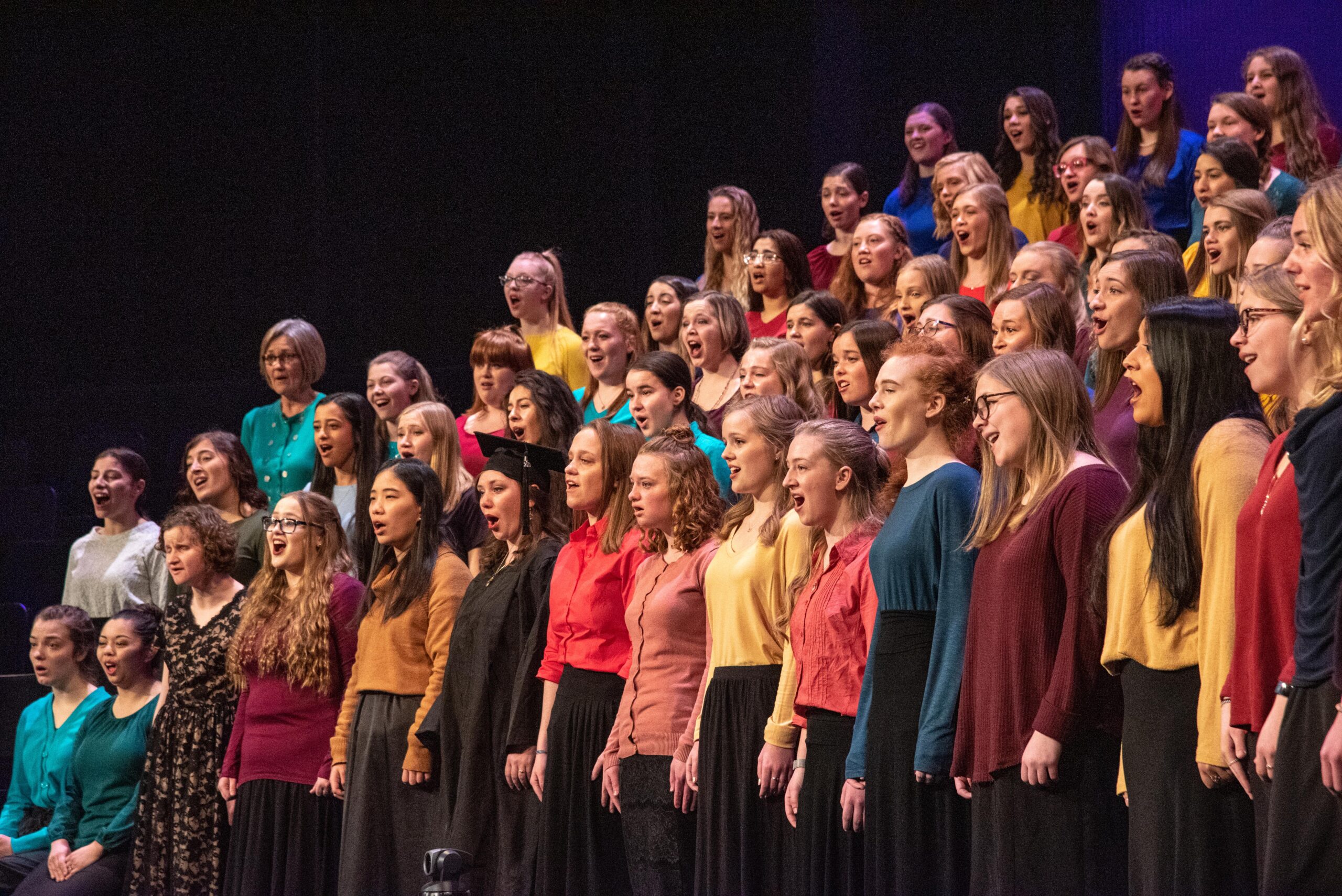 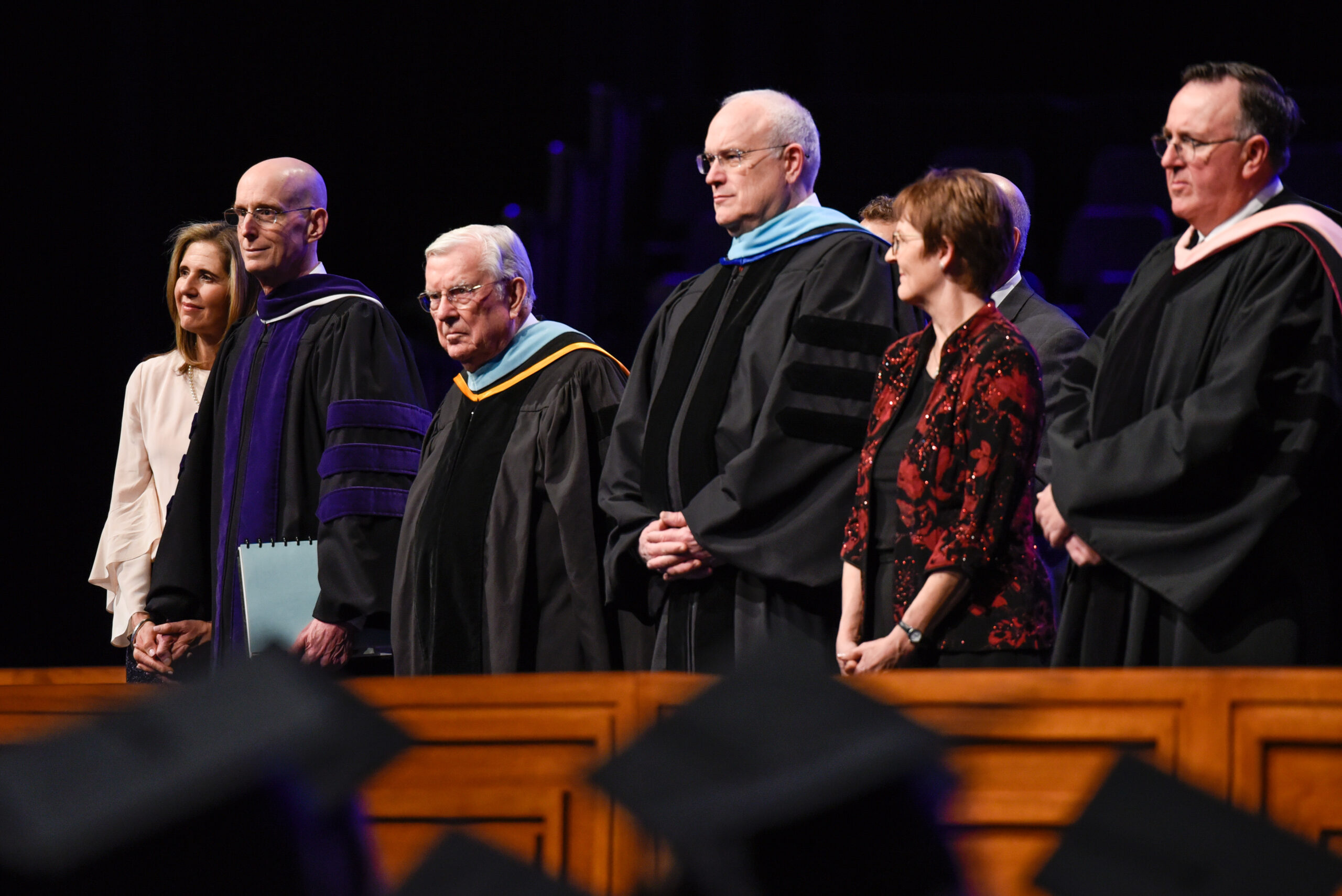 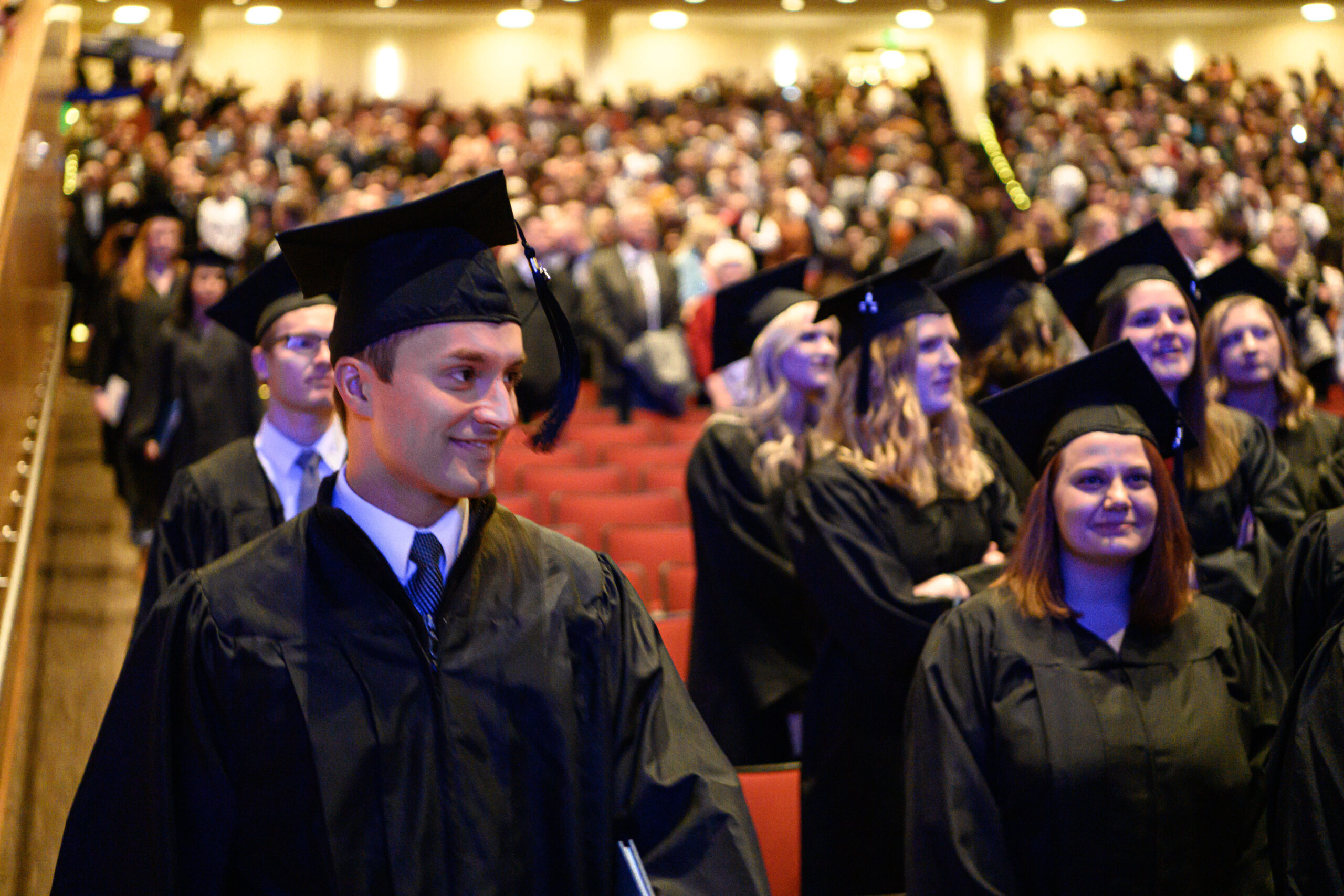