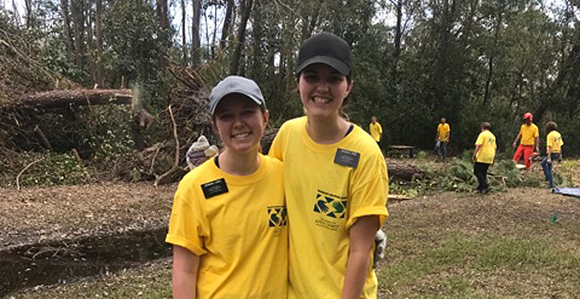 Sister Alicia Jones, left, and Sister Dawna Herr jumped at an opportunity to join a September 22, 2018, cleanup project in waterlogged Wilmington, North Carolina, prior to their September 26 missionary release date.

A sprawling Church-sponsored cleanup in hurricane-battered communities across eastern North Carolina was being planned for the weekend of September 29–30. Additional service projects were expected in the days and weeks to follow.

The North Carolina Raleigh Mission missionaries were being enlisted to help during the ongoing recovery. But Sister Herr and Sister Jones realized they both would be returning to their homes days before the brunt of the missionary relief efforts began.

The sisters felt, well, a bit left out.

“We really wanted to help out and be part of that experience,” said Sister Herr of Tucson, Arizona.

So the two missionaries, who were not companions, approached President Matthew Holland and asked if they could join one of the preliminary work crews prior to their September 26 departures.

“The sisters told me they did not want to miss the opportunity to serve,” said President Holland. He immediately agreed.

Sister Herr was serving in a Spanish-speaking area in Durham. Sister Jones was assigned to an area in nearby Cary.

On Saturday, September 22, President Holland’s wife, Sister Paige Holland, and their 14-year-old son, Danny, picked up the two sisters on their way to a stake-sponsored work assignment in flooded Wilmington.

The missionaries spent the day clearing out fallen trees and debris from a member’s home. Wearing yellow Helping Hands T-shirts and donated work clothing, they toiled alongside Sister Holland, Danny, and a few other missionaries serving near the Wilmington area.

“We love the North Carolina people so much, so it was a beautiful experience to help them out,” said Sister Jones of Chubbuck, Idaho. “We’re so grateful to have had this opportunity before we went home.”

Sister Herr called working in the heat, the humidity, the grime, and the mud a sacred experience. In the final days of her North Carolina mission she was reminded “there is so much we can do to help our brothers and sisters.”