Sister Jean B. Bingham: A Builder of the Church 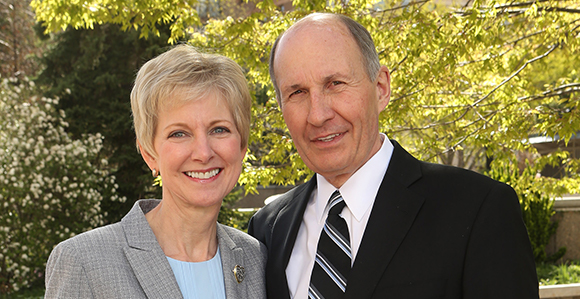 Family
Born June 10, 1952, in Provo, Utah, to Robert R. and Edith Joy Clark Barrus. Married Bruce Bryan Bingham on December 22, 1972, in the Provo Utah Temple. They are the parents of two children.

Education
Earned an associate degree from BYU in 1974 and earned a bachelor’s degree and master’s degree from National Louis University in 2000.

Has worked in schools with children who speak English as a second language. Worked at the English Skills Learning Center in Salt Lake City, Utah.

Community service
Volunteered in schools working with children who speak English as a second language, has been a tutor in the community in which she lived, and has welcomed birth mothers into her home, as well as infants waiting for adoption. Fostered children for many years.

Sister Jean Barrus Bingham was a child when she first helped “build the Church.” Her father was the bishop when their ward in Minneapolis, Minnesota, was constructing a new meetinghouse in the days when Latter-day Saints contributed to building projects, not only with funds but also manual labor. Children did their part in “building the Church” by picking up debris and sanding some of the wood.

Born in 1952 in Provo, Utah, to Robert and Edith Joy Barrus, she grew up with six sisters and two brothers. The family moved each time her father was transferred due to promotions at work. She attended elementary school in Texas and Minnesota and finished high school in New Jersey. She and her siblings were the only LDS students in their schools until they moved to New Jersey, where she was delighted to discover a girl from her new ward in her freshman class.

As a teenager, Sister Bingham had another opportunity to help “build the Church” when she was living in New Jersey in 1968 and it was announced that a temple would be built in the Washington, D.C., area.

“Church leaders were asking for donations,” she said. “I had an after-school job and saved $75 dollars, which I contributed to the building of the temple. I thought jokingly to myself, ‘Maybe when I visit there I’ll have part of a chair.’”

She and her husband, Bruce Bingham, whom she met when they were students at Brigham Young University, were married in December of 1972. After graduation, they moved to Illinois. Living in that part of the United States gave her an opportunity to attend the temple that she, as a teenager, had “helped to build.”

During the years they lived in Illinois and Wisconsin, Church members from the local units would get on a bus on Wednesday afternoon, travel through the night, spend Thursday and Friday in the temple, and return home on Saturday.

“It was a 16-hour drive. During those two days in the temple we’d try to get in as many sessions as we could—seven or eight sessions a day. That was our yearly trip to the temple. We were always excited to go to the Washington D.C. Temple, and when the Chicago Illinois Temple was dedicated, that made it even easier to attend the temple on a regular basis.” She marvels at how many temples there are now in the eastern and central states of the U.S.

Her parents set an example of the importance of temple attendance. “My father was from Grantsville and my mother was from Tooele, Utah. Every year, my mother would drive us kids to Utah in the station wagon and we’d spend three or four weeks there so we would have a chance to get to know our grandparents, our cousins, and our pioneer heritage. One of the first things my mother would do on our trips each year was go to the Salt Lake Temple.”

Sister Bingham, who was sustained April 1 as Relief Society General President, has continued to help build the Church over the years. She has served in wards as a counselor in a Relief Society presidency, Primary president, and Young Women president and as a stake Young Women president. In addition, she has served as a temple worker and early-morning seminary teacher. She served on the Primary general board for six years before she was sustained during the 2016 April general conference as a counselor in the Primary General Presidency.

In a conversation with the Church News after she was sustained in the April 2017 general conference, she spoke of her first Relief Society calling, which came shortly after her move to Illinois.

“I was called to teach the mother education lessons. … It was a great opportunity to learn from the examples of other sisters as well as the manual,” she said.

Sister Bingham has taught many people since then in the community and the Church and, with a master’s degree in education, professionally. She has worked in schools with children who speak English as a second language and taught adults at the English Skills Learning Center in Salt Lake City. She has also served as a volunteer in teaching English as a second language. “I have always loved children and teaching,” she said.

Her love for children and teaching have been put to great use in the Church. As a Primary general board member and counselor in the Primary General Presidency, she has traveled to many places in the world, paying special attention to the situations and environments surrounding children.

Two children were born to Brother and Sister Bingham, and they claim as their own others whom they have fostered.

Service on the world stage

Just before she was called as Relief Society General President, she traveled to Uganda, where she visited with Church members in Kampala and went on to learn about humanitarian projects being run by the United Nations International Children’s Fund.

On April 13, less than two weeks after she was sustained as Relief Society General President, she addressed a faith-based panel discussion at the United Nations, expressing hope that faith-based organizations “will all work together through small and simple means to accomplish extraordinary things.”

During the annual “Focus on Faith” briefing, sponsored by the U.N. Department of Public Information, Sister Bingham spoke about the Church’s humanitarian efforts and expressed appreciation to all who are engaged in the “challenging but deeply rewarding work” of relieving suffering throughout the world” (see related story).

After she was sustained in her new calling, Sister Bingham said she hopes Relief Society sisters will recognize the goodness in one another. “It's a temptation, with the influences of the world, to compare ourselves with others, which is counter-productive and opposite of what Heavenly Father wants for us,” she said, noting that Relief Society is geared to help each sister develop an understanding of who she is in the eternal realm. “When we center our lives on Jesus Christ, we really know who we are,” she said.