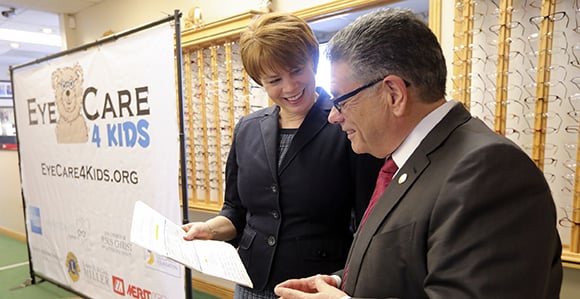 Sister Sharon Eubank, First Counselor in the Relief Society General Presidency of The Church of Jesus Christ of Latter-day Saints, delivers a donation check for more than $93,000 from the Church’s 2018 Light the World campaign to Joseph Carbone, president and founder of Eye Care 4 Kids, at Eye Care 4 Kids in Midvale, Utah, on Thursday, February 7, 2019.

“Anybody can do anything to help someone else. … We are all givers and receivers at the same time.” —Sister Sharon Eubank, First Counselor in the Relief Society General Presidency

The festive lights and ornaments were likely stashed away weeks ago—but the holiday season stretched into mid-February for a trio of Utah humanitarian organizations.

The Church of Jesus Christ of Latter-day Saints presented cash donations February 7 to the Utah Food Bank, Eye Care 4 Kids, and the Utah Refugee Connection. All the money was raised through Church-sponsored “giving machines” during its Light the World holiday service campaign.

If you visited the Joseph Smith Memorial Building anytime from late November through the end of December, you likely saw “giving machines”—those large, red vending machines where people donated money to purchase food, clothing, eyeglasses, medicine, livestock, or even sporting equipment to help families and individuals in need across the globe.

Other giving machines were placed in the Water Tower Plaza in Gilbert, Arizona; on the site of the Manhattan New York Temple in New York City; in the Hyde Park Visitors’ Center in London; and in the SM Mega Mall in Manila, Philippines.

On February 7, Sister Sharon Eubank, First Counselor in the Relief Society General Presidency, delivered checks to the Salt Lake-area organizations. She admits passing along the donated funds was a lot of fun. She knows many of her fellow Utahns would soon be the beneficiaries of the giving machines.

The Light the World campaign, she said, allowed legions to exercise their faith in Jesus Christ by serving others. The local donations were also reminders that charity-minded people in Utah need not travel to another corner of the world to serve others in need.

“Anybody can do anything to help someone else,” she said. “We are all givers and receivers at the same time.”

Sister Eubank began her afternoon by making a stop at the Utah Food Bank warehouse in South Salt Lake, where she presented the organization’s president and CEO, Ginette Bott, with a check for $163,718.

The “giving machine” gift will buy more than 600,000 meals, said Bott. “It will make a huge difference for multiple families—not just in Salt Lake, but across the entire state.”

Bott added she was uplifted knowing so many of the giving machine donors were children. A new generation of compassion is being built as young people discover the joy of caring for others.

Sister Eubank then moved on to the Midvale office of Eye Care 4 Kids, where she presented a donation of almost $94,000.

“We are humbled and grateful to the thousands who donated funds to this global project,” says Joseph Carbone, Eye Care 4 Kids founder and president. “We anticipate these funds will directly benefit nearly 4,000 children who desperately need glasses and, beyond that, will provide a new world of vision, understanding, and hope as these children see things more clearly for the first time.”

It’s estimated that one in four children need some kind of corrective eyewear.

The afternoon of giving ended at the Utah Refugee Connection headquarters, where Sister Eubank presented executive director Amy Harmer with a donation of more than $40,000.

The giving machine funds will provide the refugees—many who come from war-torn regions of Africa and the Middle East—with gas cards, bus passes, cleaning kits, diapers, and other essential items.

Harmer said the gift would help many in Utah’s growing refugee communities as they make homes in their new communities and connect with new neighbors.

Serving and befriending refugees who have settled in the Beehive State can be, at once, simple and life changing, she added.

“For many refugees, their most important need is a friend.” 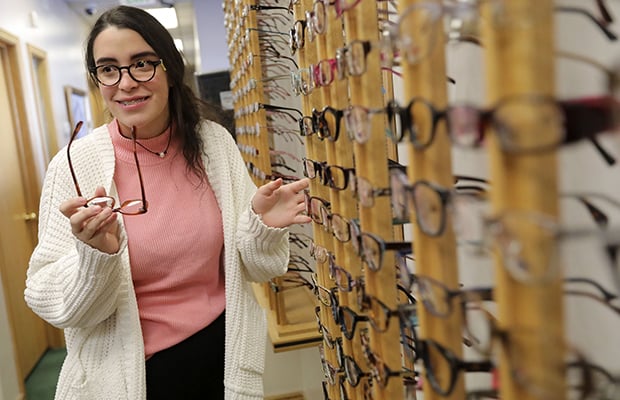 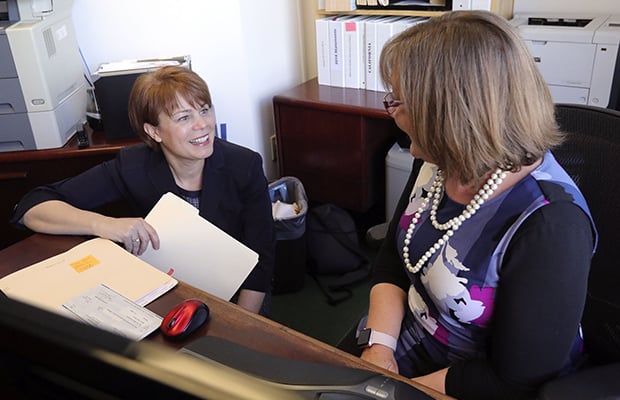 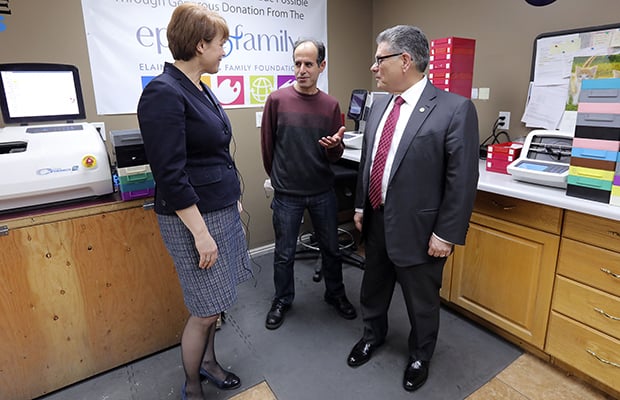