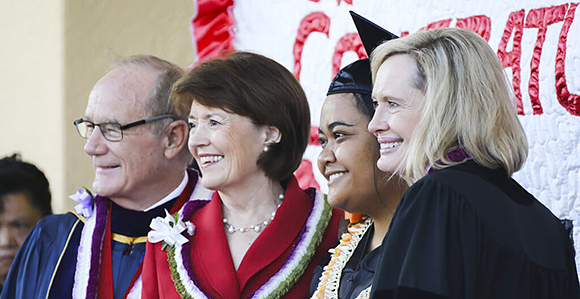 “Seeking Christ means inviting Him to be a part of all you do and then relying on Him to help you do it.” —Bonnie H. Cordon, Young Women General President

Two principles have deeply blessed the life of President Bonnie H. Cordon and provided her with joy, meaning, and purpose, despite the often uncertain twists and bends in the road of life.

One principle is to seek Christ first, prioritizing Him and His teachings. The second is to share the good tidings of the reality of His Atonement.

Speaking at BYU–Hawaii’s fall commencement ceremony on Friday, December 13, the Young Women General President told graduates they are among the few lucky enough to graduate during the Christmas season.

Christmas is “a magical time when people of many faiths seek Christ and share gifts with others as a symbol of our Savior’s ultimate gift,” President Cordon said.

Centering her commencement address around the story of the Nativity, President Cordon detailed how the Wise Men and the shepherds exemplify the two principles of seeking Christ and sharing His joy. She then extended an invitation to all who are about to commence the next step of their journey on the road of life to do two key things.

John S. Tanner, president of BYU–Hawaii, who also spoke at the commencement ceremony, explained that, similar to how Adam and Eve were never meant to stay in their garden paradise, the plan for students at the Church-owned school on the island paradise of Hawaii has always been for them to “venture forth into a wider world.”

The Lord wants His children to grow rather than “stagnate in Eden,” President Tanner said. “His plan, unlike Satan’s, is calculated to promote growth rather than merely restrain vice.”

But such growth requires all people not only to seek and learn of Christ and His plan but also to take action in following His plan by sharing and enacting it throughout their lives. 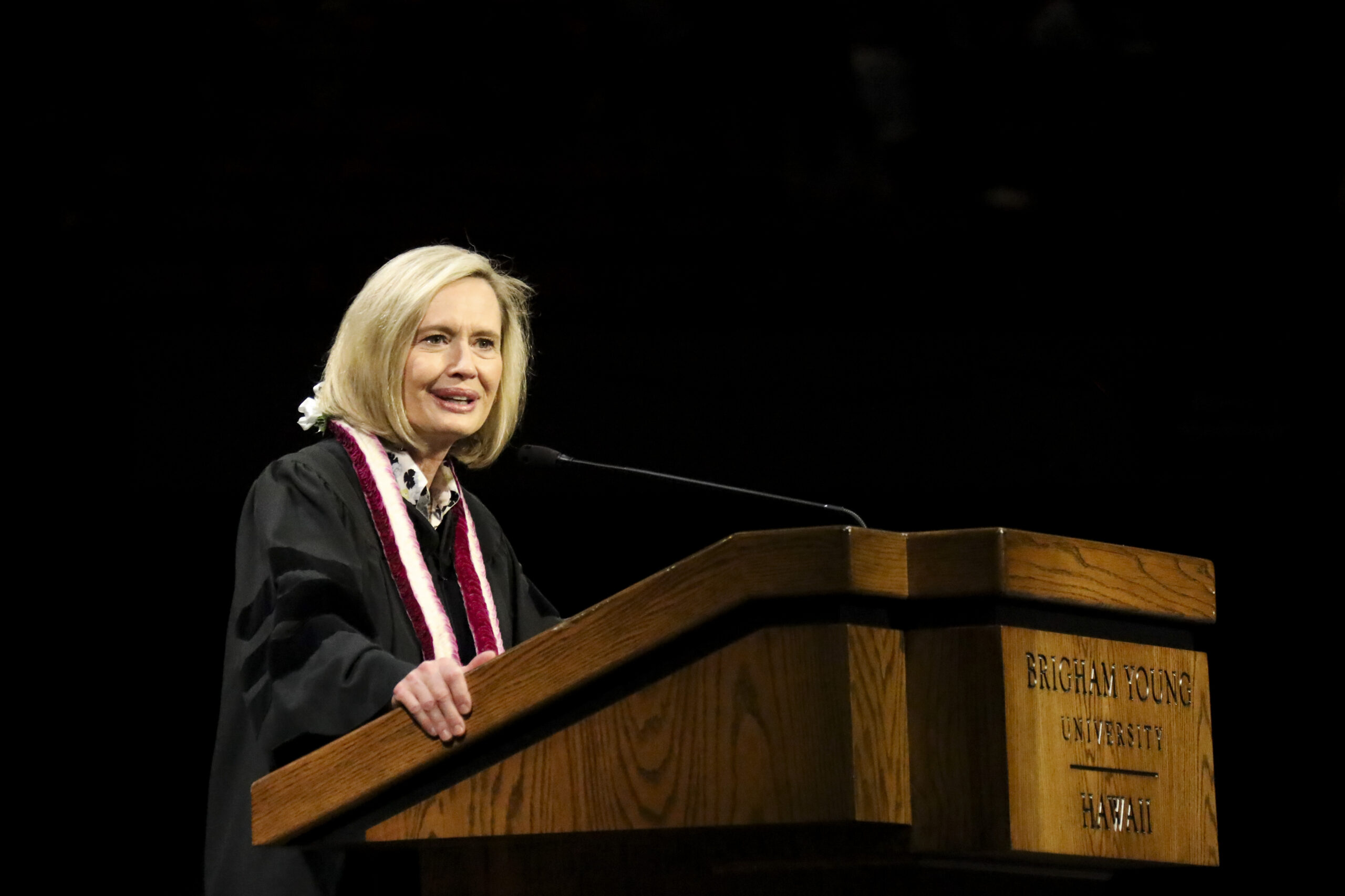 The Wise Men, President Cordon explained, were academics who studied diligently about the Messiah and knew the signs of His coming.

“When they identified the signs, they left their native country and traveled to Jerusalem, seeking Jesus Christ,” she said. “I love that once they saw the signs of His birth, they intentionally and immediately set out to find Him.”

In today’s world, distractions that will pull one’s attention away from the Savior are constant, President Cordon explained.

“Without having real intent and determination, our plans to seek Christ can quickly be overcome by the dings, rings, and vibrations coming at us from every direction and device,” she said.

Rather than allowing such distractions to pull attention away from the Lord, the students were urged to start every day with the Lord by intentionally setting aside time to spend with Him, learning of Him.

“Learn to cultivate those sweet, sweet moments when your Heavenly Father can teach you truths relevant to your current circumstances,” she said, encouraging all to intentionally start each day by communicating with the Lord. “As you ‘keep this sacred appointment with exactness,’ your ability to hear the voice of the Lord will increase.”

Like every concerned parent, the Lord is interested in everything that matters to His children, she continued. “Seeking Christ means inviting Him to be a part of all you do and then relying on Him to help you do it.” 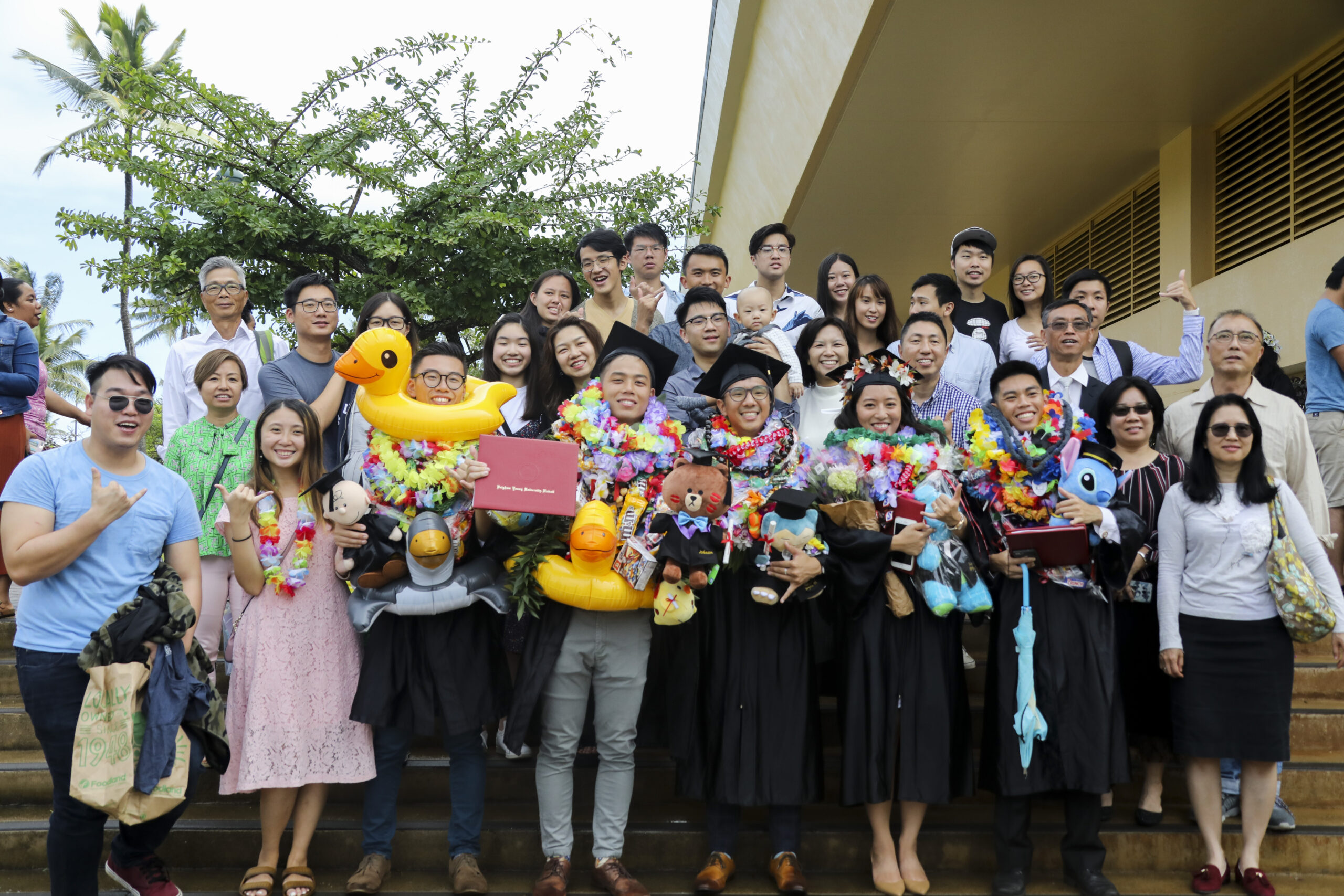 Graduates of BYU–Hawaii pose for a photo with friends and family following the 2019 fall commencement ceremony in Laie, Hawaii, on December 13, 2019. Photo by Monique Saenz, BYU–Hawaii Photo.

Like the Wise Men, the shepherds of the Nativity story also went immediately to find Christ, President Cordon said, continuing her explanation of the two principles. “But the scriptures go on to tell us that the shepherds became witnesses of Christ.”

Seeking to share the “joy of their hearts and the compassion in their souls” after finding the Christ child, the shepherds did not “share good tidings of great joy” out of a sense of obligation or duty, President Cordon said. “From them we can see the need to come and see, then go and do.” 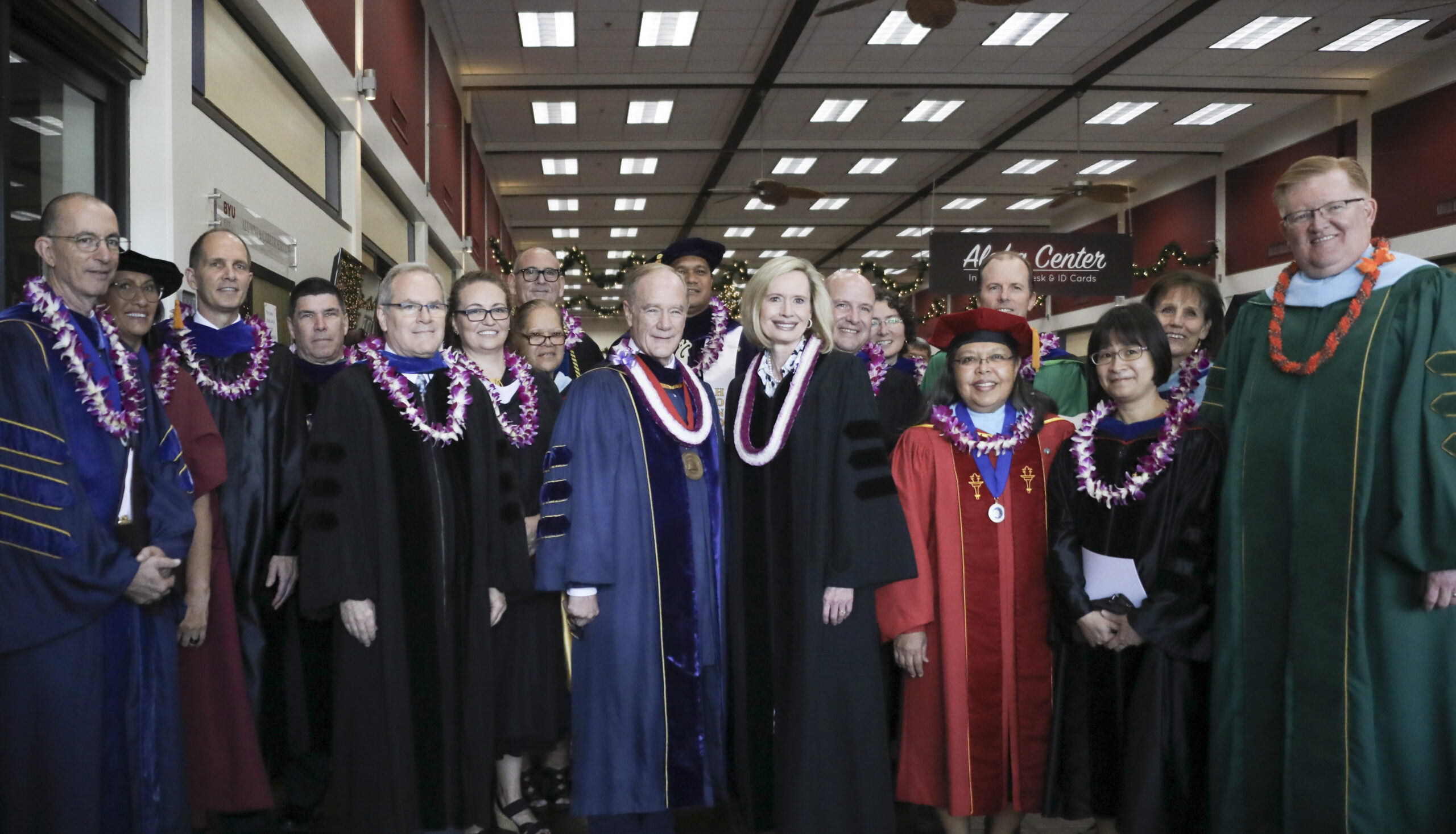 As President Tanner explained, “To know the truth is vital. . . . But knowing truth is not enough.”

In addition to simply knowing the Savior, there is the expectation that “you must ‘add deeds’ answerable to your knowledge,” he said. “And even more than deeds, you must add godlike character traits—such as faith, virtue, patience, temperance, and love.”

For those who are about to “commence” the next phase of their Christ-centered journey, President Cordon shared her hope that each individual will “not only reach up and seek Christ, but I hope you will reach out to those the Lord puts in your path to serve, lift, and bless as He would.” 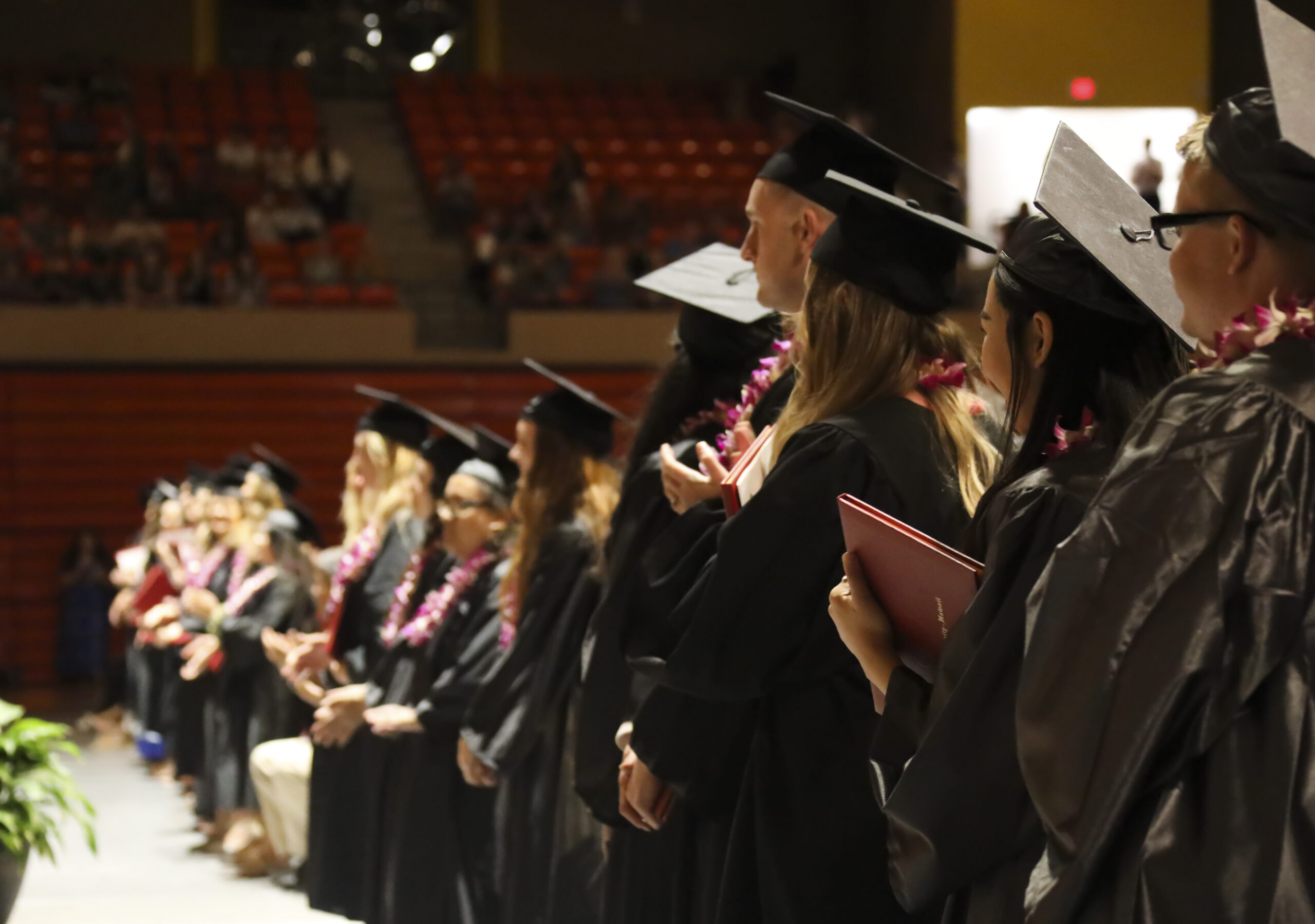 Graduates of BYU–Hawaii stand with their diplomas in hand at the 2019 fall commencement ceremony in Laie, Hawaii, on December 13, 2019. Photo by Monique Saenz, BYU–Hawaii Photo.

Sharing the story of the good Samaritan, President Cordon explained that the difference between the Samaritan and the others who traveled the same road came in their decisions to act with compassion or to simply continue on. Of the three travelers mentioned in the biblical story, only the Samaritan acted, by stopping to help the man on the side of the road, President Cordon said. “My hope is that we will witness of Christ in both our words and our kind actions of compassion towards others. I believe compassion is kindness with a vision—a vision of turning people to Christ so they may have full access to His atoning sacrifice.”

At the conclusion of his address, President Tanner echoed President Cordon’s call for charity and compassion.

“Here in Hawaii, you have learned another name for charity. It’s called ‘aloha,’” he said. “I hope and pray that you will take a spirit of aloha with you wherever you go. Then you will possess a paradise within you happier by far and more enduring than what any a garden island can provide. And by incorporating in your soul the spirit of aloha, or pure love of Christ, you will make the world more paradisiacal wherever you go.”

During the commencement ceremony, President Tanner presented 218 degrees to graduates from 19 different countries with ages ranging from 20 to 59 years old. 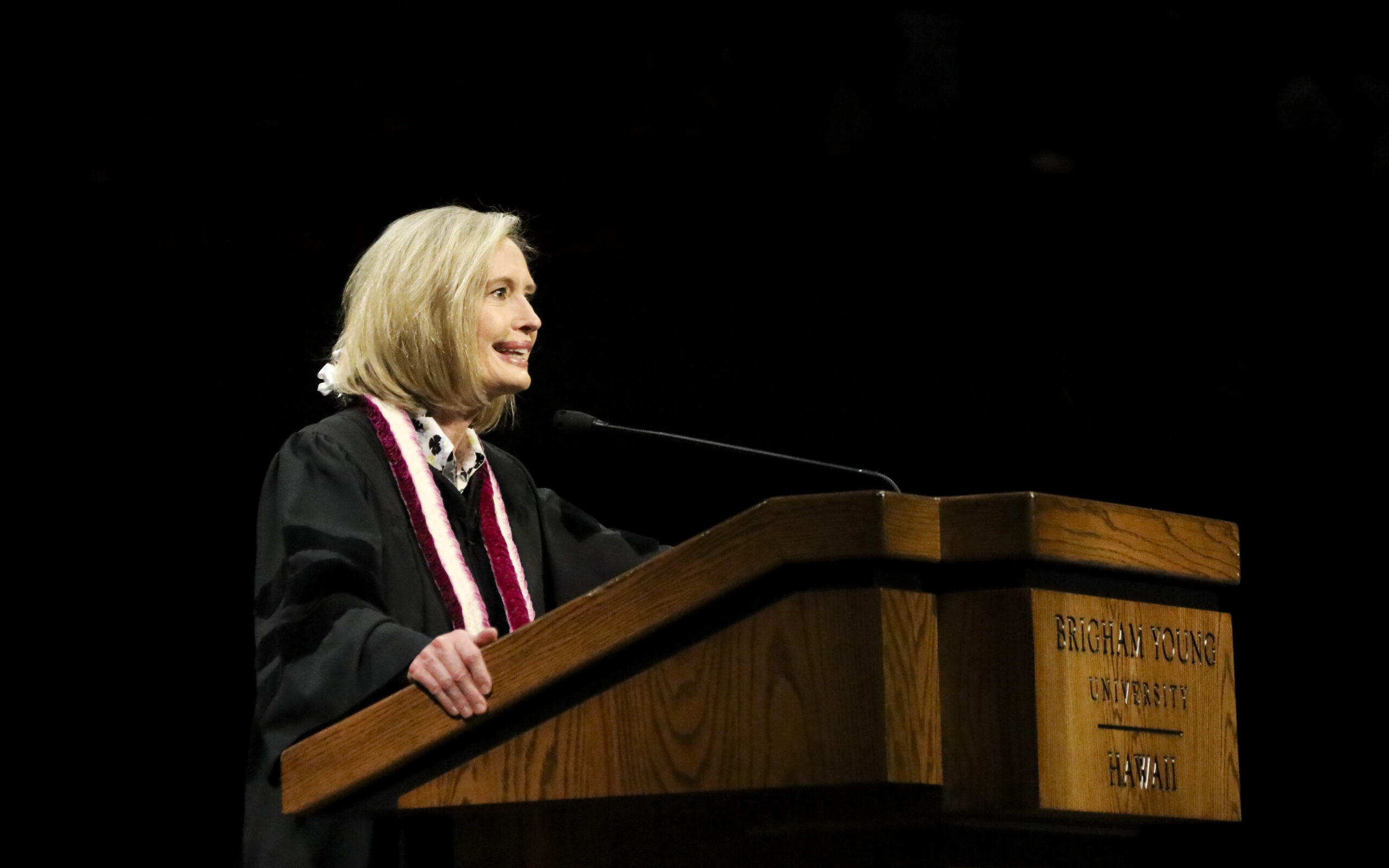