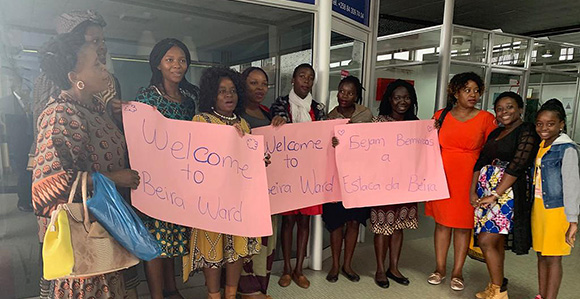 “I learned so much from all of them. They are constantly ministering, teaching, and testifying.” —Sister Lisa L. Harkness, Primary General Presidency

Looking out over a crowd of women in Cape Town, South Africa—women of all ages and all colorfully dressed—Sister Lisa L. Harkness felt impressed to hum a simple hymn. After just the first few notes of “We Thank Thee, O God, for a Prophet,” a swell of music rose around her, encompassing her and overwhelming her quiet hum.

“As soon as I started, the whole congregation of women burst out singing,” Sister Harkness said. “And in Africa, when they sing, it’s all around you. It encompasses you. It fills your soul, it heals you, and it testifies at the same time. When they started singing, we were all filled with the love of God.”

The powerful experience, Sister Harkness said, in many ways is representative of her whole experience there.

In her role as First Counselor in the Primary General Presidency, Sister Harkness joined Sister Bonnie H. Cordon, Young Women General President, for a 12-day visit to the Africa Southeast Area from May 16-28.

Sister Harkness said she experienced countless evidences of Heavenly Father’s love for His children as she and Sister Cordon spent nearly two weeks traveling across the southern section of the continent. They trained leaders, spoke at devotionals, and met with members and missionaries.

Recalling the whirlwind visit, Sister Harkness said she was impressed by the strength of the members and their love for God in each of the various countries and cultures.

“The Church is young there, very young,” Sister Harkness said. “But the leadership is valiant, awesome, and powerful.”

During the 12-day trip, the two women leaders’ schedules overlapped in only a few places. Sister Harkness and her husband, David Harkness, visited South Africa, the Democratic Republic of the Congo, and Madagascar; in addition to South Africa and the DR Congo, Sister Cordon and her husband, Derek Cordon, also visited Mozambique.

At each location, the women leaders were accompanied by members of the area presidency.

“These wonderful sisters crisscrossed an area larger than the United States,” said Elder S. Mark Palmer, president of the Africa Southeast Area. “They surely went home physically exhausted but everywhere they went they loved, inspired, laughed, wept, and provided encouragement and powerful teaching that will bless us all.”

A simple, pure form of the gospel

The gospel is young in many parts of Africa, Sister Cordon explained, but the benefit of that is being able to “see the gospel in a simple, pure form of doctrine from our Savior, Jesus Christ.”

The people don’t have set notions of how things are supposed to be, Sister Cordon explained.

“The people there are anxious to receive the miracles that the Lord has for them,” she said.

Sometimes, members of the Church think that the blessings or miracles from the Lord have to come in a specific way, or they assume God hasn’t blessed them. “But [in Africa], they recognize how God blesses them, however the blessings come. They are a really great example for us.”

Using the youth as an example, Sister Cordon said, “They love the gospel so much that they want to share it. They don’t hesitate to invite others to come and see and experience it.”

By being willing to stand out, the youth have become a light and a beacon for their friends and families, particularly when their parents or other family are not members, she said.

Sharing her experience from a home visit in Maputo, Mozambique, Sister Cordon described how a young girl shared a powerful personal testimony of the gospel and expressed an immense gratitude for her father, who had persisted in trying various churches until finding the gospel.

“As we sat in their home,” Sister Cordon said, “I felt the Spirit as she expressed her love for Heavenly Father and testified of Jesus Christ. We went to minister to her but with her strong spirit and her vision of who was, she ministered to us.”

“That’s the youth,” she said. “They know how to look outward. And they may not have much for material wealth, but they have in abundance what really matters.”

In many places throughout the area, the Primary classes on Sundays are filled with young children who attend of their own accord, Sister Harkness added. Despite some children having no members in their families, they continue to show up each week.

“The first purpose of Primary is to help children feel the love of their Heavenly Father,” Sister Harkness said. “And that is happening all throughout Africa. That is evidenced because the children are coming and being welcomed and accepted by the children, the teachers, and the leaders.”

Sister Harkness also described how, at each location they visited, the area presidency is fully engaged with the people and with spreading the gospel.

“I learned so much from all of them,” she said. “They are constantly ministering, teaching, and testifying. We didn’t go anywhere where they weren’t teaching the gospel, reaching out, getting referrals, talking to people, and inviting them to come to Church. And then some of them would call the missionaries right away, to give them referrals. Everywhere we went, the area presidency was training and teaching and loving and ministering to young leaders, by example and word. It was so impressive to see.”

Sister Cordon added: “They are so united, and I think it’s really helpful in this area because of its diversity.”

A wealth of faith

Circumstances in Africa are often difficult, Elder Palmer noted, and during their time there both Sister Cordon and Sister Harkness witnessed some of the challenges members face.

In Beira, Mozambique, a devastating cyclone destroyed hundreds of thousands of houses in March this year. The Church and other humanitarian organizations have been working together to help rebuild the area, but many people have been sleeping without shelter or in makeshift tent cities, Sister Cordon said.

“They came with freshly washed clothes and smiling faces,” she said. “And we laughed and cried together.”

One woman, who Sister Cordon said she felt blessed to have met, had a new baby just before the cyclone hit.

After fleeing her house, which fell down in the storm, the woman ran through wind and rain, carrying her new baby to safety, Sister Cordon said. “When we sat together, she bore testimony of how the Lord helped protect her.”

Even in the depth of trials, the Saints know where to turn, Sister Cordon added. “They know to turn to their loving Heavenly Father and their Savior, Jesus Christ.”

Everyone has their unique challenges, she said, but being with the people in Mozambique reminded her that challenges in this life that can be faced by turning in faith to the Savior.

It may not take the challenge away, Sister Cordon said, but “you’ll feel supported and comforted, and you’ll have a peace that the world cannot give you.”

Sister Harkness added that although there is profound poverty across the Africa Southeast Area, there is also a wealth of faith.

“They know that they are children of Heavenly Father and that He loves them. I had only to look into the eyes of the people to see their divinity and to see their potential. Just seeing them and talking with them, I could see and feel [God’s] love for them.”

Mortal experiences differ from place to place, country to country, neighborhood to neighborhood, and family to family. But what unites people and unifies them—in churches and in families—is that they are all Heavenly Father’s children, “and the same precious blood was spilt to bring us all home,” she said. 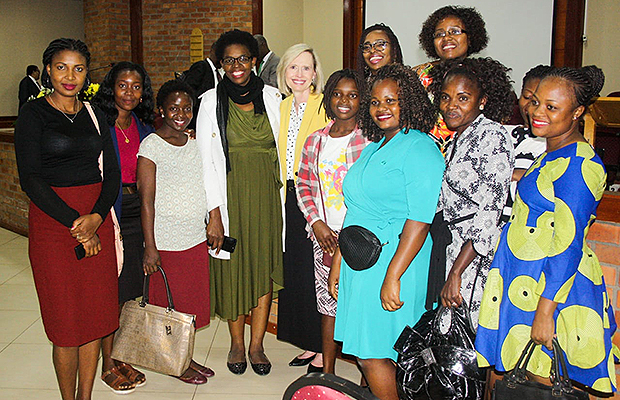 The power of women

While in Kinshasa, Sister Harkness met with Chantal Safu Lopusa, the minister of Gender, Children, and Family and one of the few women in government in DR Congo. The two women, along with other representatives from the Church, met to discuss their shared interest in protecting women and children.

“We talked about how we can work together to help and protect children and women in that country. And a really good relationship was formed,” Sister Harkness said. “She’s very powerful, a very influential woman.”

Elder Joseph W. Sitati, the first counselor in the Africa Southeast Area presidency, accompanied Sister Harkness to the meeting. “As I watched their interaction together, it was clear to me that these two women leaders were both, as it were, drawn from the same refining pot of a global experience which drew them together through a shared cause of helping to preserve and lift the best hope for mankind—the family,” he said. 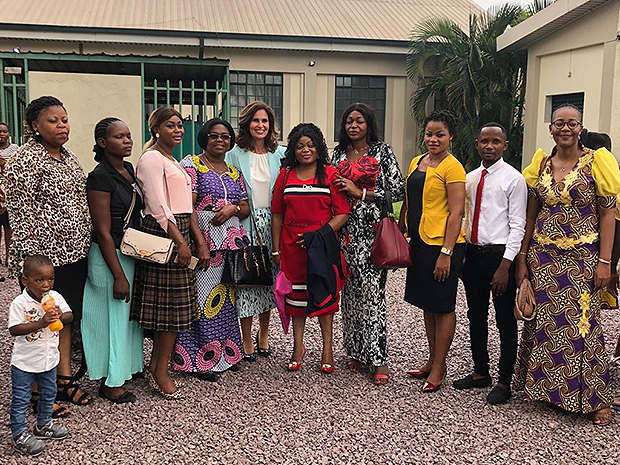 Members in Kinshasa, Democratic Republic of the Congo, gather for a photo after a Sunday meeting with Sister Lisa L. Harkness in May 2019.

Additionally, on May 26, a Sunday devotional with Sister Harkness was held for women in Kinshasa. Around 1,700 women attended the event and as Sister Harkness described it, the meetinghouse looked fit to burst as women crammed into every possible seat available. Sister Harkness recalled Elder Sitati telling her that it was perhaps the largest gathering of Latter-day Saint women ever in the DRC.

“The women had come on buses from all over Kinshasa and they were practically sitting on top of one another. The younger girls were sitting on their mothers’ laps, teenagers were all wedged in together, and they put extra chairs in the aisles. Women were leaning out the open windows and sitting in the foyer and every room throughout the whole building,” Sister Harkness said.

But the thing that stood out the most was the power and stature of the women.

“Everywhere we went, I was so impressed by the women,” Sister Harkness said. “They are a powerful force for change in their communities, so when they learn the gospel, those women are going to change their countries. Just their mere presence was so powerful.”

Elder Joni L. Koch, Second Counselor in the area presidency, said it was clear that the women and members in the area were grateful for the opportunity to interact with the women leaders.

Elder Palmer added, “The way Sister Cordon and Sister Harkness connected with the sisters in our area was quite remarkable. There was an instant bond, and the local auxiliary leaders were overjoyed to receive beautiful instruction that will help them in their callings.” 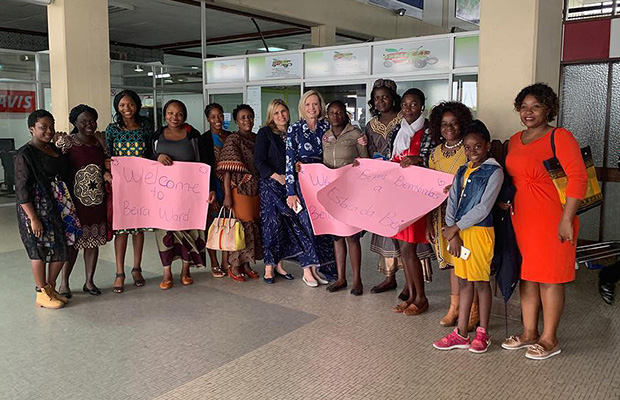 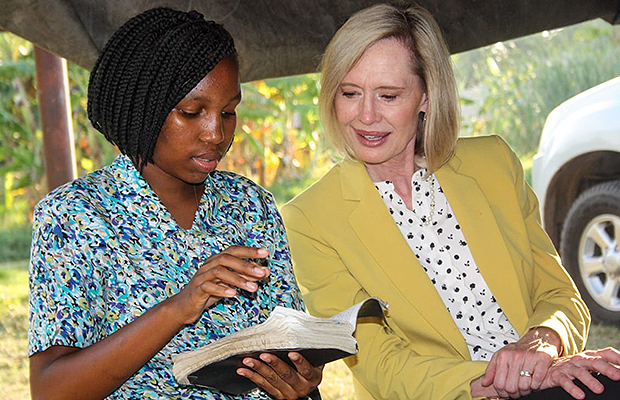 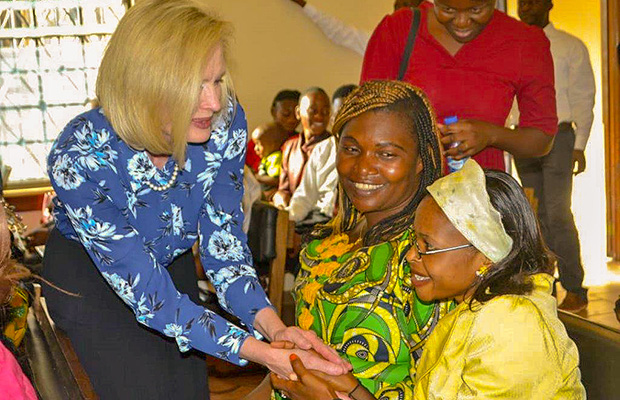 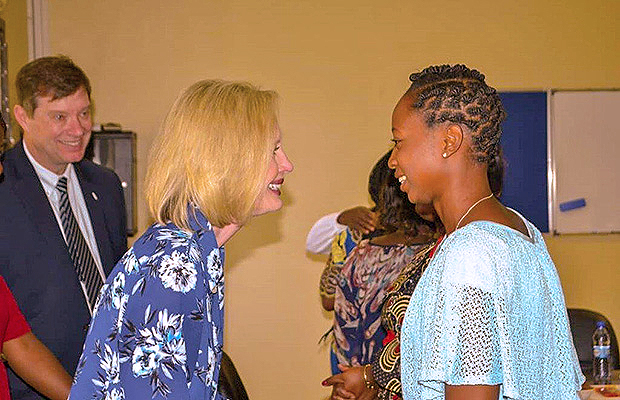 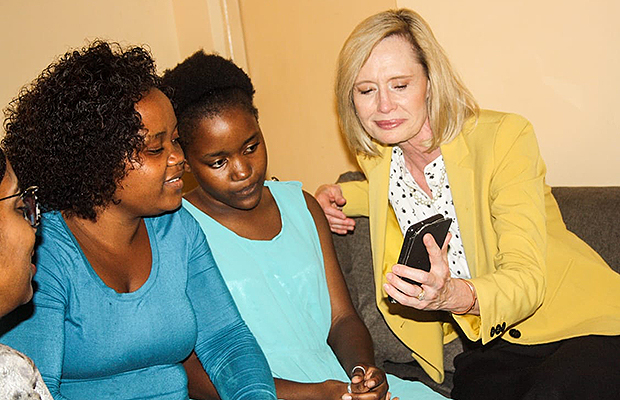 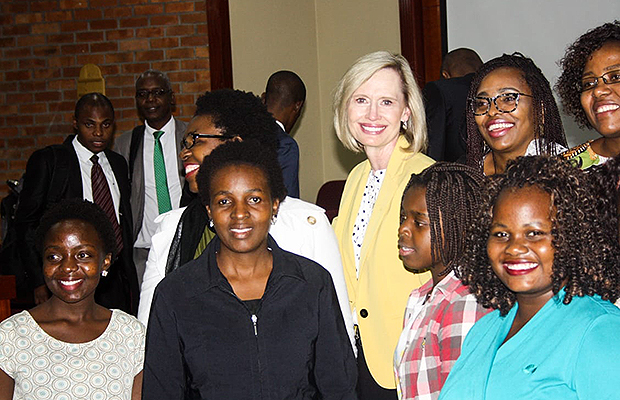 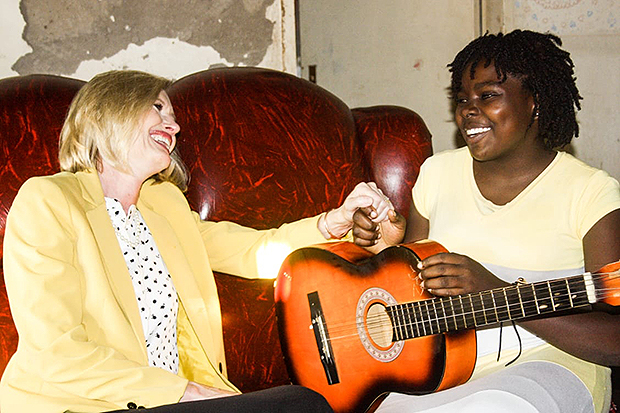 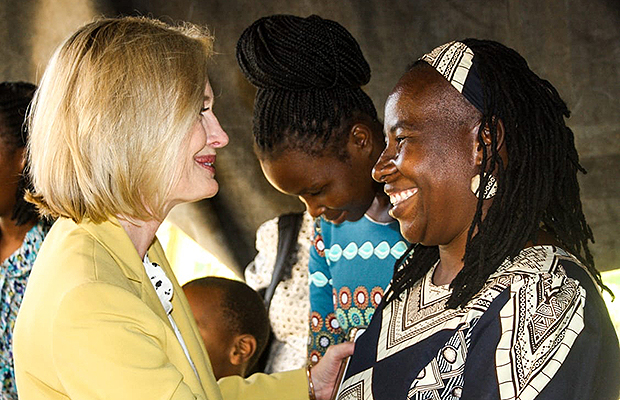 Sister Bonnie H. Cordon meets with a member in Maputo, Mozambique, during a ministering home visit in May 2019. 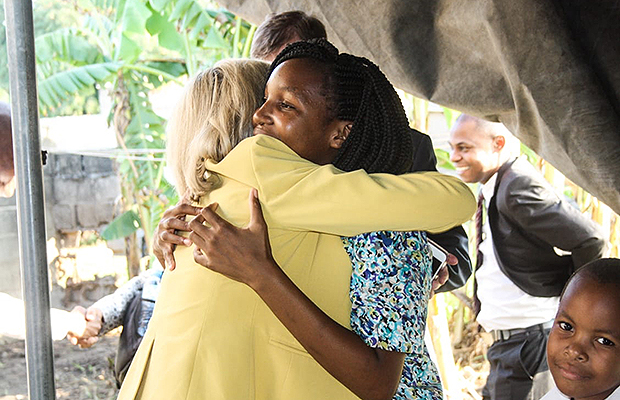 Sister Bonnie H. Cordon hugs a member in Maputo, Mozambique, during a ministering home visit in May 2019. 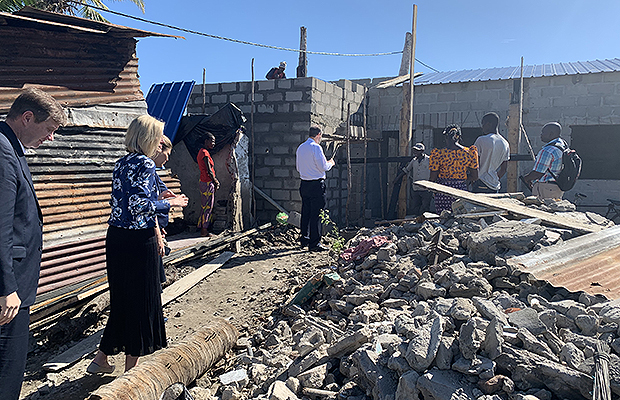 Sister Bonnie H. Cordon visits the sites of member homes that were destroyed in a recent cyclone in Beira, Mozambique. 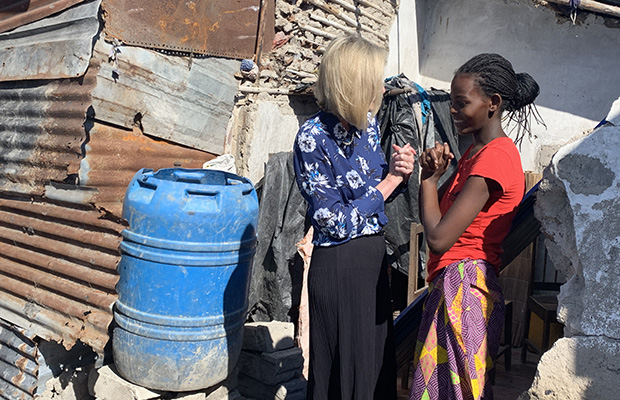 Sister Bonnie H. Cordon speaks with a young girl in Beira, Mozambique, while visiting the homes of members that were destroyed in a recent cyclone in the area. 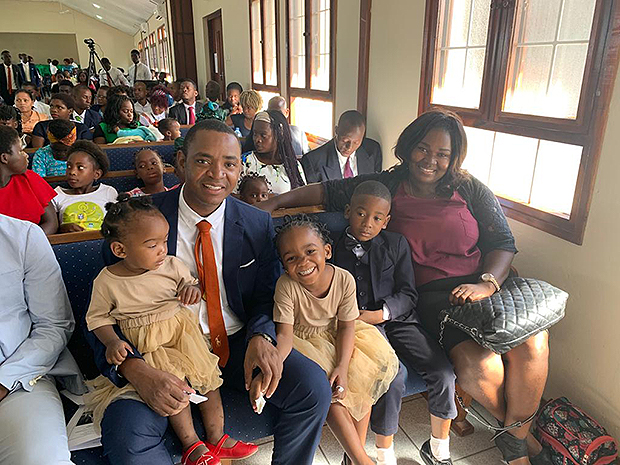 Members in Beira, Mozambique, pose for a photo during a meeting with Sister Bonnie H. Cordon in May 2019. 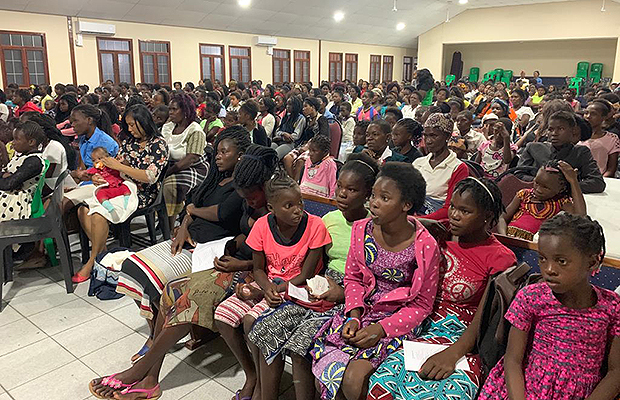 Members in Beira, Mozambique, gather for a meeting with Sister Bonnie H. Cordon in May 2019. 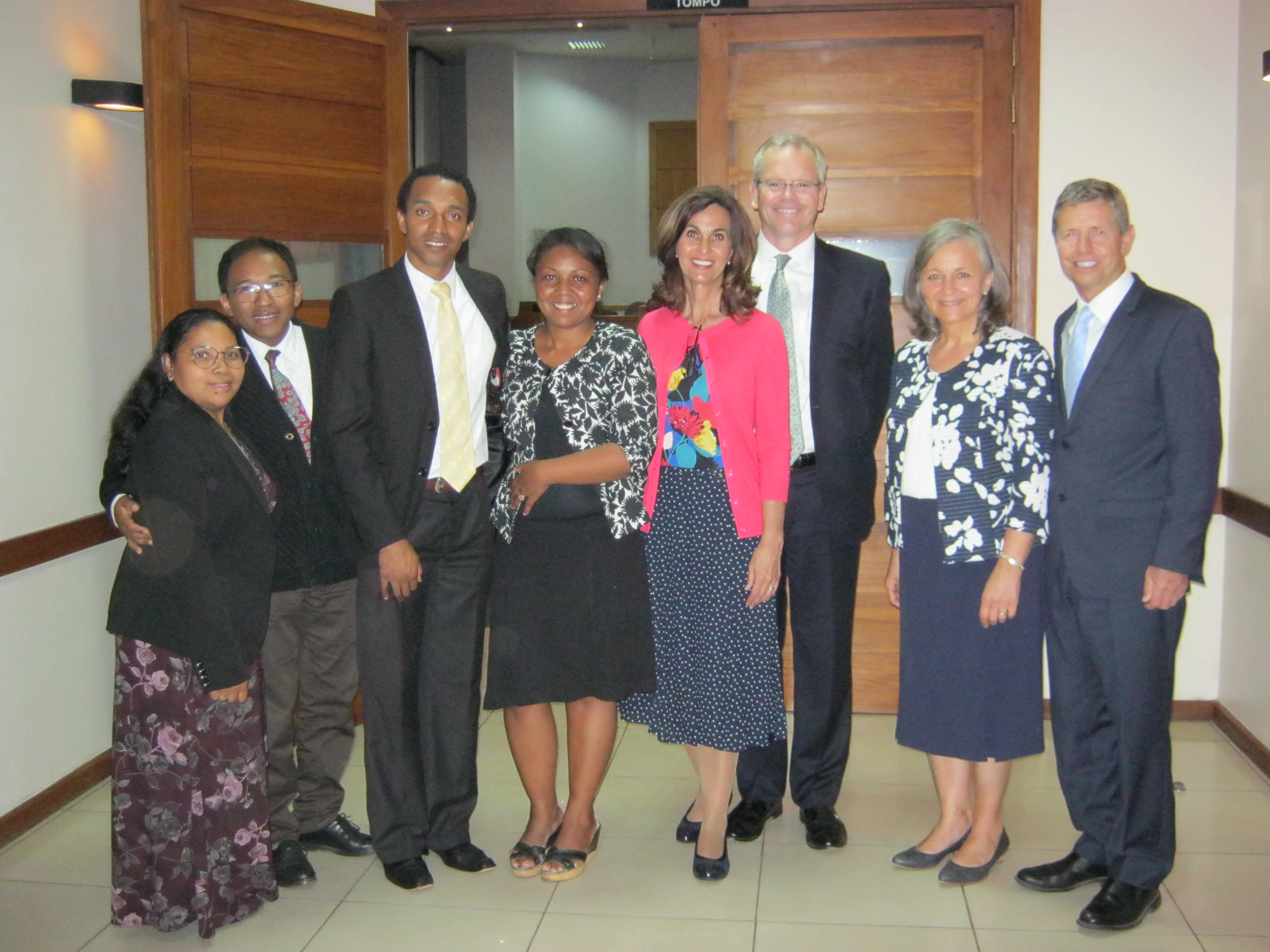 Sister Lisa L. Harkness, First Counselor in the Primary General Presidency, fourth from right, with her husband, David Harkness, are joined by Elder S. Mark Palmer, right, Africa Southeast Area President, and his wife, Sister Jacqueline Palmer, in a photo with leaders and wives in Madagascar. 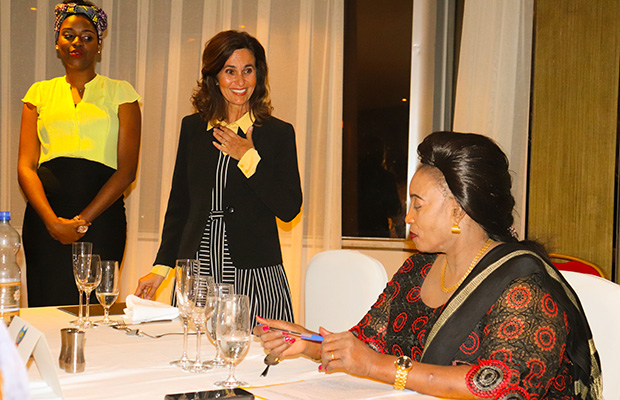 Sister Lisa L. Harkness, First Counselor in the Primary General Presidency, stands during a dinner meeting with Chantal Safu Lopusa, the minister of Gender, Children and Family in the Democratic Republic of the Congo. 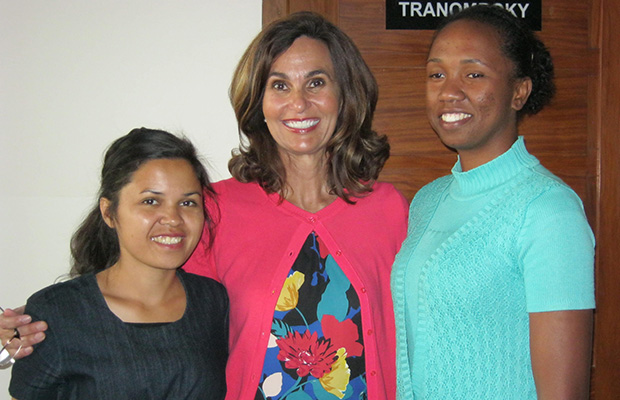 Sister Lisa L. Harkness, First Counselor in the Primary General Presidency, poses for a photo with members in Madagascar. 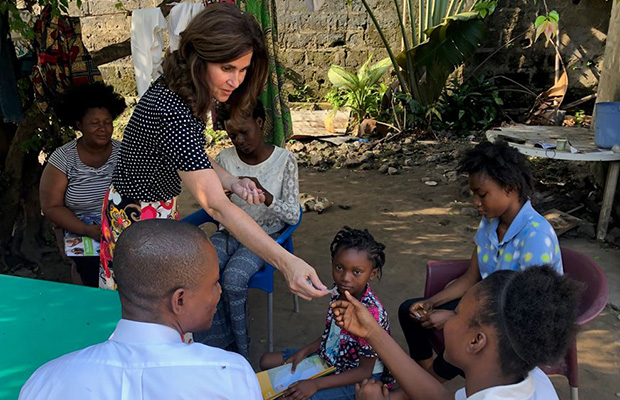 Sister Lisa L. Harkness visits with members during a ministering home visit in Kinshasa, Democratic Republic of the Congo, in May 2019. 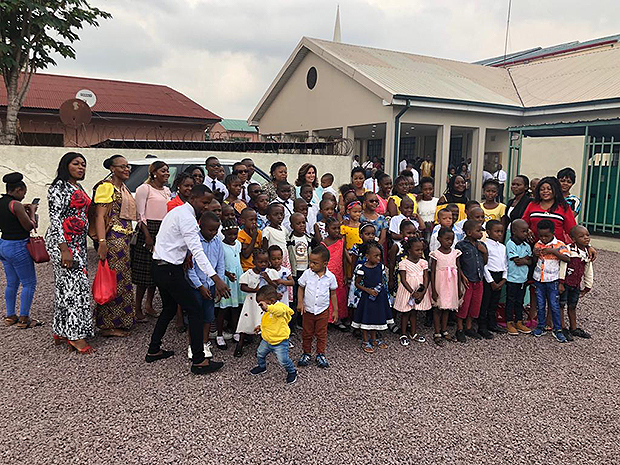 Members in Kinshasa, Democratic Republic of the Congo, gather for a photo after a Sunday meeting with Sister Lisa L. Harkness in May 2019.