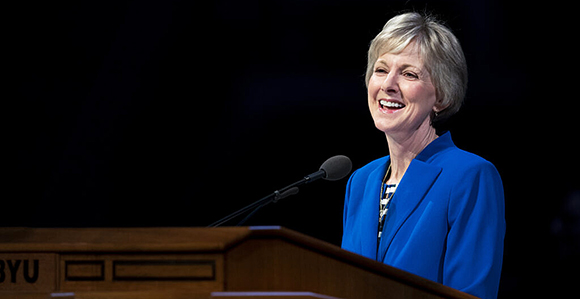 Sister Jean B. Bingham speaks at a BYU campus devotional in the Marriott Center in Provo, Utah, on December 10, 2019. Photo by Tyler Richardson, BYU Photo.

“With His ability to see and know and understand all things past, present, and future in a higher and broader and deeper way than we possibly can, His perspective is complete.” —Sister Jean B. Bingham

Perspective is an interesting phenomenon, said Sister Jean B. Bingham, looking up at the climbing rows of some 3,600 students gathered in the Marriott Center on Brigham Young University’s Provo, Utah, campus on Tuesday, December 10.

“Depending on our position or what instruments we use, what we are looking at seems to change, often dramatically,” continued the Relief Society General President, looking simultaneously small standing at the podium centered on the arena floor and larger than life as her face was projected onto the massive video screens hovering above the arena floor.

“Perspective can also be a particular attitude toward something, or a point of view,” she said to those gathered for the final campus devotional of the fall semester. “Looking at a situation through the lens of our own experiences, we tend to suppose that our perspective is the ‘right’ one and discard other viewpoints as flawed or incomplete.”

More often than not, however, any single viewpoint or perspective doesn’t give the whole picture, or the whole truth, she explained. Instruments like telescopes and microscopes allow people to see things they couldn’t see with their eyes alone. But both have a narrow scope that also limits one’s viewpoint, she explained.

However, the one viewpoint that makes everything clear, Sister Bingham continued, is the perfect and all-encompassing perspective of Heavenly Father—His eternal perspective.

“With His ability to see and know and understand all things past, present, and future in a higher and broader and deeper way than we possibly can, His perspective is complete,” she said. From His vantage point, God can see divine potential rather than just a present or past condition.

Heavenly Father also looks at all His creations through the lens of love, Sister Bingham continued. “As if using a powerful microscope, He sees into the heart and mind of each of His children from a perspective of loving mercy and eager support rather than hope-crushing criticism. And with a range more complete than the most powerful telescope, He sees the big picture, viewing progress in individuals as well as galaxies from all eternity to all eternity.”

During this mortal life, each person is faced with daily challenges that can seem, at times, overwhelming. As individuals face their personal challenges, their limited perspective can often lead them to feel distracted and discouraged.

So “how do we find joy while experiencing these daily and sometimes hourly trials and tribulations?” Sister Bingham asked.

The answer, she said, begins with embracing an eternal perspective.

She then listed five keys to keeping an eternal perspective that can help individuals progress and be happy regardless of their circumstances.

1. Knowledge of and faith in God’s plan of happiness

The first key is understanding one’s divine identity as the foundation of their progress and happiness, she explained. “When we know who we are, why we are here, and where we want to go, we can make choices that bring the greatest happiness and avoid the most pain and anguish, both now and in the eternities.”

The divine worth of each individual on earth is absolute because of his or her divine parentage, she explained.

When individuals come to know that God’s perspective includes things as they were, are, and are to come, they are assured that their value is unchanging, Sister Bingham said.

“Because of the choices you made premortally, you have an essential role in God’s plan of happiness at a very significant time in the history of the world. Your Heavenly Parents prepared you to come to earth with those truths embedded in your spirit, and you and I were excited to try to become like Them. We saw Their happiness and instinctively wanted that same joy,” she said. “After all, that is what we were created for: ‘Men [and women] are, that they might have joy’ (2 Nephi 2:25)”

2. Trust and confidence in Jesus Christ and His Atonement

The second key is having trust and confidence in the Savior and the reality of His infinite Atonement, which allows everyone to progress eternally, Sister Bingham continued.

“Even after we get started on the covenant path, all of us have a tendency to meander to the edge of the road or to step or stumble off,” she said.

Although all may stumble and lose their way at times, the “joyful truth is that because of the Atonement of Jesus Christ, none of us is eternally lost,” she said.

The Savior did, in reality, atone for the sins of all mankind and provide a perfect example for how to live in this mortal period with the reassurance that “we can, indeed, become more like Him, feel joy in this life, and eventually return to our heavenly home,” she said.

“Our Savior has a ‘distance view,’ too; He sees us ‘yet a great way off’ and meets us there, ready to heal and forgive, comfort and encourage, as we come to Him in our difficult trials,” Sister Bingham said. “With His help, we can overcome adversity, withstand temptations, and progress on the path back to our Heavenly Parents.”

Even with the Savior’s gift of mercy, however, “in order to really progress, we must be intentional,” Sister Bingham continued, highlighting the third key.

Starting with an understanding of one’s divine identity and purpose—which she added each individual has a responsibility to learn about—individuals must plan to grow and progress in the ways of the Lord, she explained.

Human nature often leads individuals to repeat mistakes and cling to “erroneous philosophy” until they become convinced that they know better than their Father in Heaven. But even such mistakes can become learning opportunities when individuals understand their divine purpose and choose to change in the ways that allow them to follow the Savior, Sister Bingham explained.

“Unlike our growing physically, we do not mature spiritually unless we are willing to change and move to a higher, holier way of living,” she said. Following the example of Christ and becoming more like Him is a process that involves taking responsibility for one’s actions, looking for and planning ways to contribute to the happiness of others, and keeping commitments to both God and man.

Once a plan is in place, the next key is to prioritize. “Regardless of the nature of your challenges, looking at them with an eternal perspective will help you understand the right priorities,” Sister Bingham said. “Putting things in perspective is a valuable skill that allows us to progress in the midst of sometimes confusing information or conflicting viewpoints. It helps us understand what is important and what is not.”

When individuals have an eternal perspective, that viewpoint becomes a tool to determine their direction, even when worldly signs may be pointing the wrong way, she said. “An eternal perspective gives us a more complete picture based on truths that do not change with time.”

One way to help prioritize is to ask God, “What should I be about?” Sister Bingham continued. “His answer will no doubt be instructive to you. Take the time to ask and ponder, discover what is of highest priority, and then use your time accordingly. The Lord has promised that when we do the most important things first, the other things will be accomplished in the right time and order.”

Because God loves His children, He will help them to see the errors they have made and, from there, “we can choose to change and improve and thereby actually be happier than if we had continued down the original easier but damaging path,” Sister Bingham said.

Once planning and prioritizing have set the direction of an individual on the path of eternal progression, the next step is to act in faith.

“You may be hesitant to move forward, thinking that you will make mistakes—and you are right, but stepping forward is the only way we can progress,” Sister Bingham said.

Spiritual progress takes time and attention to details, as well as patience and persistence, she continued. Even with the Lord’s help, everyone will make mistakes. But the Savior is there “to help us learn how to do and be better. We don’t have to be perfect; what matters is our effort. Our Heavenly Father doesn’t expect perfection from us in this life, but He does expect us to keep trying.”

With every act of faith and every step toward the Lord, one’s eternal perspective will become clearer.

“Like a simple magnifying glass that brings things into focus using the light of the sun, the gospel of Jesus Christ will bring your life into focus with light from the Son of God, our Savior and Redeemer,” Sister Bingham said. “He looks at all His creations with the light of love, knowing that love melts differences, softens heartache, lessens pain, lifts spirits, and empowers progress.”

It was interesting to see how Sister Bingham demonstrated various perspectives with photos of bird’s-eye views of cities as well as close-up street views, Thompson noted.

“And what caught my attention was it kind of seems like the eternal perspective captures all of those different ones,” he said. “So it’s not that the eternal one is uniquely right over all the other ones, but it incorporates all the different perspectives that each individual might have.”

In everyday life, it is easy to get caught up in the day-to-day and lose sight of a bigger perspective, he said, adding that it is important to be “willing to step back and see the big picture and realize that the little things don’t matter as much as they might seem to.”

For BYU freshman Emily Lefler, Sister Bingham’s message was an important reminder to not sweat every little decision, like picking a major and a future career path.

“I definitely felt it was super helpful to me personally because I am undecided still, so I’m trying to figure out what I want to do with my life,” she said. “Having the reminder to have a more rounded view of where I’m going beyond just this life is comforting to know that not everything depends on my career—there’s more to it than that.”

Lefler said she was grateful for the reminder to be patient with the Lord but to also be persistent in working toward her goals.

At the conclusion of her address, Sister Bingham promised that following the five keys for keeping an eternal perspective would help individuals to overcome their individual challenges in life and feel indescribable joy. In doing so, she said, “You will be guided and blessed, lifted, and strengthened to follow the covenant path that leads to becoming your very best eternal self.” 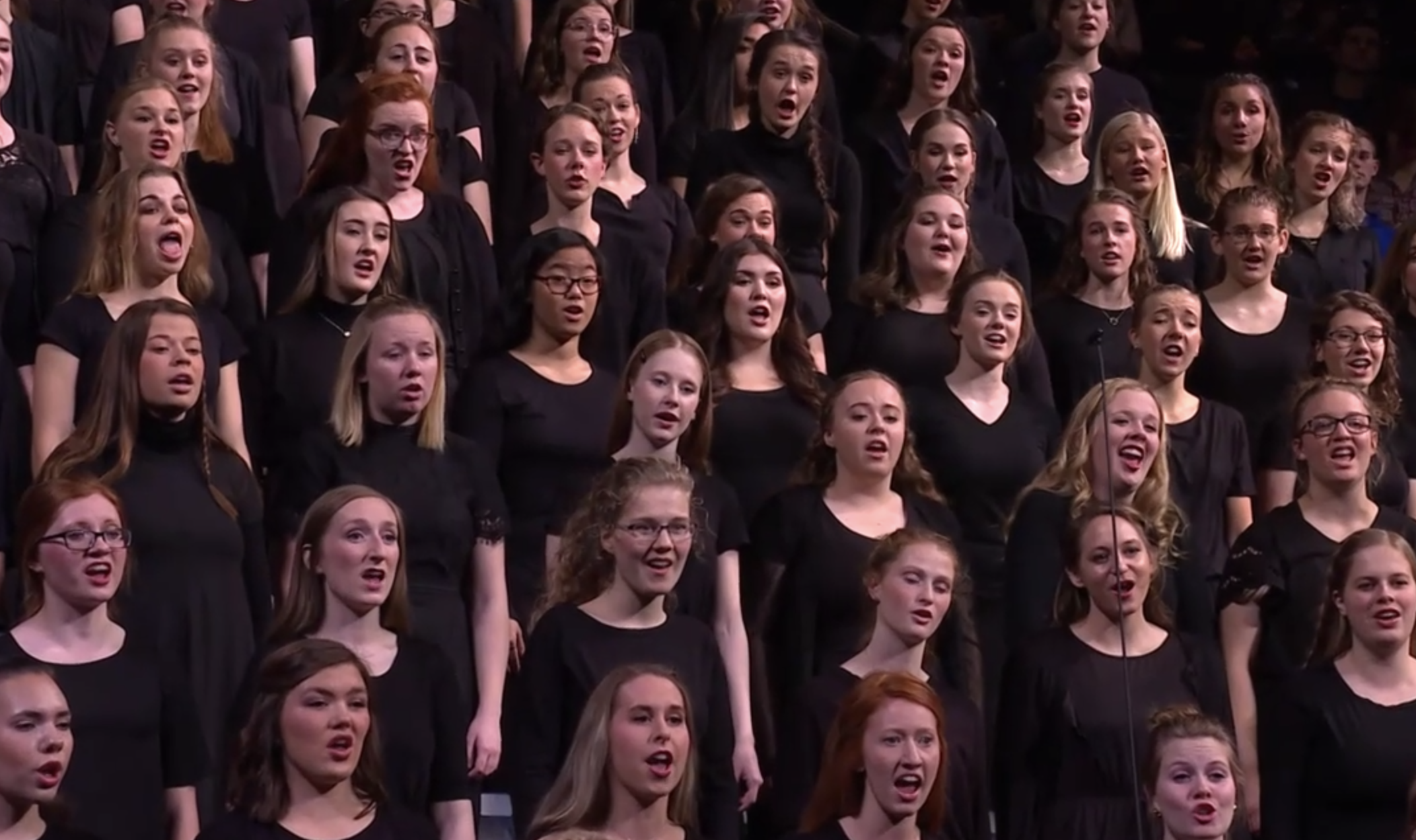 A student choir sings during a Tuesday devotional with Sister Jean B. Bingham in the Marriott Center on the BYU Provo, Utah, campus on December 10, 2019. Photo courtesy of screenshot from BYUTV. 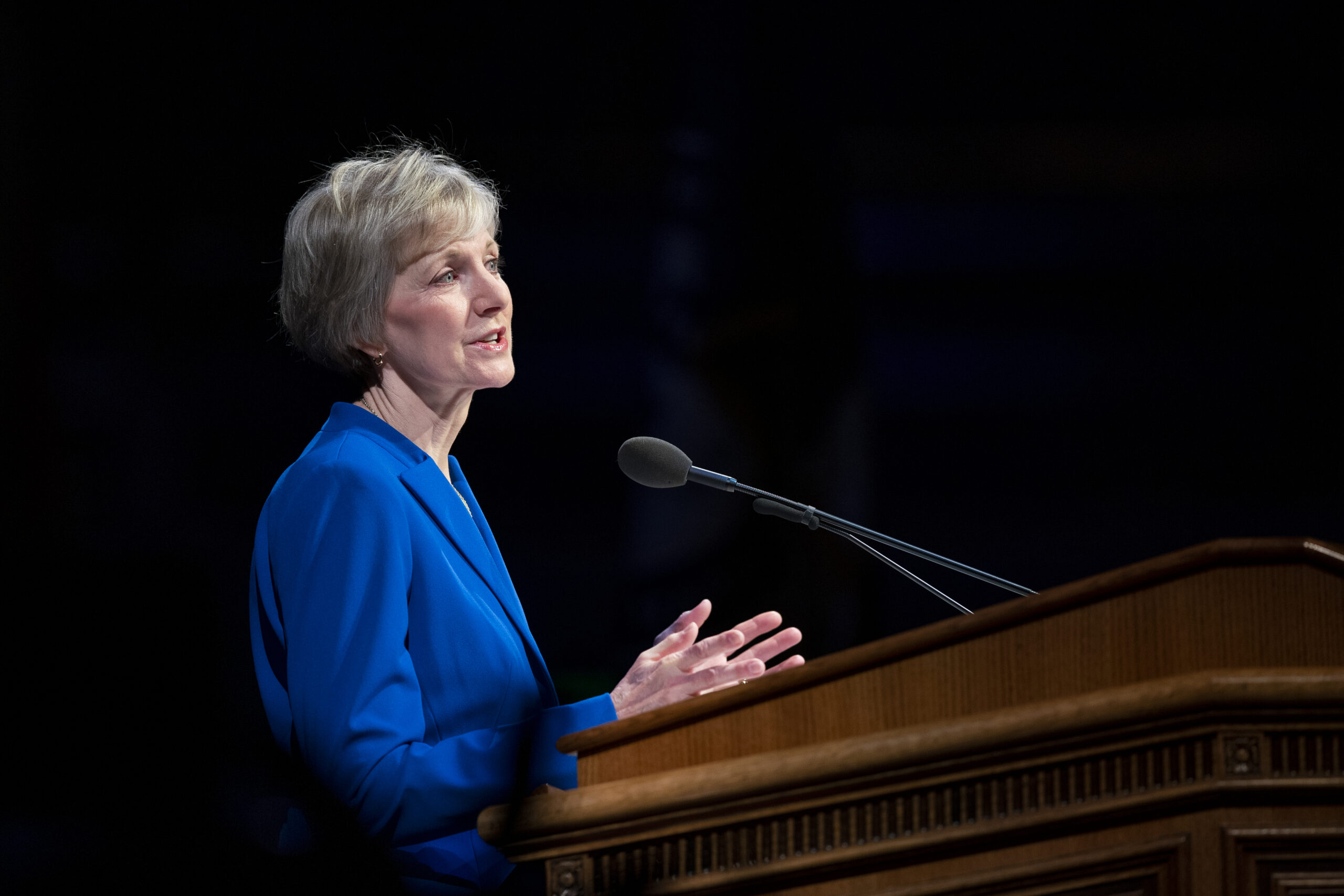 Sister Jean B. Bingham speaks at a BYU campus devotional in the Marriott Center in Provo, Utah, on December 10, 2019. Photo by Tyler Richardson, BYU Photo. 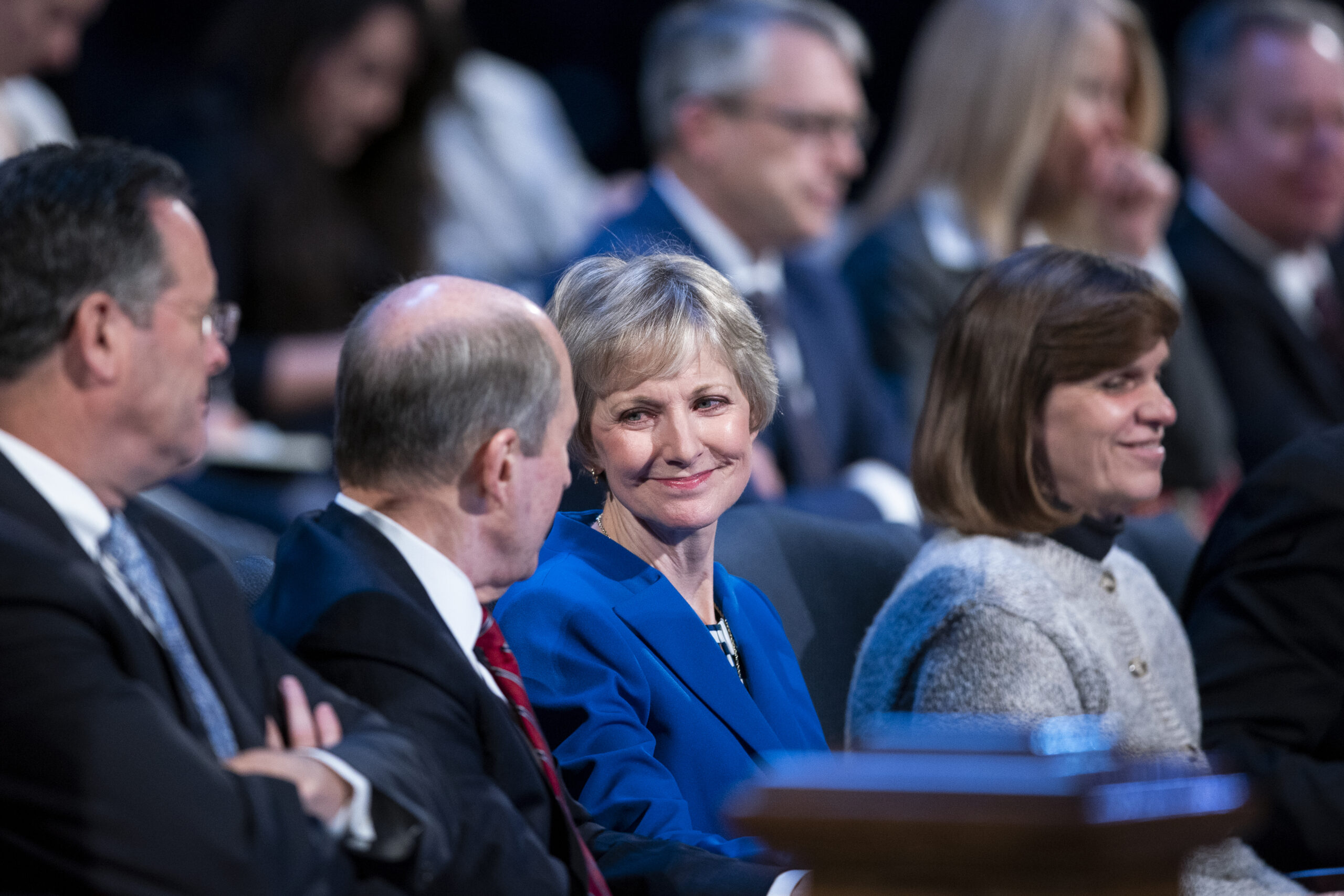 Sister Jean B. Bingham with her husband, Bruce Bingham, on the stand prior to a BYU campus devotional in the Marriott Center in Provo, Utah, on December 10, 2019. Photo by Tyler Richardson, BYU Photo.