Sister Julie B. Beck, general Relief Society president, met with close to 10,000 women and priesthood and Relief Society leaders in Rexburg, Idaho, teaching about a variety of topics, including the new Handbook 2.

“We depend on you, the rising generation of women, to breathe new life into Relief Society.” —Julie B. Beck, Relief Society general president

General Relief Society President Julie B. Beck met with nearly 10,000 Relief Society sisters and leaders on February 26, 2011, to strengthen their faith and to encourage them in their roles in Relief Society and in the Plan of Salvation.

In a general session held that morning and a leadership training that afternoon, Sister Beck fielded questions from women and priesthood leaders from more than 40 southeastern Idaho stakes.

“She was so tender with those asking the questions,” said Mary Lou Wilding, who attended the morning session. “She was careful and brought the scriptures in and the Savior’s teachings. … What a great example she is of what we should be in approaching others and in caring and consideration for their feelings”

Speaking first in the new Brigham Young University–Idaho Center and later in the Hart Auditorium, Sister Beck addressed questions on the new Church Handbook, working with less active sisters, finding balance, the purposes of Relief Society, its partnership with the priesthood, visiting teaching, and more.

During the afternoon leadership training, Sister Beck gave Relief Society and priesthood leaders an opportunity to share what they had learned from the First Presidency and Quorum of the Twelve Apostles during recent worldwide leadership broadcast and to ask additional questions that they have had since. 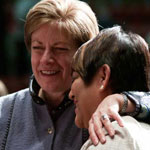 After hearing the questions, and before responding to any of them, she asked a question of her own, “Have you taken these questions into your council meetings? Some of these are good council meeting questions.”

Sister Beck talked about her gratitude for the thorough training provided by Church leaders.

“We … are engaged in the work of salvation,” she said. “I hope that was one of the clear messages that came through in all the leadership training meetings we’ve had.”

She pointed out that the handbook begins with chapters on families and the Church in God’s plan, priesthood principles, leadership, councils, and the work of salvation.

“Relief Society is part of that,” she said. “We don’t plan anything; we don’t do anything that is outside of the Lord’s work of salvation.”

Citing the Lord’s commandment in 2 Nephi 9 to labor not for things that cannot not satisfy, Sister Beck counseled those attending the general session to find balance by going to the Lord, then setting boundaries and prioritizing.

“We know there are some essential things that must be taken care of if we are going to achieve eternal life,” she said. “To get the spirit and know what that is we’re going to have to read the scriptures, and pray every day, and go to the temple, and fast, and do the things the prophets have told us to do.”

She emphasized the importance of the Holy Ghost in prioritizing. “No woman ever has enough time, enough energy, and enough strength to do all the good things that are in her mind to do,” she said. “We have to have the help of the Holy Ghost to take care of what is most essential.”

Fulfilling the Role of Woman

Just as the Savior invited Mary and Martha to participate in His work, something unheard of for the time, women today are an “equal half of a divine pair … in doing the Lord’s work.”

Sister Beck urged those in attendance to become articulate, so that they can express their testimonies to others. She also told sisters to develop their gifts, talents, and abilities and to share them with others.

As the female half of the Father’s plan, women have tremendous influence in creating a climate where the spirit can nuture their family’s spiritual growth and protect them, Sister Beck said. Yet it is one of the roles women neglect most.

“You have the ability to create a climate in your home where the Spirit resides,” she continued. “The temple has a certain climate, and when you walk in there you recognize it. The world should be able to recognize that in your homes.”

Cyndel Huffaker, a student at BYU–Idaho who attended the general session, said, “Sometimes you wonder what your part is. I have a testimony of my part as a woman, and it strengthened me to hear of my importance and my role.”

A Rising Generation of Women

Sister Beck commended the sisters in attendance for their desire to do the Lord’s will.

“We depend on you, the rising generation of women, to breathe new life into Relief Society … that it will be the shining light of the future, working side by side with brethren who hold the priesthood to help build the kingdom of God and prepare the Earth for His coming,” she said.

Sister Beck testified that as those involved in the work of Relief Society keep the Lord’s purposes in their heads and in their hearts and fulfill His purposes here on Earth, they would be blessed, strengthened, cleansed, and healed.

“We have an organization established by the Lord to bless His daughters,” she said. “The Lord knows who you are because it is His work. He will strengthen and magnify you.”