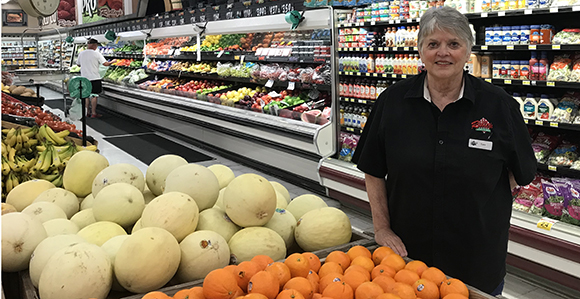 Attending a self-reliance course helped 70-year-old Toni Sleight have the confidence to secure a job as a cashier. Photo by Trent Toone, Deseret News.

“Self-reliance has changed me. My faith has been strengthened because I know I’m capable of much more than I was before. There’s a peace and sense of gratitude that comes with all of this.” —Toni Sleight, course participant

An envelope was passed to Toni Sleight and her husband, Thomas, as they sat in a pew before sacrament meeting.

Inside was an invitation for the senior couple to take part in the personal finance course, one of four self-reliance programs developed by The Church of Jesus Christ of Latter-day Saints to aid members with the spiritual and temporal necessities of life.

Initially, the 70-year-old Toni Sleight resisted the idea. Why them? What if she had to open up about the embarrassing details of their financial situation? She didn’t want people to know those details. There was also a significant time commitment—two hours a week for 12 weeks. It was too much.

Then Toni Sleight considered the alternative: more sleepless nights spent tossing and turning as she stressed over their situation. She had retired four years earlier, and they had downsized to a small home in Garland, Utah. But her 73-year-old husband’s health problems disrupted their plans and forced them to approach their bishop for help.

Their long-term prospects looked grim. Her husband couldn’t work. She didn’t have a driver’s license, and who was going to hire her at her age? It was clear they needed help.

Trusting in her bishop’s understanding of their situation, Toni Sleight steeled herself and accepted the invitation, a decision that has made all the difference for her and her husband.

“It was faith that prompted me to accept the opportunity, and the course helped me to have the faith that I could do it,” Toni Sleight said. “Self-reliance has changed me. My faith has been strengthened because I know I’m capable of much more than I was before. There’s a peace and sense of gratitude that comes with all of this.”

Sleight is just one of hundreds of thousands whose lives have been blessed and enriched through the Church’s self-reliance initiative. Serving as a facilitator not only helped another woman to return to activity but also resulted in her and her husband being sealed in the temple.

Elder Michael Ringwood, a General Authority Seventy and Executive Director of the Church’s Self-Reliance Services, said that since they started keeping records in 2015, the four programs of Personal Finances, Find a Job, Education for Better Work, and Start and Grow a Business have helped more than 670,000 worldwide.

“To me, this is one of the greatest things I have ever seen the Church do,” Elder Ringwood said. “One of the blessings is for me to see people across the world willing to help each other, willing to minister to each other in a way that allows people to provide for themselves. It allows people to reach a different spiritual level in their relationship with Heavenly Father and the Savior. It helps relieve burdens on bishops.”

The self-reliance initiative, developed by the Church less than five years ago, works under the direction of local priesthood leaders. Members are invited or encouraged to attend one of the four 12-week courses where they learn to practice principles of faith, hard work, education, and trust in the Lord. Each participant is accountable to the other members of their group, and in the process they receive what President Gordon B. Hinckley said every convert needs: a friend, a responsibility, and nurturing by the good word of God, Elder Ringwood said.

The initiative is making a difference. Using a survey to track the progress of graduates six months after they completed a course between January 2016 and June 2018, the Church learned:

In tracking group-specific results six months after the end of a course between January 2016 and June 2018, the Church found:

In reporting the many temporal success stories, many have described a spiritual change as well, Elder Ringwood said.

“They always include what happened to them spiritually. We call it temporal and spiritual self-reliance, but we’re really focused on people who need an education, who need jobs, who need to start and grow a business, and who need help managing their finances. That’s why we exist, to help those people,” Elder Ringwood said. “But it’s refreshing to have people report what it has done to them spiritually. We hear all the time, ‘I had no idea Heavenly Father cared about my job’ or ‘I had no idea He cared about my education.’ They start to pray, ponder, and work together, and it’s marvelous what’s happening to them spiritually and personally.”

As the self-reliance program continues to grow, Elder Ringwood hopes it can be used as a tool for ministering.

“This is one of many tools the Church has that actually helps a ministering brother or sister to minister,” Elder Ringwood said. “They go in to visit a family and find out they’re struggling with their finances, for example. A great ministering opportunity would be to invite them to come with them to this class. You can give them a tool that helps them to meet their needs.”

For Carol Hyatt, serving as a self-reliance facilitator in her Oregon ward changed her life.

After more than 40 years of being away from the Church, Carol and Ted Hyatt began to return. With both he and his wife in their mid-70s, Ted Hyatt felt an urgency to be sealed to his wife in the temple, but she had reservations about paying tithing and wasn’t ready. In fact, she told her bishop not to ask her to speak or accept a calling. She just wanted to attend church for a while, she said.

Their bishop, Todd A. Josi, had known the couple since he was a boy. He was excited to see them return to church and didn’t want to rush things. One day while on a long drive, the bishop had a strong impression that if he asked Carol Hyatt to serve as a facilitator, it would resolve her doubts about tithing, he said.

Initially Carol Hyatt was reluctant. She considers herself a shy person and uncomfortable in front of people. But when she realized she didn’t have to teach, only direct a discussion, she agreed to do it. 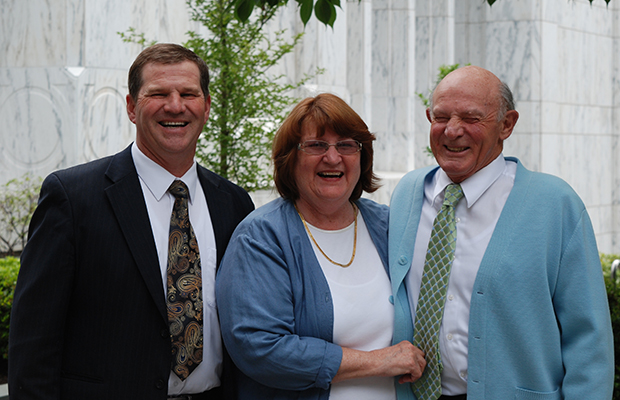 Last May, surrounded by friends from her self-reliance group and their bishop, Carol and Ted Hyatt were sealed in the Portland Oregon Temple. Photo courtesy of Carol Hyatt.

“Sometimes you’re in the right place at the right time,” Carol Hyatt said. “It was the right group and the right timing for me. They helped me get my faith back that I needed to pay tithing.”

During their discussions, Carol Hyatt realized she was the only one in the group not paying tithing. The group members shared their experiences and testimonies about tithing, and by week 11 of the course, Carol Hyatt told Bishop Josi she was ready to pay her tithing, she said.

On May 26, one day after their 58th wedding anniversary, Ted and Carol Hyatt were sealed in the Portland Oregon Temple. They shared that special day with the members of Carol’s personal finance group, Bishop Josi, and other friends from the ward.

“It was unreal,” Carol Hyatt said. “It meant so much to us that the class was there to support us. We were thrilled they could all be there.”

Bishop Josi said seeing the experience unfold was a “spiritual, wonderful experience.” It was also sweet to see the special bond created by the group through the course.

“Heavenly Father knew exactly what she needed and how it needed to take place,” Bishop Josi said. “He just laid it all out beautifully for her. She’s a special person.” 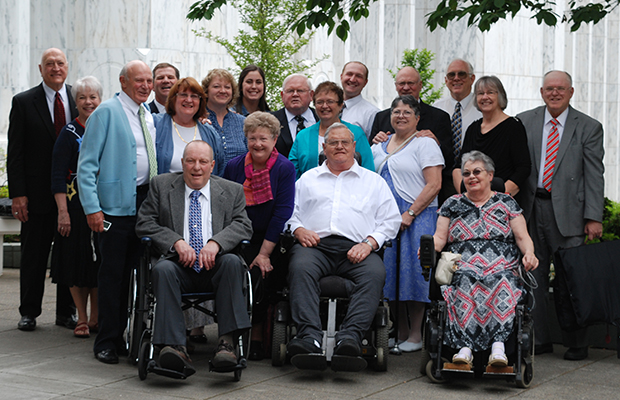 Last May, surrounded by friends from her self-reliance group and their bishop, Carol and Ted Hyatt were sealed in the Portland Oregon Temple. Photo courtesy of Carol Hyatt.

“They are gone,” Bishop Josi said. “That program has taken such a huge weight off me as a bishop. I can’t even tell you. The program is just beautiful.”

Following the principles of self-reliance has also resulted in a better situation for Toni and Thomas Sleight.

After completing the course, Toni Sleight got a job in Logan, Utah, a 30-minute drive from their home. Because she didn’t have a driver’s license, ward members who worked in the area and her husband gave her rides to and from work. Later an opportunity to work as a cashier at a grocery store close to home came about, eliminating the expense of her commute. Her husband has lost weight and is feeling better these days. With the additional income her job provides, the future looks brighter, she said. 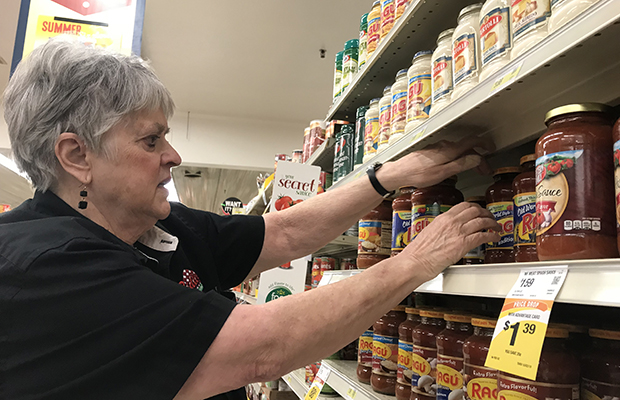 Toni Sleight arranges items on a shelf at Ridley’s Family Market in Tremonton, Utah. Attending a self-reliance course helped the 70-year-old have the confidence to secure a job as a cashier. Photo by Trent Toone, Deseret News.

Her bishop, Bradley Rhodes, sees a positive change in her countenance.

“They were pretty broken,” Bishop Rhodes said. “Now there is light and hope in her countenance, not only for her future and family situation, but I see it in here as well. She has confidence. She has a light and joy that was lacking there before.”