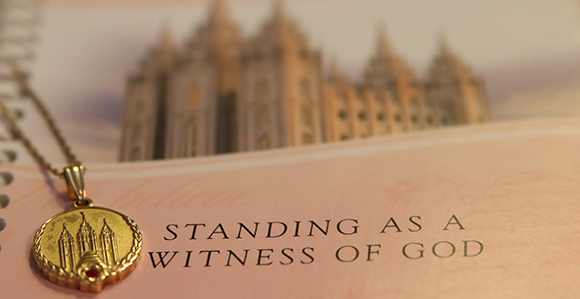 Sister Coralie Bolingbroke, age 83, earned her Personal Progress medallion a year after she was called to serve in her ward’s Young Women organization.

“Yes, give me a young woman who loves home and family, who reads and ponders the scriptures daily, who has a burning testimony of the Book of Mormon.” —President Ezra Taft Benson

To help motivate the young women, Sister Bolingbroke reported her progress every week. Rachel Buchanan, the Young Women president for the Ogden 4th Ward, said that Sister Bolingbroke is so full of energy and enthusiasm that it is easy to forget that she is 83 years old.

Since there was not a Personal Progress program when she was a young woman, this has been Sister Bolingbroke’s first opportunity to earn her medallion. “Because [she] is an excellent example of magnifying her calling—any calling she receives—she promised the young women in the ward that she would work right along with them and earn her medallion. She did it,” said Sister Buchanan.

“She continually bears testimony of the divine inspiration of the Personal Progress program and is an amazing example of a strong, faithful, covenant-keeping woman. We are all better people because of Sister Bolingbroke’s example,” said Sister Buchanan.

During the general women’s meeting of the October 1986 general conference, President Ezra Taft Benson said: “Yes, give me a young woman who loves home and family, who reads and ponders the scriptures daily, who has a burning testimony of the Book of Mormon. Give me a young woman who faithfully attends her church meetings, … who has earned her Young Womanhood Recognition Award and wears it with pride! Give me a young woman who is virtuous and who has maintained her personal purity … and I will give you a young woman who will perform miracles for the Lord now and throughout eternity” (“To the Young Women of the Church,” Ensign, Nov. 1986, 84).

President Benson continued by saying: “Live up to your divine potential. Remember who you are and the divine heritage that is yours—you are literally the royal daughters of our Father in Heaven.”