Seventy Shares How to Avoid “Deepfakes” and Deception 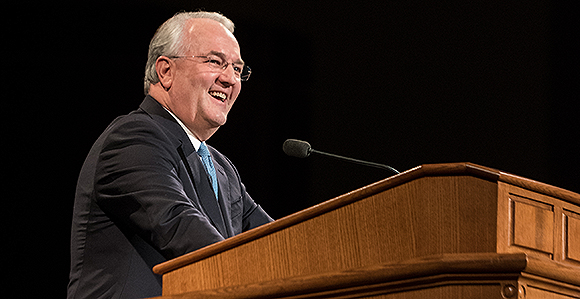 “Fundamental to our ability to abide the day and to see through the worldly deception around us, we must strengthen our ability to hear the word of the Lord through His prophets and through personal revelation.” —Elder Jack N. Gerard of the Seventy

President Henry J. Eyring’s love for waterskiing is well known to the student body of BYU-Idaho, especially after his September 25 devotional address. So as Elder Jack N. Gerard, a General Authority Seventy, presented a short video of the BYU-Idaho president waterskiing in a suit and tie while carrying a briefcase during an October 29 devotional in the BYU-Idaho Center, several students acknowledged they had seen it during the devotional several weeks before. “But how many of you have seen this video?” he asked before showing the audience a second video.

In this clip, President Eyring announces that BYU-Idaho will offer a new major in aquatics with an emphasis in waterskiing, and that he will be chairing the department until a suitable replacement can be found. “It is strongly recommended that any student who is undecided on their current major take a hard look at this new and exciting program,” President Eyring said in the video.

Except this is not President Henry J. Eyring, Elder Gerard said. Nor is he the waterskiing man in the business suit.

The first video was created by photoshopping President Eyring’s face onto a stock video available online and looked similar enough to one the students had already seen that they mistook it as real.

The second was created using what is known as the deep fake—a type of artificial intelligence technology that can take a person’s face or voice and make it seem they have done or said something they didn’t.

“The video of President Eyring announcing your new aquatics major was created by a Church employee with no prior experience who simply found a man in the lunchroom with a similar body shape who was willing to be filmed while reading a script,” Elder Gerard explained. Within a few hours and with readily available technology, this employee created the “deepfake” video. 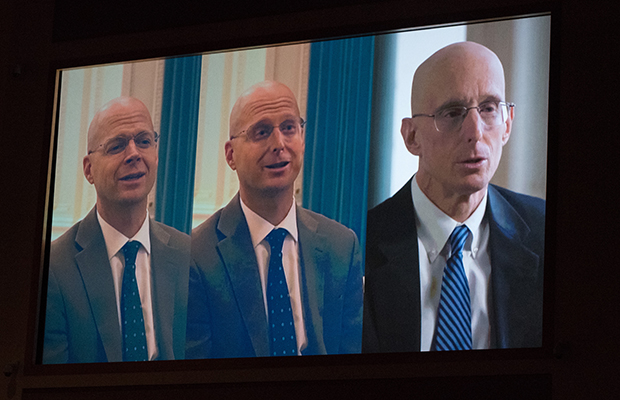 A video is shown to demonstrate how a deepfake video of President Henry J. Eyring was made, during a BYU-Idaho devotional on October 29, 2019. Photo by Cami Su, BYU-Idaho.

In an era with deceptive practices like deepfakes, it seems that seeing isn’t believing anymore, Elder Gerard said. “While technology advancements have been a great blessing to humankind, they can also be turned to uses that pose a serious challenge to our ability to assess truth from error, right from wrong.”

Elder Gerard then posed the question: “How do we stay on the covenant path and survive the deceptive world in which we live?”

Much of the answer, he said, comes from Doctrine and Covenants 45:57: “For they that are wise and have received the truth, and have taken the Holy Spirit for their guide, and have not been deceived—verily I say unto you, they shall not be hewn down and cast into the fire, but shall abide the day.”

For each person to come unto Christ and “abide the day,” Elder Gerard gave two principles to consider. “First, to follow the prophets with exactness by listening more completely to what they say; and second, as our prophet President [Russell M.] Nelson has counseled, we must learn to receive revelation.” 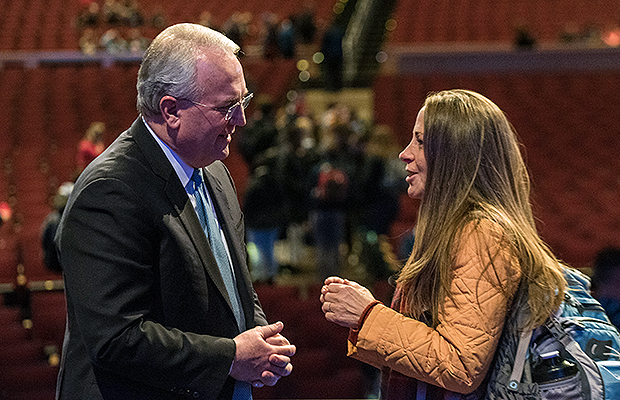 Elder Jack N. Gerard speaks with a student after a BYU-Idaho devotional on October 29, 2019. Photo by J. Lawson Turcotte, BYU-Idaho.

In regards to the first principle, Elder Gerard invited listeners to ask themselves, “How closely do I study what the prophets have taught, and do I truly follow with exactness?”

There are times when people think they are following the prophet, but have actually interpreted the counsel too narrowly or missed the purpose for the prophet’s invitations.

While many accepted the invitation and abstained from social media, they missed the true purpose of the fast, Elder Gerard said.

“When we look back over the past year we might ask ourselves, ‘What has changed?’ Have we had other fasts to limit our screen time so we can more easily hear the whisperings of the Spirit? Or have we slipped back into our old habits and rationalized that we followed the prophet by abstaining for seven days?”

President Nelson gave a similar invitation to the women of the Church during the October 2018 women’s session of general conference when he asked them to participate in a 10-day social media fast. In addition to abstaining from social media, President Nelson said, “Pray to know which influences to remove during your fast. … What do you notice after taking a break from perspectives of the world that have been wounding your spirit?”

Elder Gerard said that everyone who participated in a social media fast should ask themselves if they have adjusted their lives and followed through on impressions received to avoid the self-inflicted wounding of their spirits.

Each impression comes through revelation.

“Fundamental to our ability to abide the day and to see through the worldly deception around us, we must strengthen our ability to hear the word of the Lord through His prophets and through personal revelation,” Elder Gerard said. 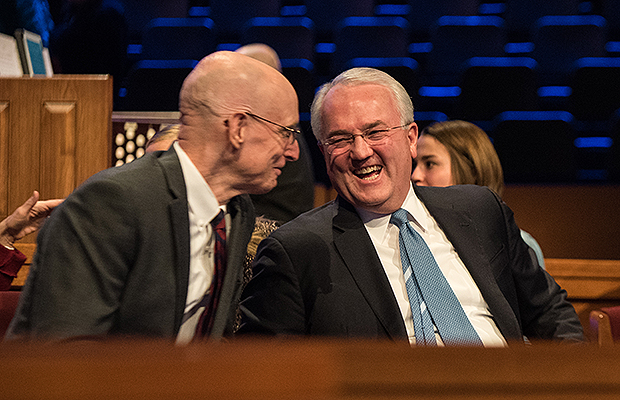 The power of the Holy Ghost is the primary source of personal revelation. When someone acts on the impressions he or she receives, the Lord aligns that person with His will.

“He will reveal to us for our personal benefit the same direction He is giving His prophets for the benefit of the Church,” Elder Gerard said.

He shared an experience he had while counseling with President Dallin H. Oaks, First Counselor in the First Presidency, a few months ago. During that conversation, Elder Gerard felt impressed to talk about a prompting a few weeks earlier when he had been presiding at a stake conference.

“I shared how the strong impression came to my mind to teach the two great commandments and to remind the Saints that the world seeks to hold us accountable to the second great commandment, to love our neighbor, but perhaps conveniently overlooks the first—to love the Lord by keeping His commandments.”

President Oaks then took a thick file from a drawer in his desk, containing extensive study that he and the First Presidency had been working on for some time on this very topic.

“He then kindly said, ‘Isn’t it great we are both listening to the same Spirit?’” Elder Gerard said. “This body of work became the foundation for the talk he gave in general conference just three weeks ago.”

Receiving revelation line upon line, precept upon precept, helps each person to learn to trust the Lord and gain confidence in His voice, Elder Gerard said. “This confidence helps us distinguish the cares of this life—the possible deceptions—from those things that matter most, the things of eternal worth.”

In order to abide the day, Elder Gerard said in closing, “you must listen to and follow the teachings of the prophets and learn to receive revelation.” In doing so, individuals will be protected from the deceptions of this life.

Students arrive at the BYU-Idaho Center for a devotional on October 29, 2019. Photo by Cami Su, BYU-Idaho.