Seventy Shares 3 Ways for Staying Cheerful and Trusting the Lord 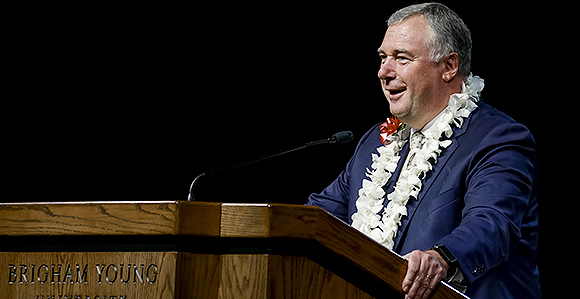 Why do the most treasured blessings often go together with the most severe trials?

That’s the question Elder Erich W. Kopischke, General Authority Seventy, asked as he began his address on Tuesday, February 19, at a devotional on the campus of BYU–Hawaii.

In his address, Elder Kopischke alluded to the idea that it is through great suffering that great happiness can best be understood and appreciated. And focusing on the many concerns and questions that individuals have when faced with struggles and trials in their lives, he offered three suggestions to help individuals stay cheerful and trust in Heavenly Father, even during the most difficult phases of life.

1. Hold on to divine law and absolute truth

Sharing a message from President Russell M. Nelson, which he had given to General Authorities during his first year as President of The Church of Jesus Christ of Latter-day Saints, Elder Kopischke explained how understanding God’s eternal laws and truths can help individuals more clearly navigate the difficulties that confront them.

“Eternal truths are ‘things as they are, and as they were, and as they are to come.’ They never change; they are totally predictable and reliable,” Elder Kopischke said. “Some people call these laws the laws of nature, but we know that they are a part of the eternal laws of God. He created and organized the universe, including our earth and our nature, by applying these laws. Because these laws are eternal, they are absolute and they can be proven. They will bless us if we follow them. And so it is with all truth and with all laws that come from God.”

Extending an invitation to students to test the laws and truths of the gospel for themselves, Elder Kopischke promised students that by doing so, they would come to a sure knowledge of their truth and power.

He shared three truths that he noted can act as a “compass of clarity amid the fog of life” for those looking to follow the Lord: 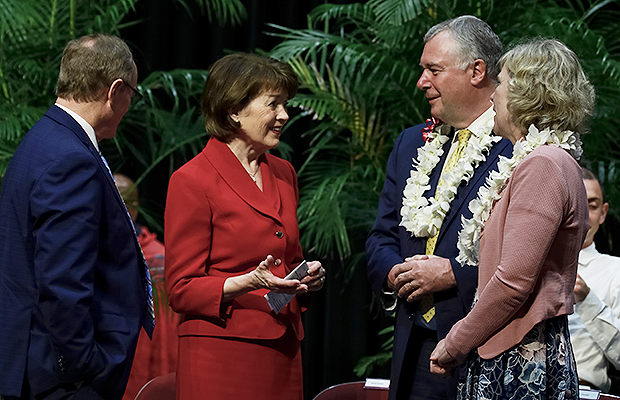 2. “Live after the manner of happiness”

“Make a conscious decision to live after the manner of happiness,” Elder Kopischke said, introducing his second suggestion. He then shared 11 principles that can help keep individuals living in the way described in 2 Nephi in the Book of Mormon:

“Living the principles of the gospel of Jesus Christ just makes us happy,” he said.

Sharing the story of a man named Dr. Richard Huang, Elder Kopischke related how Dr. Huang had lived most of his life as an atheist and never felt he had a satisfactory answer for the purpose of life. One day, deciding he needed to do something different to find an answer to his question, he requested a free copy of the Bible from the Church. As Elder Kopischke noted, Dr. Huang figured that if atheism couldn’t give him an answer, perhaps an answer could be found through theism.

A short time after, two sister missionaries showed up on his doorstep to deliver his requested copy of the Bible. They began teaching him and eventually a friend began inviting him to church as well.

Quoting Dr. Huang, Elder Kopischke said, “When I was looking for my faith, I was expecting a miracle to help me see the light, but God knew that I would not have believed in miracles, so what He did was put people in my life to show me the truth of the gospel. And I believe in people.”

He continued, “I never thought I would ever end up being [a member of the Church]. But what I have found is I have a sense of purpose. It is to become better, to become more like Christ. And now, to me, my faith is everything, and I am so happy that I made that realization.”

Happiness is not always as straightforward as one might hope, Elder Kopischke clarified, noting that trials often come even when people are living righteously.

“Let me assure you that despite your trials—even if you are having heart-wrenching questions or experiencing periods of doubt—you can be happy,” he said. “Decide consciously to press forward on the covenant path and live the gospel of Jesus Christ even in times when you might not have all the answers. As you do so, you will be blessed, and you will be happy.” 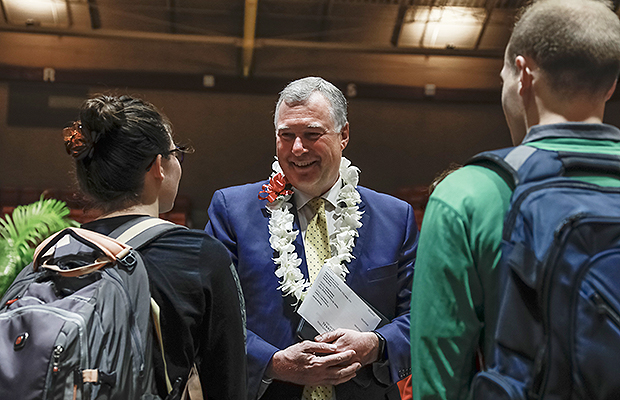 His third and final suggestion for staying cheerful and trusting in Heavenly Father comes as a directive from the Lord, Elder Kopischke said.

“Wherefore, stand ye in holy places, and be not moved, until the day of the Lord come” (Doctrine and Covenants 87:8).

While the most holy place on earth is the temple, or house of the Lord, Elder Kopischke shared that holy places can be found or made where individuals can study and ponder the scriptures, pray, and simply try their best to live worthy of the spiritual blessings of God. “If you stand firm in those holy places, striving for the companionship of the Holy Ghost, you will never falter,” he said, noting that the world will certainly make it difficult at times.

An example of blessings and trials

Joseph Smith, the prophet of the Restoration, endured some of the most difficult trials of anyone in the restored Church, Elder Kopischke noted, detailing accounts of the Prophet being tarred and feathered and his time at Liberty Jail. But despite his trials, the Prophet Joseph Smith shared profound statements of inspiration throughout his ministry, which served to lift and support others in their trials.

“After five months’ imprisonment in Liberty Jail, the innocent Prophet Joseph Smith shared this powerful conviction: ‘Therefore, dearly beloved brethren [and sisters], let us cheerfully do all things that lie in our power; and then may we stand still, with the utmost assurance, to see the salvation of God, and for his arm to be revealed,’” Elder Kopischke said.

By holding to these three directives to follow divine law and truth, live after the manner of happiness, and stand firm in holy places, “you will always be right,” Elder Kopischke concluded. “You will come to know our Savior, Jesus Christ. He is willing to guide you along if you allow Him to do so.” 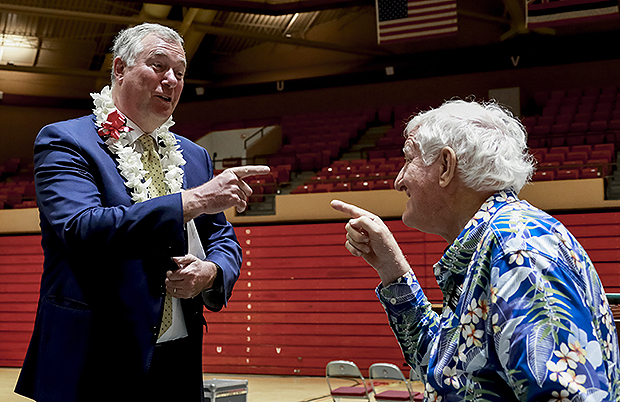