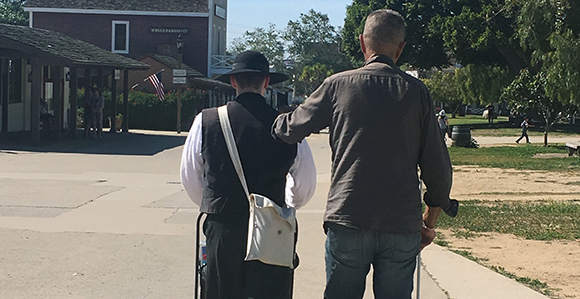 “To be presented an honor like this shows the quality of service rendered by these remarkable young people. It’s a real commendation to the service missionaries who are on their missions living at home and serving the Lord. We’re humbled by it.” —Elder S. Gifford Nielsen, General Authority Seventy

That's according to Tim Downing, volunteer coordinator for California State Parks, who said, “We can always expect them to be there with a smile; they’re being polite; they’re willing to learn what they need to do.”

In fact, when Downing tells anyone about the young service missionary program at Old Town, he likes to use one photo in particular because it’s—in his words—the “epitome of everything that everybody should be doing.”

Although the missionary, Elder Spencer Larsen, has since finished his service mission, the impact his small act of kindness had on Downing’s view of the Church service missionaries is memorable. “This picture, to me, represents the quality, dedication, and compassion these missionaries have for their community,” Downing said.

That consistent, positive presence over the last two-and-a-half years—compounded with around 4,000 volunteer hours of service—is why Downing decided to award the Volunteer Medallion for Superior Achievement to the Bramwells on January 26, 2019, in honor of the service they’ve given to the park with the young service missionary program.

Elder S. Gifford Nielsen, the General Authority Seventy who has been given responsibility for the service missionary program, said this is the first community award ever received by young service missionaries—an historic first. “To be presented an honor like this shows the quality of service rendered by these remarkable young people. It’s a real commendation to the service missionaries who are on their missions living at home and serving the Lord. We’re humbled by it.”

The Medallion award is the most prestigious given by California State Parks to volunteers. Downing only gives one each year.

“The Bramwells’ passion for not only the service mission but also their love of the park has helped to make the program the success it has been,” Downing said. “California State Parks needs more people like the Bramwells to have that passion and love for our parks.”

When the Bramwells started their mission three years ago, they never would have dreamed they’d be awarded the Medallion. For them, the award is a testament of the power of “pure service.”

That kind of service isn’t so different from the Latter-day Saints of the Mormon Battalion who helped settle San Diego more than 150 years ago—it’s the kind that makes a lasting impact. 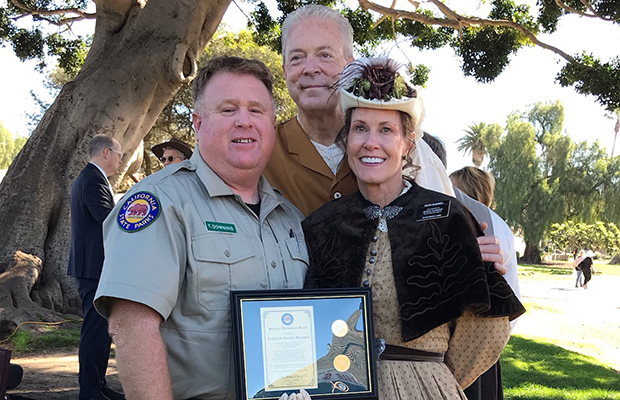 Spread across just 16 acres, Old Town State Park is the smallest state park in California. However, sitting right in the heart of San Diego, the urban park receives the most visitors—welcoming approximately 4 million guests each year.

Taking on that many visitors requires a unique kind of bravery from the service missionaries, Elder Bramwell pointed out.

“You may not and probably don’t have a companion, you’re walking into a California State Park on your assigned day to give service, you’re wearing period clothing, you’re wearing your black name badge, and that takes a tremendous amount of courage for a young man or young woman to do,” Bramwell said.

For Elder Bramwell, the rare opportunity of watching service and proselyting missionaries work side-by-side is a wonderful thing.

“It’s really a heartwarming experience to see these service missionaries and the proselyting missionaries as their paths cross, which doesn’t happen often, but when they do, that’s a really tender scene,” he said.

The impact yet another Latter-day Saint group had on the San Diego community, like the Mormon Battalion had before them, wasn’t lost on Downing when he inscribed the award plaque for the Bramwells.

“Your passion, dedication, and commitment to the park is a direct link and living testament to the memory of the Mormon Battalion,” the plaque reads. “Like the Battalion, you both have helped lay a great community foundation here in the park.” 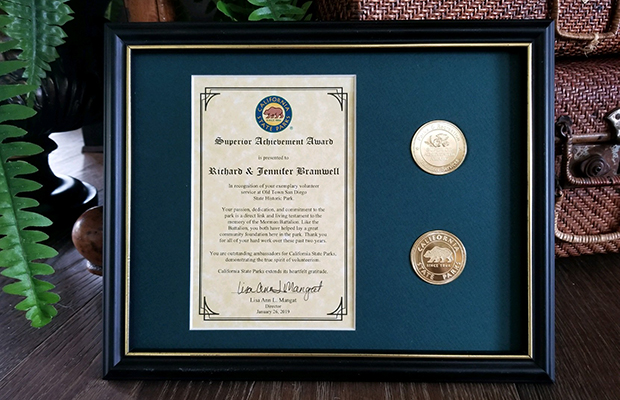 This plaque commemorates the service given by Church service missionaries at Old Town, comparing their service to that of the Mormon Battalion before them. Photo courtesy of Elder Richard Bramwell.

A remarkable impact at Old Town

Indeed, whether represented by a single photograph or by the numbers, Downing said the dedication given by these service missionaries has been remarkable. Their combined service hours in 2017 and 2018 made up 12 percent of the total service hours given to the park during that time—the work equivalent of 2.5 part-time staff members and 2 full-time staff members, Downing said.

And now, just as the Mormon Battalion paved the way for so many others after them, the group of service missionaries at Old Town has opened the doors of additional service missionary possibilities in California.

“What has happened in Old Town State Park has been so well received by the state of California that they are anxious and desirous to have service missionaries serve throughout the entire state park system,” Elder Bramwell said.

The value of missionary service

Since January 2019, any young adult desiring to give missionary service now applies through the same online portal. An assignment comes from an Apostle to proselyting and service missionaries alike, and then they both receive a call letter signed by the prophet. Elder Nielsen said this unified application process gives equal opportunities to all who want a chance to serve God and their fellow man, regardless of their health condition.

The Bramwells, who previously served as mission presidents in Ohio, said the highlight of their mission in the San Diego Service Missionary Area has been seeing the young service missionaries’ lives change as they become better prepared for life after their missions. Service missionaries “try so hard and give all of their heart and stretch and grow just as much as our proselyting missionaries,” Sister Bramwell said.

The growth isn’t just limited to the young service missionaries though, and the Bramwells were quick to note how their missionary service has blessed their own lives.

“Being able to be a missionary and live at home is unique; we enjoy that,” Elder Bramwell said. “Hopefully more senior couples will have the opportunity that we have had to connect with these outstanding service missionaries who are giving so much in so many different ways.”

“The charitable organizations and government municipalities where these service missionaries serve all say the same thing—that they’ve got the heart of a true volunteer,” Elder Nielsen said. “They serve consistently during the week, day in and day out, making a difference with a smile on their face. It’s tremendous. You can see their testimony of Jesus Christ in their service.”