Daniel Andersen on the trail being pulled and pushed by his faithful trek “brothers and sisters“ in the Platte City Missouri Stake.

“Generally, we have thought for years that Daniel’s involvement in trek would be very limited. In our wildest dreams we never would have thought he would have a custom-built handcart.” —DeWayne Andersen of the Platte City Missouri Stake

With a custom-built handcart and the love and service of fellow Latter-day Saints, Daniel Andersen was able to experience a youth conference and handcart trek, covering ground made sacred by early Mormon pioneers.

“When I think about the trek experience, I rejoice in the goodness of the service attitude of our Church,” he said.

On the trail July 23–25 in some of Missouri’s most historic Latter-day Saint countryside, nearly 200 members of the Platte City Missouri Stake donned pioneer garb, set up camp, and pulled fully loaded handcarts to experience what early Mormon pioneers learned along the trek west. Daniel was amazed to be able to be one of them.

Over a year ago, youth leaders began discussing ways to enable Daniel to experience the youth conference and pioneer handcart trek, traditional to the Platte City Missouri Stake’s Mutual program. Knowing that Daniel’s congenital disability requires he use a power wheelchair for getting around, Daniel’s father, DeWayne Andersen, commented, “Generally, we have thought for years that Daniel’s involvement in trek would be very limited. In our wildest dreams we never would have thought he would have a custom-built handcart.”

Jay Hales, stake Young Men president, got the ball rolling—or rather the handcart—by contacting stake member Dave Tallant. A former hot rod builder, now retired, Brother Tallant got started in his backyard workshop with a design concept that would look like a real handcart but have the functionality to be pulled by volunteer youth, bearing Daniel and his wheelchair on the long-distance trek. Brother Tallant built the two-axle cart with a pivoting front axle, small rubber tires for a low profile, and a ramp at the rear to load the wheelchair. “With so much to prepare, the trek occurs only every four years,” said Brother Hales. This year would be Daniel’s year. The stake provided 16 handcarts, several of which Brother Tallant was assigned by Church leaders to put together, in addition to building the special wagon for Daniel. 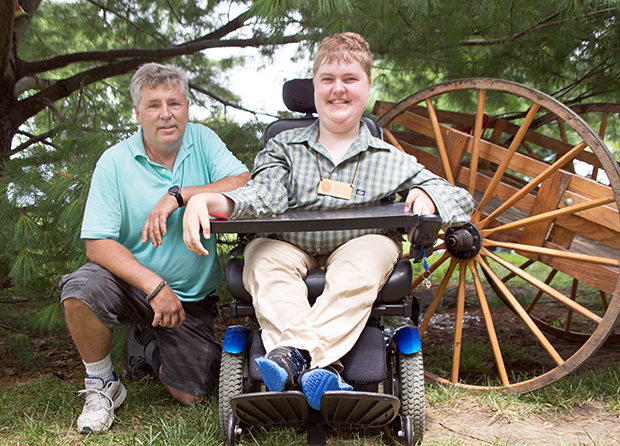 Dave Tallant, who built a special handcart, kneels beside Daniel Andersen on the grounds of the Far West Temple site at the end of the Platte City Missouri’s youth trek. Photo by Valerie Anderson.

The plan was for each “handcart family” to pull one handcart, which carries their supplies for the journey: tents, bedrolls, Dutch ovens, and food. A married couple was to become the “Ma” and “Pa” for a family of seven or eight young men and women 14 through 18 years of age, not their own children, but those gathered somewhat randomly from the 14 congregations in the stake.

Daniel’s “parents” for the trek were Jonnette and Ryan Geddes of the Platte City Ward, “a family where the pa was an emergency room physician,” noted Brother Andersen. From the 140 youth and 42 adults from northwest Missouri on the trek, each of the 16 “families” was to provide one person every hour to push Daniel’s handcart. “However,” remarked Brother Andersen, “two of Daniel’s Geddes cart family ‘brothers’ insisted on pulling his cart and refused to be relieved of that duty.” As Brother Tallant mentioned, “The average weight for each of the regular handcarts fully loaded was about 500 pounds, but the gross weight for Daniel’s wagon, wheelchair and all, was about 800–1,000 pounds to pull.” And the heat index for much of the trek was over 100 degrees. 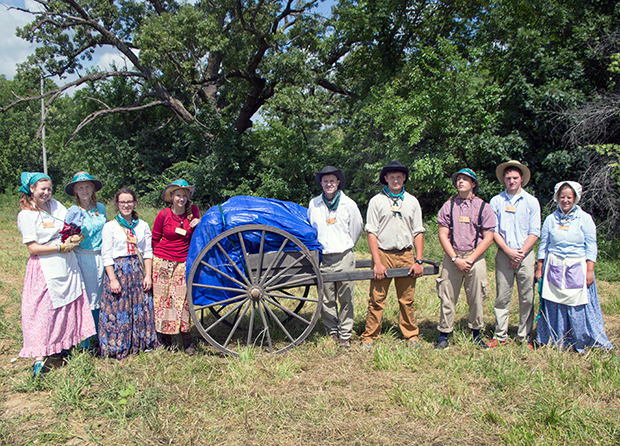 “I am super grateful for all of the service that Dave Tallant, the stake Young Men and Young Women presidencies, and the other youth who attended the trek gave to make me an integral part of trek,” Daniel said after arriving at trail’s end at the Far West Temple site. Hundreds of Latter-day Saints from the Platte City stake lined the entrance to this Mormon historic site. They were all there to welcome back the travelers and to celebrate the annual Pioneer Day, a yearly remembrance regarding their Mormon pioneer heritage.

The theme for trek this year was “His Path Will Take Us Safely Home.” The purpose of the trek challenge was to teach that the pioneer trail is a trail of tragedy, of triumph, of faith, of devotion, and of the consecration of life itself. Church leaders wanted the youth to feel, in some way, what the pioneers went through in order to be able to worship Jesus Christ and enjoy the religious freedom they won with the hardship of their journey.

At their journey’s end, these valiant young men and women were hailed as the next generation of leaders for the Church and for the stake. President R. Scott Holman, first counselor in the stake presidency, welcomed the youth to the Far West Temple site, saying, “The ground upon which you stand is holy ground. It is made even holier today by your presence. We go forth today to become pioneers. As you stay on His path, it will take you safely home.”

Brother Andersen, reflecting on the weekend, said, “We are very humbled by the service and grateful for the opportunity Daniel had to be part of this great experience. He formed friendships, which are meaningful to him. He’s seen service that we all believe reflects the Savior’s love.” 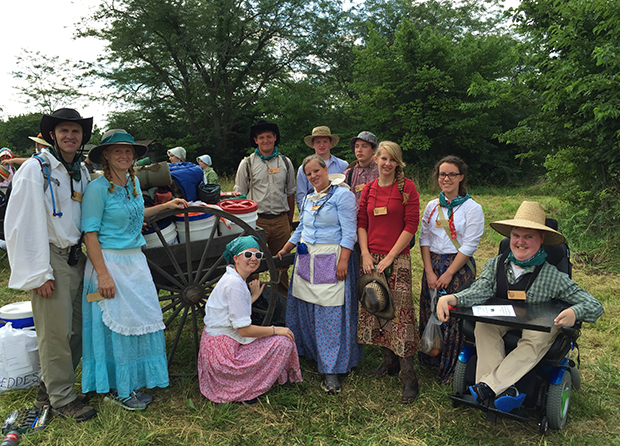