Senior Couples Are Prized Resources for Mission Leaders and Members 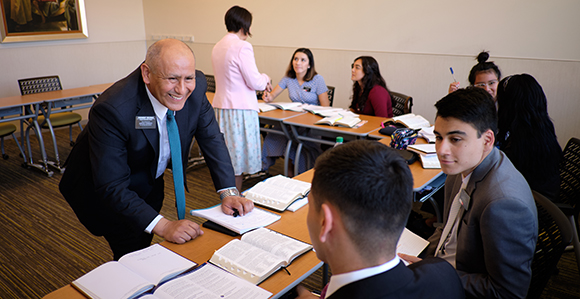 A new mission president and his companion talk with missionaries during the 2019 New Mission Leadership Seminar at the Provo Missionary Training Center, which was held June 23–25.

“I express gratitude for our senior missionaries. They are young in spirit, wise, and willing to work.” —Bishop W. Christopher Waddell of the Presiding Bishopric

Most of the mission leaders being trained at the 2019 New Mission Leadership Seminar will be provided a special tool—“your own precious gift”—to assist them in gathering Israel and preparing young elders and sisters for their futures.

“It is the gift of senior couples,” said Bishop W. Christopher Waddell on June 23. “If used wisely, this precious gift will be a great resource for you during the next three years.”

The Second Counselor in the Presiding Bishopric and a member of the Missionary Executive Council, Bishop Waddell was joined in his presentation on effectively utilizing senior couples by his own companion, Sister Carol Waddell.

The Waddells are not strangers to the annual seminar for new mission presidents and their wives. They first attended the conference in 2006 prior to serving together in the Spain Barcelona Mission. There they learned firsthand of the power that senior couples can bring to a mission.

Bishop and Sister Waddell began their presentation by sharing the experiences of the Bunkers, a senior couple from Utah who were called to serve in the Ecuador Quito Mission. Elder Bunker had learned Spanish decades ago during a Church mission. Sister Bunker spoke no Spanish. But they went in faith, not knowing what to expect.

The Bunkers were assigned to a branch with a large number of less-active members. Their humility and willingness to serve quickly won over the branch leaders and members. Despite her limited Spanish, Sister Bunker began teaching piano lessons on donated keyboards to youth and young adults in the branch. Soon music accompanied the singing of hymns during Sunday meetings.

Thanks in large part to the Bunkers’ guidance and encouragement, young people from the branch began answering full-time mission calls. The couple also helped organize a building project among members to construct a home for a family of orphans in the branch. They even facilitated speech therapy for a young elder serving in the branch—helping him manage his stuttering while building his confidence to teach and share the gospel with others.

Later, the Bunkers were assigned to work in the mission office.

Countless lives were blessed in Ecuador because of the humble efforts of a senior couple from Southern Utah. The contributions of the Bunkers demonstrate five key points in senior couples’ service, taught Bishop and Sister Waddell:

Third, senior couples can have a positive impact serving among young elders and sisters.

Fourth, senior couples “are marvelous at reactivation and retention.”

And fifth, senior couples are a great addition to any mission office.

Prior to their presentation, the Waddells reached out to some of the returned missionaries that they had served with in Barcelona, asking them about their experiences working with senior couples.

Wrote one missionary: The senior couples had “such a radiating love about them that they just made you feel happy and at peace in such stressful and hard times. This was such a comfort to me as a young 20-year-old. They gave such a great example of Christlike love.”

Sister Waddell emphasized the importance of revelation while working with senior couples.

“When the Lord provides you with this precious gift of senior couples, it is not always immediately clear how best to use their talents and where they should serve,” she said. “As with the young missionaries in your care, your responsibility is to turn to the Lord for direction and inspiration.”

“As you interview them, express your love and your gratitude for their willingness to serve,” said Bishop Waddell. “Help them see the vision of the great service that they can perform. As you orient them, give special attention to the ways in which couples differ from younger missionaries, including different expectations for couples.”

The Waddells concluded their remarks with instruction given by then Elder Russell M. Nelson of the Quorum of the Twelve Apostles:

“When we think of missionaries, we generally picture in our minds young men with shirts and ties and young women dressed modestly. But along with them are marvelous senior missionaries who have answered the pleadings of prophets and apostles for more missionary couples.

“I express gratitude for our senior missionaries. They are young in spirit, wise, and willing to work.” 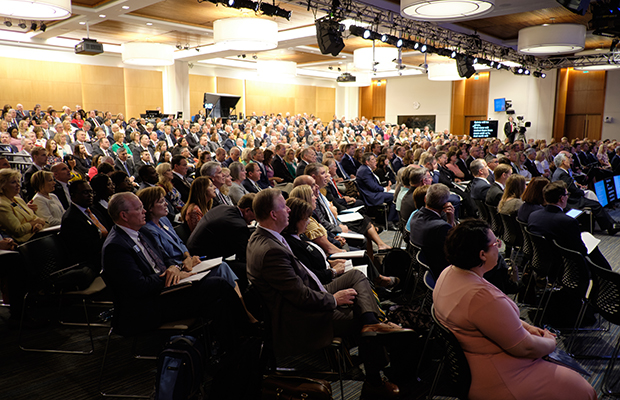 New mission presidents and their companions listen to instruction and counsel from Church leaders during a session of the 2019 New Mission Leadership Seminar at the Provo Missionary Training Center, which was held June 23-25. 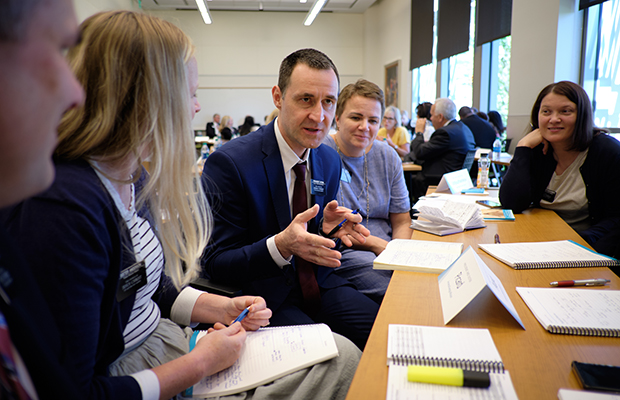 A new mission president gives a comment during a breakout session of the 2019 New Mission Leadership Seminar at the Provo Missionary Training Center, which was held June 23-25.