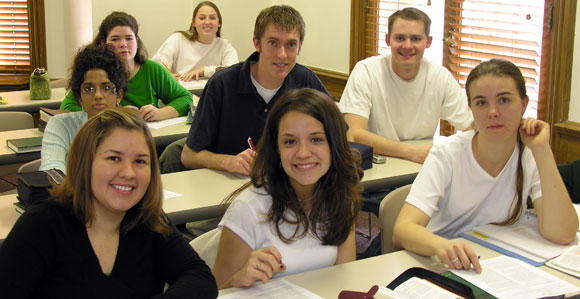 “Seminary gives me the strength to continue to keep moving forward in the straight and narrow path in spite of the difficulties and challenges I encounter. The things I have learned in seminary are the stepping stones and preparation for a greater and more profound knowledge of the gospel.” —Dia Lacno, seminary student in the Philippines

Milton Reis of Portugal goes to the local chapel. Frazer Cluff of Tasmania, Australia, attends at home with his mum as his teacher. Lauren Homer of Utah, USA, walks across the street to attend during second period of high school every other day; Ben Gilbert of Vermont, USA, participates weekly, right before Mutual; and in Alabama, USA, McKenzie Morrill attends daily via web conference. Daun Park of Korea participates at 10:00 p.m., while Jamie Greenwood of New Mexico, USA, gets up at 4:00 a.m. to be able to get to her 5:15 a.m. class on time.

All of these teens—and nearly 370,000 others like them—are following prophetic counsel to make seminary a priority in their lives, particularly this month, as students in many parts of the world return to seminary and to school.

The seminary program, which celebrates its 100th anniversary in 2012, has been implemented differently over the years, and even today individual needs and local circumstances often necessitate adaptation. But across time and distance, one thing remains the same: gospel study is helping anchor teens in their testimonies of the Savior and His gospel.

As Elijah Bugayong, 17, of the Philippines approached her final year of high school—and of seminary—she thought about having always been second in her high school “batch,” or class. That year, she was determined to secure the honor of being first. She told herself that she would do anything to reach that goal, including giving more time to academic subjects. She even considered foregoing seminary until one day, when she had a poignant experience.

“I [looked at] my study table,” she explained. “I saw a pile of books and near it, my quadruple combination together with my seminary notebook and manual. Deep inside I asked myself, ‘Which matters most?’”

She prayed and later found her answer in Matthew 6:33: “But seek ye first the kingdom of God, and his righteousness; and all these things shall be added unto you.”

From that point on, she put extra effort into balancing her time so that she could still faithfully attend seminary and excel in her academic performance. At the end of the year, she was named valedictorian and won a scholarship that would help her with her university expenses.

When Milton Reis, 17, of Portugal, first began participating in seminary, a small group of youth met together each Saturday because many of them participated in sports and other extracurricular activities that required training and other events daily.

Now, however, Milton attends seminary during the week—sometimes before school and sometimes after. For Milton that means waking up earlier, and in some cases giving up social opportunities in the evenings in order to attend class.

Even so, Milton doesn’t see seminary as a sacrifice. “It’s more like a privilege,” he said. Milton hopes to follow in the footsteps of his sister, who is currently serving a mission, and seminary is one of the ways he is preparing. “Through all of these challenges, I know it is worth it,” he said.

The Benefits of Gospel Study

Dia Lacno, 18, of the Philippines, was baptized at age 14 and began attending seminary soon after. She expected class to be like a typical school course, where she had homework, lectures, and the pressure that accompanies them. Instead, she said, “seminary gives me the strength to overcome all those loads that I get from school. Whenever I attend seminary, I feel replenished and at ease.”

Because she didn’t grow up with the gospel, she is grateful for the foundation that seminary is creating for her.

“Seminary gives me the strength to continue to keep moving forward in the straight and narrow path in spite of the difficulties and challenges I encounter,” Dia says. “The things I have learned are the stepping stones and preparation for a greater and more profound knowledge of the gospel.”

But seminary isn’t only about what happens in class; seminary students know that personal study is a crucial element of gospel learning. Daun Park, 18, of Korea, identifies with what President Gordon B. Hinckley (1910–2008) taught about scripture study: “I hope that for you this will become something far more enjoyable than a duty; that, rather, it will become a love affair with the word of God.”1

“I always remember this when reading the scriptures,” she said.

Through seminary, Frazer Cluff, 17, has also come to appreciate how much he can rely on the scriptures.

“Whenever I am having a tough time, I can read the scriptures and find solace in them,” he says. “I love reading about faithful Saints before my time who lived worthily and tried their best to exemplify Christ.”

A Variety of Blessings

Frazer says that in addition to the spiritual blessings of seminary, he’s found social blessings too. For instance, when his family moved from Queensland to Tasmania, Australia, he didn’t know anyone at school. But at seminary, he was able to find instant friends.

“It was a relief to know that I had an automatic source of social interaction in Mutual, seminary, and church,” he says. “There is something … unique about forming strong friendships with people who love the gospel like you do, have the same standards, share common goals, and believe the same things.”

Ben Gilbert, 16, of Vermont, USA, knows that he “can and will make a great missionary because of the things [he’s] learned in seminary.” He also recognizes that the blessings of missionary work aren’t limited to his future full-time service.

“I’m one of two members at my school, so I get a ton of questions about the Church and about what my life looks like,” he says. “When I tell [my friends] about the seminary program, they think it’s cool and unique.”

Jamie Greenwood, 16, of New Mexico, USA, has also found in seminary positive ways to respond to questions about the Church. “My peers have questions all the time,” she said, “and I don’t always have the answers. I don’t want to lead them astray, so I tell them that I don’t know but that I’ll find out. Seminary is a good place to ask those same questions and to talk about the answers—especially with kids your age, since they often know the best way to respond to a peer or a friend.”

McKenzie Morrill, 15, attends seminary via web conferencing because the distance between the local chapel and her school in Alabama, USA, make attending in person difficult. She recognizes that the approach is anything but traditional, but the experience, she said, is still powerful.

“Every time I read the scriptures in the morning or participate in seminary before school, I feel a whole lot happier all day long, and I focus better in school,” McKenzie said. “I get the idea of having the spiritual part of my life in place before the school part. It’s a huge blessing.”

As tremendous as these benefits are, perhaps the greatest result of seminary, many students say, is a stronger testimony. Lauren Homer, 16, of Utah, USA, remembers a time when her teacher was sick and had lost his voice, so the class had a “silent lesson” where they watched an electronic presentation with scriptures about the Savior.

“It was probably one of the most powerful lessons I’ve ever had,” she recalls. “We relied on the Spirit to be our teacher, and for the first time, I realized that the Atonement didn’t account just for our sins but also for our trials and sufferings. I realized that the Savior understood me and how I feel. I wouldn’t have had that experience had it not been for seminary.”

Such powerful moments have come for Spencer Douglas, 18, of Alabama, USA, as well. He remembers one particular time when his teacher was talking about the Savior’s visit to the Americas, recorded in the Book of Mormon.

“[It’s the part in 3 Nephi 9:15–18 where] Jesus Christ … reaffirms to them that He is the Christ,” Spencer explained. “I felt the Spirit so strongly that I was moved to tears. … It strengthened my testimony in Christ because I realized that no matter what goes on in my life or where I am, Christ is right there beside me.”

Spencer knows that seminary exists to help the youth of the Church get to know themselves and each other spiritually by studying together and learning the scriptures. He also knows the program is as much about preparing youth for the future as it is about fortifying them in the present.

“I believe [the Church has] this program to help the youth prepare for the future such as to become missionaries, Sunday School teachers, and leaders in the Church,” he said. “In order for the youth to be the future, they must first learn and understand the scriptures and the doctrines [of the Church].”

For Elijah in the Philippines, “the future” is already here. Months ago, she was a seminary student. And now, just shy of her 18th birthday, she is serving as a seminary teacher. Although she feels some trepidation, she says she is committed to “give my all in magnifying this calling” because of “the miracles seminary brought to my life.”