Seek and Speak Out for Peace, Elder Uchtdorf Urges During Volkstrauertag Service 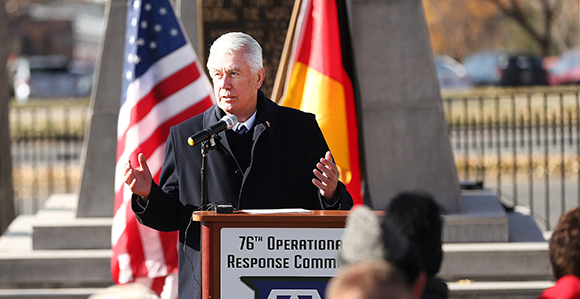 Elder Dieter F. Uchtdorf of the Quorum of the Twelve Apostles of The Church of Jesus Christ of Latter-day Saints speaks during the German Day of Remembrance (Volkstrauertag) at Fort Douglas Military Cemetery in Salt Lake City on Sunday, November 18, 2018.

“Volkstrauertag was a solemn reminder of the causes that lead to the tragedy of war and the need to do everything in our own individual power to preserve and regain peace, or at least to clearly speak out for peace.” —Elder Dieter F. Uchtdorf of the Quorum of the Twelve Apostles

Elder Dieter F. Uchtdorf of the Quorum of the Twelve Apostles and his wife, Sister Harriet Uchtdorf, recently traveled to Russia and other countries in Eastern Europe. While there, they visited Kaliningrad (Koenigsberg) and Gdansk (Danzig), two cities that were for many generations “beautiful and strong German communities.”

“At the end of World War II, these cities were totally destroyed,” said Elder Uchtdorf. “They became vast places of ruins and rubble, and all the survivors had to leave to the West. As Harriet and I looked at photos right there at the places of tragedy, our hearts almost stopped.”

Now, 73 years after the end of WWII, Koenigsberg is Russian and Danzig is Polish.

“Nazi Germany, my country, started the events of WWII,” he said. “I think to recognize that and find ways to prevent these things in the future, that is our task, that is what we need to take care of.”

That was part of the message the Apostle shared during the annual Volkstrauertag event at Fort Douglas Military Cemetery in Salt Lake City on November 18. The gathering, held each year on the German National Day of Remembrance, pays tribute to German prisoners of war—and others—who are buried in the cemetery.

“Today, we are gathered here at the historic Fort Douglas cemetery to remember the 41 German soldiers who died as prisoners of war after WWI and WWII and are buried here,” said Elder Uchtdorf. “They are buried next to many of their brothers in arms from different nations. I think that is very important that we try to learn from these challenges.”

With the podium set up in front of a mass grave honoring 41 German soldiers who died as prisoners of war while at Fort Douglas during World War I, Elder Uchtdorf spoke of the soldiers who paid the price of historic consequences.

“But recent history has also proven that the work toward reconciliation and peace can bring long-lasting peace and friendship between past enemies,” he said.

For Elder Uchtdorf, who is from Germany and served in the German Air Force, the day is personal.

“It is indeed a day of remembrance and a day of mourning for all who died in wars, but it is much more,” said Elder Uchtdorf. “The commemoration and service include the victims of violent oppression because of race, religion, or conviction.”

In Elder Uchtdorf’s family as he grew up, Volkstrauertag was “never only a day to mourn the dead,” he said.

“Volkstrauertag was a solemn reminder of the causes that lead to the tragedy of war and the need to do everything in our own individual power to preserve and regain peace, or at least to clearly speak out for peace.”

The day is an opportunity to look back at what has happened in history and a reminder that there are ways to protect peace.

“Individually and as a people we can and should be a people of peace and reconciliation,” Elder Uchtdorf said. “I consider this as one of our prime responsibilities toward our children and their children. … It takes empathy and action to influence the future of mankind based on dignity, honesty, and eternal values.”

Not only is Volkstrauertag a day to remember the past; it is a day for individuals to commit to heartfelt effort to craft peace. Being a positive change in the world comes through Christlike compassion and empathy for all.

“Our desire and our action to help someone who is sick, who is hungry or in trouble will bring peace and reconciliation not only to our personal lives, but to those around us and to the communities we are living in and eventually to the whole world,” he said. “Therefore, every day can and should be a day of reconciliation, even a joyful day of new beginning.”

“We honor the memory always of the service of those whose remains are in the cemetery,” said Utah Governor Gary R. Herbert. “While we remember our shared past, we also celebrate our shared ties today and our shared optimism that the future relationship between Utah and Germany will forever become stronger and more mutually beneficial as we both become lights and examples to the world.”

Recognizing the loss Utah citizens recently felt at the death of Major Brent R. Taylor, a Utah National Guardsman and North Ogden mayor who was killed while deployed in Afghanistan, Governor Herbert spoke of the sacrifice that continues today with soldiers.

“Volkstrauertag, or National Day of Mourning, has been officially observed since 1948,” said James T. Burton, Honorary Consul, Federal Republic of Germany. “While it was originally organized to recognize those that had died at war, its purpose was ultimately expanded in 1952 to recognize all those who suffered or died as a result of the violence of oppressive governments, whether civilian or military, and from every nation of the world.”

Today the celebration is an opportunity to join together in respect for those who have sacrificed and gone before, as well as a reminder to move forward with gratitude and love for others who may think or act different, Burton said.

“As we commemorate this sacred event this Sunday, I hope we can all be committed to being more tolerant, particularly of those with whom we disagree,” Burton said. “I believe we truly can … disagree without being disagreeable.”

For Vern Gorzitze, attending the annual event has become a tradition for more than two decades.

“My father was born in Berlin, my mother in Frankfurt, and they met here [in Utah] in Sunday School,” he said. Coming to the event honors not only those who have died but also his family and heritage.

“This is really special to us,” said Gorzitze’s wife, Ilene, “to hear the choir and speakers and appreciate those who have gone before.” 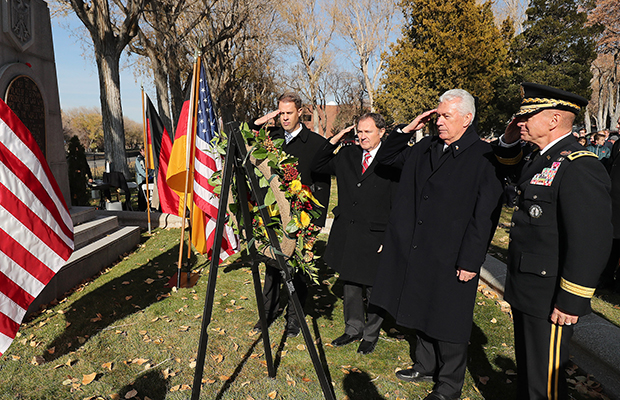 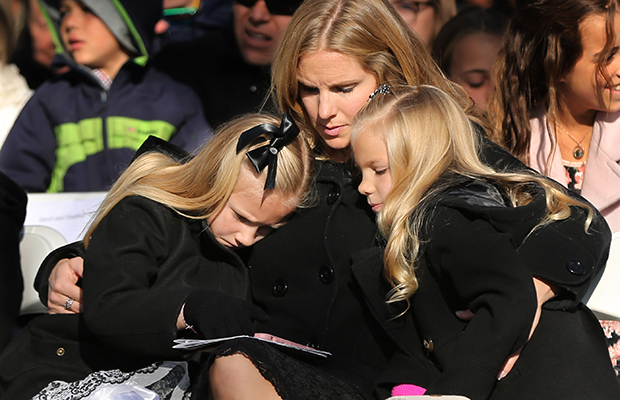 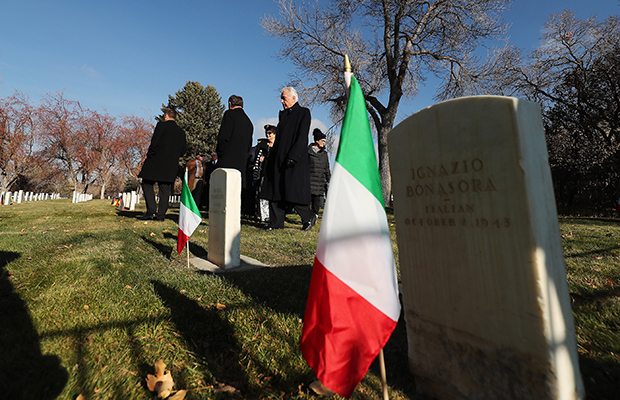 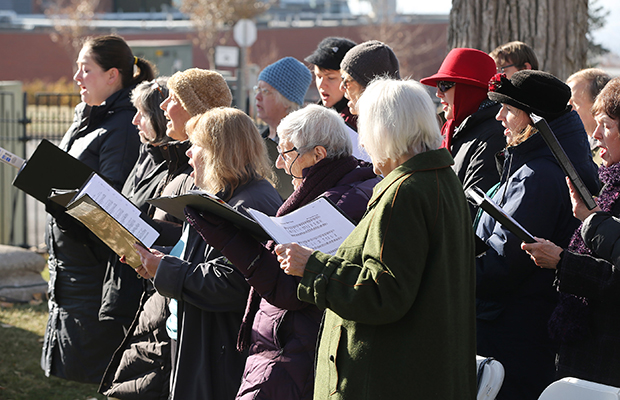