Scripture Verse Inspired Sister Oscarson to Rely on the Lord 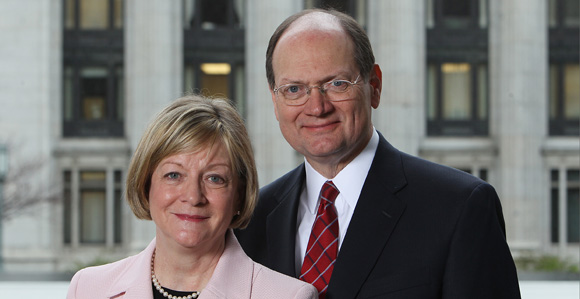 “The Lord always comes through when it is His work and when something important is on the line.” —Bonnie Lee Oscarson, Young Women general president

Pregnant with her fourth child, Bonnie Lee Green Oscarson was just 25 years old when her husband was called to serve as president of the Sweden Göteborg Mission.

Not knowing how she would accomplish the task ahead of them, Sister Oscarson and her husband, Paul, turned to the scriptures. They read the biblical account of Abraham and Sarah, who were “old and well stricken in age” when they learned they were going to have a baby. Sarah laughed at the news. But the Lord responded, “Wherefore did Sarah laugh … ? Is any thing too hard for the Lord?” (Genesis 18:11, 13–14).

As they prepared to move their young family to Sweden, the passage “Is anything too hard for the Lord” took on great meaning for the young couple.

Just one week before attending the Church’s Seminar for New Mission Presidents, Sister Oscarson gave birth to a little girl. The couple named her Sarah.

With newfound courage from the scriptures, the Oscarsons packed up their young family and moved to Sweden. During the next three years, Sister Oscarson offered talks in Swedish and learned to cook for large groups of missionaries and Church members. The couple’s fifth child arrived in the mission field.

“The Lord always comes through when it is His work and when something important is on the line,” said Sister Oscarson. “He will help you get the job done.”

Now, years later as she serves as Young Women general president, Sister Oscarson said she will once again remember the lesson she learned from the biblical account of Abraham and Sarah and rely on the Lord to accomplish the tasks ahead.

When her parents decided they wanted their children to experience the Church outside of Utah, her father told his company he was willing to be transferred.

Bonnie, then 9, and her family moved to Oklahoma. The family also lived in Colorado and Tennessee. In Nashville, Bonnie was the only Latter-day Saint young woman in her high school. Faced with sharing her identity as a “Mormon girl” or hiding it, Bonnie decided, “I am going to stand up and declare who I am.”

She arose at 4:30 a.m. to attend early morning seminary and “solidified my testimony of the scriptures and the gospel.”

Bonnie’s father, who worked as a sales manager for Phillips Petroleum Company, served as district president; her mother was district Relief Society president.

They met wonderful people and saw the Church function in areas where membership was small.

Soon, the family moved to Missouri, where Bonnie met Paul Kent Oscarson at the Far West, Missouri, temple site—a place with family significance because they both have ancestors who lived in the Far West area.

After attending BYU, the couple married December 19, 1969, in the Salt Lake Temple; seven children would eventually join the family.

Within a few short years, Brother Oscarson—who had served full-time in the Swedish Mission from 1965 to 1968—was called as a mission president.

When the Oscarsons returned from the mission field, they lived in Missouri, New Jersey, Massachusetts, and Texas, where Brother Oscarson worked as a department store regional vice president.

Like her parents, Sister Oscarson found great joy in living in areas where her family could help the Church grow.

“The Lord provided opportunities to expose me to the Church in smaller areas,” she said.

The family enjoyed spending time together. Sister Oscarson took the children to museums, parks, and zoos. When the family moved, Sister Oscarson followed the example of her own mother and helped her children embrace a new school and community. Brother Oscarson said of his wife, “She was the kind of mom that said, ‘This move is an adventure.’ She always found interesting things about the new place.”

In 2009 the couple had the great opportunity to return to Sweden to serve as president and matron of the Stockholm Sweden Temple.

The devotion of the Latter-day Saints in the temple district inspired President and Sister Oscarson.

“When people come to the temple in Sweden, they often come and stay for a week and spend every minute in the temple,” he explained.

The first former temple matron to serve as Young Women general president, Sister Oscarson was particularly impressed with the youth she met at the temple in Sweden.

“I don’t think I will ever be the same after having seen their example,” she said.

Now she hopes to remember those lessons as she reaches out to young women across the globe.

“It wasn’t our temple,” Sister Oscarson added. “It wasn’t our work. It truly was the Lord’s work. He was aware of everyone that came through the temple doors.