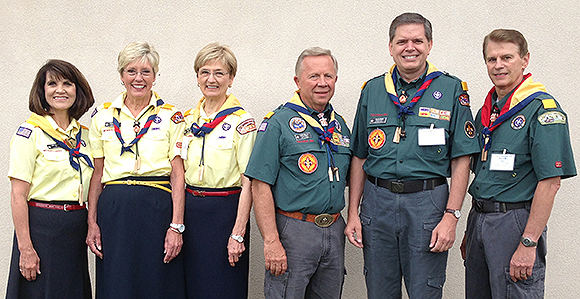 “Better than Disneyland” were the words used by one young girl to describe her week at Philmont Scout Ranch with her family.

For two weeks each summer, a week-long Priesthood Leadership Conference on Scouting is held at the ranch under the direction of the Young Men and Primary general presidencies with assistance from the LDS-BSA Relationships office. Stake leaders are invited to attend the course with their families. This year, the conference was held June 28-July 4 and July 5-11. More than 300 priesthood leaders from 151 stakes attended, with their combined family members totaling more than 1,100 participants.

“Scouting is a tool for preparing boys for the priesthood,” said Sister Rosemary Wixom, Primary general president. “The Scouting program and the principles of the gospel of Jesus Christ help young men become strong priesthood men and fathers.”

“The purpose of these conferences is to train stake leaders in the functions of Scouting within the Aaronic Priesthood,” explained Brother Larry M. Gibson, first counselor in the Young Men general presidency. Helping young men to “learn, act, share” was a main focus of the conference.

“Applying the suffix ‘ing’ to learn, act, and share makes those principles present, continuous and progressive,” taught Brother Beck. “Then we bring power to this week at Philmont, and participants extend that power to their stakes, quorums, and families.”

Spouses and children may also attend the conference. The families sleep in “tent city,” participate in age-group activities, and eat together in the cafeteria.

“Philmont is unique because of the sacrifice of the people who come here and the spirit they bring—a spirit of unity and love for the gospel of Jesus Christ,” explained Sister Wixom. “We celebrate the children and families, too, here at Philmont. Children thrive in the environment of Philmont and make friends from all over the country.” The children’s parade is a highlight of the week, where Primary children make and wear costumes and parade to music with the Primary presidency while parents cheer them on.

This year marked the 51st priesthood conference at Philmont. In 1963, a Mormon Leaders’ Conference was initiated by general Church leaders in an effort to help stake leaders fully understand the coordination of Scouting and priesthood functions. Fifty stake presidents and their families attended the first conference at Philmont Scout Ranch, which had visits from Elder Delbert L. Stapley and YMMIA Superintendent Carlos G. Smith. During subsequent years, Young Men and Primary general presidency members and board members have served as faculty. The conference has had several names including “Mormon Leaders’ Training Conference,” “Mormon Scouting Workshop Conference,” “Seminar on Aaronic Priesthood and Scouting,” and the current title, “Priesthood Leadership Conference on Scouting.”

The Philmont Training Center at Philmont Scout Ranch provides a unique and inspiring setting for the conference with both indoor classrooms, an assembly hall, plenty of beautiful, green lawn areas, and a spacious outdoor campfire bowl. “Philmont is a place of revelation,” commented Brother Beck. “The outdoors provide an opportunity to hear the voice of the Lord.”

In 1938, philanthropists Waite and Genevieve Phillips (brother to the Phillips 66 founders) donated to the BSA a gift of land that later became Philmont Scout Ranch. The Phillips believed that “the only things in life we keep permanently are those we give away.” Today, Philmont Scout Ranch encompasses 214 square miles of wilderness in the Sangre de Cristo Mountains of northern New Mexico. Approximately 30,000 participants visit Philmont each year to enjoy backpacking treks, horseback cavalcades, and training and service programs for both Scouts and leaders. This summer, the millionth Scout will visit the ranch.

Older children at the Priesthood Leadership Conference, ages 14-18, may participate on a backpacking trek through the backcountry of Philmont. Although the trek is fairly strenuous and involves low-impact camping, Joshua Boswell, 16, from the Warrensburg Missouri Stake reported, “When we put the Lord first, He helps us to do hard things.”

“The days we hiked were hard, but we were able to pull into camp those nights and say, ‘We did it,’ ” added his younger brother, Jared, 15. After approximately 35 miles of backpacking, the returning trekkers were greeted on the last day of camp by their families and Church leaders with banners, music, and lots of hugs and smiles. “Hiking 15 miles in one day is hard,” said Hyrum Boswell, 14. However, a sacrament meeting message about gratitude from Brother Beck at the beginning of the week especially touched him during the trek.

Their mother, Margie Boswell, stated, “The Philmont experience was one of family togetherness and support.” She participated with the other spouses in a variety of activities including classes, crafts, tours, and hikes, while young children were cared for by age-group leaders and priesthood brethren attended classes.

Sharing was a common theme throughout the course.

“We don’t truly become like Christ until we have shared,” taught Brother Randall Ridd, second counselor in the Young Men general presidency. “When we share the light we have, it has eternal consequences. Sharing primes the pump of revelation.”

In the spirit of sharing, conference attendees were encouraged to record their testimonies and stories of Scouting and the priesthood through writing, film, and voice recordings.

“It was inspiring,” commented Mark Francis, LDS-BSA Relationships director. “Over 65 stories were shared and recorded in just the first week. Especially touching were the stories of families who have joined the Church through Scouting, young men who have been re-activated through Scouting, and youth in our communities whose lives have been changed through Scouting involvement. These stories will be a strength to other Scout leaders, Church leaders, parents, and families.”

Throughout the week, the Spirit was abundant in the classes, activities, and interactions of the families.

“It was amazing,” said President Bruce Priday from the Lenexa Kansas Stake. “I’ve gained a greater appreciation of the Lord’s love for boys and young men and their divine potential. They are destined to become husbands and fathers, and I have a greater vision of the importance of family.”

“This is what Zion is going to be like,” said Shaun Bair from the Clinton Utah West Stake.

When asked what he learned during the conference, Clinton Utah West Stake President Jeffrey Rosenlund shared, “I recognize the interplay between Scouting and the priesthood and how essential it is to run the Scouting program. This was an incredible life-altering experience for me.”

His 13-year-old daughter, Audrey, commented at the end of the week, “I don’t want to go home. I’ve never felt so loved.”