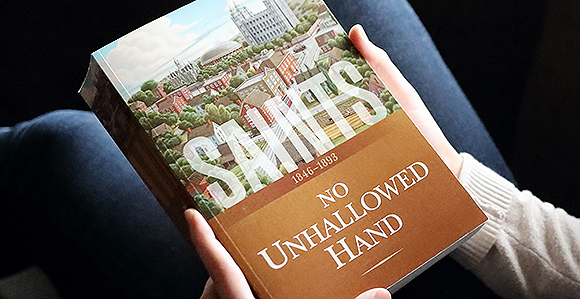 “It’s a really significant period for the history of Latter-day Saint women, for what they accomplished and for the sense of themselves that they developed and their courage and ability to stand up and proclaim their voices.” —Lisa Olsen Tait, editor

As Zina Young and Emmeline Wells traveled by train to attend a conference of women at the 1893 World’s Columbian Exposition in Chicago, their thoughts returned to the past. The Latter-day Saint women leaders reflected on the many trials and triumphs over the previous 50 years.

“When we go hence to our rest after our sacrifices indescribable, may it be like Utah’s most beautiful sunsets, that many in the future may have reason to praise God for the noble women of this generation,” Young later told Wells.

This exchange—which can be found toward the end of Saints, Volume 2, No Unhallowed Hand, 1846-1893—encapsulates precisely one insight Lisa Olsen Tait hopes readers take away from the new volume, which was released on February 12.

“It’s a really significant period for the history of Latter-day Saint women, for what they accomplished and for the sense of themselves that they developed and their courage and ability to stand up and proclaim their voices,” said Tait, an editor of volume 2. “I hope readers come away with a greater appreciation for the women of the Church in this era.”

A greater appreciation for the early women of the Church is one of many insights Saints, Volume 2 editors and writers hope readers gain. The new volume also features unique native voices, historical context surrounding controversial issues, and a lesson on God’s dealings with His covenant people.

The second volume of the four-volume history commissioned by the First Presidency narrates the Saints’ journey west and settlement in the Salt Lake Valley, the expansion of missionary work to many nations, and the building and dedication of the Salt Lake Temple—or how the Saints kept the faith while enduring “sacrifices indescribable.”

Many Latter-day Saints might be familiar with this story. But they’ve likely never read it with insight from Jonathan Napela—a native Hawaiian Saint who helped George Q. Cannon translate the Book of Mormon.

“Over and over again, you see native voices and native peoples that have never been part of our story before,” said Jed Woodworth, managing historian of volume 2.

Many readers of volume 1 said they discovered new stories they had never heard of, explained Angela Hallstrom, volume 2 writer. “I think you’ll find that more and more often with volume 2.”

“There will be all kinds of interesting people and exciting events and difficult events that generally we are not as well aware of,” she said.

One example of a difficult event is the persecution the Saints faced in the 1870s and 1880s for practicing plural marriage. “We know a little bit about it, but I think volume 2 really brings home the extent of just how much pressure the Church was under and how much people were suffering,” Hallstrom said.

Another example is the first decade of settlement after the Saints reached the Utah valley, Tait added. “People tend to think they know the pioneer story, but we tend to end that story when the Saints enter the valley.

“In the 1850s, they went from near starvation, to handcart disaster, to the Army coming to Utah, to the Mountain Meadows Massacre,” Tait said. “It just shows what a rough, bumpy road that was”—not to mention the many women settling a new area on their own while their husbands were serving missions.

Scott Hales, a general editor for Saints, Volume 2, said the Mountain Meadows Massacre is one of several controversial events and topics readers will find in the new volume. Plural marriage and racial restrictions on the priesthood are others.

“Really, I just hope more Saints will own their story as they learn it.” 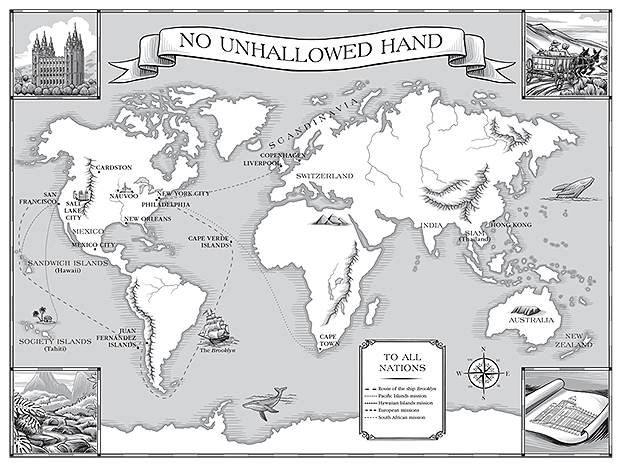 This map shows the locations described in Saints, Volume 2, No Unhallowed Hand, 1846–1893.

A Theme of Deliverance

Another takeaway from Saints, Volume 2 is God’s dealings with His covenant people, Woodworth said. This theme parallels what Church members are currently studying in the Book of Mormon with Come, Follow Me this year.

The “power of deliverance” illustrated in the Book of Mormon can also be found in Saints, Volume 2. The difficulty and opposition the early Saints faced helped them grow and develop as well.

Compared to Kirtland, Nauvoo, and Jackson County, the Salt Lake Valley provided much more space for settlement, which “allowed them then to dramatically increase the size and scope of the gathering project,” Woodworth said.

In volume 1, Saints gather from the United Kingdom and Canada. In volume 2, Saints start gathering from all parts of the world. “By the end of volume 2, the Saints are some 200,000 people, and most of them are in the Great Basin. That never could have been possible had they remained in Illinois or Missouri or Ohio,” he said.

Hales said the theme of deliverance is also reflected in the subtitle of the volume—No Unhallowed Hand, a quote from the “Standard of Truth” in the Wentworth Letter, written by Joseph Smith.

“Readers might ask themselves, What are the ‘unhallowed hands’ that are trying to stop the work from progressing?” Hales said.

“They were able to overcome these obstacles and achieve the thing they set out to do—which was to establish Zion and build a temple and continue the work the Lord had for them.”