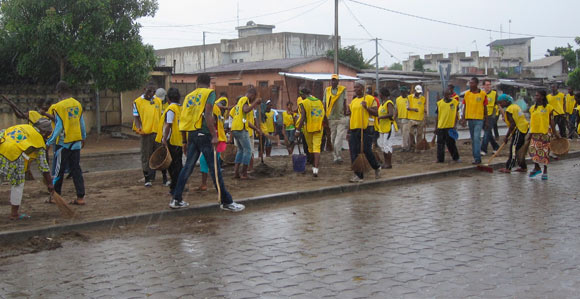 While participating in Mormon Helping Hands projects across Africa on August 18, 2012, members of the Church rendered valuable service, built interfaith relationships, raised awareness of the Church, and built their testimonies of charity.

Saturday, August 18, 2012, saw thousands of Saints across Africa gather in their communities for the sixth time in six years to participate in the annual All-Africa Mormon Helping Hands Day.

Since 2007, Church members from stakes and districts throughout the continent have sponsored service projects ranging from crafting to filling potholes and cleaning buildings for the day of service.

Last year, Elder Adesina J. Olukanni, an Area Seventy who serves as the director of public affairs for the Africa West Area and who served as public affairs director when the Day of Service began in 2007, explained that the event offers a simple and easy way of living the gospel.

Public Affairs missionary Elder C. Terry Warner commented that the Church in Africa is growing quickly in faith and devotion.

“The wards and branches generally went all-out to render significant service,” Elder Warner wrote in an e-mail. “They recruited partners; they chose projects that, though difficult, really mattered. They came out in large numbers anxious to help, and they truly made friends for the Church.”

Below are accounts of just a few service projects that occurred throughout Africa for this year’s All-Africa Mormon Helping Hands Day.

The Ghanaian publication Daily Guide reported on a service project by the Kumasi Ghana Stake that included cleaning up several health facilities. Approximately 1,226 members from more than a dozen units cleared weeds and cobwebs, de-silted gutters, and cleaned the facilities of the Kumasi Central and Children’s Hospitals.

The representatives of the two hospitals were grateful for the service, and the environmental officer of Kumasi South Hospital even requested that the project become a routine occurrence, since the work was so helpful in improving the environment around the hospital.

Stake President Richard Samche said that “service to humanity was service to God.”

In Accra, the Kaneshie Stake’s six units each participated in the day of service—cleaning local parks, beautifying different areas of the city, clearing weeds, and cleaning gutters—while 400 members of the Adenta Stake participated in similar service at the University of Ghana Hospital and the Legon Police Station.

Comfort Owusu-Sekyere of the Madina 1st Ward said, “The service project brings about togetherness and provides the opportunity to actualize service principles of the gospel. Cleaning the children’s ward, for example, helps us to interact with others.”

Local member M. O. Sackey reported, “Members of the Church undertook the service project with such enthusiasm and thoroughness that the authorities at both the university hospital and the police station expressed utmost satisfaction and wished that the Church would select the two institutions once again for the next service project.”

At the South Municipal Hospital in Accra, 280 members of the Kasoa Stake dedicated several hours cleaning as well.

Elsewhere on August 18, 450 members of the Cape Coast Ghana Stake’s 10 units assembled at 6:30 a.m. to work on various projects for the next five hours.

Those who worked at the hospitals and local clinic had the opportunity to clean floors, clear bushes, and gather refuse. Others who worked on roadsides and streets also cleared weeds and collected refuse.

In Ho, Ghana, more than 100 members of the Ho Branch, along with six nonmembers, held a service project at the Office of the Regional Secretary. Volunteers weeded, swept, cleaned, and improved the area around the building.

Branch members commented that it was good to see so many Saints participate, and several passersby expressed appreciation for their work and example of service.

A letter from the district police commander, Ayamga Yakubu Akolgo, expressed gratitude: “The tidiness of the police premises was impressive and meticulously done . . . in a manner not seen since its construction. You have really lived up to the Bible teachings that cleanliness is next to godliness. We . . . wish to thank you once again for your tremendous assistance that [will] forever be cherished.”

Nearly 150 volunteers from the Cocody Cote d'Ivoire Stake cleaned the interior and exterior of a local police station.

“This is a very civic act,” remarked the police station chief’s assistant. “This should be an example for all the community. I pray my Lord for the fast growth of your church in the country.”

Members of the Abobo Stake cleaned hospitals in two different locations. In one, they mowed lawns and cleaned each room, while at another, they were not allowed to clean inside and so focused their efforts on picking up garbage and emptying trash.

And in Yopougon, Abidjan, members of the Toit Rouge Stake cleaned public gutters and streets in front of the Ivorian National Institute for the Advancement of the Blind for three hours.

Members of the Niangon Stake also participated in service projects within the country on August 18.

In Nigeria the eight branches that make up the Umuahia District split up to hold several service projects simultaneously. They worked at market squares, health centers, public roadsides, city drains, and other public buildings.

At one location, more than 60 members gathered to clear a blocked drain. Umuahia Nigeria District President Chinenye Nwaogu reported, “Residents were amazed that people could embark on such an activity. Many of them [praised] the Church for leading such a commendable campaign.”

Some 372 miles (600 km) north, about 120 Saints from the seven branches of the Ile-Ife Nigeria District, along with all the full-time missionaries assigned to the district, also defied an early morning drizzle to render their community service in Sabo, in southwestern Nigeria.

Members of the Eleyele 1st, Eleyele 2nd, and Iremo Branches joined to clear gutters, dispose of rotting garbage, and disinfect the area. Branch leaders helped provide traffic control as Saints regularly crossed the street to dump waste into a sanitation truck. Local residents were also grateful for the opportunity the truck provided for them to dispose of waste they had accumulated in their homes and yards.

“Many of the passersby said it was incredible that this people could stomach the stench from the gutters without being paid for it,” Ile-Ife Nigeria District President Wahab A. Omiwole said, adding that many recognized the members as Mormons from the yellow vests they were wearing and had worn at past service projects. “To them, the cleanup exercise was indeed an answered prayer.”

The Urban Day, Ilesa, Osogbo, and Ipetumodu Branches, meanwhile, undertook projects at individual branch levels—cleaning a local maternity clinic, clearing gutters, and serving at a school for the handicapped.

In Delta, Nigeria, 50 members of the Ughelli Branch cleared weeds and cleaned around the Ughelli Central Hospital, and in Benin City, the Ikpokpan and Ugbowo Stakes spent several hours filling potholes along multiple roads.

Members of the Eket Nigeria Stake undertook 10 separate projects on the day of service in August, including landscaping, roadwork, and general cleaning.

Alexaxander Etuwewe of the Eket Nigeria Stake reported, “We had great time partnering with other organizations, [and] we all found joy in our Heavenly Father, who gave us the strength to carry out those projects from one area to another.”

In the Port Harcourt West Stake, Church leaders made a special effort to make sure each of the seven wards participated in the day of service. Members spread out over 50 miles (80 km) to render service at several hospitals and police stations.

Members of the Ibadan District in Nigeria also participated in the day of service, cleaning up a local hospital and other facilities.

In Akwa Ibom, Nigeria, the Ibiono District organized more than 500 members and 50 nonmembers into service projects in six locations.

District President Godwin Udofia wrote, “Villagers and community leaders expressed joy and showed the spirit of cooperation. . . . We see this as part of missionary work. Indeed, service has actually united our neighbors.”

The Uyo Nigeria Stake chose a local radio station as the site for their 2012 All-Africa service project. Work included grass cutting, the removal of waste from gutters, trimming of flowers, and general cleaning of the station and surrounding area. Full-time missionaries also participated and were able to teach some of those present more about the Church.

The general manager of the radio station expressed appreciation for the Church’s service over the radio the same day the project was completed. Members have reported that the service project helped create positive publicity for the Church among local citizens.

Across Sierra Leone, thousands of members assembled on August 18 to hold service projects. Members of the Freetown Sierra Leone Mission, for example, organized a project that involved 700 members and 60 nonmembers in cleaning the Sierra Leone Broadcasting Corporation’s buildings and several other important government offices.

At the Grafton and Kossoh villages, 370 volunteers planted 2,525 trees in an effort to protect the land’s natural features.

And nearly 300 volunteers from the Bo Sierra Leone District planted flowers at the Provincial Secretary’s Office and at the Local Administrative Court, while another 100 cleaned the Kenema State prison.

In Sada, South Africa, Elder Mxolisi Ndlovu of the South Africa Cape Town Mission reported about 45 members of Sada Ward made their way to a local nursing home. For four hours, members of the Relief Society scrubbed floors, rearranged furniture, and washed windows, while the men worked outside, mending the wall and fencing off the yard.

Some of those participating were nonmembers who had been invited by their LDS friends. “Despite their humble circumstance, these members are full of love in helping one another and being the example in their area,” Elder Ndlovu wrote.

At the end of the project, Bishop Antony Bovana encouraged the members to carry on serving the community and to be a shining example in their surroundings.