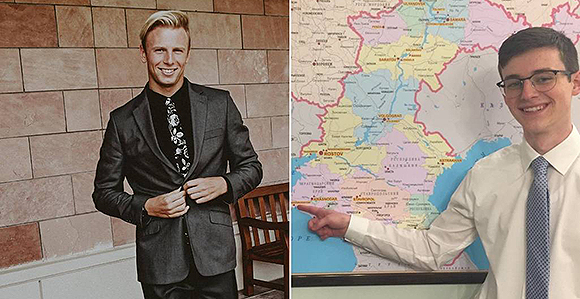 Two Latter-day Saint volunteers detained for nearly three weeks in Novorossiysk, Russia, have left for the United States, and their families are rejoicing and expressing relief.

Elder Kole Brodowski, 20, was near the end of his volunteer service and is returning home to Garden Grove, California. Elder David Gaag, 19, will be reassigned to serve as a Church missionary in a different mission.

Brodowski’s father exulted in a Facebook post, saying, “God is there, our prayers were answered” and “Hallelujah it’s over.”

“It’s finally over!” Kyle Brodowski wrote. “Kole is headed home, and his companion will receive another call. I want to thank the thousands of people worldwide that prayed for him/us and sent messages of comfort and support. There were many people I’ll never meet that worked day and night for the past three weeks to free these young men. Thank you to all.”

Gaag’s father, Udo, released a family statement on Wednesday morning, saying the family learned about his release in the last few hours.

“We are so relieved and happy about this news,” the statement said. “We spoke with David and he is healthy and in good spirits. He is happy that the detention is over but sad to leave his Russian friends. It is clear to us that he enjoyed his experience serving the Russian people and truly grew to love them.”

A spokesman for The Church of Jesus Christ of Latter-day Saints confirmed the news Wednesday morning.

Eric Hawkins said Brodowski and Gaag were treated well in detention and maintained regular contact with their families.

“The Church is closely monitoring conditions in Russia for all volunteers and will continue to fully comply with Russian law,” he added.