“Find out who you are, where you come from. … Find out what makes you different than anyone else. Find out what’s inside of you. That will give you the strength to not only go forward but embrace what your past is all about." —Emmitt Smith, former NFL player

Several years ago, Pro Football Hall of Fame running back Emmitt Smith had the opportunity to travel to Virginia and Alabama to trace his roots. This family history trip was documented in a March 2010 episode of the television series Who Do You Think You Are?

Smith shared insights from this experience during Saturday’s keynote at RootsTech in the Salt Palace Convention Center in Salt Lake City.

During his trip, he learned his ancestors were transported to the United States from the west coast of Africa via slave ship. He learned of his great-grandmother Mariah, who raised her kids in rural Alabama.

“Her whole mission was to keep her family together,” Smith told the RootsTech audience. She has been a “a pillar of strength that permeates through our lineage.”

While reading over documents in slave quarters in Alabama, Smith said he had a feeling he will never forget: “I had this sense that they were once lost and they are now found.”

Reflecting on his family history experience, Smith said, “I would encourage each and every one of you to do the same thing: find out who you are, where you come from. …

“Find out what makes you different than anyone else. Find out what’s inside of you. That will give you the strength to not only go forward but embrace what your past is all about.”

Smith, who had a 15-season career in the NFL and retired in 2005, is a father of five, works as an entrepreneur, and founded Pat & Emmitt Smith Charities.

“You should have seen the look on my dad’s face,” Smith laughed as he told the audience.

As Smith continued to tell his story—his first youth football game, playing new positions, later getting drafted to the NFL—he highlighted important lessons he has learned.

“Change presents an opportunity. … Be prepared to change. Be agile and mobile in life,” he said, adding the caution to not be narrowly focused and miss out on new opportunities.

When opportunities come, take advantage of them. “When you get your opportunity to shine, be prepared for the opportunity, and make it happen, because you might only get one chance.”

Another point was to follow guidance from coaches and mentors in life. “Sometimes people see things in you, you don’t see in yourself,” he said. “It’s amazing how people come into your life to give you direction, to give you guidance.”

Other lessons included the importance of teamwork, forgiveness, and treating others with kindness. “If we want to change the way the world is, it’s up to us,” he said. 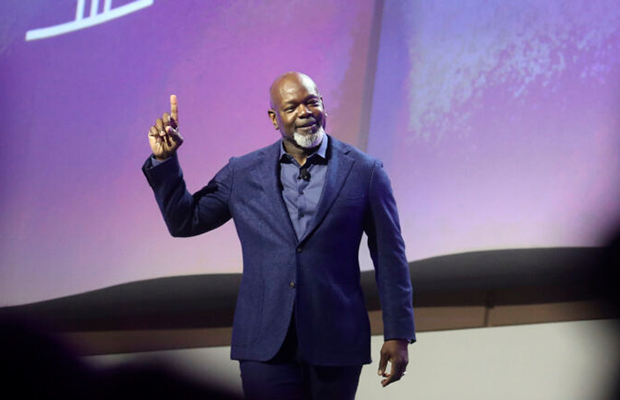 An estimated 30,000 attended RootsTech this week, and thousands more participated via livestream—not to mention the 20,000 who came to the youth activity night.

“I’m always impressed and overwhelmed that this many people care,” Elder Kevin S. Hamilton, a General Authority Seventy and executive director of the Family History Department, said during an interview on the final day of RootsTech.

And the impact of RootsTech and the family history community continues to expand.

Elder Hamilton said he spent time this week with archivists from Asia, Rome, Spain, and France who had never been to RootsTech before. “When they come and they look around and see all of this happening, it’s mind boggling. They can’t put it into words what they feel.”

“We saw this in London, and we see this here,” he continued. “This just unlocks the archives of the world. They are so much more amenable to partnering with FamilySearch to digitize records and index records and create publicly accessible access to all their files.”

Now the focus turns to RootsTech London 2020, which will be held November 5-7. 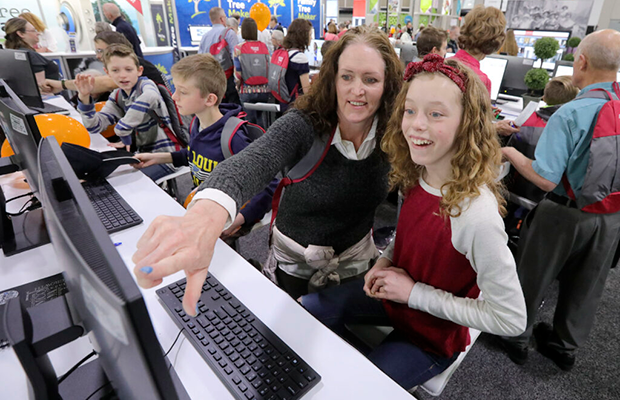 Melanie Gibby and her daughter, Anna Gibby, use Compare-a-Face to see what famous people and ancestors Anna looks like at the FamilySearch booth during RootsTech at the Salt Palace Convention Center in Salt Lake City on Saturday, February 29, 2020. Photo by Kristin Murphy, Deseret News.

FamilySearch CEO Steve Rockwood said these RootsTech “experiments,” as he describes them, have seen much success over the past 10 years, and he hopes they continue.

“Our purpose is to create experiences of joy … for all people as they discover, gather, and connect their families past, present, and future,” Rockwood said.

“We do that primarily online and with our app because that’s how millions can access it. But we have found that … it’s good to physically gather people.”

Rockwood sees potential in more “mid-tier” events, such as the family history conference in Mexico City that is happening for the third time this year around Dia de los Muertos.

He also sees a future in local events, like Family Discovery Days. Comparing these events to farmers markets, the goal is to attract people “who need to try the fruit,” he said. 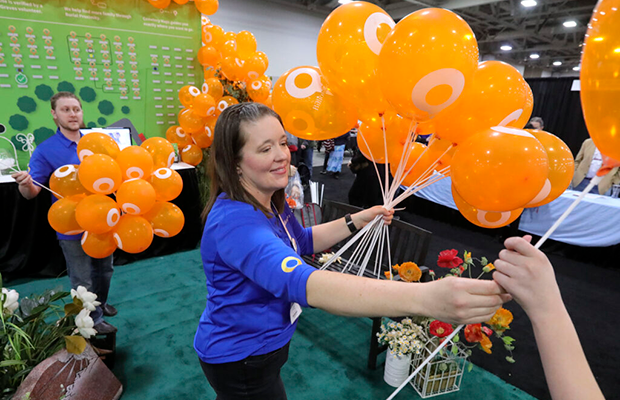 Anna Young hands out balloons at the BillionGraves booth during RootsTech at the Salt Palace Convention Center in Salt Lake City on Saturday, February 29, 2020. Photo by Kristin Murphy, Deseret News.