RootsTech 2020 kicked off Wednesday afternoon at the Salt Palace in Salt Lake City, Utah, with a celebration of its 10th year and a surprise: RootsTech London will happen again.

Later that evening, more than 20,000 youth came to the RootsTech youth activity night and had a surprise of their own: the Young Women and Young Men General Presidencies joined them.

Following the afternoon keynote from FamilySearch CEO Steve Rockwood on the events of the past decade and this year’s theme, “Story of You,” RootsTech event manager Jen Allen joined those onstage to announce the second RootsTech London.

About 10,000 people attended RootsTech London in October 2019—which surpassed all expectations, Allen said.

The 2020 conference will be held November 5–7 in the ExCeL London convention center.

“We hope you all join us, and registration is now open,” Allen told the excited audience, who broke into a roaring applause. 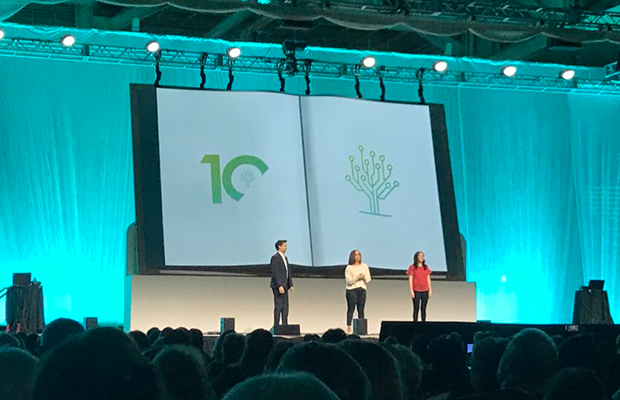 A Look Back at 10 Years of RootsTech

Since RootsTech’s humble beginnings in Salt Lake City in 2011, the number of attendees has grown by 10 times—from 3,000 to 30,000 in 2019—with growing interest from archivists, government officials, and commercial partners.

And what started out as an experiment with 40 classes and 59 exhibitors now boasts 300 classes and 180 vendors and exhibitors at this year’s conference. Those registered for RootsTech 2020 come from 49 states and 55 countries—the most global representation yet.

The impact of RootsTech far exceeds those who attend in Salt Lake City. In fact, more than 120,000 streamed sessions online during RootsTech 2019.

“We’re getting to that point where the RootsTech audience in Salt Lake is the studio audience,” said Rockwood in an interview prior to the event.

“It’s an ever-expanding audience, and we manifested that last year when we were able to actually take RootsTech to London.”

Reflecting on 10 years of RootsTech, Rockwood said: “We stand on the shoulders of those who preceded us. . . . We think that the future has never been brighter.”

The conference has continued to evolve each year with what is learned. RootsTech over the years has expanded to involve people of all skill levels and ages, including children, youth, young adults, and families. 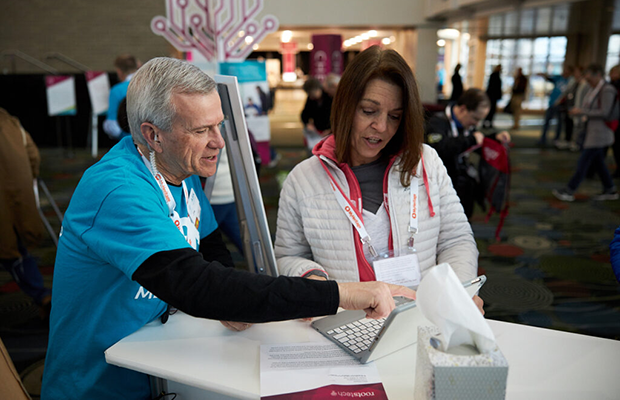 A volunteer helps a participant check in for RootsTech, held February 26–29 in the Salt Palace in Salt Lake City, Utah. Photo courtesy of RootsTech.

RootsTech is a metaphor for how the industry continues to grow, Rockwood said. “And we always ask ourselves at each RootsTech, ‘Who is not at the table yet? Who still needs to enjoy this?’”

Ellen Thompson-Jennings, of Edmonton, Alberta, Canada, remembers the 2011 RootsTech conference well. And she has come back for every RootsTech since—making her one of few who have attended all 10 years.

“It was just a small portion of the Salt Palace, and now it’s the entire Salt Palace,” she said of the event’s growth.

The first conference focused on technology and genealogy coming together. “This was all so new at the time,” she said. “I’d been doing genealogy for quite a while, and I started when I was a teenager. But it was just so amazing. I’d never been to anything like this.”

Now, 10 years later, she says her favorite part about RootsTech hasn’t changed: “It’s so fun to come here and meet people that like what you like . . . and know what you’re all about.”

While highlighting the theme “Story of You,” Rockwood shared how his family is preserving the memories of his mother, Grandma Marion, using Instagram. “Who are the Grandma Marions in your life?” he asked, then inviting the audience to capture stories in “normal, natural ways.” 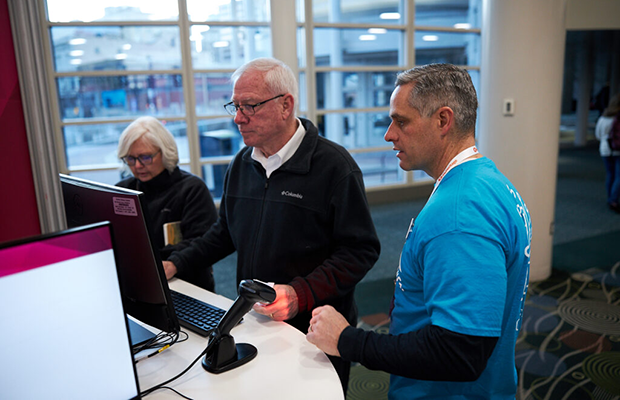 A volunteer helps a participant check in for RootsTech, held February 26–29 in the Salt Palace in Salt Lake City, Utah. Photo courtesy of RootsTech.

Following the keynote, more than 20,000 youth from along the Wasatch Front filled the Salt Palace to participate in interactive family history activities planned just for them.

Activities included a virtual reality homeland experience, an escape room, family history Twister, ancestor games, and 9-square, among others. The Young Men and Young Women General Presidencies participated with them. 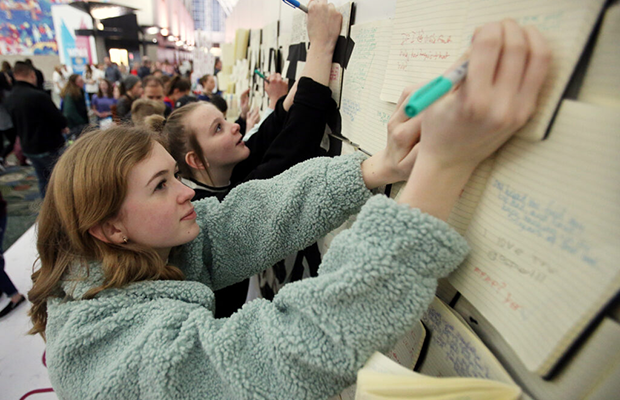 Emily Johnson and Rachael Nufer write their feelings about the Church and what it means to them on notebooks on a wall as they attend RootsTech youth night at the Salt Palace in Salt Lake City on Wednesday, February 26, 2020. Photo by Scott G Winterton, Deseret News.

“It is overwhelming to see the number of youth that love family history,” said Sister Becky Craven, Second Counselor in the Young Women General Presidency, during the event. “This used to be something just for their grandmas, and now they have pretty well taken over.”

She continued, “Just to stop and talk to the youth about who’s involved in family history, who’s going to the temple, who’s finding names—they are actively involved. They are part of the gathering.”

Elle Gregersen, Wynter Williams, and Grace Redington came to the RootsTech youth activities with their Young Women group and couldn’t wait to try out the escape room.

“My favorite part about family history is the cool stories,” Williams said.

Gregersen said, “I like learning about family and finding new relatives.”

Said Stephen W. Owen, Young Men General President: “It amazes me how many youth are here. . . . They are engaging with all of these events, and it’s been remarkable for me to be able to see this.” 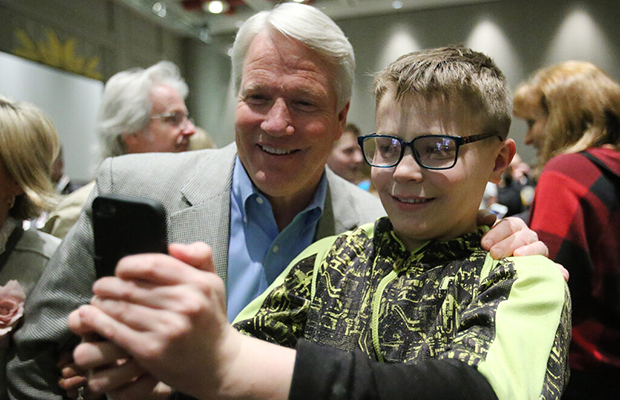 “There is great energy and excitement,” added Sister Michelle Craig, First Counselor in the Young Women General Presidency. “If they are not doing family history, hopefully this can hook them. They can see that it’s really fun.”

Carter Hansen, 12, had an ear-to-ear smile on his face when Brother Douglas D. Holmes greeted him during one of the activities. “Today is my birthday,” he said, and meeting the First Counselor in the Young Men General Presidency was the best birthday present. “It was amazing.”

Brother Holmes, too, felt the energy in the youth. “They are excited and energetic. They are just loving it. . . . I love what Elder Bednar said a long time ago, that youth will lead family history to a whole new level. We’re seeing another indication of it here tonight.”

Laura Zimmerman, 18, and her friend Marie Davidson, 18, said they spotted Sister Craig from across the room and were thrilled with the chance to talk with her. She had “that glow,” they said.

“We’re 18, and we have a ton of life decisions coming up,” Zimmerman said. “We were talking about how important it is to start with belief in Christ and work from there. It really helped me.”

Davidson added: “She was so relatable and so down to earth. I felt the Spirit from her.” 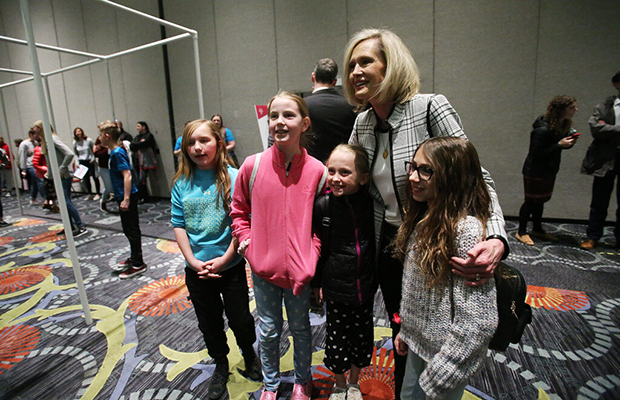 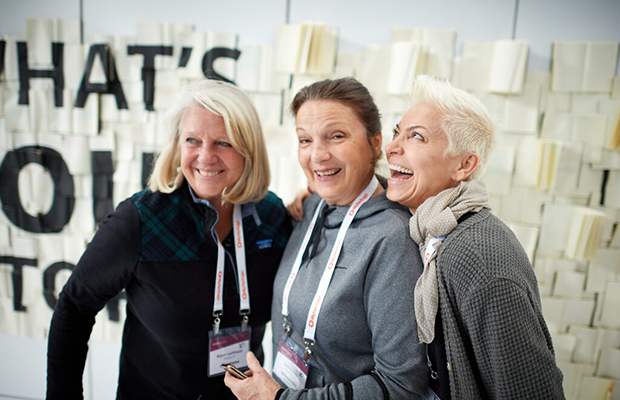 RootsTech attendees smile in front of the “What's Your Story?” board at RootsTech on Wednesday, February 26, 2020, at the Salt Palace in Salt Lake City. Photo courtesy of RootsTech. 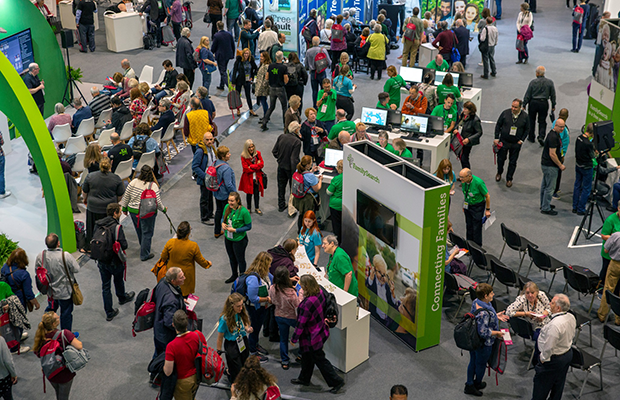