Tabernacle Choir, along with musical director Mack Wilberg, and organist Richard Elliott, sing “God Be with You” to audience in the Salt Lake Tabernacle after their special choir and broadcast for the RootsTech concert.

“We still need lots of help. We invite you to join the cause to help remember the millions of others who, like Irving Berlin, came to America.” —Elder Allen F. Packer of the Seventy

Irving Berlin, one of the most famous songwriters and American immigrants in history, was the focus of a special Mormon Tabernacle Choir concert and broadcast presented during the RootsTech 2013 Family History and Technology Conference.

Performed in the Salt Lake Tabernacle, the March 21 program came as the Church’s FamilySearch organization is marshaling tens of thousand of volunteers to index records of American immigrants in its U.S. Immigration and Naturalization Community Project. (Visit FamilySearch.org/immigration for more information.)

The program was video-recorded for delayed broadcast on Saturday, March 23, to 16 locations in seven countries as part of the RootsTech conference Internet streaming.

Elder Allen F. Packer of the Seventy, executive director of the Family History Department, gave remarks during the program in which he cited research showing that knowing more about family history is the single biggest predictor of a child’s emotional well-being.

“When in 1920, Irving Berlin wrote of America as a ‘land that I love,’ he reminded us that wherever we live today, the land where we live is the land that we come to love,” he said. “And when many of our ancestors have come from other places, those places become lands that we yearn to know about and love.”

Noting the success of last year’s FamilySearch-directed volunteer project to index the 1940 U.S. Census—completed in four months though expected to take a year—Elder Packer extended an invitation for listeners to become involved in the immigration indexing project.

“Seventy-one percent of all immigrants to the United States from 1892 to 1954 entered through the port of New York,” he said. “There are close to 100 million records from all the major ports during that time which need to be indexed. … So far, 120,000 volunteers have helped to index the records.

“But we still need lots of help. We invite you to join the cause to help remember the millions of others who, like Irving Berlin, came to America.”

It touched on the life of Mr. Berlin, a Jewish immigrant born in Belarus in 1888 as Israel Baelin, who came to the United States with his parents and five siblings in 1893 at age 5. He made his mark on New York’s Tin Pan Alley and later on Broadway beginning in 1911 with the hit song “Alexander’s Ragtime Band.”

“I used to ask my father, what was it like being poor,” daughter Mary Ellen said in the recorded segment. “He looked at me and would say, ‘What is being poor? It was what I knew.’”

She noted that the song lyrics say, “God Bless America, land that I love,” not “we love.”

“It was a very personal song to him, because … this country allowed him to become what he became, a great songwriter. So his gratitude to America was enormous, and it was his ‘home, sweet home,’” she said.

The segment also featured a video clip from the “Ed Sullivan Show” on television featuring Mr. Berlin on his 80th birthday singing “God Bless America.” That was followed by the choir’s live performance of the song.

At the RootsTech “Blogger’s Dinner” the night before the conference opened, FamilySearch global marketing director Shipley Munson shared some details about “God Bless America” that could not be included in the concert due to time constraints.

“It’s expensive to sing that song,” said Brother Munson, himself a member of the choir. “But the proceeds do not go to the heirs of Irving Berlin.”

The song was made public on Nov. 11, 1938, the 20th anniversary of the World War I armistice; since that date, all the proceeds from royalties have gone equally to the Boy Scouts of America and Girl Scouts of America, he said.

“About two weeks before the performance, Kate Smith called up Mr. Berlin—they did have phones then—and said. ‘I need a patriotic song.’ And he had one in his drawer; he’d had it for 20 years.”

Mr. Berlin’s family had escaped Czarist oppression, and he was very worried about events in Europe, Brother Munson related. “So he added a verse: ‘When the storm clouds gather far across the sea, Let us all be grateful for a land that’s free. Let us pledge allegiance to a land so fair. Let us raise our voices in a solemn prayer.’”

The prayer was “God bless America, land that I love.” 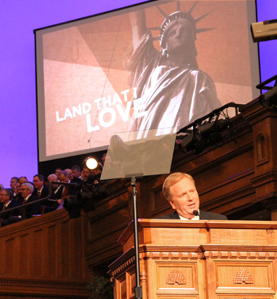