George Garmany, governor general of the Mayflower Society, Brenton Simons of American Ancestors, and Steve Rockwood of FamilySearch are joined by others from the Mayflower Society as they talk about their collaboration to digitize records of Mayflower descendants at the Salt Palace Convention Center in Salt Lake City on Friday, February 28, 2020. Photo by Scott G. Winterton, Deseret News.

“For all the bad things I’ve seen in my life, I still remain optimistic. Human nature and spirit prevails over adversity.” —David Hume Kennerly

November 2020 marks 400 years since the Mayflower landed in Plymouth in present-day Massachusetts. Many activities at RootsTech last week commemorated this historical event.

The three organizations are working on a coordinated project to digitize records of Mayflower descendants, said Ryan Woods, executive vice president and chief operating officer of American Ancestors and NEHGS, following the keynote.

“The story of the pilgrims is really the story of the founding of America,” he said. “To connect with them through your own personal story will be very powerful for this anniversary year and moving forward.”

Collin Smith, FamilySearch marketing manager for the Mayflower project, said, “This now makes it available for everyone to be able to more quickly see their connection to Mayflower ancestors.”

Regarding the status of the project, Woods said, “That work is going along very well. We launched 11 family trees this week. Later on this year, end of May or beginning of June, we plan to have the whole project online.”

FamilySearch, American Ancestors, and the Mayflower Society began digitizing GSMD member applications in September 2017. The application process includes documenting a line of descent from a Mayflower passenger with historical records.

Nearly 114,000 member applications—including 1.7 million images—have been captured. These digitized and indexed records of documented Mayflower lines will be published as individual records and family trees later this year on FamilySearch.org and AmericanAncestors.org. Access is free. 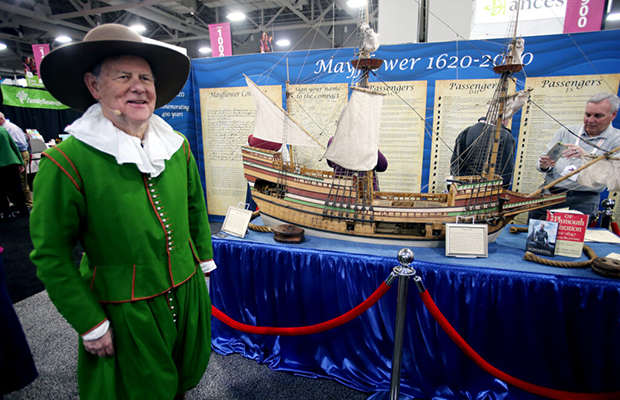 George Garmany, governor general of the Mayflower Society, stands next to a replica of the Mayflower after joining Steve Rockwood of FamilySearch and Brenton Simons of American Ancestors onstage talking about their collaboration to digitize records of Mayflower descendants at the Salt Palace Convention Center in Salt Lake City on Friday, February 28, 2020. Photo by Scott G. Winterton, Deseret News.

Today there are an estimated 35 million descendants worldwide that come from the 102 men, women, and children who landed in Plymouth in November 1620. Several of the men drafted and signed the Mayflower Compact—a document that provided a government in Plymouth with just and equal laws and set the stage for democracy in the United States.

William Bradford’s Bible, which sailed with the Mayflower in 1620, is on display in the expo hall at the Heirloom Show and Tell booth on Friday, courtesy of Brent and Charlene Ashworth. 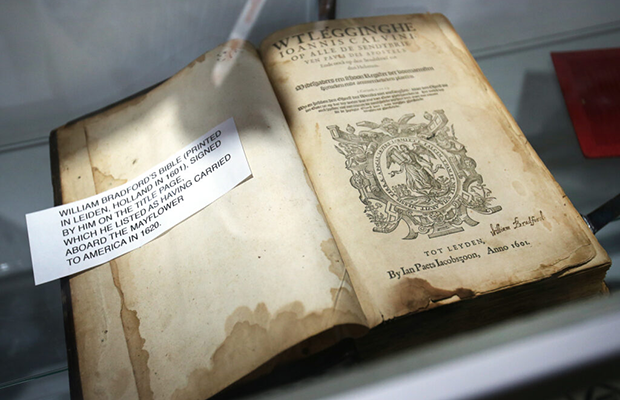 The John Calvin New Testament Bible in Old Dutch that sailed on the Mayflower is on display during RootsTech at the Salt Palace Convention Center in Salt Lake City on Friday, February 28, 2020. Photo by Scott G. Winterton, Deseret News.

The Bible comes from Brent Ashworth’s personal collection. “It’s a John Calvin New Testament,” explained Ashworth, a descendant of a passenger on the Mayflower. “So you’ll get three verses of scripture and then five pages of John Calvin [commentary]. It’s all in Old Dutch, so it’s very difficult to read now.”

The fact that a Bible made it on the voyage is “pretty amazing,” he said. “You didn’t have room for books. You had 102 people crammed aboard a ship that was . . . about 90 feet.”

RootsTech attendees can learn more about the 400th anniversary at the Mayflower booth in the expo hall. The booth features displays such as a 6-by-8-foot reproduction of the Mayflower, as well as activities and reenactors.

One way for someone to find out if they are a descendant of a Mayflower passenger is to go to relativefinder.org, sign in, and select the “Mayflower” group. Potential relationships will be displayed. This service is free.

David Hume Kennerly, a former chief White House photographer and Pulitzer Prize winner, showcased his portfolio during Friday’s keynote session. Kennerly is in his 55th year as a working photographer—an interest that began at age 10 when he took a photo of the family cat.

Kennerly’s work has been featured on more than 50 covers for major magazines. His assignments have taken him to more than 100 countries to document many of the biggest moments in world history. He has photographed every U.S. president since Richard Nixon. 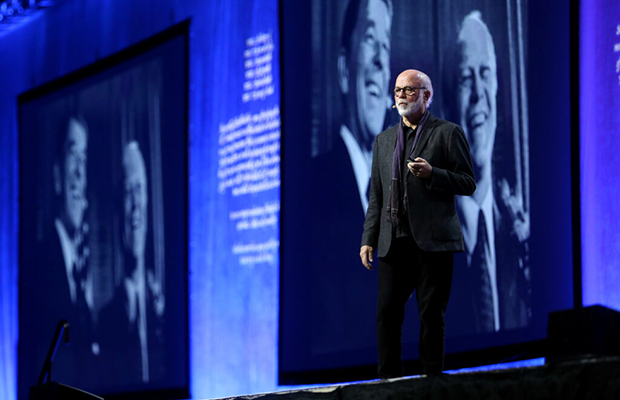 “For all the bad things I’ve seen in my life, I still remain optimistic,” he told the RootsTech audience. “Human nature and spirit prevails over adversity.”

At age 24, Kennerly traveled to Vietnam and spent two years covering the Vietnam War. “Every frame I took of Vietnam went straight to my heart,” he said. Kennerly won a Pulitzer Prize for his work in Vietnam.

Kennerly displayed a photo he took of Robert F. Kennedy two minutes before he was assassinated in June 1968. He also showed photos he documented of Watergate, Nixon’s resignation, and the presidency of Gerald R. Ford.

Explaining how photos give insight to people and events, Kennerly said, “For me, it’s all about the history.”

On Friday evening, stand-up comedian Ryan Hamilton performed on the main stage. An after-party for young adults was held at the Salt Palace, with activities such as interactive games, dancing, and escape rooms. 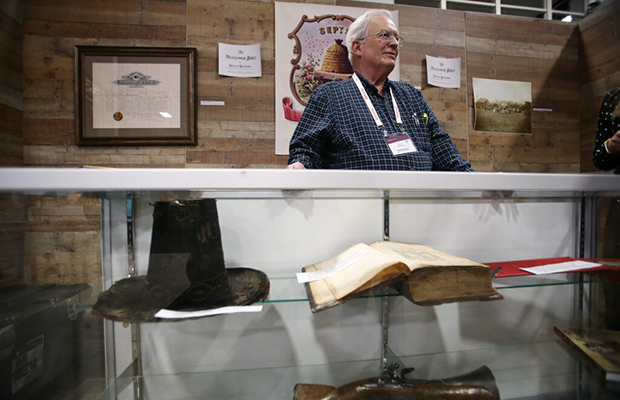 Collector Brent Ashworth talks with visitors about the John Calvin New Testament Bible in Old Dutch that sailed on the Mayflower and is on display during RootsTech at the Salt Palace Convention Center in Salt Lake City on Friday, February 28, 2020. Photo by Scott G. Winterton, Deseret News. 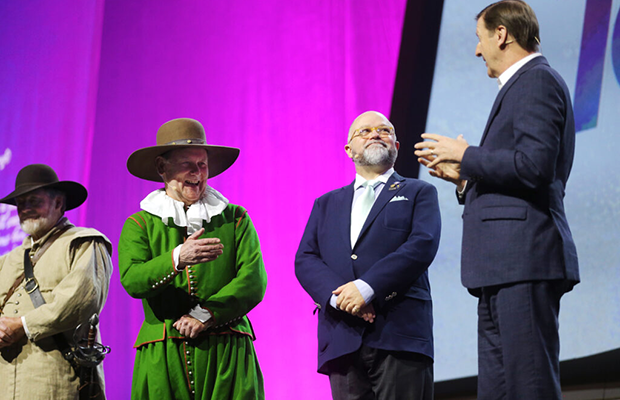