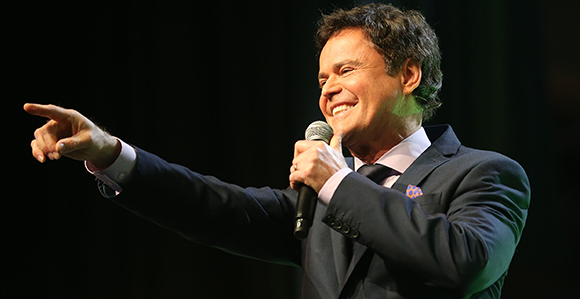 Donny Osmond gives his keynote speech at RootsTech at the Salt Palace in Salt Lake City on Saturday, February 14, 2015.

“Give your loved ones and your friends your time. Things don’t matter. It’s the love that lasts. Stories last. Your reputation lasts. Who you are lasts.” —Donny Osmond, entertainer

For the final general session at the 2015 RootsTech conference on Saturday, February 14, a New York Times bestselling author, A. J. Jacobs, spoke about his work organizing a global family reunion for June 6, 2015. He was followed by entertainer Donny Osmond, who sang several songs and shared stories about his own love for family history work.

Mr. Jacobs began the session by speaking about some of the projects he has been involved with during his career. He shared several slides and stories about his adventures researching and writing four New York Times bestselling novels, including an entire year in which he tried to follow every single rule in the Bible as literally as possible.

To prove his point, he showed the audience how he was personally related to President Barack Obama and actress Gwyneth Paltrow. As an example, he said that Donny Osmond is his aunt’s third cousin four times removed whose husband’s granddaughter’s husband is his great-nephew.

Answering the question of why anyone should care whether or not they are related, Mr. Jacobs shared four points why a world family tree is important. The first reason is scientific. “There are scientists studying these family trees to see how traits and diseases are passed down,” he said.

The second reason was the global family brings history alive. “When I told my kids that they were related to Albert Einstein, their eyes lit up,” said Mr. Jacobs. “Now he wasn’t just some old dead white guy with funny hair. He’s Uncle Albert.”

The third reason why a global family tree is important is to show the interconnectedness of humankind. And the final reason is the hope that the global family tree will help develop a kinder world. “Once it sinks in that we are all one big family, I hope that will make us realize we need to be kinder to each other,” said Mr. Jacobs. “The global human family is bad news for bigots. Whatever ethnic group they happen to hate, guess what? They are related to them.”

To further his desire to bring together the global human family, he announced that he is holding a global family reunion on June 6, 2015, in New York City. There will also be an extension in Salt Lake City at the Family History Library and online. “I’m thankful that I discovered genealogy because it has changed my life,” he said.

The final speaker at the Saturday morning session was entertainer Donny Osmond, who flew in from Las Vegas that morning to present at RootsTech. He was greeted by a standing ovation from the crowd who cheered as he entered.

After showing several video clips and sharing stories about his life and the lives of his family, Brother Osmond explained the importance of documenting a person’s life. “Has your life been documented? If not, why not? The legacy you leave behind is just as significant as anyone else, including me,” he said.

Sharing his music talent with the enthusiastic audience, Donny sang several songs, including “Puppy Love,” “Moon River,” and “The Gift of Love.” In the annals of pop music history, Donald Clark Osmond will probably always be known as the guy who sang that song about a puppy, he said.

“When you explore your family history, you end up learning more about yourself,” said Brother Osmond. He shared stories about his pioneer ancestor Elizabeth Williams and the life of his dad, George Virl Osmond. These ancestors taught him the importance of being strong and overcoming adversity. At times when he needs motivation, Brother Osmond’s thoughts often turn to his father. “He had a harder life than anyone can imagine in his teens. He prevailed over so much adversity, so he’s the source of my strength.”

When the opportunity came to be a part of the television show Dancing with the Stars, Brother Osmond reflected on his ancestors and their tough and tenacious attributes. At the time he was performing in Las Vegas, and adding more to his already demanding schedule was very difficult. Reflecting on what his ancestors had overcome in the past helped him gather the strength to meet the challenges of the present. He went on to win the entire competition for the ninth season of Dancing with the Stars.

Brother Osmond also shared a personal family history experience he had while traveling for six years performing in the musical Joseph and the Amazing Technicolor Dreamcoat. During his spare time he would work on his family history and developed a love for it because it was like figuring out a puzzle. About hitting roadblocks doing family history, he said, “I feel the presence of my ancestors all the time helping me. Miracles happen all the time.”

To finish his comments at the conference, Brother Osmond said that if audience members remembered only one thing it should be, “Give your loved ones and your friends your time. Things don’t matter. It’s the love that lasts. Stories last. Your reputation lasts. Who you are lasts.”

When asked why he decided to present at RootsTech he told the Church News, “I love computer technology and I’ve loved to see how FamilySearch has advanced over the years. … I love how everyone is contributing and coming together to work in the same database.”