“You see what athletes balance outside the sport, and it does take an infinite amount of focus and dedication and sacrifice. But I think it makes them better runners. It strengthens them.” —Diljeet Taylor, BYU women’s cross-country coach

There are a number of ways a squad of college athletes might celebrate winning a national championship.

So how did Brigham Young University’s men’s cross-country team spend their evening after claiming the 2019 NCAA Championship on Saturday, November 23, in Terre Haute, Indiana?

They got cleaned up, pulled on dress shirts and ties, and headed to nearby Indianapolis to participate in a stake devotional.

“I thought it was amazing,” said returned missionary Conner Mantz, who finished third in the 10-kilometer race. “I’m so grateful to be at a university where we could do that. . . . Part of our celebration was being together and sharing our belief in God and our testimonies.”

The victory marked a first-ever national men’s cross-country title for the Cougars. Meanwhile, their counterparts on the BYU women’s cross-country team finished second Saturday at the NCAA Championships and also joined the men’s team at the devotional.

Both teams competed in cold, wet conditions, but each proved resilient to both the weather and their elite competition.

“I was super pleased with the way the guys rose up and battled through the elements,” said men’s coach Ed Eyestone. “They have believed in themselves all season.”

“I could not have asked for more heart from these women in that race,” she said.

Both Cougar teams could aptly be called overachievers, outperforming the pre-race expectations of the cross-country pundits.

The men’s team graduated four All-Americans from last year’s squad, so it might have been tempting for Cougar coaches to classify 2019 as a rebuilding year.

“But one of our themes all year has been ‘naivete,’” said Eyestone, laughing. “[We were] dumb enough to believe that all things were possible. All season long we just did our thing and didn’t worry about the Northern Arizonas and the Colorados of the world. We just focused on what we could do individually to make ourselves better.”

Tactically, he added, the Cougar coaches schemed a game plan for race day—and the athletes “executed that very well.”

In the minutes and hours following the race, Eyestone received about 140 congratulatory texts. Many were from former athletes who had helped hone BYU’s long-established reputation as a destination for elite distance runners.

“This was a win for Team BYU—and for all the great athletes that preceded this team.”

For many BYU runners, interrupting college competition to serve a full-time mission has been a life-changing experience defined by personal growth and spiritual development. But getting back into Division 1-athlete condition following a two-year mission assignment is typically slow, grueling work.

“It requires a lot of patience,” said Heslington, a senior who served a mission in Guatemala. “You have to come back and realize you’re not going to be one of the top guys right away.”

Most returned missionaries, he added, expect to take a full year getting back into competitive shape.

Eyestone said Saturday’s post-race devotional with the Indianapolis Indiana North Stake only enriched the memories of an already unforgettable day.

“It was a sweet opportunity for us to be together and have an attitude of gratitude.”

The coach is no stranger to college national championships. On Saturday, Eyestone became the first person in NCAA history to win an individual national title (1984) and then coach a team to an NCAA championship.

Both, he said, were “sweet experiences.”

“But doing it as a coach of a team is a little sweeter. You are able to share that joy with that many more people and see the happiness that comes to the members of the team by accomplishing this big, awesome, hairy goal that you have all set.”

Coach Taylor believes her most primary duty is not, say, formulating race tactics or training programs.

“The most important part of coaching is getting your athletes to believe in themselves,” she said. “My athletes were very confident in their abilities, and they had faith.”

Taylor said the BYU women’s squad also proved its mettle during the wet and grueling national championship race. “They are such tough women. Our motto over the last 20 days leading up to the race was ‘I’m tougher than you.’”

Given the team’s trademark grit, none of the Cougars were unnerved by the nasty race-day conditions.

“The cold never bothered us; we were saying, ‘Let it snow, let it snow,’” said Taylor. “Six of our seven [race participants] are from Utah, so they’ve run in tough conditions.” 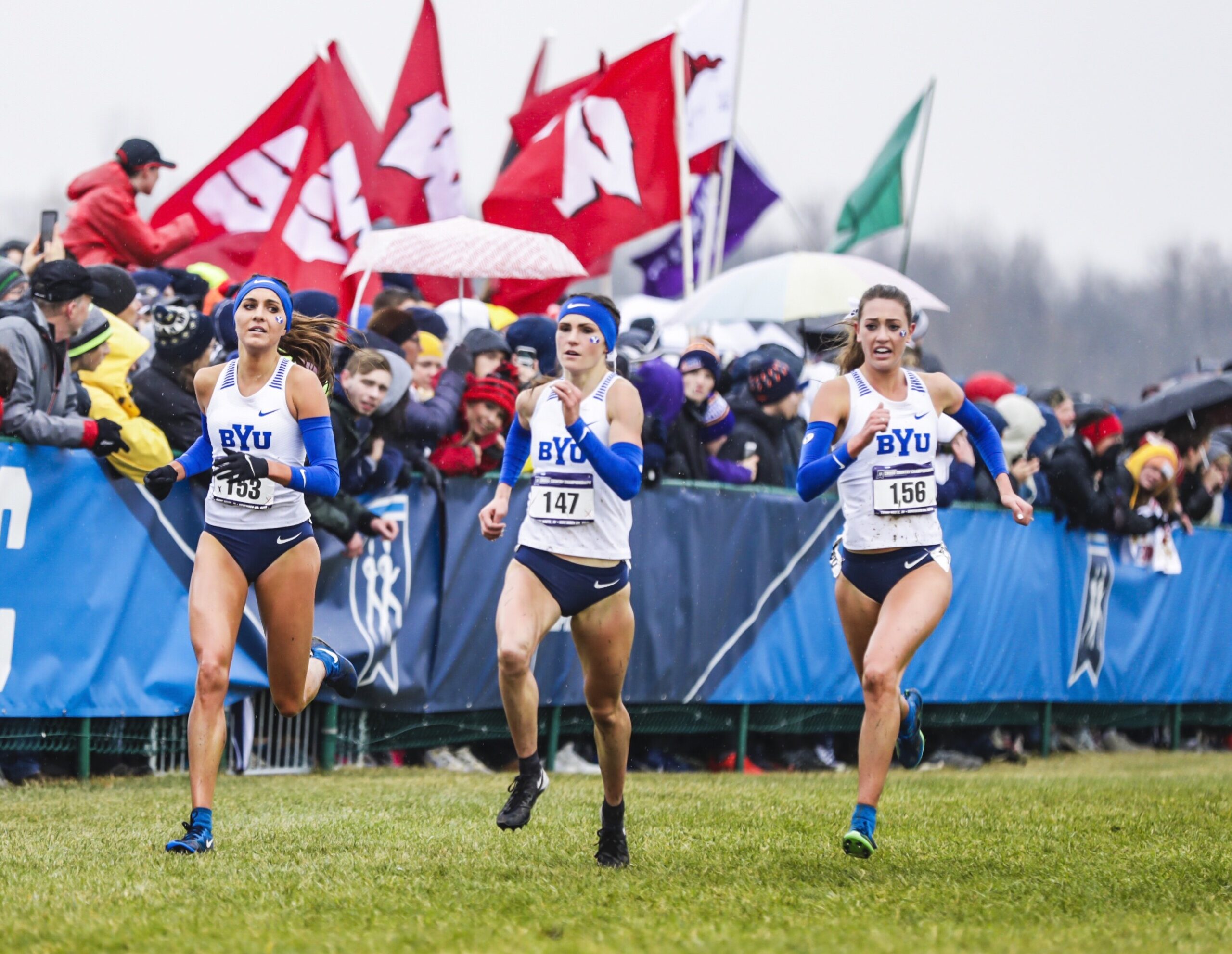 The coach knew long before the season that the 2019 roster was made of focused athletes who were also really, really fast. “I had seen the potential and talent that we possessed. I knew we were going to bring something special back to Provo,” Taylor said.

Senior runner Courtney Wayment called it an honor to be a part of an individually diverse program defined by respect and commitment.

“I am really proud of our team,” she said. “It is bittersweet that we didn’t win, because that was our goal. But I know that every single girl that raced on Saturday gave all that they had.”

Taylor also appreciates how her athletes keep a laser focus on their athletic goals even while maintaining a balance in their lives away from the sport. Two of the team’s All-Americans—Wayment and Birk-Jarvis—are married. And returned missionary Birk-Jarvis is a mom to a toddler son.

“It’s what makes BYU special,” said Taylor. “You see what athletes balance outside the sport, and it does take an infinite amount of focus and dedication and sacrifice. But I think it makes them better runners. It strengthens them.” 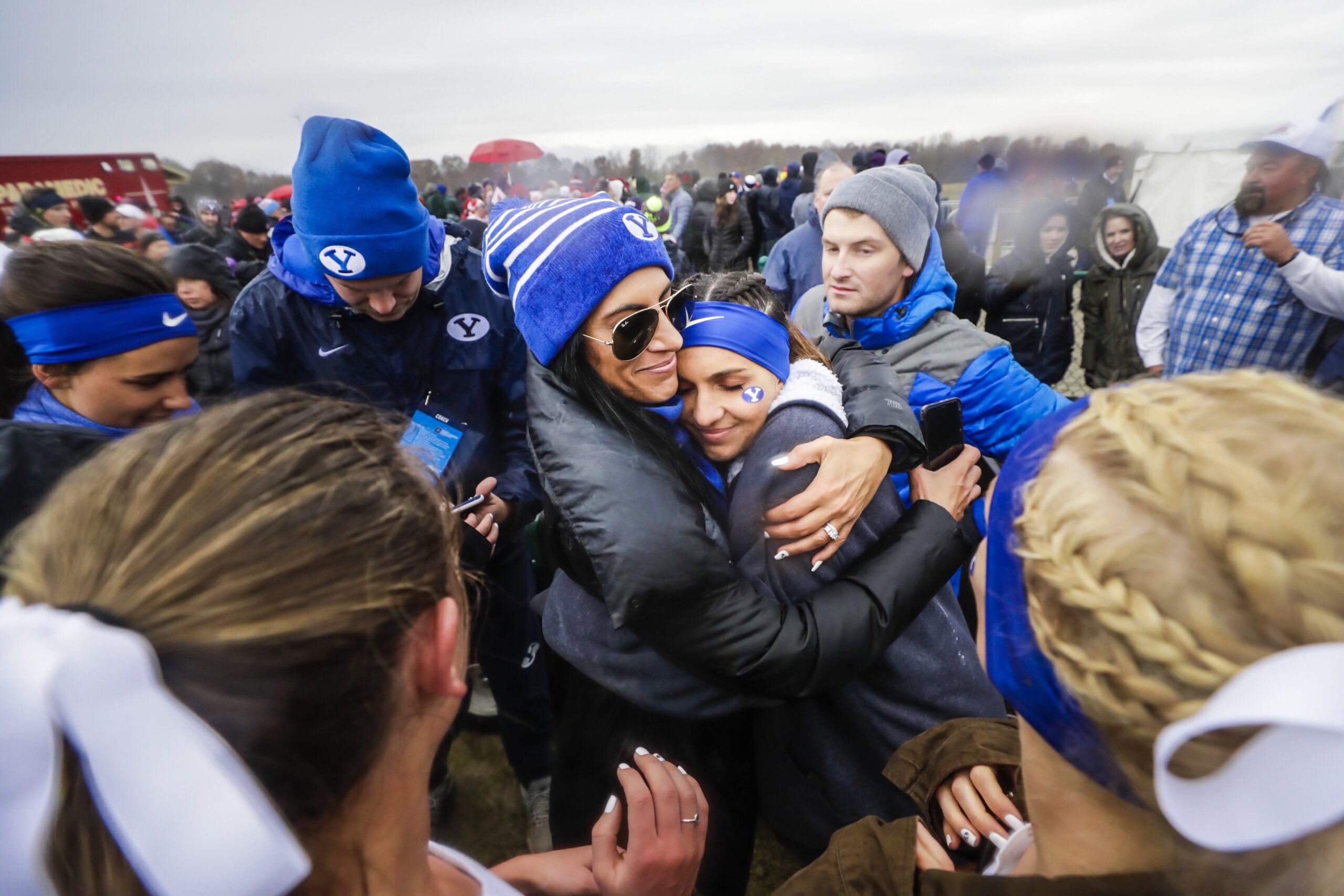