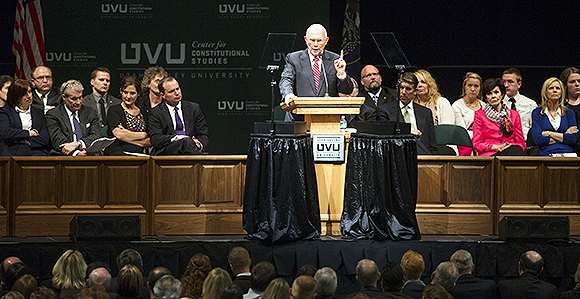 Elder Dallin H. Oaks speaks Wednesday, April 16, 2014, at a constitutional symposium on religion at the UCCU Center at Utah Valley University in Orem.

“To achieve our common goals we must have mutual respect for others whose beliefs, values, and behaviors differ from our own. This does not expect that we will deny or abandon our differences but that we will learn to live with others who do not share them.” —Elder Dallin H. Oaks of the Quorum of the Twelve

There is hope for the future of religious liberty and freedom of speech despite an “alarming trajectory,” Elder Dallin H. Oaks of the Quorum of the Twelve Apostles said April 16 in a speech at Utah Valley University.

Elder Oaks delivered the keynote address at UVU's Constitutional Symposium for Religious Freedom, saying part of his hope is grounded in the “long-term prospect of furthering the interests of all contending parties by mutual understanding and accommodation.”

Prior to the lecture, which drew about 4,000 people to the UCCU Center on UVU's campus, Elder Oaks became an honorary fellow of the school's Center for Constitutional Studies. He joined two-time Pulitzer Prize-winning author and historian David McCullough, the center's inaugural honorary fellow. The address marked Elder Oaks's first formal and extensive legal lecture since 1985, a year after he left the Utah Supreme Court for full-time service as an Apostle.

“I believe we live in a time of diminishing freedom of speech,” Elder Oaks said, but he listed numerous reasons why “my final conclusion is a message of hope.”

Elder Oaks maintained that freedom of speech and the free exercise of religion doubly protect religious liberty, but he said there are reasons to be concerned about the vitality of each of these constitutional guarantees.

“I fear that free speech is diminishing as a result of the chilling effect of mostly invisible restraints, even censorship,” he said. As for religious liberty, he added, “I am one of the many religious persons who have decried the alarming trajectory of theories, court decisions, and executive actions that are diminishing the free exercise of religion.”

He cited a number of examples, including one “very personal to me”—the boycotts, firings, and intimidation of people who backed Proposition 8, which defined marriage as between a man and a woman in California. Elder Oaks called the recent resignation of Mozilla's new CEO over a $1,000 donation the man made to Proposition 8 six years ago “another unfortunate example of bullying and intimidation that too often seeks to censor speech in the public square.”

Elder Oaks expressed concern about and criticized two legal techniques he said have been used in efforts to push religion out of the public square. The first is the idea of “public reason,” which he called an “incredible claim that laws cannot be based on religious morality” and that “religion is said to be a private rather than a public matter.”

“Religion is being marginalized to the point of censorship or condemnation,” he said. “Religious voices, values, and motivations are being crowded out of the public square. Accusations of bigotry or animus leveled at those who promote an adverse position have a chilling effect on speech and public debate on many important issues,” he said. “Both freedom of speech and freedom of religion are jeopardized when their advocates are disparaged as being motivated by hatred.”

Elder Oaks asserted that free speech is demeaned if it is rejected in a public setting, like a court case, because of the assumed motives of the speaker or if the speech is disqualified based on stereotypes affixed to the speaker. He referred to the 1857 Dred Scott decision in which the U.S. Supreme Court ruled that blacks had no right of access to federal courts. “I see a parallel between denying judicial access to a person on racial grounds and excluding public consideration of a person's opinions on religious grounds.”

He added, “I submit that religious leaders and religiously motivated persons should have the same privileges of speech and participation as any other persons or leaders and that churches should stand on at least as strong a footing as any other corporation when they enter the public square to participate in public policy debates.”

He provided this counsel for people of religious faith today: “To achieve our common goals we must have mutual respect for others whose beliefs, values, and behaviors differ from our own. This does not expect that we will deny or abandon our differences but that we will learn to live with others who do not share them.”

Despite his concerns, Elder Oaks said he is optimistic in the long run for multiple reasons, chiefly because of the guarantees of the First Amendment, the Religious Freedom Restoration Act, and the growing concern of Americans.

“One reason for optimism is that the threats to religious speech and religious freedom have become so notorious that our citizens are beginning to become concerned,” he said. He hailed new efforts to bring leaders of different faiths together for the common cause of defending religious liberty. Some efforts “are crossing denominational lines that were insurmountable a few years ago.” He also praised the advent and success of religious freedom advocacy organizations and academic centers on religion and the law at major universities.