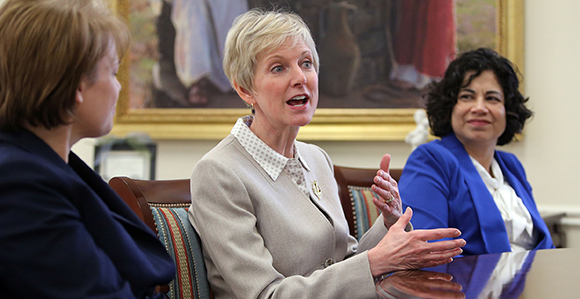 “Because every one of us is individual, we are all unique. Those differences are really some of the things that strengthen us. And if we can accept those with each other, then we truly know that everyone belongs.” —Sister Jean B. Bingham, Relief Society General President

Sister Ruth Cuellar Alvarez Falabella followed a young boy up the switchbacks of a Colombian mountain.

Walking was the only way to reach her destination, and it took hours.

With her sister as her visiting teaching companion, Sister Falabella asked one question: “Are we almost there?”

The boy who was sent down the mountain to meet and then guide the sisters said, “Yes, yes, we are almost there.”

A quarter of an hour later, the women asked the question again: “Are we getting close?”

When she finally reached her destination, Sister Falabella, the wife of Elder Enrique R. Falabella, a General Authority Seventy, and her sister sat down in the humble home.

The family expressed gratitude for their journey. Few people ever took the time to come up to the mountain to visit them, and it meant a great deal. Relating this experience, Sister Falabella referred to a phrase by the poet Antonio Machado, saying: “Caminante, no hay camino, se hace camino al andar.”

Translated it means “There is no road already there; you make it as you walk.”

“You may not know what the road is,” said Sister Eubank. “There may not be a pattern for you to follow for the person that you’re trying to minister to. You just make it as you walk. … There is no perfect way; it just reveals itself as you go.”

The Relief Society General Presidency hopes Latter-day Saint women across the globe will focus on ministering this year.

Speaking of the new council-style meetings which Relief Societies held on the first Sunday of every month, Sister Bingham explained that they are meant to create a safe space where sisters should feel comfortable sharing their doubts and questions as well as their love and acceptance of one another.

And once that safe space is created by sisters sharing the things they have in common as well as the things that make them different, Sister Bingham said, “then you can feel like there is a place for you, because every one of us is individual, we are all unique. Those differences are really some of the things that strengthen us. And if we can accept those with each other, then we truly know that everyone belongs.”

Sister Aburto related that at times, everyone can feel alone, or that there is no one who understands them and the things they are experiencing.

“But if we just start talking to each other, we realize that we have a lot in common, and then we also know that the Savior knows how we feel because He suffered everything,” Sister Aburto said. “By helping each other, we can get to know Him better and be His disciples.”

Sharing ideas she learned recently in her ward Relief Society, Sister Eubank said she realized that one of the main things holding sisters back from ministering to one another as true disciples of Christ is a fear of judgment from one another.

Relating her experiences and realizations to the biblical story of the adulteress who was brought before Christ, Sister Eubank explained, “They drag her before Jesus and they throw her down, and everybody has stones in their hands and they’re just waiting.” Recognizing that everyone sins and that some people’s sins are simply more visible than others, Sister Eubank said, “We are all before the Lord asking for His grace, asking for Him to help us.

“We’ve got to just put down our rocks and help lift up people and say, ‘I won’t judge you either,’ and extend the grace of God,” Sister Eubank said. “It’s something I’m trying to do in my own life, to be more like the Savior and just say, ‘I’ll lift you up and give you hope. I’m your friend’ and go from there. That’s I guess the ultimate kind of ministering.”

Women often feel a need to network with one another, and Relief Society is meant to be a place for that, said Sister Bingham.

“Relief Society can fill that need if we are willing to let go of criticism, judgment, and comparison. We need to replace comparison and criticism with compassion and charity,” Sister Bingham said. “Our focus is to love as the Savior does.”

But in order to let go of natural tendencies to judge one another and to put down stones, Sister Aburto said she thinks everyone needs to become comfortable with stepping out of their comfort zones.

“We need to get out of our comfort zone in order to grow,” Sister Aburto said. “We need to stretch ourselves a little bit and have faith that this is something that the Lord is asking of us and that He is going to give us the strength that we need.” 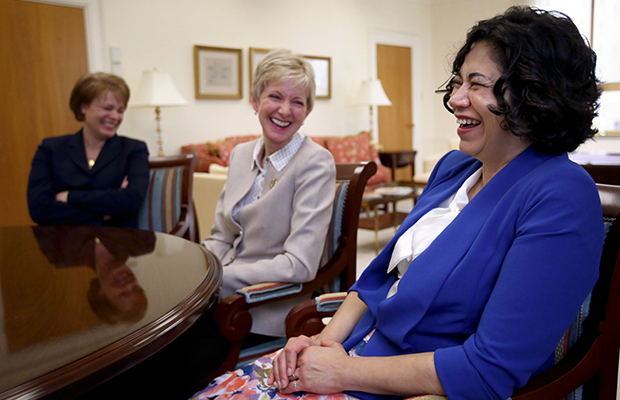 Expressing their love and concern particularly for younger sisters who are new to Relief Society either in young single adult wards or by transitioning from Young Women, the sisters of the presidency explained that ministering or council discussions won’t be the same for every sister or ward.

“We need the variety, the differences, the capacities and uniqueness of each other,” Sister Bingham said. “If we were all cookie cutter, we wouldn’t get very much done.”

And speaking of the variety of experiences necessary to help break the cookie-cutter mold, Sister Eubank expressed a need for young adult sisters to participate more in their wards, opening new dialogues and opportunities to learn from one another and grow together. 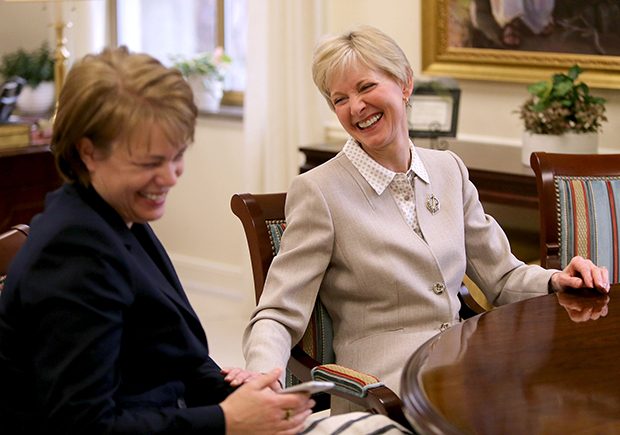 “The Church right now needs younger women,” Sister Eubank said. “We need the influence of young women because of the way the world is changing. Relief Society needs the influence in its councils of what young women have to offer, and we don’t have enough of our young women participating. We really need them. We need the energy and innovations they bring with them.”

The sisters of the Presidency expressed a desire and openness for change in the ways sisters minister to each other within wards and communities. The point, they said, is to be true disciples of Christ by ministering to one another’s needs and being there to lift each other up, and there is no one right way to do that.

“We have in our minds certain ideas about what ministering means,” Sister Eubank said. “But they’re sort of static, and one of the most important things I think we can do is to blow open those categories. Anything that a person needs that you respond to—that’s ministering. Blow open the categories and do lots of different kinds of things rather than just the traditional things.” 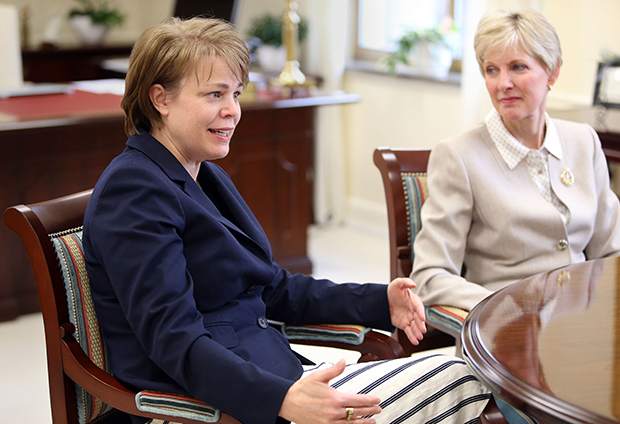 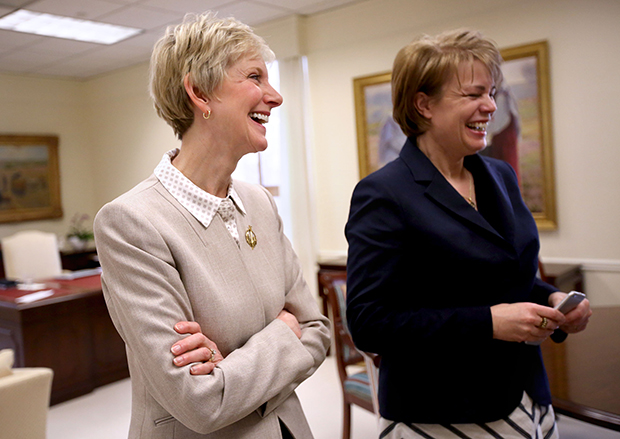