Record Spiritual Insights to Receive More Revelation in Your Life 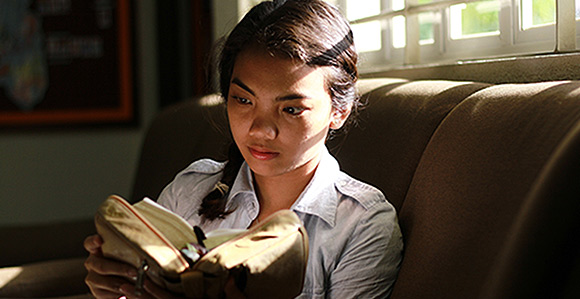 A young woman reads the scriptures in front of a window. When we record spiritual impressions, we show the Lord we are ready for more revelation.

“As we record and reverence and savor each spiritual impression given, it opens the door for us to also receive multiple spiritual promptings daily.” —Tad R. Callister, Sunday School General President

One of the ways we can enhance our personal revelation is to write down and record spiritual insights and impressions when they come. When we do so, we show the Lord we value His counsel and are ready for more.

Before I left to preside over the Canada Toronto Mission, Elder Richard G. Scott of the Quorum of the Twelve Apostles invited me to take the time to record every spiritual impression I received. I have tried to follow that counsel. One night, while on my mission, I kept getting in and out of bed. Finally, my wife said: “Why do you keep popping in and out of bed?” I replied, “Because I had several impressions and felt the need to write them down.” On occasions prior to my mission, I had had impressions while in bed and simply thought, “I will write them down in the morning when it is more convenient.” But you know what happens when you do that—you often forget the exact impression or lose the power of the message.

The Lord taught the foregoing principle to Joseph Smith and Sidney Rigdon as they received the marvelous vision on the three kingdoms of glory. Three times He commanded them to write “while [they] were yet in the Spirit” (see D&C 76:28, 80, 113). Similarly, when Alma received revelation, “he wrote [the words] down that he might have them” (Mosiah 26:33).

Recording spiritual promptings results in at least the following blessings:

First, it preserves the integrity of the message.

It allows us to preserve the knowledge exactly as given. An old Chinese proverb states, “The palest ink is better than the best memory.” Memories and feelings fade with time. King Benjamin realized this, for when speaking to his sons he explained that without the various scriptural records available to them, they would have “suffered in ignorance … for it were not possible that our father, Lehi, could have remembered all these things, to have taught them to his children, except it were for the help of these plates” (Mosiah 1:3–4).

Second, it preserves the feelings of the moment.

Recording impressions preserves not only the message given, but it can also preserve the feelings of the moment. A ward mission leader once told me that he invited all new converts on the day of their baptism to record their feelings that night. Then he said, if at a later date doubts or questions arise, they can reread what they have recorded and it will help restore or bring back the spiritual feelings of that sacred day in their life.

You may feel that some impressions you receive are insignificant at first, but recording them is like planting a seed—with some nurturing and pondering, the seed can grow into a mighty spiritual redwood.

Impressions are easier to share when they have been written down. In addition, they are more accurate. Because Lehi had access to recorded revelations, both his own and those of other prophets, he was able to “teach them to his children, that thereby they could teach them to their children, and so fulfilling the commandments of God, even down to this present time” (Mosiah 1:4).

If we show the Lord that we truly treasure and savor revelation from Him, we are likely to receive more revelation. Elder Richard G. Scott taught, “Knowledge carefully recorded … enhances the likelihood of your receiving further light” (“Acquiring Spiritual Knowledge,” Ensign, Nov. 1993, 86).

On occasion, during some training, I have invited a mother of a young teenage boy to come forward. I would say to her, “Suppose for a moment you are giving some counsel to your teenage son. At one point, he says, ‘Mom, could you stop for a moment—that is really good counsel!’ and he begins to write it down. Then he says, ‘Could you now give me some more counsel?’” Well, once the speechless mother has recovered from the shock of such a thought, I ask her how she would feel if such an experience really did occur. Responses would come like, “I don’t think you are in the world of reality,” or “I would be stunned, but so pleased—I would want to give him more counsel because I realize he is now mature enough to receive it.” And then the lesson. In many ways, we are all spiritual teenagers. When the Lord gives us counsel, what is our response? Perhaps some of us roll our eyes and say, “Not that again,” or turn up the music or ignore the impression or go back to sleep. Or, on the other hand, do we express appreciation for the impression, and however inconvenient the moment may be, whether in or out of bed, write it down? How do you think our Father in Heaven feels when we do so? Has He not promised, “For unto him that receiveth I will give more” (2 Nephi 28:30)?

I often wondered how Nephi and his brother Lehi “and many of their brethren” had “many revelations daily” (Helaman 11:23). At first that seemed impossible to me, but I no longer feel that way. As we record and reverence and savor each spiritual impression given, it opens the door for us to also receive multiple spiritual promptings daily.

Mark Twain is alleged to have said, “When I was 14, I was amazed at how ignorant my father was. When I became 21, however, I was startled at how much he had learned in 7 years.” To some degree, I can relate to that story. When I followed Elder Scott’s advice and began to write down and record each divine insight and impression, I was pleasantly surprised at how much better the speakers and teachers in church had suddenly become. As we record spiritual insights and impressions, we will both heighten the enjoyment we receive at church and facilitate our receipt of additional revelation.