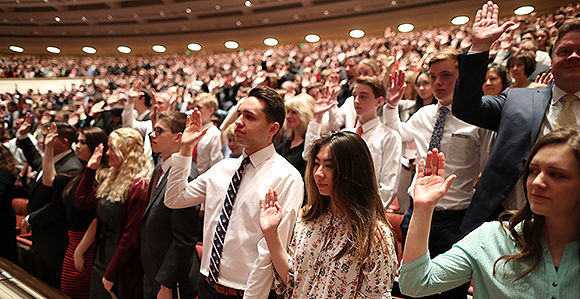 Members of the Church raise their hands to sustain the new First Presidency of the Church, President Russell M. Nelson and his counselors, President Dallin H. Oaks and President Henry B. Eyring during a solemn assembly during the Saturday morning session of general conference on March 31, 2018.

“Sustaining is not just passively raising a hand; it is making a promise that we are going to do our part of the work.” —Steven C. Harper, historian

Joseph stood and asked those participating if they “desired the organization of The Church of Jesus Christ of Latter-day Saints.”

Exercising the principle of common consent, the newly baptized members raised their hands in a unanimous vote. Next they consented to accept Joseph Smith and the other elders of the Church as their “spiritual teachers.”

“In one sense, sustaining the leaders was a major reason for having the first meeting of the Church on April 6, 1830,” said Steven C. Harper, a historian in the Church History Department.

From that day on, early Saints were invited to “consent to the calling” of Church leaders and to sustain them in that calling, said Harper.

It is a pattern that has continued for 188 years, he said, noting that members will again raise their hands in consent of their leaders during the 188th Annual General Conference of the Church next week.

“Sustaining is not just passively raising a hand; it is making a promise that we are going to do our part of the work,” said Harper.

The practice dates back to the 1829 revelation in which the Lord told Joseph to organize the Church but to wait until the time he could gather those who had been baptized together to “decide by vote if they were willing to accept us as spiritual teachers or not” (Joseph Smith Manuscript History, volume A1).

Harper said from the organization of the Church in 1830 to the present day, two things happen when members of the Church give their “common consent” to a proposal. 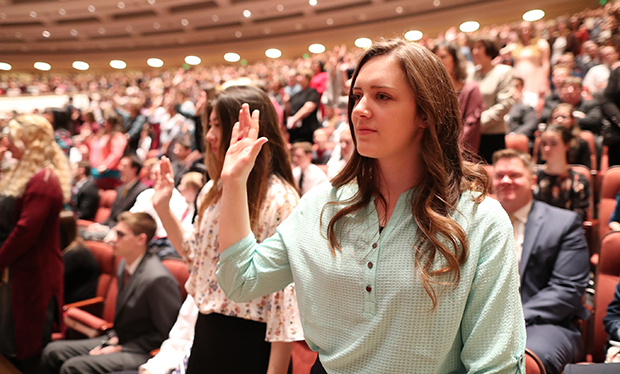 Women raise their hands to sustain the new First Presidency of the Church, President Russell M. Nelson and his counselors, President Dallin H. Oaks and President Henry B. Eyring during a solemn assembly during the Saturday morning session of general conference on March 31, 2018.

First, he said, “we consent to the proposal.” Second, “we manifest our commitment to sustain whatever is proposed.”

Although the word “sustain” was not used in this context during the time of Joseph Smith, Church members today refer to the process as “sustaining.”

Early Latter-day Saints may have used the word sustain on April 6, 1830, “but if so we don’t know it,” said Harper.

Instead, the Lord asked the members—including women, which was not a common practice of the day—to “sanction” the proceedings.

The 1828 edition of Webster’s dictionary defines the word sustain as “to bear; to uphold; to support; to hold; to keep from falling; to keep from sinking in despondence; to support in any condition by aid; to endure without failing or yielding.”

This is the same sentiment the Lord gave to the Saints about how they should treat Joseph Smith and other Church leaders, said Harper.

“This becomes standard practice from literally the first day of the Church until today,” Harper said. 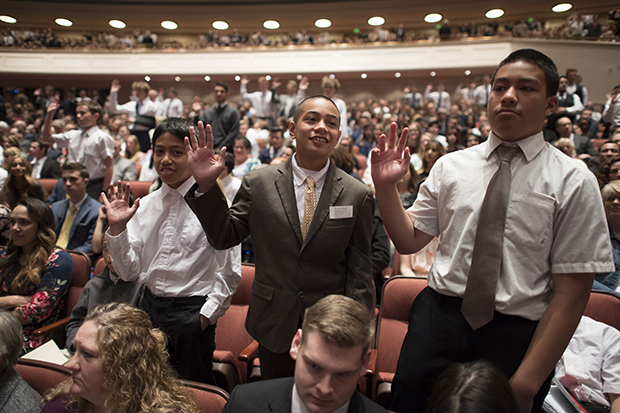 Aaronic Priesthood holders raise their hands to sustain the new First Presidency of the Church, President Russell M. Nelson and his counselors, President Dallin H. Oaks and President Henry B. Eyring during a solemn assembly during the Saturday morning session of general conference on March 31, 2018.

“At some later time we developed the formulaic language, ‘it is proposed that we sustain,’” said Harper. But there are hundreds of documented examples of sustainings in the early years of the Church.

Several weeks after Joseph Smith’s death in June of 1844, Brigham Young proposed that the Quorum of the Twelve Apostles would lead the Church.

“That meeting ends with several questions being posed to the Saints,” said Harper.

Today Latter-day Saints are engaged in the same actions as then, Harper said. 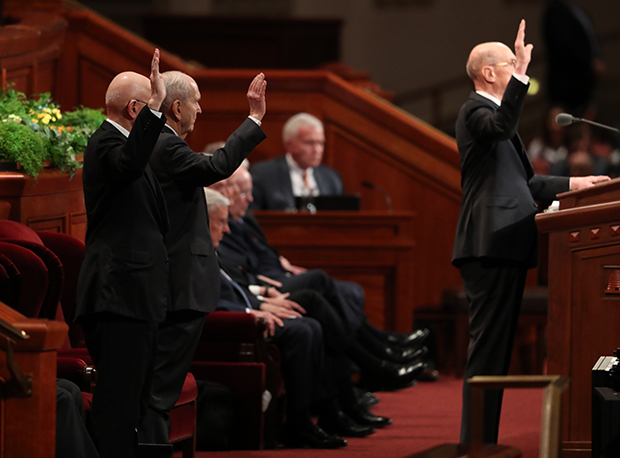 “We are doing two things,” he explained. “We are consenting to what is being proposed. We are also saying, ‘I am going to sustain what is proposed. I am going to use my blood, sweat, tears, time, etc., to uphold whatever is being sustained—a person, a proposition, whatever it might be.’”

President Joseph F. Smith, then Second Counselor in the First Presidency, spoke of this concept in 1898: “It is an important duty resting upon the Saints who … sustain the authorities of the Church, to do so not only by the lifting of the hand, the mere form, but in deed and in truth.”

In 1919, Elder George Albert Smith—who became President of the Church in 1945—again spoke of sustaining in the context adopted in the formative years of the Church. “The obligation that we make when we raise our hands … is a most sacred one. It does not mean that we will go quietly on our way and be willing that the prophet of the Lord shall direct this work, but it means … that we will stand behind him; we will pray for him; we will defend his good name, and we will strive to carry out his instructions as the Lord shall direct,” he said.

Harper called sustaining “one of the most beautiful parts of the Restoration.” In essence, when members sustain Church leaders and actions, they are keeping covenants, he said.

Revelations found in Doctrine and Covenants 21:4–5 offer insight into what it meant to sustain Joseph Smith on the day the Church was organized and what it means to sustain a prophet today, Harper said.

“For his word ye shall receive, as if from mine own mouth, in all patience and faith.” 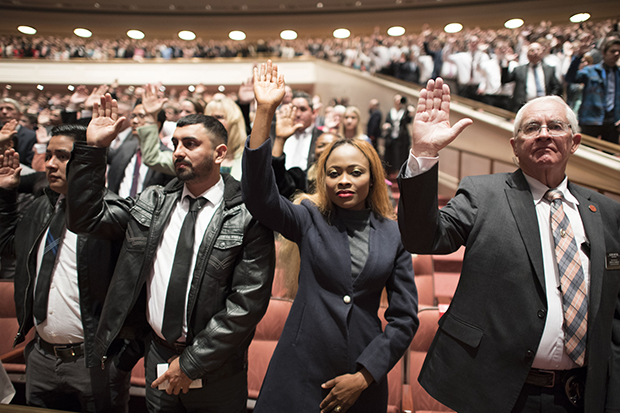 Members raise their hands to sustain the new First Presidency of the Church, President Russell M. Nelson and his counselors, President Dallin H. Oaks and President Henry B. Eyring during a solemn assembly during the Saturday morning session of general conference on March 31, 2018.