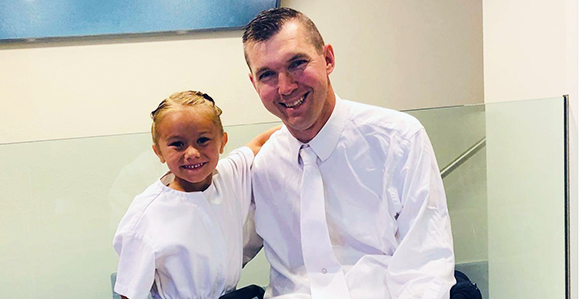 Jarom Hlebasko poses with his daughter Miree at her baptism. Photo courtesy of Leslie Hlebasko.

“It’s one of those things you don’t take for granted. The tenderness for a dad to baptize his children is hard to describe. The privilege is mine to baptize my children.” —Jarom Hlebasko

On June 1 in Cedar City, Jarom Hlebasko entered a baptismal font and faced his eight-year-old daughter, Miree, ready to baptize her a member of The Church of Jesus Christ of Latter-day Saints. At that moment, feelings of gratitude and fulfillment washed over him—gratitude because there was a time in his life when he didn’t think performing such a baptism would be possible, and fulfillment because once again he was realizing a blessing pronounced years before.

In the winter of 2000, 18-year-old Hlebasko was enjoying time with his friends in the new-fallen snow. Just about to leave, he decided to have one last jump into the soft, deep powder. Rather than his landing softly in the snow, his head hit a mound of hard ground hidden below the snow’s surface, and he immediately recognized the magnitude of his accident.

“I remember laying under the snow and being completely awake but not being able to move anything,” Hlebasko recalled. “All I could do was lay there and call for help in what wasn’t much more than a whisper—and just pray that my friends would come find me.”

His friends soon came, and one gave him a priesthood blessing before his parents and a helicopter arrived. It was soon determined the severity of his injuries had resulted in paralysis from the chest down.

Hlebasko—then a varsity high school athlete competing in soccer, cross-country, track, and basketball—remembers laboring in coming to terms with his physical limitations. That, he said, was a natural struggle.

The spiritual struggle, however, was something he didn’t expect.

“The accident happened on a Friday, and I was turning in my mission papers the following Monday,” Hlebasko said. “I spent the next several months in intensive care, and I wasn’t able to serve a mission for my church. This was hard for me because in my patriarchal blessing, it says that I would baptize and confirm many into the Church. I always thought it would be related to missionary work, and with me not being able to serve, I wondered how I would baptize in my condition as a quadriplegic.”

A patriarchal blessing, according to ChurchofJesusChrist.org, is available to every worthy, baptized member; it provides a declaration of a person’s lineage in the house of Israel and contains inspired direction and personal counsel from the Lord.

Years went by, and Hlebasko married his high school sweetheart, Leslie, and the two added three daughters to their family. Hlebasko earned his degree in engineering technology, with an associate degree in design technology, eventually earning a job as the team lead at an engineering firm.

Hlebasko acknowledged the many blessings he had received despite his accident and expressed gratitude for each. Even so, the opportunity to participate in the act of baptism was not yet fulfilled.

“I remember when I was 16 years old and received the . . . priesthood, giving me the ability to baptize,” Hlebasko said. “My sister would soon be baptized, and I asked my dad if he would allow me to do it. His response was that I would have the opportunity to baptize my own children as their father, and it was his privilege as a father to baptize his children. I respected that answer and looked forward to the chance to baptize my children.”

When that time came, however, Hlebasko said he wasn’t sure it would be possible.

“When my oldest daughter, Jaden, was preparing to be baptized, I figured I would have somebody else do the baptism because I didn’t think it was possible for me to baptize her,” he said. “Being the strong-willed personality she is, Jaden didn’t want anyone else but me to do it.”

Thinking back on the blessing he received and the words of his father all those years ago, Hlebasko decided he would do all he could to be able to be the one to baptize his children.

“I did some research and found that it was possible, but I would need a lot of assistance,” he said. “I have some mobility in my arms, so I’d be able to raise my hand when pronouncing the blessing. Jaden and I practiced a lot too. I had her get under my armpit while I said the blessing, and she would let herself in and out of the water. My dad would need to wheel me in with the help of what is kind of like a dolly.”

Hlebasko joked about water and weightlessness doing strange things to his body, and when he was sitting in the font, his legs floated to the surface. He said everyone got a good laugh out of it, including himself. Even so, after the baptism was complete, he said he was grateful. And he felt the same way when he was able to baptize his daughter Miree a few years later.

“It has been a true blessing to be able to do this,” Hlebasko said. “It’s one of those things you don't take for granted. The tenderness for a dad to baptize his children is hard to describe. The privilege is mine to baptize my children.

“I encourage those with challenges that hinder them from being able to baptize their children to try everything in their power to do this ordinance. To be a witness to the glisten in your child’s eyes after getting out of the water is a special, tender moment. If you are able, take the opportunity.” 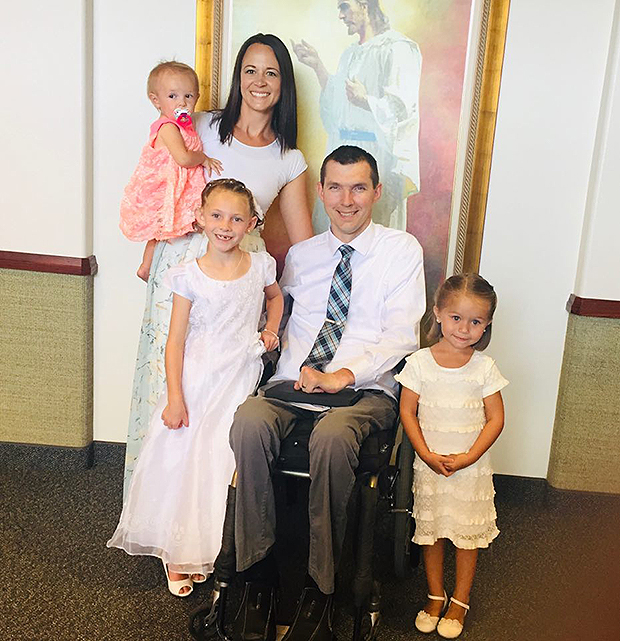 Jarom and Leslie Hlebasko pose with their three daughters at the baptism of their oldest daughter, Jaden, in 2014. Photo courtesy of Leslie Hlebasko.