Provo Museum Preserves Printing History of the Book of Mormon 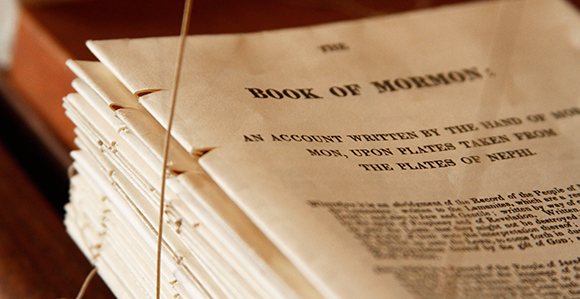 Three blocks east from the historic Provo City Center Temple, an unexpected adventure invites visitors to discover the inspired wonders in printing the first edition of the Book of Mormon.

The Crandall Historical Printing Museum at 275 E. Center Street houses hands-on exhibits that give patrons a visual understanding of the technical and logistical challenges early Saints encountered in printing the first copies of the scriptures. Volunteer docents guide guests through rooms filled with presswork history that hints at a trail of convenient coincidences that mark the miracle of how the first printed copies of the Book of Mormon were made possible.

The largest room in the museum displays a replica of the tall wooden Gutenberg press, which produced the first printed copies of the Bible in the 1400s. Another room showcases how Benjamin Franklin innovated printing techniques further and created his self-named press later used in printing the founding documents of America—the Constitution and the Declaration of Independence.

“Then we come in here and tell the story of the Book of Mormon. We demonstrate each step,” said Jim Watkins, who serves as senior docent for the museum. “We just don’t talk about it—we demonstrate. We show how it’s printed step-by-step and then how it’s changed into a book.”

All printing presses exhibited in the Crandall museum, including the wooden Gutenberg press, stand as fully operational replicas complete with movable metal type, handcrafted paper, and thick black ink ready for use.

The first edition of the Book of Mormon carries a curious aesthetic that may catch modern readers by surprise.

“There are no verses. Verses weren’t put in until later,” Brother Watkins said, describing the printed page. “It reads just like a novel—just straight through. There are chapters, but you don’t have any chapter headings and no footnotes.”

High-resolution photocopies of Joseph Smith’s original dictation show museum guests that no punctuation marks were transcribed by Oliver Cowdery. Instead, a typesetter named John H. Gilbert punctuated the manuscript during the printing process as he loaded each letter and space individually into the press bed.

Demonstrating these stories is a proud feature the museum offers, and it aids in framing an appreciation for the scale of Joseph Smith’s initial order for 5,000 copies of the Book of Mormon, Brother Watkins said.

The senior docent continued, explaining that an order of 500 books was considerable in 1829, even for major publishing firms. New York-based printer E. B. Grandin only agreed to the unprecedented printing contract when Martin Harris offered his own farm as collateral.

Other inspired events led to the Saints’ ability to secure a printing firm capable of the scaled production required for the massive order.

Nine years prior, the Peter Smith Printing Press had just been invented, but it weighed nearly one ton, and ground shipping by horse and wagon was far too costly from New York City manufacturers to Palmyra, New York. With the completion of the Erie Canal in 1825, however, the press could then be floated on the Hudson River and down the Erie Canal, which passed right by Palmyra, where Grandin’s printing shop was located.

The 5,000-book order was filled within seven months with the printing team working 11 hours each day, six days each week, and averaging nearly two sheet imprints per minute on the press.

“The older presses couldn’t have done that kind of job in that amount of time,” Brother Watkins said.

During the Gutenberg era and through the ages, printers used handmade paper with a hard, slick finish. The oil-based ink used in printing at the time made better imprints when the paper was slightly moistened, which added the timely step of drying before a sheet could be flipped over to print on the reverse side.

Printing paper used in the first editions of the Book of Mormon was a softer, machine-made paper that did not need moistening. E. B. Grandin could then print on dry paper.

“If they’d have had to moisten it, it would have taken four or five times as long,” Brother Watkins said.

Scriptural scholars estimate the Gutenberg press, better known as the common press, could print approximately 200 sheets per hour, equating to about 3.33 sheets per minute—about half as slow as the 1820 Peter Smith press used in the production of the Book of Mormon.

Museum visitors witness the physical requirements operating a 19th-century hand printing press demands. Printers hand-casted metal type and then carefully placed each letter, space, and individual punctuation mark in line for printing. Next, two large leather ink balls were used to dab the type, a single sheet of paper was placed over the top of the type, and it was all rolled into position under the press to get imprinted. Each side of an imprint contained 16 pages of the 592-page Book of Mormon first edition.

Up to 500 guests typically visit the museum each month and view first-edition replicas of the Book of Mormon, the 1836 edition of the Doctrine and Covenants, the Book of Commandments, and Emma Smith’s book of sacred hymns.

A printer and graphic designer by trade, Louis Crandall founded the museum in 1998 and was involved in operations until his death in September last year at age 87. Museum director Louis Crandall Jr., 55, now manages the historical printing museum along with his four sisters.

Brother Crandall said his father had always been a visual learner, and he taught the printing of the scriptures keeping that in mind, particularly in crafting the museum experience for his guests.

“He wanted children and adults—everyone—to feel the type and see the ink and even print a page if they wanted to—of the Bible or the Constitution or the Book of Mormon and let them feel it,” Brother Crandall said of his father. “Let them feel a piece of type and what it took and how painstaking it was to make that book in such a quick amount of time from translating to printing.”

Much of President Thomas S. Monson’s professional career centered on publishing and printing. President Monson visited the Crandall museum in 2009 for his induction ceremony into the Utah Printer’s Hall of Fame, along with six other inductees.

In the early 1970s, then-Elder Monson chaired the committee charged with adding footnotes, chapter headings, and cross-references to the Bible and Triple Combination as they are seen today. The modern-day cross-referenced scriptures the Church presently uses were available beginning in August 1981.

“If you go to the Church’s museum (in Salt Lake City), you don’t get to touch the original press or you don’t get to feel the type. That’s kind of usual for a museum. Our museum is different—ours is more of an experience,” Brother Crandall said. “It’s not behind ropes; you get to touch and feel and sometimes even print pages from the Bible or the Book of Mormon.

“And this makes our museum that much more exciting, especially for the scriptures,” he added. 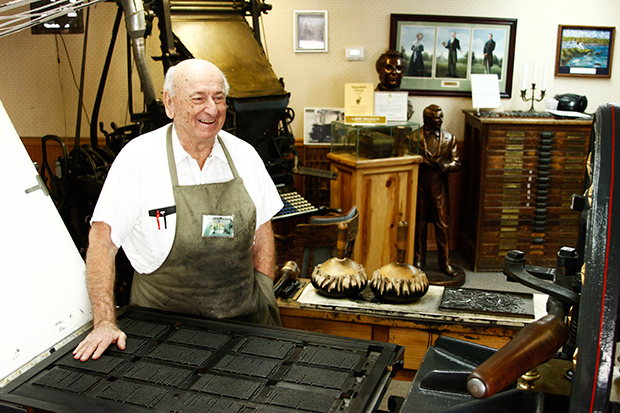 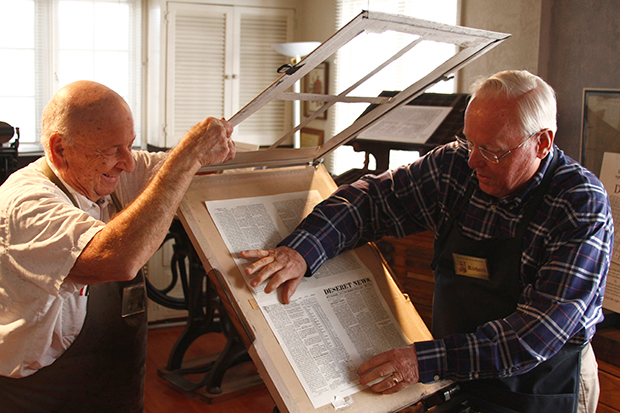 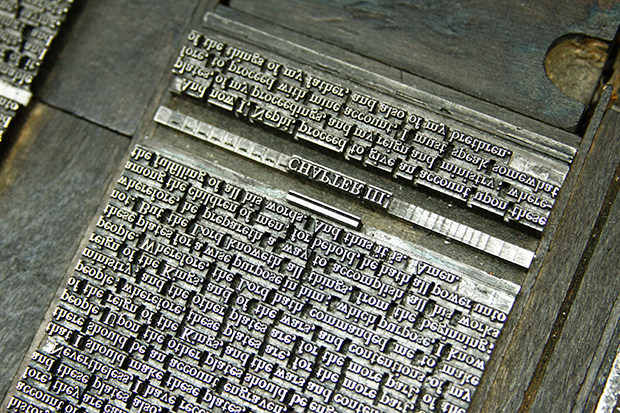 Early Saints used the Peter Smith Press, or the Acorn Press, to produce the first printed copies of the Book of Mormon beginning in 1829. Seen here are the final words to 1 Nephi chapter 9 and the start of chapter 10. Photo by Casey Adams, Deseret News. 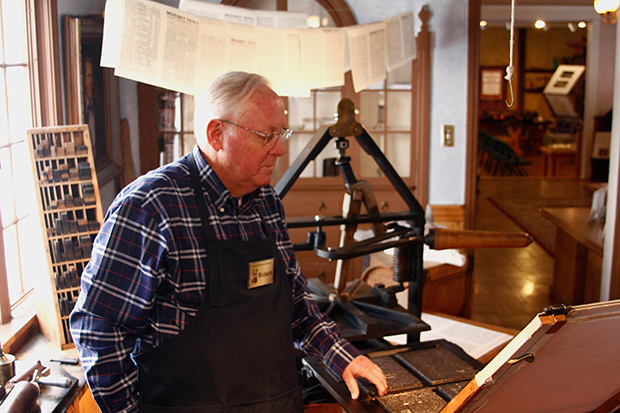 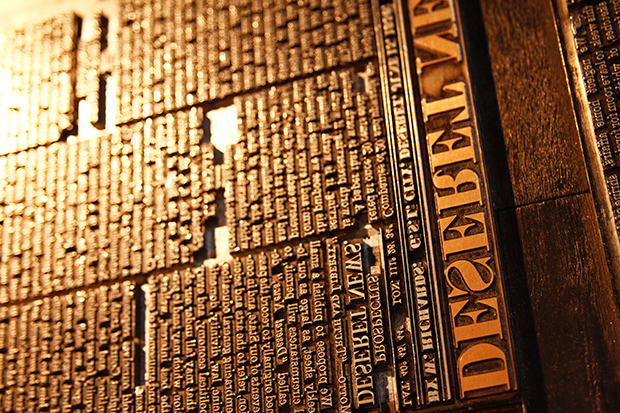 A working replica of the Ramage Press is on display at the Crandall Historical Printing Museum in Provo. The press printed the first editions of the Deseret News beginning in 1850, and it used cast type and thick black ink to imprint text onto sheets of paper. Photo by Casey Adams, Deseret News. 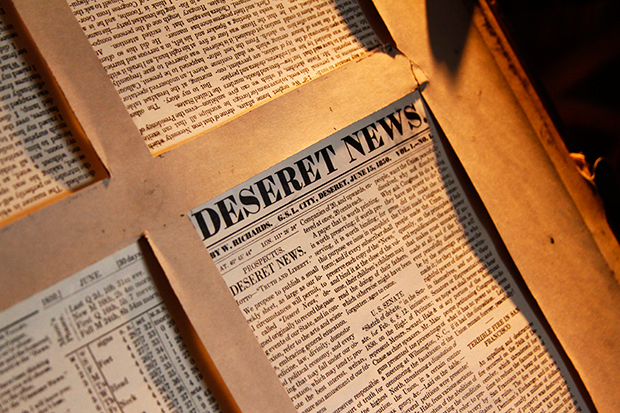 A working replica of the Ramage Press is on display at the Crandall Historical Printing Museum. The press printed the first editions of the Deseret News beginning in 1850. Photo by Casey Adams, Deseret News.