Progress on Restoration of Church History Site in Pennsylvania

The peaceful Susquehanna River is where Joseph Smith and Oliver Cowdery baptized each other after receiving the Aaronic Priesthood. The event is depicted in a film being produced for a new visitors’ center.

“The site is sacred ground for Latter-day Saints. Our hope is that by restoring the historic buildings and making the area more accessible, visitors of all faiths will be able to enjoy the beauty of the site and learn more about the restoration of the priesthood and the translation of the Book of Mormon.” —Elder Marlin K. Jensen, former Church Historian and Recorder

It may look and sound like a construction zone, but the northeast Pennsylvania site of significant events in the history of the Church is becoming more accessible to tourists, who visit it in greater numbers every year.

The site in Oakland Township, once known as Harmony, near the present-day town of Susquehanna, Pennsylvania, is where the Aaronic Priesthood was restored in May 1829; the Melchizedek Priesthood was restored soon after in the same area. Joseph Smith and Oliver Cowdery baptized each other at a bend in the river beyond the Smith home.

Since 1960, a bronze sculpture depicting the two receiving the Aaronic Priesthood at the hands of John the Baptist has marked the site of that event. Now the area around it is being expanded and restored to include a chapel and visitors’ center as well as replicas of the homes of the Hale and Smith families.

The 90-acre area is undergoing new construction and renovation that will more easily accommodate visitors. Work includes relocating the road—State Highway 171—and installing an underpass beneath the highway to make it safer for pedestrians to access the commemorative monument, homes, and river from the visitors’ center, as well as the cemetery where Joseph and Emma Smith’s infant son Alvin is buried. The graves of Emma’s parents, Isaac and Elizabeth Hale, are also in the cemetery.

The project, the latest major Restoration site to be developed by the Church, was announced in April 2011. When it is completed and the site opens in fall 2015, visitors will be able to first watch a 22-minute narrative film depicting the historic events in Harmony. A small portion was shot on location, including the scene that portrays Joseph and Oliver baptizing each other. Most scenes were shot at the LDS Motion Picture Studio in Provo, Utah, where the film is currently in production.

Church youth groups from the Scranton, Pennsylvania, area volunteered to help remove stones from the excavations of the Smith and Hale homes last spring and helped install 1,500 feet of stringer fence with stone under it this summer.

A temporary signboard next to the construction manager’s trailer explains a little of the history. Joseph and Emma Hale Smith moved to Harmony in 1827 to escape persecution and lived with Emma’s parents until they purchased a nearby home on 13 acres. The film under production is in the narrative voice of Oliver Cowdery, a schoolteacher who came to meet Joseph and soon became his scribe.

While in the process of translating the Book of Mormon, the two went into a quiet grove to pray for guidance on the topic of baptism. On May 15, 1829, they were visited by the resurrected John the Baptist, who ordained them to the Aaronic Priesthood. He then commanded Joseph and Oliver to baptize each other in the river, some distance beyond, now separated from the home site by a railroad track. On an unrecorded date a little later, the two were visited by resurrected beings Peter, James, and John and received the Melchizedek Priesthood.

The majority of the Book of Mormon was translated in Harmony as Joseph Smith grew into his role as prophet, seer, and revelator, noted Reid Neilson, Church History Department managing director, in a recent news conference. Harmony was also the site of 15 revelations received by Joseph Smith that were later included in the Doctrine and Covenants.

Joseph and Emma had moved from Harmony by August 1830; the home they had lived in burned down in 1919.

The Pennsylvania site—a joint project by the Church’s Missionary and Church History Departments—is one of about two dozen historic sites around the world that the Church maintains. All are free and open to the public.

Standing near the river on a serene autumn day, one senses the importance of the place. LDS Newsroom reported Elder Marlin K. Jensen, then Church Historian and Recorder, as saying at the April 2011 announcement, “The site is sacred ground for Latter-day Saints. Our hope is that by restoring the historic buildings and making the area more accessible, visitors of all faiths will be able to enjoy the beauty of the site and learn more about the restoration of the priesthood and the translation of the Book of Mormon.” 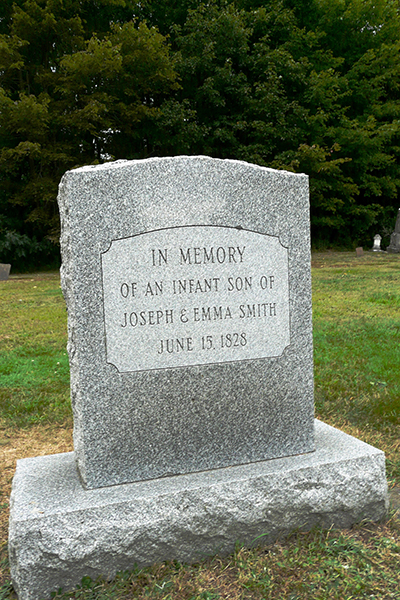 The grave of Joseph and Emma Smith’s infant son Alvin lies in the nearby cemetery, along with graves of Emma’s parents. Photo by Laurie Williams Sowby.