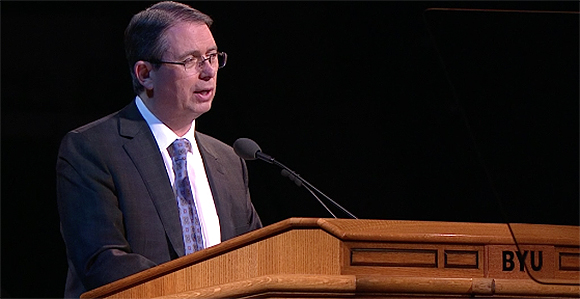 “Only by uniting our voices and actions to assist victims and promote respect for others can we help to end sexual violence.” —Benjamin M. Ogles, BYU professor

To those who are victims of sexual assault, “there is hope.”

That was the message of Benjamin M. Ogles, professor at Brigham Young University, during a campus devotional on January 30.

Addressing the perpetrators, victims, and loved ones of those who have experienced sexual assault, Ogles explained the importance of agency, accountability, and the Atonement of Jesus Christ as it relates to the sensitive topic.

“Only by uniting our voices and actions to assist victims and promote respect for others can we help to end sexual violence,” he said.

Recognizing that in 2017, many stories were published regarding sexual harassment and assault, Ogles spoke of the increasing exposure of the issue. While headlines included the names of celebrities, politicians, and corporate executives among accused perpetrators, many people joined in social media campaigns—such as the #MeToo campaign—to have a voice in the increasing, and sometimes controversial, issue.

Ogles, who serves on the Advisory Council on Campus Response to Sexual Assault at BYU and is the dean of the College of Family, Home, and Social Sciences, explained how he has seen firsthand while at BYU the weightiness of the issue of sexual assault.

“This council focused on examining the university’s response to incidents of sexual misconduct,” Ogles said. “Our charge was to determine how to better handle the reporting process for victims of sexual assault.”

To gather information, a website was set up where more than 3,100 people submitted feedback.

“Though it took many hours, we read every response, some of which described personal, heartbreaking experiences,” he said. “Our work resulted in 23 recommendations, all of which have been or are being implemented at BYU, including the development of an amnesty policy, changing an organizational structure, creating a victim advocate position, and conducting a survey of BYU students regarding sexual assault.”

A second committee Ogles was on surveyed every full-time student during the winter semester of 2017. “Again, we learned of some BYU students’ painful and distressing experiences with sexual assault,” he said.

As a stake president, psychologist, and professor—a role in which he has reviewed dozens of theses and dissertations for graduate students researching sexual assault—Ogles said he has had many encounters with the issue of sexual assault.

“Even with this background, service on these committees made me all the more keenly aware of the suffering that is associated with sexual assault,” he said. “What added to my sorrow was the fact that here at BYU, even though we have high standards for our conduct, there are individuals who perpetrate and experience unwanted sexual contact. This was discouraging.”

“I felt anxious and at times overwhelmed as I prepared this address,” he said. “I did not volunteer to participate on the advisory council and certainly never imagined that I would deliver a devotional focused on the gospel doctrines associated with sexual assault. Yet my experiences led me to this moment where I feel an urgency to address this delicate topic.”

Sharing important doctrinal foundations—agency, accountability, the Atonement of Jesus Christ, and creative powers that come with sexual intimacy—Ogles spoke of how these doctrines are essential to learning and growth and to becoming like God.

These foundations are essential, and with them come both positive and negative consequences. While some consequences come from a person using his or her agency, other consequences are a result of someone else’s agency.

“Unfortunately, people around us, even those closest to us, like our family, dating partners, and friends, sometimes use their agency to act in ways that injure us,” he said. “While our Heavenly Father recognizes and cares about the evil and pain we experience in this world at the hands of others, He will not remove their agency because doing so would violate the boundaries that promote our progression.”

Within the context of those doctrinal foundations of the gospel, Ogles spoke of the perpetrators, victims, and others associated with sexual assault.

While some mistakenly believe sexual assault only occurs with strangers suddenly assaulting unknowing victims, the data from the BYU campus climate survey reflects what is seen in national data—that a current or former boyfriend, girlfriend, or spouse perpetrated more than half of the incidents.

“These findings suggest that some men, and I use men because the data clearly indicate men are far more likely to be the perpetrator than women, either misunderstand the nature of consent in a relationship, misinterpret their partner’s wishes, or understand their wishes and directly ignore them as they force their own will upon a partner,” he said.

“The pain of being physically violated is much worse than the brief and potentially awkward moment when someone lets you know that they would like to be more physically intimate.”

For Latter-day Saints, a sexual relationship is sacred and only sanctioned by God within marriage “where spouses freely give themselves to one another emotionally and physically.”

But consent is still vital after marriage.

“Marriage itself is not consent to intimacy,” he said. “Spouses have the same obligation to respect one another’s agency and physical and personal space as in any other relationship.”

Ogles said his study of sexual assault has changed his ideas and behavior concerning personal space and respect for another’s agency. Sharing an experience he had while playing with his grandchildren, Ogles told of how he would oftentimes chase and tickle them. Although his roughhousing was meant to be in fun, he realized proceeding while ignoring their protests was potentially problematic.

“Although it was innocent and all in good fun, perhaps it was not OK for me to tickle them in spite of their objections,” he said. “I wondered, ‘What am I teaching them about agency, their voice, and personal space? Will these early learning experiences influence their perceptions about what is and is not OK in future relationships?’”

No matter the intent, all will be held accountable for their actions.

“Those who violate another’s agency through force, coercion, ignoring, or naively guessing about their wishes regarding sexual contact will stand accountable for their actions. … If you are one who has committed this sin, I encourage you to see your bishop, to repent, to cooperate with legal authorities where necessary, and to seek professional help. The seriousness of your acts may require you to face civil and Church discipline. But full repentance will bring the sweet relief of forgiveness, peace of conscience, and a renewed life.”

“These children of God experienced intimate, personal violations to which they did not consent,” he said.

“To those who have had traumatic experiences, please know there are people—many people—who are concerned for your welfare and many people who have experienced on a personal level what you have experienced,” he said. “You are not alone. We know you were unjustly harmed and you may continue to have negative thoughts and feelings.”

Acknowledging that oftentimes a victim’s view of his or her personal safety, the world, and people has changed, Ogles recognized victims often feel frightened, damaged, unworthy, ashamed, or helpless.

“Some of you are already on the road to recovery and beginning to understand you were not responsible when someone violated your agency—you are not damaged or worth less because of the incident,” he said. “You are children of God and He stands ready to assist you. … Your healing can occur either with or without professional help depending on your circumstances. Yet we know the road you now travel is often filled with suffering and doubt, and we are ready to help.”

Addressing those who “self-blame” or take responsibility for abuse, Ogles reminded them, “You are not responsible for that to which you did not consent! That is the essence of agency.”

“When one’s agency and ability to determine what happens to their own body are disregarded, the victim may automatically respond to the situation with feelings of guilt or shame because they can imagine ways that they think they ‘could have’ or ‘should have’ avoided the situation,” he said. “After an assault, a victim may attempt to reestablish a sense of control and order to their life by taking some of the blame for what happened.”

Sometimes friends and relatives may think the victim did something to contribute to the situation, something Ogles referred to as “victim blaming.”

“Let me be very clear about the responsibility for sexual assault,” Ogles said. “The perpetrator is responsible for their actions. A victim was deprived of their agency and they are not accountable for what happened to them without their consent—no matter what they were wearing, where they were, or what happened beforehand. They did not allow, sanction, or encourage the assault.”

To those who are victims, “There is hope! There is healing!” Ogles taught. Healing comes through the power of the Atonement of Jesus Christ.

How to help loved ones

To those who have neither been perpetrators or victims of sexual assault and who are looking for ways to help friends and relatives, Ogles suggested being an “example of the believers” by living a life of kindness and compassion.

“If a friend or relative tells you they have been the victim of sexual assault or sexual abuse—and our data suggest they are most likely to tell a friend or roommate—tell them you believe them, express your concern for them, and encourage them to seek professional help.”

“It is my prayer that the doctrines and principles of the gospel shed light on this difficult topic in such a way as to bring hope rather than discouragement.” 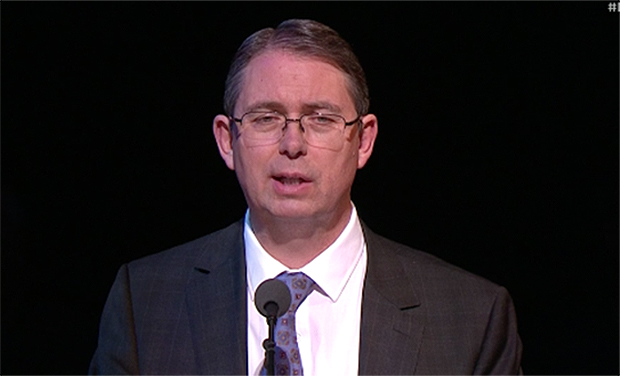 Benjamin M. Ogles speaks during a campus devotional at Brigham Young University on January 30. Image is a screenshot from the broadcast.