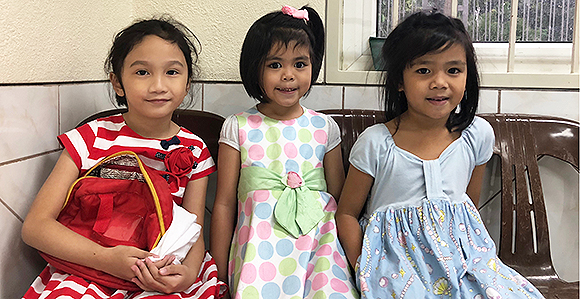 Children attend Primary in the Philippines. August 2018 marks the 140th anniversary of the organization. Photo by Haidi F. Fajardor.

“[Primary children] are participating in the work of salvation … , and we are seeing more and more examples of how powerfully they can be part of building this kingdom, God’s kingdom, here on the earth.” —Sister Joy D. Jones, Primary General President

Sister Joy D. Jones, Primary General President, recently returned to her hometown, The Dalles, Oregon. While there, she visited familiar places, including the church with the baptismal font where she was baptized.

While she was visiting, local leaders asked her to speak in sacrament meeting at one of the local wards. As Sister Jones looked out at the congregation she noticed a familiar face.

“There sat the Primary president from my childhood,” she told the Church News.

As she stood from the pulpit and looked at the woman’s face, she immediately remembered the good feelings she had as a child in Primary.

“I remember her light and that she blessed my life,” Sister Jones said. “Oh, that every Primary child can have a such a memory of their time in Primary.”

The influence of a Primary teacher has the potential to bless a child’s entire life, the leader taught.

Like the organization’s early leaders, the Primary Presidency today shares the same goal and mission—to help children feel Heavenly Father’s love and develop an understanding of their divine identity.

“A great and very important movement”

Aurelia Spencer Rogers, a mother of 12 living in Farmington, Utah, in 1878, noticed many of the neighborhood boys were running freely throughout the town during the day and night. Because of the demanding schedule of parents and older children—both on the farm and running a household—the young boys were often left with little supervision.

Concerned the boys were becoming too mischievous and not receiving enough direction, Rogers decided she would gather with the boys to teach them basic principles and values.

Taking her concerns to Sister Eliza R. Snow, then-Relief Society General President, Rogers shared her idea with the Church leader in a letter.

Sister Snow responded in a letter: “The spirit and contents of your letter please me. I feel assured that the inspiration of heaven is directing you and that a great and very important movement is being inaugurated for the future of Zion. President John Taylor fully approbates it.”

With the approval from Sister Snow and the prophet, Sister Rogers began planning for their first meeting. Children ages 4 to 14—both boys and girls—were invited to participate.

On Sunday, August 25, 1878, some 224 children met in the Farmington Rock Chapel, where they participated in singing, poetry, lessons, and activities. The idea was so effective that within a decade almost every Church settlement included a Primary. 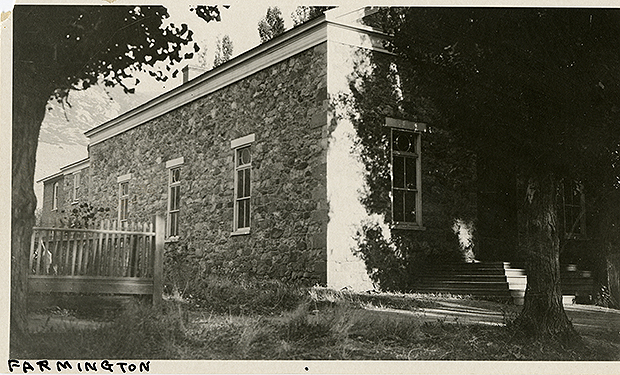 Although Sister Rogers never served as an official president of the Primary organization, she is considered the organization’s founder.

Sister Louie Bouton Felt, a 30-year-old woman serving as the Salt Lake City Eleventh Ward’s Primary president, became the organization's first Primary General President in 1880. She served in that calling for 45 years, until 1925. 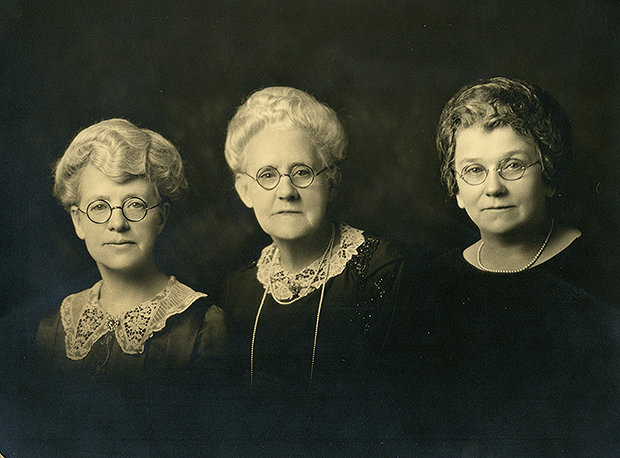 Louie B. Felt, the first official Primary General President, and her counselors, May Anderson and Clara Beebe. By Lumiere Studio of Salt Lake City.

Since that time there have been 13 Primary General Presidents.

“Sometimes I like to walk downstairs [in the Relief Society Building] and look at the pictures on the wall of the past leaders,” Sister Jones said. “How we would love to have a conversation with them today. I do feel accountability to my Heavenly Father first and foremost, and also to these spirit sisters. They are watching, they are aware, and they care.” 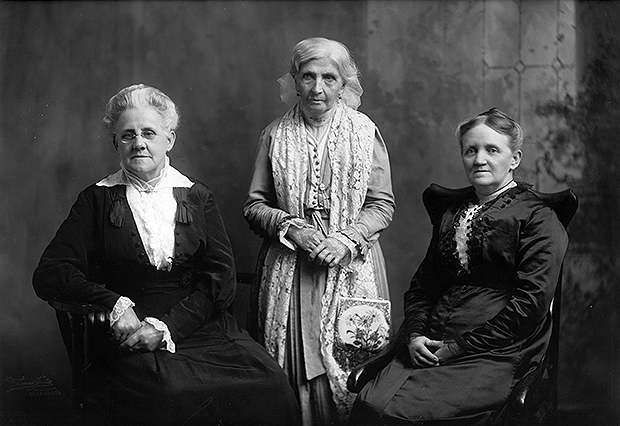 A Primary for the future

Since the first meeting in Farmington, Utah, in 1878 with 224 children, the Primary organization has continued to grow to more than 1 million members—those ages 18 months to 11 years old—worldwide today.

“[The early leaders] may not have known what Primary was going to turn into, but Heavenly Father knew all along,” said Sister Harkness. “I feel the same way with what’s happening in Primary right now. The inspiration of heaven is guiding Primary, and a great and very important movement is still taking place amongst Heavenly Father’s children.”

A mural depicting the first meeting of the Primary Association. Painted by Lynn Fausett and Gordon Cope.

Although some of the official names and programs of Primary have changed over the years, one element remains the same.

“The one thing that never changed is the love those leaders had for those children and the love that our leaders today have for the children,” Sister Jones said. “And Heavenly Father’s love is what generates that love. It’s all coming from and through Him, and what a gift it is because we want our children today to feel His love. They have got to feel His love and know that they are His.”

Understanding their divine identity is one of the most important things a child can learn, said Sister Franco. 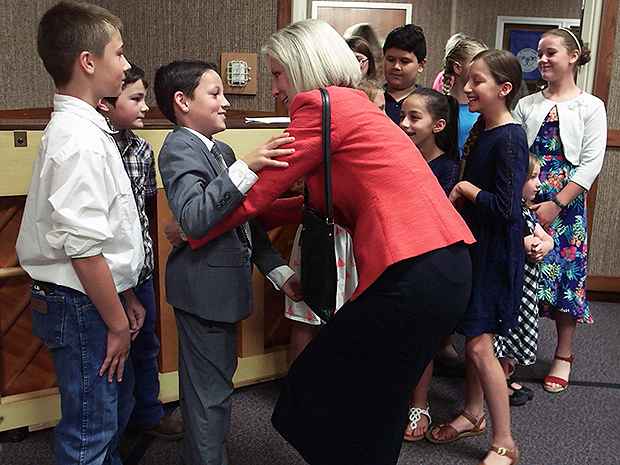 “They are participating in the work of salvation as children, and we are seeing more and more examples of how powerfully they can be part of building this kingdom, God’s kingdom, here on the earth.”

Recognizing the climate of the world today, the leaders said it is important for parents, leaders, and children to keep moving forward in faith.

Celebrating the children’s first meeting in the Farmington Church building, Sister Jones said, “We look to the pioneers for their examples, but these children [today] are pioneers in their own right. If we can teach them that concept—to keep going one more step, one more mile, keep your eyes on the prize which is eternal, we will help them enter and keep on the covenant path.” 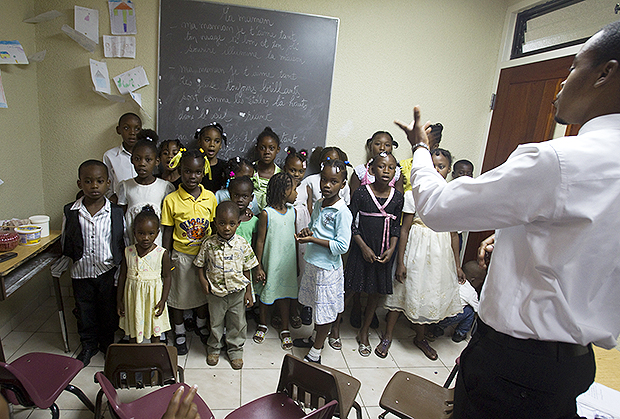 Children sing during Primary classes in the Torcelle Ward at the Petionville meetinghouse in Petionville, Haiti, on Sunday, May, 23, 2010. Photo by Mike Terry, Deseret News. 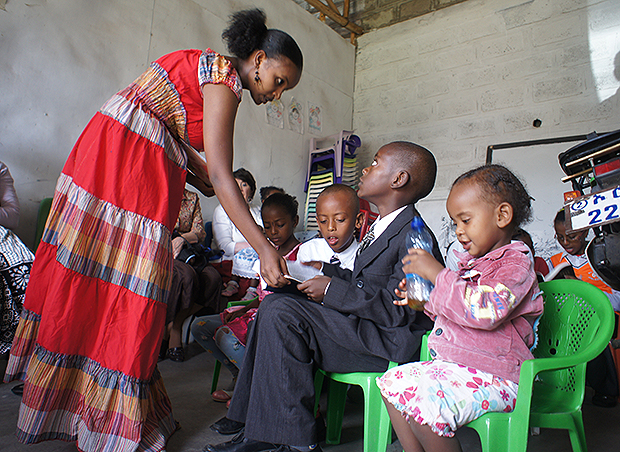 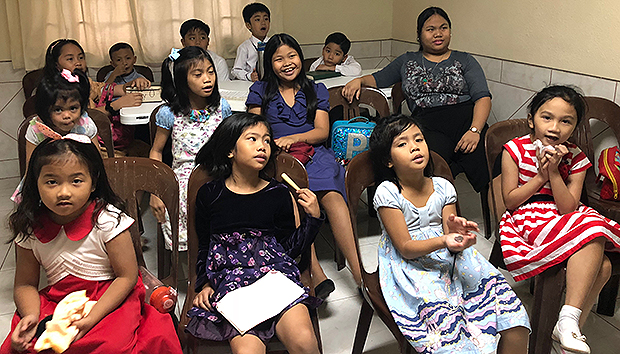