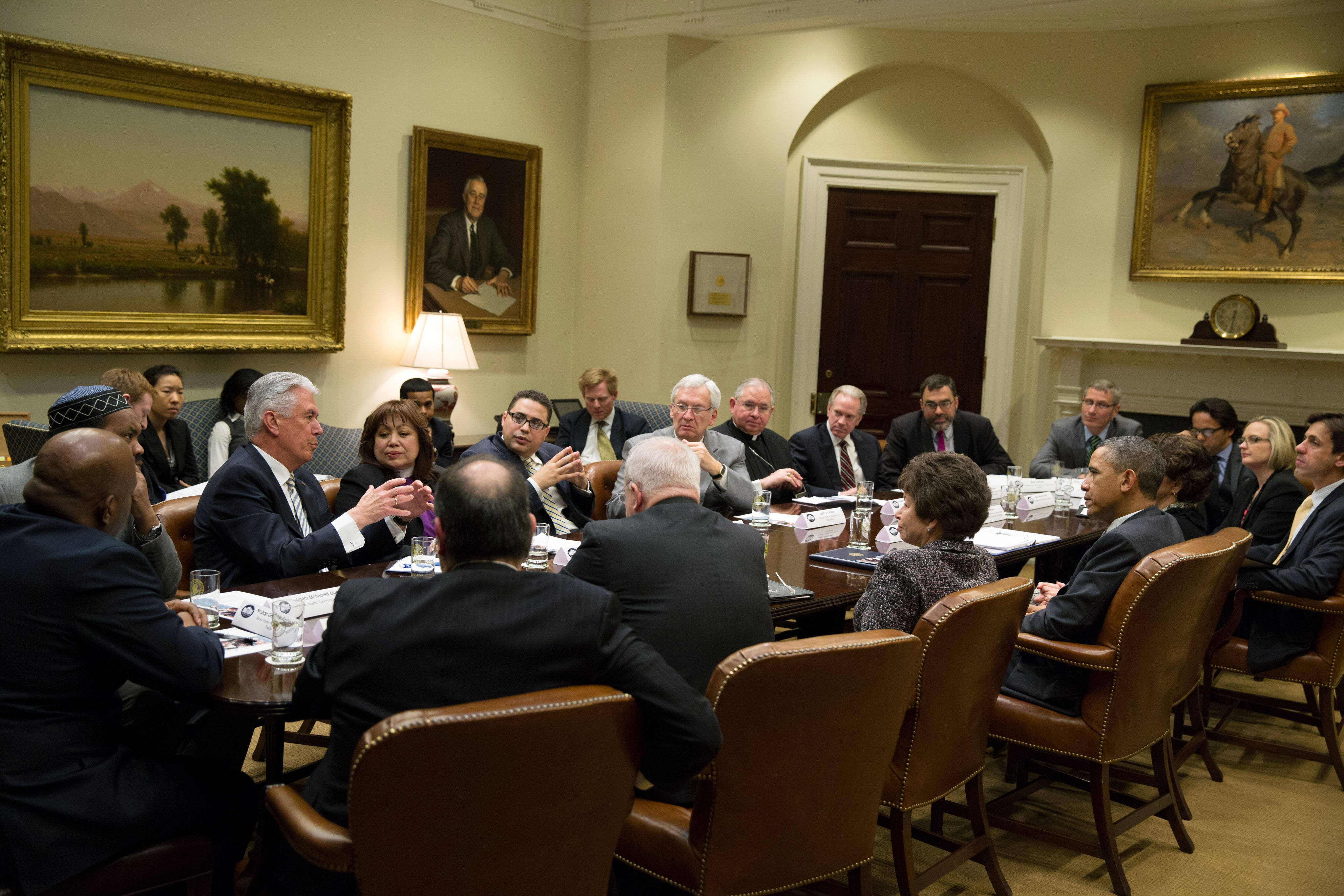 Photo courtesy of the White House.

“[Latter-day Saints,] of all people, should be cognizant of issues surrounding immigration. Look at our history; look at the pioneers who came here. It was not too long ago.” —President Dieter F. Uchtdorf of the First Presidency

President Dieter F. Uchtdorf and 13 other faith leaders met with President Barack Obama in the White House on March 8 to discuss the topic of immigration.

“President Obama was very warm and welcoming, listening to and making reference to every comment. He was responsive to what everyone said,” President Uchtdorf, Second Counselor in the First Presidency, said during a conversation with the Church News in his office on March 12.

“It was very interesting to see how faith leaders support efforts to find a responsible solution in comprehensive immigration reform,” President Uchtdorf said. “It has to be an enforceable law, but it has to have a lot of compassion, love for neighbor, family unification, and common sense.”

He has first-hand experience on immigration, having come through different systems legally as he immigrated to the United States from Germany.

“I came to the United States on visitor’s and work visas and lived here on a green card for a long time,” he said. “Then I went through the naturalization process. Early in my life, I was twice a refugee. I can relate to what is happening.”

Further, he said that Latter-day Saints, “of all people, should be cognizant of issues surrounding immigration. Look at our history; look at the pioneers who came here. It was not too long ago.

“The strength of the United States for all the nations around the world was always to be a melting pot where everyone can come together and then be an American.”

One of President Uchtdorf’s main concerns is families. “Breaking up families who have lived in the nation for generations as law-abiding, productive, and helpful neighbors does not seem right.”

He noted that some people came to the United States decades ago—“almost invited to come here to clean homes, work in the yards, do the construction work, harvest fruits and vegetables, and do other work.” Most have been good neighbors, worked hard, lived responsibly, and raised families; some are grandparents, he noted. Now, he said, because of a change in partisan perception of immigration, many who were welcomed long ago are now being deported, causing their families to be divided. “To tell them, ‘Your children can stay but you must go,’ is not the way we see compassion or love for our neighbor.”

President Uchtdorf said he used the Utah Compact, a values-based document for resolving issues pertaining to immigration, as a guide for the remarks he made during the White House meeting.

After the Utah Compact was signed by a spectrum of community leaders on November 11, 2010, the Church issued an official statement on immigration, which declared:

“Around the world, debate on the immigration question has become intense. That is especially so in the United States. Most Americans agree that the federal government of the United States should secure its borders and sharply reduce or eliminate the flow of undocumented immigrants. Unchecked and unregulated, such a flow may destabilize society and ultimately become unsustainable.

“As a matter of policy, The Church of Jesus Christ of Latter-day Saints discourages its members from entering any country without legal documentation and from deliberately overstaying legal travel visas.

“What to do with the estimated 12 million undocumented immigrants now residing in various states within the United States is the biggest challenge in the immigration debate. The bedrock moral issue for The Church of Jesus Christ of Latter-day Saints is how we treat each other as children of God.”

Further, the statement declares this issue is one that must ultimately be resolved by the federal government.

“In furtherance of needed immigration reform in the United States,” the statement continues, “The Church of Jesus Christ of Latter-day Saints supports a balanced and civil approach to a challenging problem, fully consistent with its tradition of compassion, its reverence for family, and its commitment to law.”

Immigration reform needs to be established by the legislative process, President Uchtdorf said. “As a Church, we do not tell anyone how to vote. We are totally politically neutral, but we stand up for the values we have. We supported the Utah Compact with its values and principles; we have done this publicly and in writing, so everyone knows that. We hope that our view of these important matters for our communities will, at least, be considered by those who have to make the final decisions.”