President Uchtdorf Recalls Being a Refugee, Asks Members to Reach Out

President Dieter F. Uchtdorf, Second Counselor in the First Presidency, visits with a refugee in Europe.

“We are to reach out to those in need and help them—and not just by impressive declarations, but by one-on-one help, eye-to-eye help, by lifting up those who are in need.” —President Dieter F. Uchtdorf of the First Presidency

During a recent trip to Ostrava, Czech Republic—the city of his birth—President Dieter F. Uchtdorf reflected on the current refugee situation in Europe, his own family history, and the history of Latter-day Saints.

“It was very nice to go to my own birthplace,” said President Uchtdorf, Second Counselor in the First Presidency, who traveled to Europe May 9 through May 24. “We stood in front of the house where I was born in the middle of Ostrava.”

With his wife, Sister Harriet R. Uchtdorf, President Uchtdorf walked the streets of the town where he was born and lived until shortly after his fourth birthday.

“Wonderful memories came back of when I was child,” he said. “It was nice to be able to visit there with my wife, Harriet, and go into the apartment where we lived. It was empty and worn down, but we were in there. It was beautiful to have a memory of that place.”

President Uchtdorf said shortly after his fourth birthday, however, his family had to leave the city because of the war. They reached East Germany with help from strangers. “We came in as refugees. … People helped us.”

During his visit to the Czech Republic, President Uchtdorf had a chance to visit with modern-day refugees. 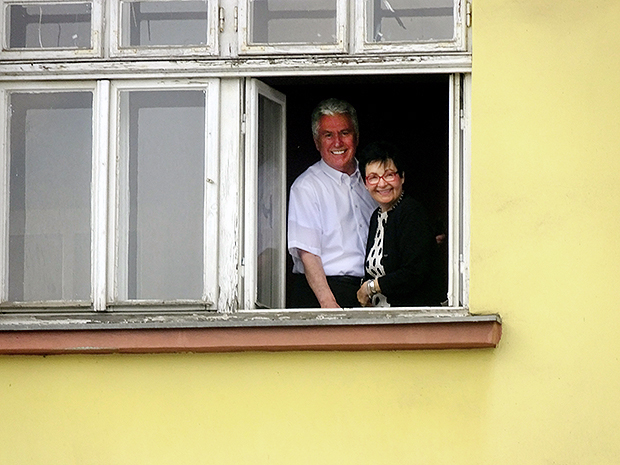 President Dieter F. Uchtdorf, Second Counselor in the First Presidency, and Sister Harriet Uchtdorf look out the window of the apartment where President Uchtdorf lived until he was four years old in Ostrava, Czech Republic, on May 18.

Many are being helped by charitable organizations, including the Church, “to find their path into a home where they can feel safe, where they can have their children grow up in peace.”

Reaching out to refugees takes a certain level of humility and love of fellow beings that is not always easy—even in the Church, said President Uchtdorf.

But, he added, Church members don’t need to look too far into their own history to understand the importance of helping others.

The example, he said, is Quincy, Illinois—where early Latter-day Saints found refuge after being driven across the Mississippi River from Missouri.

“They arrived at the river in the dead of winter with nothing, and there on the other side of the river was Quincy,” explained President Uchtdorf. “The city of Quincy had a population of 1,500. The Saints were on the other side of the river with 10,000. What an overwhelming amount of refugees for a community to take care of, and Quincy did it. They helped us. It was wonderful. It was perhaps not always easy, it wasn’t always happy, but they helped us. …

“Sometimes as Church members we have to see where we are coming from before we say, ‘We cannot help everyone. There are too many. That is too much. You cannot ask for so much.’ Fortunately, Quincy did not say that. They accepted us.”

President Uchtdorf said many of today’s refugees come from war zones but that “there are also within our own stakes, wards, and branches and our own families some who may feel like emotional, spiritual, or temporal ‘refugees.’ Sometimes we don’t reach out to them because they are so close to us. It is often easier to help those from far away rather than someone in our own families with whom we might have a challenging relationship. We need to reach out to all, close and far, to give Christlike help. We need to learn in this process to recalibrate our own efforts.”

He said that it is a blessing to relearn and refocus our ways of dealing with one another. “See how those feelings of charity toward foreign refugees can be refined and passed on to a neighbor or even a family member.”

President Uchtdorf emphasized that Latter-day Saints today should follow the Savior’s example but, at the same time, be open and not let current situations overburden them. “But we have to be mindful of the needs of those who cannot help themselves and help them to get into a position of self-reliance.”

“We are children of one Heavenly Father,” he said. “We are all brothers and sisters. Our two great commandments are to serve God and our fellowman. We are to reach out to those in need and help them—and not just by impressive declarations, but by one-on-one help, eye-to-eye help, by lifting up those who are in need.”