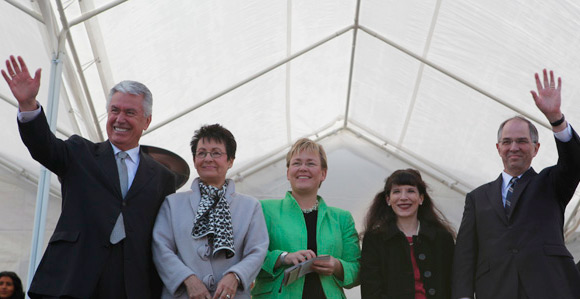 President Dieter F. Uchtdorf of the First Presidency (far left) and Elder Neil L. Andersen of the Quorum of the Twelve Apostles (far right) wave to the crowd at the cultural celebration held the evening before the dedication of the Quetzaltenango Guatemala Temple.

“[The temple] has a glowing shine like a jewel, and it is a jewel for this area of this country.” —President Dieter F. Uchtdorf, Second Counselor in the First Presidency

The Quetzaltenango Guatemala Temple was formally dedicated on Sunday, December 11, 2011, in three sessions by President Dieter F. Uchtdorf, Second Counselor in the First Presidency of The Church of Jesus Christ of Latter-day Saints.

The dedicatory sessions were broadcast to congregations of the Church within the temple district.

“What a beautiful temple this is,” President Uchtdorf said at Saturday’s cultural celebration, where youth performers from area congregations danced, sang, and presented a visual display of local history and culture. “It has a glowing shine like a jewel, and it is a jewel for this area of this country.”

The Quetzaltenango Guatemala Temple is the Church’s 136th temple worldwide and fifth in Central America. This temple will serve approximately 60,000 Latter-day Saints. Other temples in Central America are located in Guatemala City, Guatemala (1984); San Jose, Costa Rica (2000); Panama City, Panama (2008); and San Salvador, El Salvador (2011). Another temple is under construction in Tegucigalpa, Honduras.