With his wife, Sister Harriet Uchtdorf, on his right and Elder Kent F. Richards on his left, President Dieter F. Uchtdorf breaks ground for the Tucson Arizona Temple on Saturday morning, October 17.

Near where the Mormon Battalion traversed nearly 169 years ago and in a land rich with diversity, President Dieter F. Uchtdorf, Second Counselor in the First Presidency, presided at the groundbreaking ceremony for the Tucson Arizona Temple and offered a dedicatory prayer Saturday morning, October 17.

“We are grateful to be here,” President Uchtdorf told the audience, who pulled out umbrellas during a brief rain at the start of the program. He said he had volunteered to come for the groundbreaking ceremony because of his family’s ties to Arizona and pilot training he had received here.

“We have a very personal relationship to Arizona,” he said. “We love Arizona.”

The 7-acre site for the temple is north of downtown Tucson, Arizona’s second largest city, in the Catalina Foothills. The temple will overlook the Sonoran Desert in southern Arizona and the Tucson metro area, home to nearly a million residents and more than 30,000 Church members.

President Uchtdorf noted the diversity of the area, from Native Americans, Latinos, and pioneers to others who make the community what it is today.

“You are a marvelous community of people, sticking together with a diversity of history, cultures, and people,” he said during his remarks.

He referred to the Mormon Battalion coming through the area in 1846 and said it is “remarkable” how the Church has grown since then.

Other participants on the program included Elder Lynn G. Robbins of the Presidency of the Seventy; Elder Kent F. Richards of the Seventy and Executive Director of the Church's Temple Department; Tucson Arizona Rincon Stake President A. Cole Thies, who offered the invocation; Gary D. Rasmussen, groundbreaking committee chairman; and Suzy Kartchner, who offered the benediction.

A multistake choir provided the music. After the formal ceremony and dedicatory prayer, all attending were invited to take a turn holding a shovel and turning over dirt.

In the dedicatory prayer, President Uchtdorf said, “We have come together with joyful hearts and with a feeling of overwhelming gratitude to participate in the groundbreaking for a house of the Lord, even to prepare for the construction of a sacred temple in Tucson, Arizona.”

He continued: “Heavenly Father, our hearts are filled with gratitude and love for Thee and Thy Son. Thou knowest the rejoicing of those who have lived here and who prepared the way for the expansion of Thy work in this area. Many have already gone beyond, just a step beyond our view. Wilt Thou, Heavenly Father, grant that they will be aware of this supernal moment and that we may be true to the heritage which is ours, true to the trust vested in us, true to Thee, and true to the work.”

President Thomas S. Monson, at the October 2012 general conference, announced plans for a temple to be built in Tucson. It will be Arizona’s sixth temple. There are approximately 400,000 Church members in Arizona.

More than 700 attended the ceremony, and the event was broadcast to local meetinghouses.

The two-story, 34,000-square-foot temple conforms to local zoning requirements and instead of a steeple, the mission-style design includes a cupola with a peak about 27 feet above the base and platform.

Attendees arrive for the groundbreaking ceremony at the temple site overlooking the Tucson metro area on Saturday morning, October 17. Photo by Scott Adair. 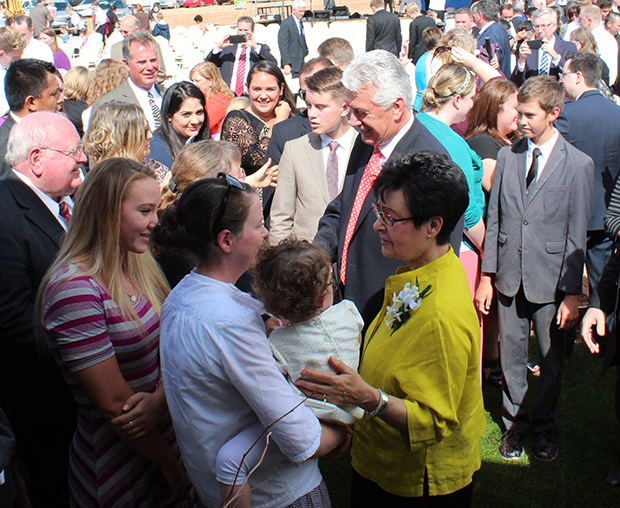 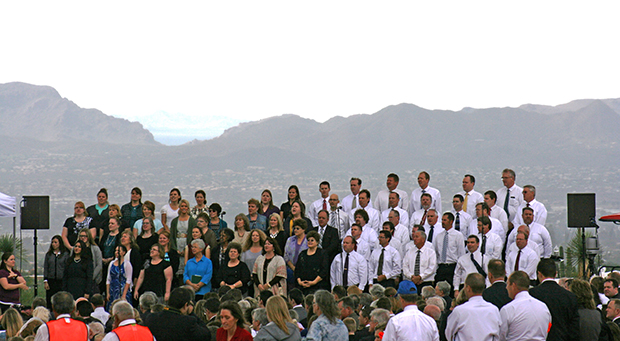 A multistake choir sings “I Love to See the Temple” at the Tucson Arizona Temple's groundbreaking ceremony on Saturday morning, October 17. Photo by Scott Adair.