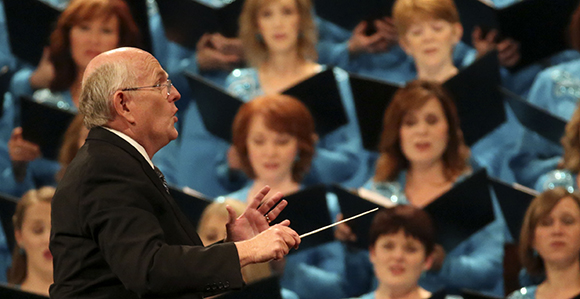 Mack Wilberg conducts The Tabernacle Choir at Temple Square during the Sunday afternoon session of the 188th Semiannual General Conference of The Church of Jesus Christ of Latter-day Saints in the Conference Center in downtown Salt Lake City on Sunday, October 7, 2018.

“We yearn for Thee, we plead in meekness, Thy trust in us may we fulfill.” —“Our Prayer to Thee”

President Russell M. Nelson’s final contribution to October 2018 general conference wasn’t his concluding remarks and temple announcements in the Sunday afternoon session. Rather, it was the conference’s closing hymn he penned, as performed by The Tabernacle Choir at Temple Square immediately after those remarks.

Those who attended or viewed the Sunday afternoon session may be surprised to learn that the lyrics of “Our Prayer to Thee” came from President Nelson. There was no announcement nor acknowledgement from President Dallin H. Oaks, First Counselor in the First Presidency, who was conducting the meeting, when he announced the meeting’s closing speaker, hymn, and benediction.

Rather, he simply stated the concluding hymn’s title and performing group, with no attention given to the author, who would first stand and give his final remarks of the weekend.

On April 5, 2003, then-Elder Nelson—a member of the Quorum of the Twelve Apostles at the time—concluded his Saturday morning session conference talk with a brief introduction to the musical piece. “I have felt impressed to conclude this message on prayer with a prayer presented as a hymn,” he said, acknowledging the help of Tabernacle Choir director Craig Jessop and assistant director Mack Wilberg, the latter’s arrangement meshing Elder Nelson’s text with Joseph Parry’s music.

The hymn’s sheet music was featured on the inside back cover in the following month’s Ensign magazine. (Lyrics are found below.)

Parry was a prominent 19th-century Welsh composer and musician and is not to be confused with fellow countryman John Parry, the Tabernacle Choir’s founding director. Actually, the music for “Our Prayer to Thee” is a composition used in a hymn found in the Church’s Hymns—“O Home Beloved,” hymn number 337, which is listed as for a men’s choir.

Joseph Parry, who worked, taught, and performed throughout Great Britain and the United States, in fact once visited the Salt Lake Tabernacle. In 1898, he adjudicated the third annual Salt Lake Eisteddfod, a local version of the Welsh festivals of literature and music that date back to the 12th century.

“Our Prayer to Thee” has been performed at other major Church events, including the June 2018 Worldwide Devotional for Youth, at which President Nelson and Sister Wendy Nelson spoke.

In a May 2008 Church Educational System fireside for young single adults and high school seniors, then-Elder Nelson spoke on the power and protection provided by worthy music. A choir from the Ogden Institute of Religion sang “Our Prayer to Thee” as the closing hymn.

He preceded the final musical number by saying, “I wrote the words to that song as my prayerful feelings for our Father in Heaven. Please receive this prayer as part of my testimony that God is our Father and that we are His children. I know that He lives. Jesus is the Christ and the head of this Church that bears His holy name.”

“Our Prayer to Thee” wasn’t the only hymn sung during the October 2018 general conference that was written by a latter-day prophet or apostle. The others include:

President Nelson, who sang in choirs and musicals in high school and college, plays the organ and piano and has perfect pitch. Also known as absolute pitch, perfect pitch is the ability to identify or play a musical note without a reference note.

And “Our Prayer to Thee” is not the only hymn President Nelson has written. Another is titled “My Message.” Once when accepting an award and allowed 30 seconds or less for a response, he simply recited the brief text as his acceptance remarks:

“Our God is my maker;
Parents dear are my guide;
An angel wife, my true love;
Children choice are my pride.
The Lord is my Light;
His endless truth, my law.
My joy is in service to others;
My message is, my life.”

The three-verse lyrics of “Our Prayer to Thee”:

“Our Prayer to Thee”

We pray to Thee, our Heavenly Father,
With grateful hearts and fond emotion.
We thank Thee for our great Exemplar—
Thy beloved and atoning Son—
Who have Himself as sacred ransom,
That we could live again with Thee!
Our joy is full, our song so gladsome;
Renew our faith and hope in Thee.

We pray to Thee, our Heavenly Father,
With thankful hearts and adoration.
We thank Thee for our loving Savior,
Who redeemed us from death and sin;
He gave to us His truth to brighten
Our path, to help us walk His way,
To love and serve, to lift and lighten
The lives of all who will obey.

We pray to Thee, our Heavenly Father,
With gratitude and deep devotion
For loving faith and endless splendor—
Eternal glory—bound as one!
We pray for mercy and forgiveness
And hope to know Thy holy will.
We yearn for Thee, we plead in meekness,
Thy trust in us may we fulfill. 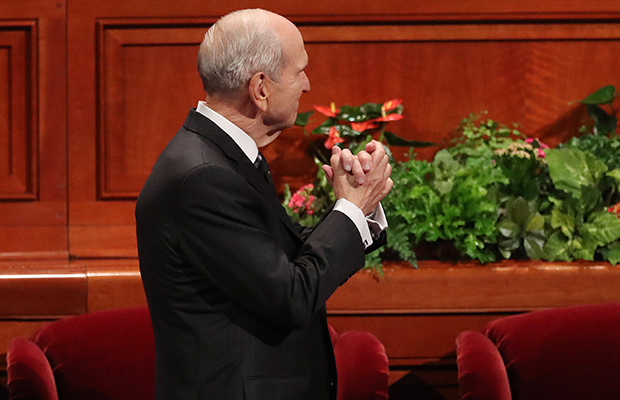 President Russell M. Nelson of The Church of Jesus Christ of Latter-day Saints acknowledges The Tabernacle Choir at Temple Square during the Saturday morning session of the 188th Semiannual General Conference in the Conference Center in Salt Lake City on Saturday, October 6, 2018. Photo by Jeffrey D. Allred, Deseret News. 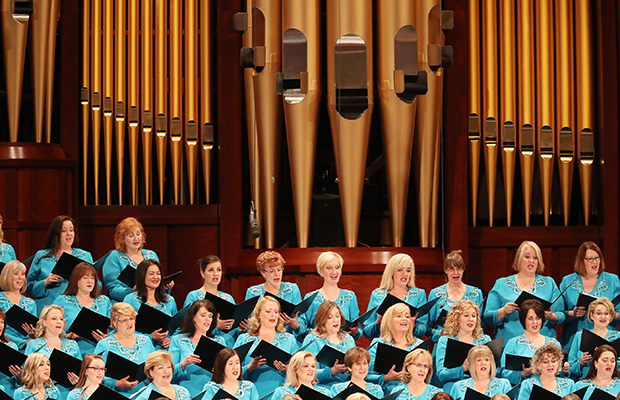 The Tabernacle Choir at Temple Square sings during the Sunday afternoon session of the 188th Semiannual General Conference of The Church of Jesus Christ of Latter-day Saints in the Conference Center in Salt Lake City. Photo by Jeffrey D. Allred, Deseret News.