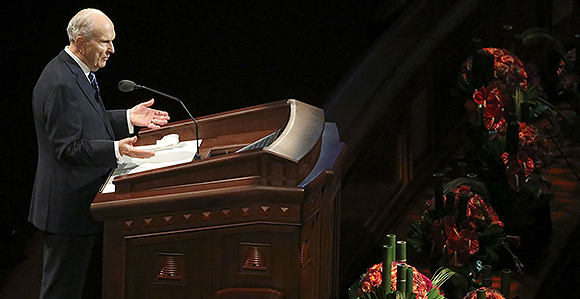 President Russell M. Nelson speaks during the Sunday morning session of the 188th Semiannual General Conference of The Church of Jesus Christ of Latter-day Saints in the Conference Center in downtown Salt Lake City on Sunday, October 7, 2018. Photo by Kristin Murphy, Deseret News.

One year ago this week—just months after being sustained as the 17th President of The Church of Jesus Christ of Latter-day Saints—President Russell M. Nelson issued a clarion call to Church members worldwide.

“The Lord has impressed upon my mind the importance of the name He has revealed for His Church, even The Church of Jesus Christ of Latter-day Saints,” he said in an August 16, 2018, statement. “We have work before us to bring ourselves in harmony with His will. In recent weeks, various Church leaders and departments have initiated the necessary steps to do so.”

The call lit up social media and set in motion an update to the Church’s style guide. In the months after releasing the statement, Church leaders renamed numerous communications channels: websites, social media accounts, mobile apps, and email domains were all impacted.

“It is a testimony of what can be done with strong and decisive leadership,” said historian Patrick Q. Mason, Leonard J. Arrington Endowed Chair of Mormon History and Culture at Utah State University.

President Nelson has “deployed the full mantle of leadership” regarding the use of the full and proper name of the Church, he said. “This was a committed and concerted effort from the top down.”

On October 7, 2018, President Russell M. Nelson stood before a worldwide congregation and emphasized the name of The Church of Jesus Christ of Latter-day Saints, saying he was “compelled to discuss . . . a matter of great importance.”

“The name of the Church is not negotiable,” said President Nelson. “When the Savior clearly states what the name of His Church should be . . . , He is serious. And if we allow nicknames to be used or adopt or even sponsor those nicknames ourselves, He is offended.”

Just two days before President Nelson’s historic address, the world-renowned Mormon Tabernacle Choir changed its name to “The Tabernacle Choir at Temple Square.” The former was a brand that had stood for more than 100 years.

“A new name for the Tabernacle Choir will represent a change after so many years,” said Ron Jarrett, president of the Choir. “The name may change, but everything that people know and love about the choir will not only be the same but will get better and better.”

They looked at several different approaches and even considered asking for the name to be grandfathered. “But we soon realized that for the choir to perform its role within the Church, to support the mission of the Church, that we could not have the choir have a name that was no longer consistent with the general direction of the Church.”

Without a lot of fanfare, the Choir announced the change. The new name was used publicly for the first time at the Church’s October 2018 general conference.

“We tried to focus on what wasn’t changing,” said Barrick. “The historic significance of the choir, the connection to our home in the tabernacle, the music, and all the great heritage behind the choir name.”

Barrick said the Choir’s name change set the stage for other changes that followed.

On March 5, the First Presidency announced changes to the names of LDS.org, Mormon.org, and other Church communication channels.

“Jesus Christ is at the center of His Church and we will be blessed as we strive to make Him the center of our lives,” wrote the First Presidency in the letter titled “Using the Correct Name of the Church.”

Keith A. Erekson, director of the Church History Library, said using the revealed name of the Church was a decision with huge ramifications. The clearest indicator of the size of this issue: “How long it is taking to comply.”

The Church “can change the name of the choir, it is gradually moving through websites and Church products, but it may be several years before every piece of Church material has been updated,” he explained.

He said the name of the Church is one example in a shift in how Church leaders are ushering in change. “In the past, Church leaders would prepare for a change, do all the homework and announce it in a package,” said Erekson. “Under President Nelson, we have seen him announce a direction and admit we haven’t figured everything out yet, but we will do it together. . . . In a way it brings all of us into the process of making the change a reality.”

During the past year, Latter-day Saints have also had to learn to be more precise in the way they talk about the Church.

“In the past you could use one word—‘Mormon’—to signify the Church, the members, the culture, the traditions. And now if you want to talk about all of those, it requires you to be more precise.”

It is a work in progress, Erekson said. “We are going to continue to find things on a website, in the materials center in our chapels, in our homes, that reflect past usage. It is important for us to say, ‘That is OK.’ . . .

“We are working through a process. It may take a decade or a generation to cycle through all of the change.”