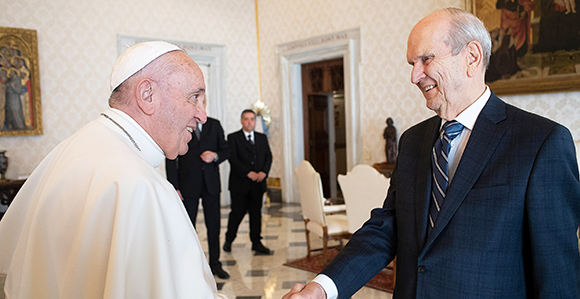 President Russell M. Nelson of The Church of Jesus Christ of Latter-day Saints meets with Pope Francis at the Vatican in Rome, Italy, on Saturday, March 9, 2019. Photo courtesy of the Vatican.

In his nearly 34 years serving in the Quorum of the Twelve Apostles prior to becoming President of The Church of Jesus Christ of Latter-day Saints, then Elder Russell M. Nelson was able to visit 134 countries and dedicate or participate in the dedication of 31 of those countries for the preaching of the gospel of Jesus Christ.

Since becoming the President of the Church in January 2018, President Nelson has traveled to 28 of the 195 officially recognized nations around the world.

To say he is well traveled would be an understatement. But what is perhaps more impressive than simply the number of stamps he has added to his passports in his role as a leader of a worldwide Church is the number of world leaders he has been able to personally meet and influence.

Born “a natural diplomat”—as both President James E. Faust and Elder Gerrit W. Gong of the Quorum of the Twelve Apostles have referred to him—President Nelson has had many opportunities throughout his life, first as a world-renowned surgeon and then as a worldwide religious leader, to enhance his natural gift for knowing how to read both people and situations.

During his 95 years of life, President Nelson has also had the unique opportunity to personally interact with all but the first six of the 16 modern-day Church Presidents who preceded him. And while he has undoubtedly learned a great deal from the examples of such leaders in his life, the thing that has perhaps most influenced his abilities as a successful world leader and diplomat is his simple belief that “everyone is a child of God and deserves to be treated that way.”

Here is a look back at some of the key world leaders President Nelson has met throughout his life and the impact that those relationships or meetings have had on helping to spread the gospel and enhance the reputation of the Church. 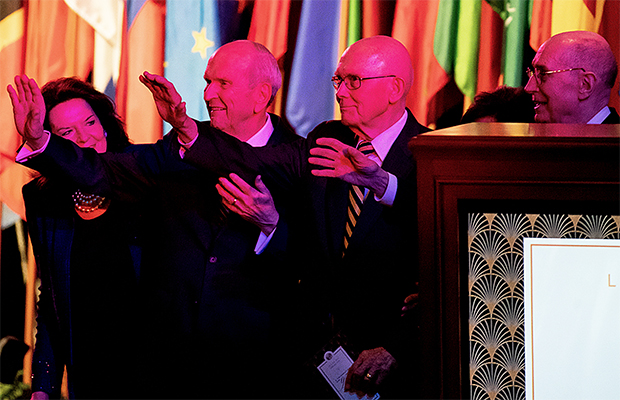 President Russell M. Nelson of The Church of Jesus Christ of Latter-day Saints; his wife, Sister Wendy Nelson; and his counselors, President Dallin H. Oaks and President Henry B. Eyring of the First Presidency wave to people at the end of a celebration of President Nelson’s 95th birthday at the Conference Center in Salt Lake City on Friday, September 6, 2019. Photo by Spenser Heaps.

Influence from 34 Years as an Apostle

In the late 1970s, following advice from President Spencer W. Kimball to learn the languages of some of the millions of people who had not yet received the gospel in their lives or countries, then Dr. Nelson took on the task of learning Mandarin.

Just a few months after beginning language lessons, he met Dr. Wu Yingkai, who was then the minister of health in China, at a medical lecture. Through their chance meeting, Dr. Nelson would begin a more-than-four-decade relationship with various Chinese leaders that has played a key role in bringing the gospel to the people of China.

In April 1984, Dr. Nelson became Elder Nelson as he was called to the Quorum of the Twelve Apostles. Beginning in late 1985, after being assigned to oversee the opening of countries in Eastern Europe, Elder Nelson made several trips to Washington, D.C., and Europe, meeting with diplomats and ambassadors to help open doors in European countries under communist regimes.

Over the course of several years working to bring the gospel to people throughout Eastern Europe, Elder Nelson, on various occasions, met with Konstantin Kharchev, chief of the council of religious affairs in Russia; Alexander Rutskoy, vice president of the Republic of Russia; and the former president of the Soviet Union, Mikhail Gorbachev.

Elder Nelson also met with Dr. Imre Miklós, head of the State Office for Religious Affairs for Hungary; Teofil Pop, the minister of justice in Romania; Vladmir Janko, the vice minister and director of the Secretariat for Church Affairs in the Czechoslovak Soviet Socialist Republic; and later with Josef Hromadka, the deputy prime minister of the Republic of Czechoslovakia.

Each time he encountered difficulties from these and other government leaders in trying to bring the gospel and the Church to their nations, Elder Nelson expressed his gratitude to the Lord for helping him to overcome the obstacles.

“I’ve seen this over and over again,” Elder Nelson said of receiving help from the Lord. “When we didn’t know what in the world to do next, the Lord stepped in and handed the answer to us on a silver platter. We would have had to be blind not to see it.” 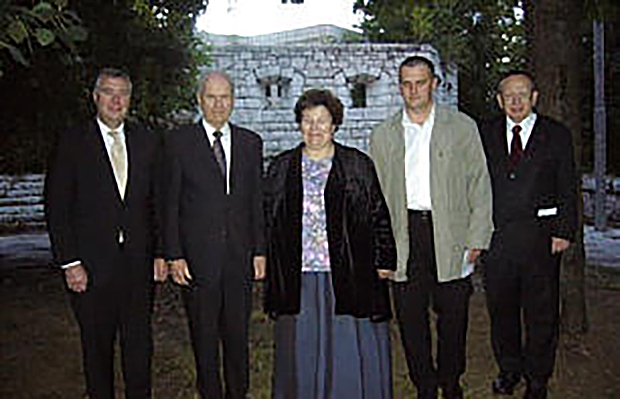 At the dedication of Bosnia-Herzegovina on September 8 in Vraca Memorial Park in Sarajevo are Elder Erich Kopischke, President of the Europe Area; then Elder Russell M. Nelson of the Quorum of the Twelve; Gordana Adamov, a pioneer member of the Church in Sarajevo; Damjan Matic; and Johann Wondra. Photo courtesy of Johann Wondra.

In 1995, after having opened more than 10 countries in Eastern Europe for the preaching of the gospel, Elder Nelson had the opportunity to meet with Chinese Vice Premier Li Lanqing during a visit to Hawaii. Lanqing later invited both Elder Neal A. Maxwell and Elder Nelson to visit him in China. There they met with the vice premier as well as with President Huaiyuan, president of the Chinese People’s Association for Friendship with Foreign Countries; Li Xiaolin, chief of American and Oceanian Affairs of CPAFFC; Zhang Xiaowen, the vice director of the State Education Commission; and Vice Minister Yin Dakui of the Ministry of Public Health.

Through that meeting, the Church was asked to send people to teach English in China and to help with various humanitarian efforts.

Years later, in 2015, Elder Nelson visited China again and was recognized by the hosting delegation as an “Old Friend of China,” which Elder Nelson said was the highest compliment they could give him. On that occasion, government leaders in both Beijing and Shanghai allowed Elder Nelson to meet with Church members. It was a historic moment for an outsider and leader of a religious organization to be allowed to speak to a congregation.

Influence as President of the Church

Since becoming President of the Church, President Nelson has continued his pattern of meeting with world leaders and furthering the advancement of the gospel around the world.

Following the tragic shootings at two mosques in Christchurch, New Zealand, in early 2019, President Nelson stood with Dr. Mustafa Farouk, the president of the Islamic Associations of New Zealand, in Auckland and announced a $100,000 donation to help rebuild the mosques damaged in the attacks.

“We are brothers,” President Nelson said. Dr. Farouk added: “We are all united. We are all one.”

Later, on the same trip, President Nelson met with New Zealand’s prime minister Jacinda Ardern in Wellington and thanked her for the courage she showed as a world leader in the aftermath of the shootings.

During one of his ministry visits to South America in October 2018, President Nelson also met with Peruvian president Martín Vizcarra.

In what was perhaps one of the most significant and historical meetings President Nelson has had with another worldwide leader, he met with Pope Francis in Vatican City in March of this year. At 94 years old, President Nelson became the first Church President to have a formal audience with the head of the Roman Catholic Church.

Following his visit with Pope Francis, President Nelson emphasized how much they had in common as faith leaders working toward common goals.

He is a “dear, wonderful, humble, competent, gracious man. I respect him highly,” President Nelson said. “How fortunate the Catholic people are to have such a gracious, concerned, loving, and capable leader.”

While visiting the Pacific Area in May, President Nelson had the opportunity to meet with prominent leaders in both Samoa and Tonga. In Samoa, he met with Prime Minister Tuilaepa Aiono Sailele Malielegaoi as well as the Samoan minister of agriculture and fisheries and the minister of revenues and prison. At the Royal Palace in Tonga, he met with His Majesty King Tupou VI and Her Majesty Queen Nanasipau’u. President Nelson was also greeted by the president of French Polynesia, President Edouard Fritch, when he arrived at the airport in Tahiti and was subsequently accompanied by the president throughout nearly his entire visit on the island.

His Eminence Timothy Cardinal Dolan, archbishop of New York, met with President Nelson and other Church leaders in Utah in June, and later that same month the First Presidency hosted a delegation from Vietnam in Salt Lake as well.

Following his initial visit in May 2018, President Nelson was invited by the Reverend Amos Brown, pastor of the Third Baptist Church of San Francisco, to speak at the 110th annual convention of the National Association for the Advancement of Colored People in Detroit, Michigan.

During the convention, Rev. Brown said that the NAACP and the Church were connecting “not as black or white, not as The Church of Jesus Christ of Latter-day Saints or Baptists, but as children of God who are about loving everybody and bringing hope, happiness, and good health to all of God’s children.”

Both of the South American governmental leaders expressed their gratitude for the members and influence of the Church in their countries and the work the Church has done to help people in both Colombia and Ecuador through their humanitarian efforts with Latter-day Saint Charities. 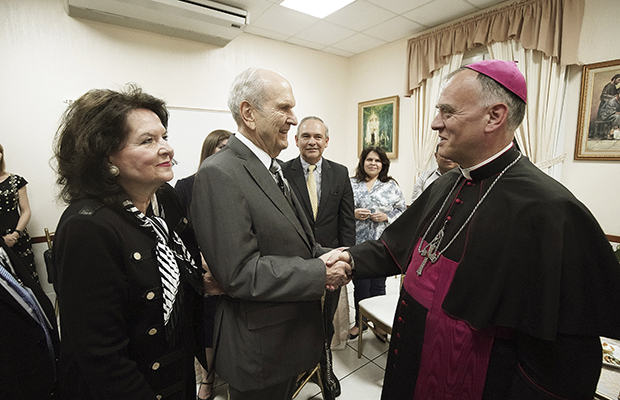 President Russell M. Nelson of The Church of Jesus Christ of Latter-day Saints and his wife, Sister Wendy Nelson, meet with Archbishop Henry Marie Denis Thevenin prior to a devotional in Guatemala City on Saturday, August 24, 2019. Photo by Jeffrey D. Allred, Deseret News. 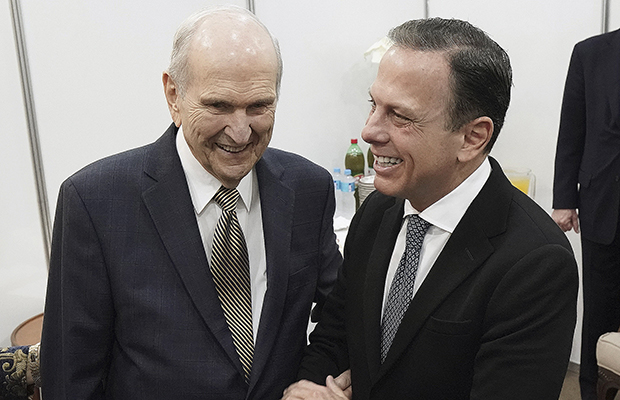 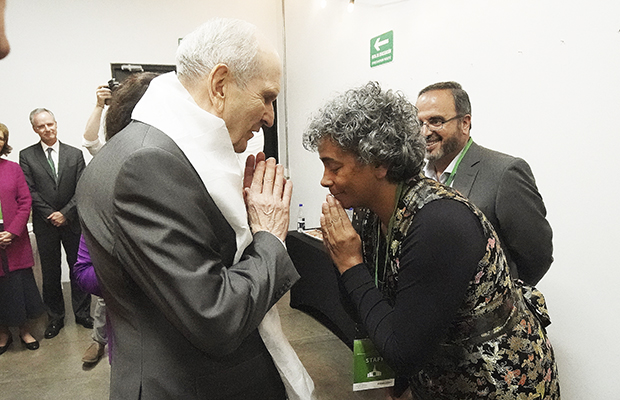 President Russell M. Nelson of The Church of Jesus Christ of Latter-day Saints is given a khata by Olga Lucia Sierra with Tibetan Buddhism of Colombia in Bogotá, Colombia, on Sunday, August 25, 2019. Photo by Jeffrey D. Allred, Deseret News. 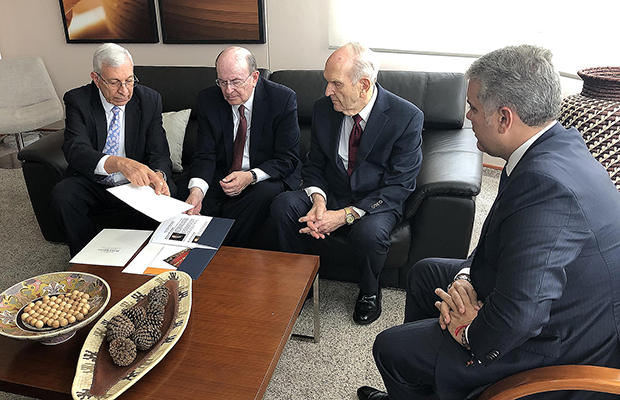 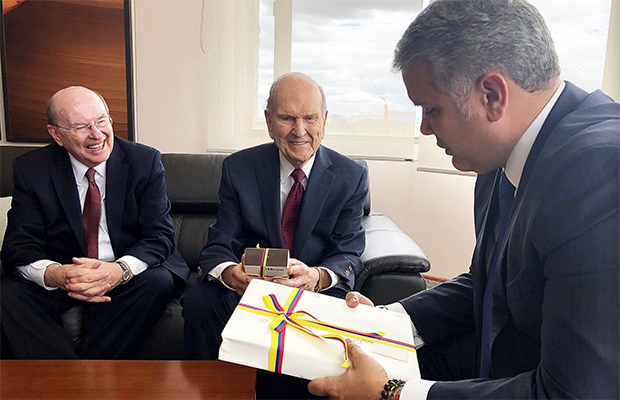 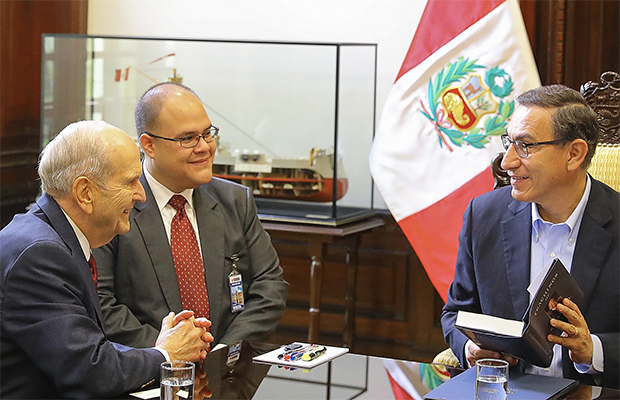 President Martín Vizcarra accepts a copy of Teachings of President Russell M. Nelson from President Nelson at the presidential palace in Lima, Peru, on Saturday, October 20, 2018. Photo courtesy of President of Peru. 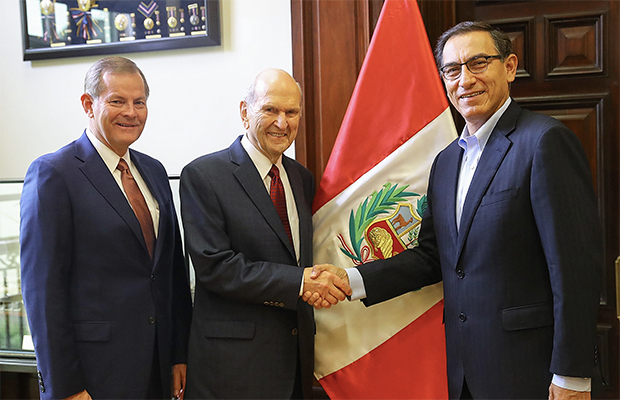 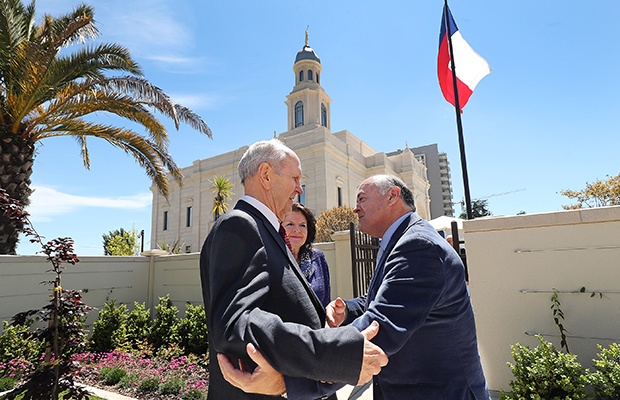 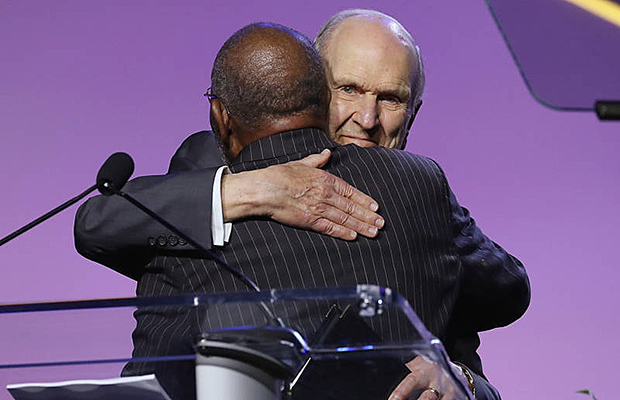 President Russell M. Nelson of The Church of Jesus Christ of Latter-day Saints hugs the Reverend Amos C. Brown after his introduction at the 110th annual national convention for the National Association for the Advancement of Colored People in Detroit on Sunday, July 21, 2019. Photo by Jeffrey D. Allred, Deseret News. 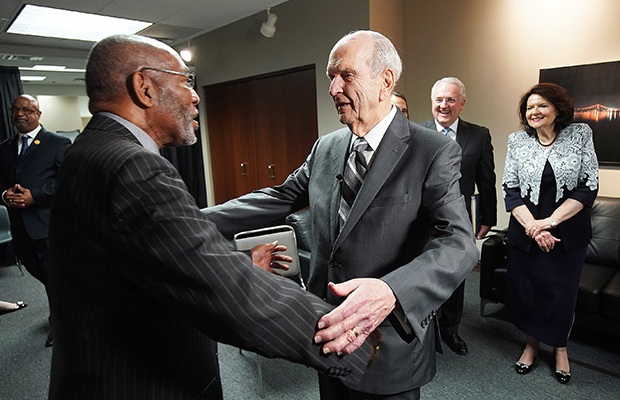 President Russell M. Nelson of The Church of Jesus Christ of Latter-day Saints embraces the Reverend Amos C. Brown at the 110th annual national convention for the National Association for the Advancement of Colored People in Detroit on Sunday, July 21, 2019. Photo by Jeffrey D. Allred, Deseret News. 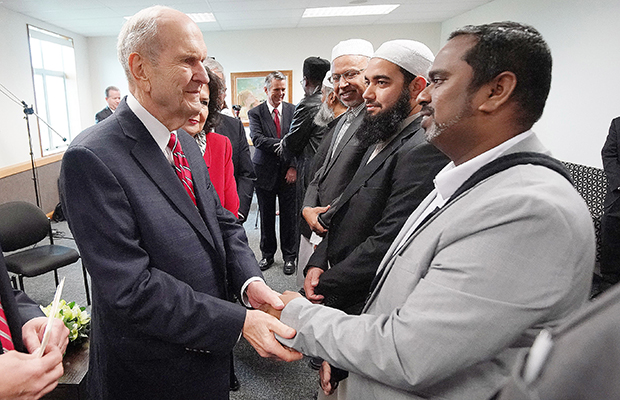 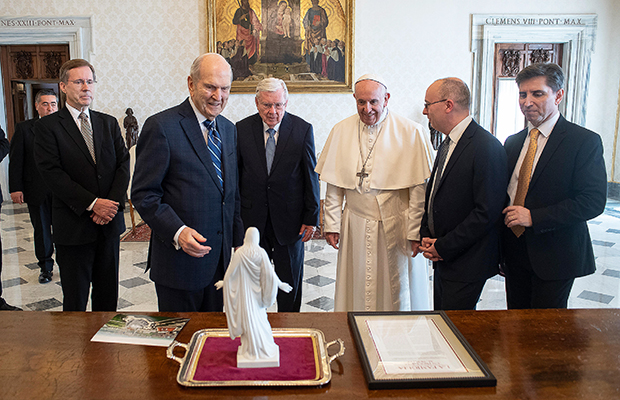 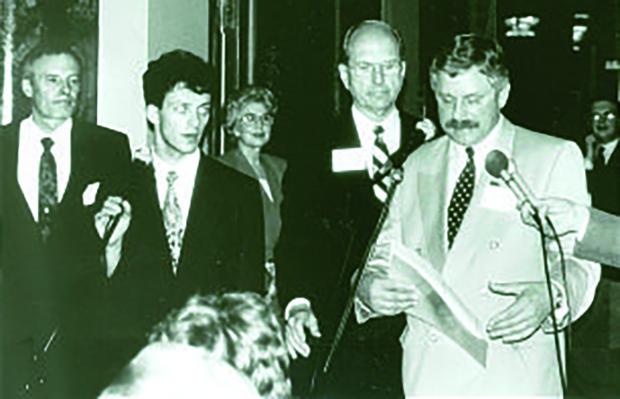