President Nelson Speaks at His “Righteous and Joyful” Daughter’s Funeral 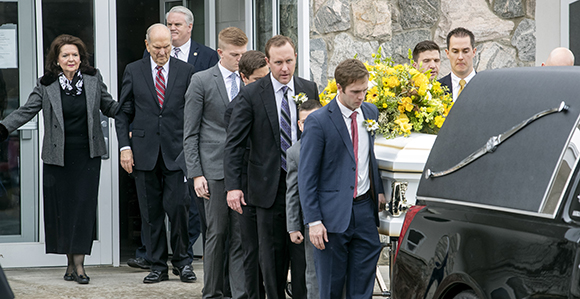 President Russell M. Nelson with his wife, Sister Wendy Nelson, exit the the Cottonwood Heights Utah Brighton Stake Center as the casket is placed into the hearse after President Nelson spoke at funeral services for his daughter Wendy Nelson Maxfield on Saturday, January 19, 2019. Photo by Scott G Winterton, Deseret News.

When a parent bids farewell to a child, something dies within that parent’s heart, said President Russell M. Nelson, speaking at funeral services for his “righteous and joyful” daughter on Saturday.

“But when love pours in so bounteously from family, friends, and colleagues, that grief is assuaged in a most marvelous way,” said the leader of The Church of Jesus Christ of Latter-day Saints.

A wife and mother, Wendy Maxfield was remembered for the love, testimony, music, energy, and laughter she shared. She and her husband, Norman A. Maxfield, are the parents of seven children and have 20 grandchildren. She is the second of nine daughters and one son born to President Nelson and Sister Dantzel White Nelson.

President Nelson was joined at the funeral service by his wife, Sister Wendy W. Nelson; three generations of his large family; his counselors in the First Presidency—President Dallin H. Oaks and President Henry B. Eyring; and numerous members of the Quorum of the Twelve Apostles.

President Nelson told his posterity: “I, with most of you, have shed many tears. I am especially comforted by the Lord’s commandment that ‘thou shalt live together in love, insomuch that thou shalt weep for the loss of them that die’ (Doctrine and Covenants 42:45).”

In his last conversation with his daughter, President Nelson reported to her “that her daddy is very proud of her,” he said. “She has always chosen to do that which is right.“

She married a wonderful husband for time and all eternity in a holy temple, he said. “The most important date in her life is neither her birth date nor her death date. Her most important date is August 27, 1974. That is the date she and Norm were sealed. Each child was born under the everlasting covenant made on that memorable date.”

President Nelson told his grandchildren that they will honor their mother—who spent her entire life ministering, teaching, loving, and serving others—through their own righteousness.

“Our tears of sorrow will turn to tears of anticipation as we gain an eternal perspective,” he said.

Thanks to the Atonement of Jesus Christ, Wendy Nelson Maxfield’s spirit still lives as an eternal entity, he said. With that eternal perspective, Latter-day Saints can understand better the purposes of life and death.

Quoting President Joseph F. Smith, President Nelson said, “‘Children should be taught early in life that death is really a necessity as well as a blessing, and that we would not and could not be satisfied and supremely happy without it.’

“Our precious Wendy had to pass through that gateway we call death in order to experience a fulness of joy.”

President Nelson said his daughter has been welcomed home by her mother, Sister Dantzel W. Nelson, who died unexpectedly on February 12, 2005, and her sister Emily Nelson Wittwer, who died on January 29, 1995. She will continue to grow, learn, and progress, he said. “Just think of what lies ahead for her.”

To her children and grandchildren, President Nelson said: “She can minister to you in what I call ‘parenting through the veil.’ She can see us more clearly through the veil than we see her. We cannot forget her. We do not cease to love her. We are sealed to her by eternal ties. She loves us now more than ever. Her desire for our well-being will be even greater than that which we feel for ourselves. So, dear family, stay tuned.”

Sister Gloria Nelson Irion, matron of the Nauvoo Illinois Temple, remembered her sister’s “love of the Lord and her desire to serve Him,” which extended naturally to serving others—especially her family.

All seven Maxfield children—Marissa Jackson, Blake Maxfield, Matthew Maxfield, Brady Maxfield, Megan Hammond, Bryndy Bradshaw, and Makenzie Taylor—spoke of their mother’s many attributes. She spent her days serving others; loving her husband, children, and grandchildren; and creating a home “centered on Christ,” they said.

“I believe my mother’s happiness came from her faith and belief in the gospel of Jesus Christ,” said Blake Maxfield. 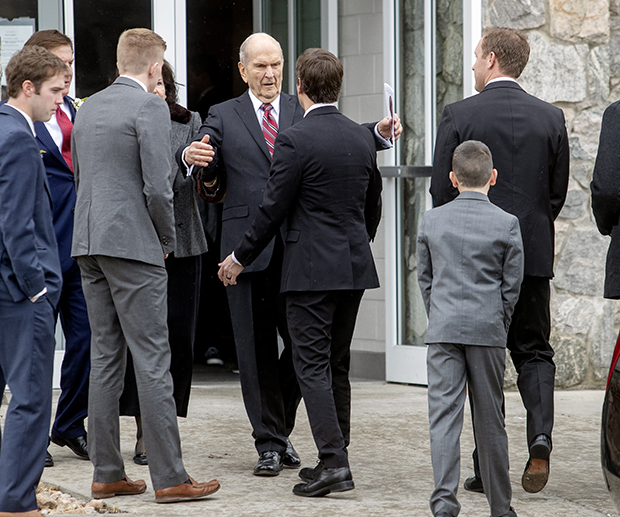 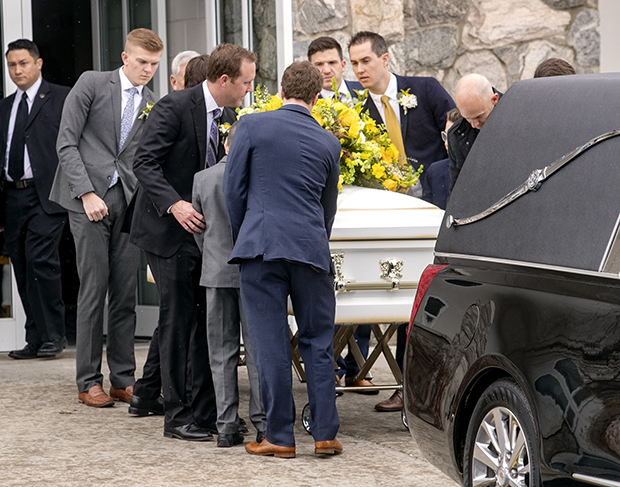 The casket of Wendy Nelson Maxfield is lifted and placed into the hearse after funeral services in the Cottonwood Heights Utah Brighton Stake Center on Saturday, January 19, 2019. Photo by Scott G Winterton, Deseret News. 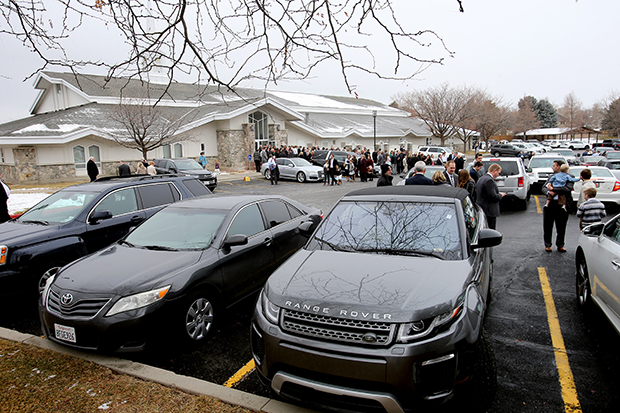