President Nelson Reflects on Being an Apostle of the Lord

In his office on Tuesday, September 29, President Russell M. Nelson, President of the Quorum of the Twelve Apostles, reflects upon his call to that quorum in 1984 and the calling of new Apostles.

“We are servants of the Lord. We are His agents, and that means salvation and exaltation for the people who come under the sphere of His influence.” —President Russell M. Nelson, President of the Quorum of the Twelve Apostles

“Every day is historic in this Church.”

So declared President Russell M. Nelson when a visitor to his office commented about the history-making event of having three vacancies in the Quorum of the Twelve Apostles as the 185th Semiannual General Conference convenes and the likelihood that the empty chairs among the Brethren would be filled during one of its sessions.

The historical record of this conference will make special mention of President Nelson. For the first time in a general conference, he will be sustained as President of the Quorum of the Twelve Apostles. His appointment to this position came with the deaths of two Brethren of the quorum who were senior to him: President Boyd K. Packer and Elder L. Tom Perry. The death of Elder Richard G. Scott created the third vacancy in the quorum.

“People are wondering if there will be Apostles chosen at this conference,” Elder Nelson said in a conversation with the Church News on September 29. He said there probably will be announcements of new Apostles, “but that is a matter between the Lord and His prophet.”

“There have been conferences where a vacancy has not been filled,” he explained. “President Heber J. Grant had announced to the Twelve that ‘so and so’ would be called, but it didn’t happen. Members of the Twelve asked him when the conference was over why he didn’t fill the vacancy. He replied that the man he said would be called wasn’t ready yet.”

President Nelson’s call to the Twelve filled a vacancy that had lasted for more than a year. Elder LeGrand Richards died on January 11, 1983. No new Apostle was sustained during the April or the October general conferences of that year. Russell M. Nelson, a world-renowned heart surgeon, was sustained as a member of the Quorum of the Twelve on April 7, 1984. During the same session, Dallin H. Oaks, a lawyer and a justice of the Utah Supreme Court, was called to fill the vacancy created by the death of Elder Mark E. Petersen on January 11, 1984. 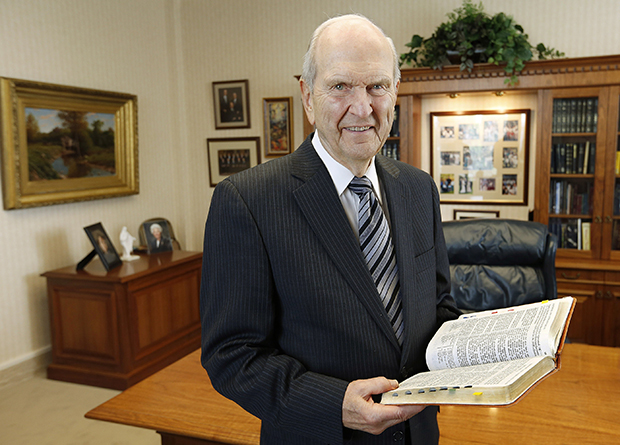 In his office on September 29, President Russell M. Nelson reflects upon his call to the Quorum of the Twelve Apostles in April 1984, his current appointment as President of that quorum, and the calling of new Apostles. Photo by Jeffrey D. Allred, Deseret News.

Of his call to the Quorum of the Twelve Apostles 31½ years ago, President Nelson said, “It doesn’t seem like that long ago. It was April 6, 1984. I was doing my duty as a doctor at the hospital, making rounds that morning, and attending a meeting of the regional representatives at their seminar before conference. I was summoned to the telephone by Arthur Haycock (secretary to President Spencer W. Kimball), who said, ‘Can you come to the office of the First Presidency?’ I said, ‘Of course, I’ll be happy to—but where is it?’ I didn’t have any idea where it was. That was how green I was. 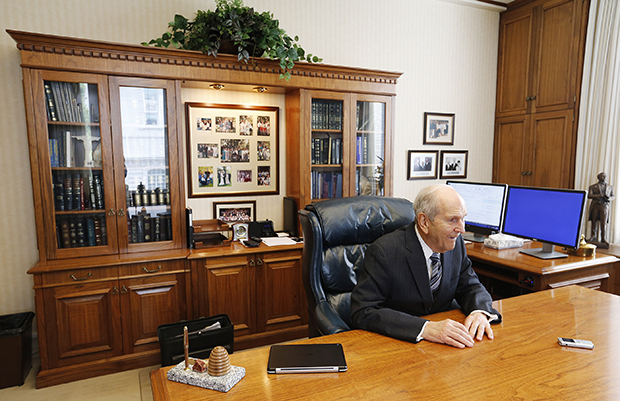 In his office on Tuesday, September 29, President Russell M. Nelson reflects upon his call to as an Apostle in 1984, his current calling as President of the Quorum of the Twelve Apostles, and the calling of new members to that quorum. Photo by Jeffrey D. Allred, Deseret News.

“After being called, I said to President Gordon B. Hinckley, a counselor to President Kimball with whom I was conversing, ‘I’m planning to go to China as a professor of surgery in the month of May. What do you want me to do about that?’ He asked, ‘Have you made a commitment?’ I said I had. He said, ‘Be faithful to it.’ So, as an ordained Apostle, I went to China.

“Elder Oaks had a similar transitional period between service on the supreme court and service as an Apostle. He had to write opinions on cases that had been tried in his court before he could come aboard.

“We may see that where a man is called to the Quorum of the Twelve he has to have a transitional period of disengagement from whatever he is doing to his new calling.” 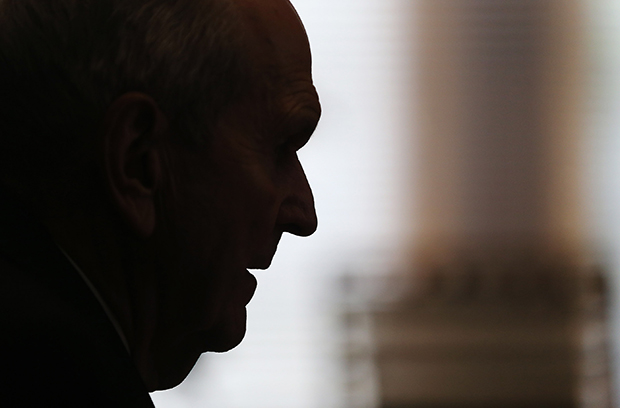 In his office on September 29, President Russell M. Nelson reflects upon his call to the Quorum of the Twelve Apostles in April 1984 and his current appointment as President of that quorum. Photo by Jeffrey D. Allred, Deseret News.

President Nelson said, “Throughout history the Lord has worked with imperfect people. He gives them the authority and responsibility to do His holy work. You have that irony of imperfect people doing the work of a perfect Lord. But the system is a wonderful system. Can you imagine an organization that might lose a chief financial officer or a chief executive officer, high-level positions, and lose them in a short period of time and still have the organization run as if nothing happened? That’s what you see here. The system of redundancy, backup, and training is such that the work of the Lord progresses regardless of who sits in the chairs. It’s a really inspiring thing. You look at a university or a big business where there’s a vacancy. A search committee works hard to find suitable successors. They do well, but it’s always a worry. Here, it is not a worry. You know the work of the Lord will be done by His servants. They are called by Him, and they will respond to His direction.”

President Nelson reflected on the support he received from other members of the quorum when he was called to serve among them. He spoke of Elder Bruce R. McConkie in particular. “Occasionally, I would have an idea I wanted to discuss or had a question. I would knock on his door, and he was always gracious, always warmly welcoming. When I could see this was an opportunity to learn from him, I would ask him to put his remarks on pause for a minute while I called Elder Oaks and asked him to come up so we could converse with Elder McConkie together. That was a rare privilege.

“Of course, all the other Apostles were equally compassionate and willing to share. We learned from one another. That continues. Even now, as I’m sitting in the quorum president’s chair, I go to my meetings early so I can learn from my Brethren. It’s not a matter of seniority. It’s a matter of spirit-to-spirit communication. It’s a glorious fringe benefit of this call to have the companionship of fellow Apostles and be taught by them.” 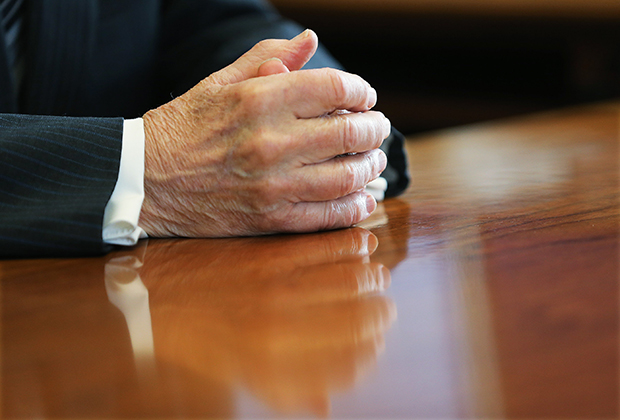 During an interview on Tuesday, September 29, President Russell M. Nelson rests his hands on his desk in his office in the Church Administration Building. Photo by Jeffrey D. Allred, Deseret News.

President Nelson said, “People wonder if there is going to be anything new, anything exciting in the way of a new announcement or a new direction. The interesting thing is that everything we teach is old. We teach the gospel of Jesus Christ, and that was taught to Adam and Eve. In every dispensation the Lord has taught the doctrine of deity, which doesn’t change. The world changes. We deal with a learning process now in the digital age, which is entirely different from Peter’s, James’s, and John’s age and the Apostle Paul’s age. It’s different from President Spencer W. Kimball’s age.”

The world will continue to change, but the commission of the Lord’s Apostles remains the same: to testify of and be special witnesses of the Lord Jesus Christ and help Heavenly Father’s children return to His presence.

President Nelson said he can empathize with those brethren who will be called to the Twelve. “There is no way you can describe it,” he said. “It is the most sacred thing that can happen to a man in this life. It is life-changing, yes. But hopefully, he, in turn, will be able to change the lives of many other people toward the Lord. This is what we do. We are servants of the Lord. We are His agents, and that means salvation and exaltation for the people who come under the sphere of His influence.” 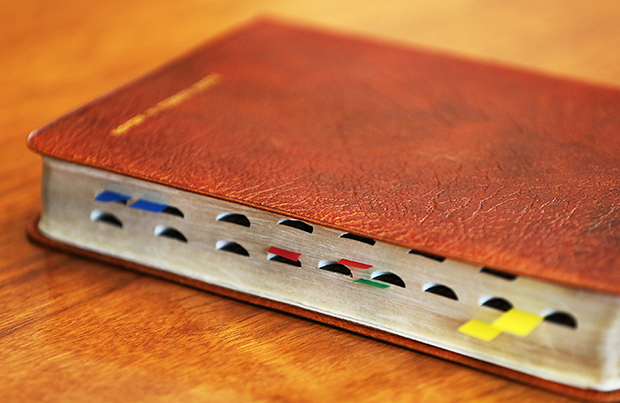 President Russell M. Nelson's triple combination of the Book of Mormon, Doctrine and Covenants, and Pearl of Great Price is on his desk Tuesday, September 29, 2015. Photo by Jeffrey D. Allred, Deseret News. 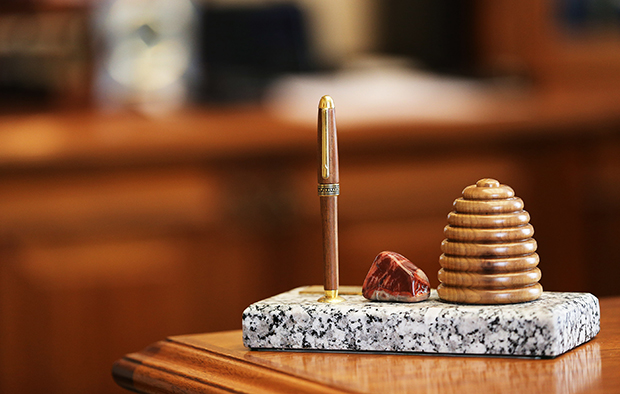 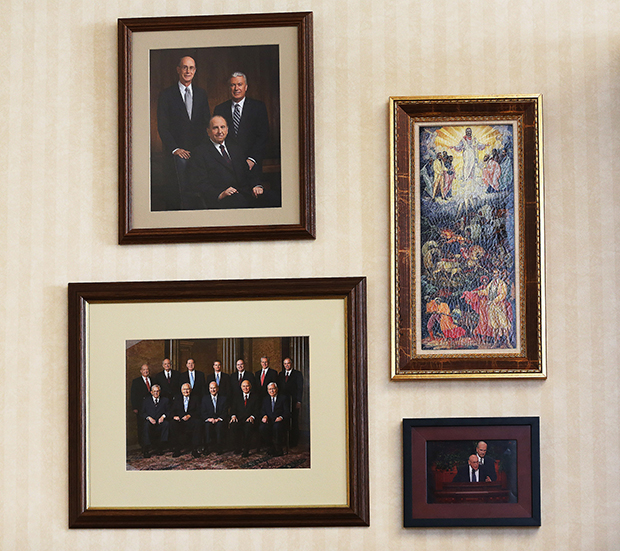 Photos and paintings in President Russell M. Nelson's office show the First Presidency and the Quorum of the Twelve Apostles and scenes illustrating the scriptures. Photo by Jeffrey D. Allred, Deseret News. 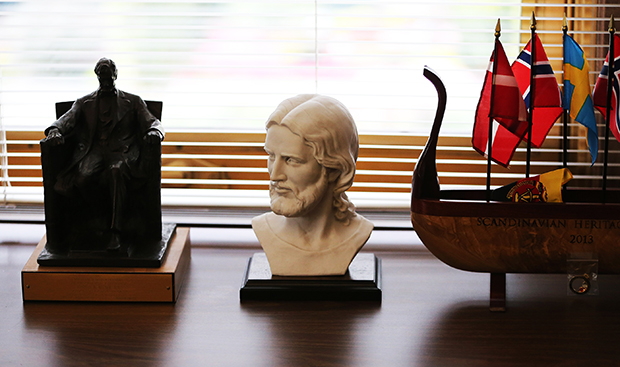