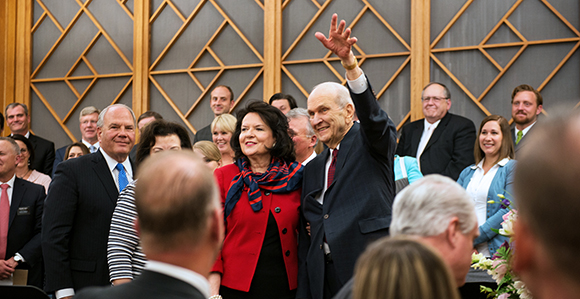 President Russell M. Nelson with his wife, Sister Wendy Nelson, at his side, waves to members following a devotional on June 10, 2018, in Raymond, Alberta. Elder Ronald A. Rasband and his wife, Sister Melanie Rasband, are at the left.

“Guard [the Book of Mormon], know it, read it, study it, teach it, and give God thanks for that great gift to us.” —President Russell M. Nelson

From their front-row seats on the rostrum as Area Seventies, Elders G. Lawrence Spackman and James E. Evanson personally witnessed the influence and impact of President Russell M. Nelson with Saints in the Canadian province of Alberta during his June 8–10 visit, including three devotionals in as many evenings in the cities of Edmonton, Calgary, and Raymond.

“The best way to describe it was that the members feel like they had been truly ministered to,” said Elder Spackman of Calgary, who conducted the Edmonton and Calgary devotionals. “How he can do that for thousands of people at once is hard to comprehend—that he would take the time to come up to Alberta—and three different times he was reaching everybody.”

Elder Evanson, who is from Lethbridge and conducted the Raymond devotional, agreed. “He taught us gospel principles and doctrine and then invited us to follow him in sharing the gospel with others and helping the gathering of Israel.

“Much like he did with the youth in the worldwide devotional the Sunday before, he gave us an invitation to be part of the house of Israel that would gather scattered Israel. We left with the feeling that we can have a very important and significant part in the role in gathering Israel back home to Zion.”

“Their messages were powerful and a blessing,” Elder Spackman said of the group, each of whom spoke at all three of the sessions. “They made great companions working together, President Nelson and Elder Rasband.”

And at the end of each devotional, President Nelson pronounced an apostolic blessing on those attending.

The three weekend evening devotionals were held Friday, June 8, in Edmonton, Alberta’s capital; Saturday, June 9, in Calgary; and Sunday, June 10, in Raymond, in the southern part of the province. Each devotional was held in a local stake center and broadcast to other stake centers and meetinghouses in the respective coordinating councils—six other stakes in both the Edmonton and Calgary areas and a dozen stakes in southern Alberta and southeastern British Columbia for the Raymond devotional.

“Through the use of modern technology, the meeting was broadcast even to our little remote building on the edge of our stake,” said Tye Barrett, president of the Peace River Branch, located 488 kilometers (303 miles) northwest of Edmonton. “This was an amazing blessing to the Saints of our little branch who were unable to travel the five or six hours to attend the meeting in person.”

The Raymond devotional alone drew more than 10,000, said Elder Evanson. More than 2,000 were present in the Raymond stake center, with another 8,000 in buildings receiving the broadcast throughout the neighboring stakes.

Alberta is home to 81,547 Latter-day Saints—41 percent of the more than 196,000 members who reside in Canada’s 10 provinces and three territories—as well as two of the country’s seven missions and three of Canada’s eight temples. 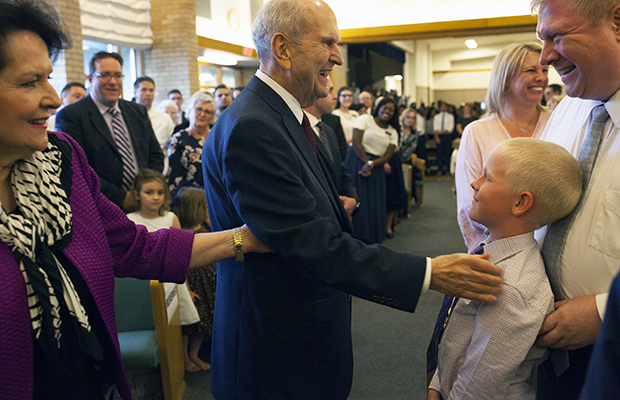 The trip was a homecoming for Sister Nelson, who grew up in Raymond and lived, studied, and worked in Calgary for many years as a professor and marriage and family therapist.

“There were hundreds of family and friends of Sister Nelson’s to welcome the prophet and her, to shake hands and to take pictures and just to connect with him and her on a very personal level,” Elder Evanson said. “It think it was a very sweet experience for Sister Nelson, especially to be here in her home province and meet and greet so many of her friends.”

Elder Spackman, who, with his wife, have been longtime friends and were fellow ward members with Sister Nelson in Calgary, said, “We here got to know her as a wonderful person for many years before the rest of the Church got to know her.”

In Edmonton, President Nelson shared in-depth teachings on the gathering of Israel, starting from Old Testament times to modern-day opportunities as he spoke about the children of Israel, the twelve tribes, the mothers of the twelve sons, and the derivations of the different names. 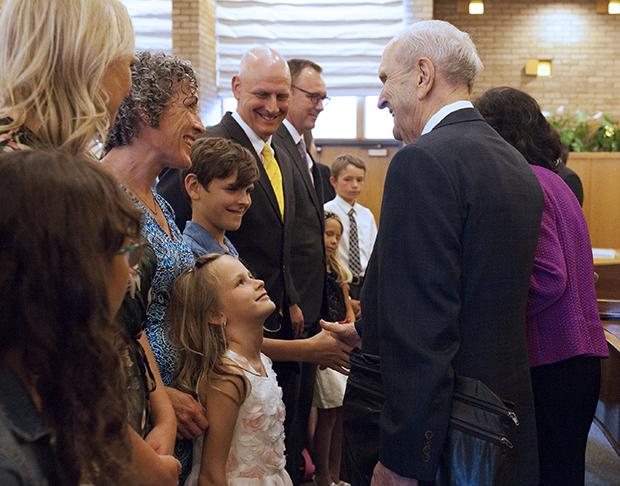 “He wasn’t referring to any notes; he just had it right there at the top of his mind,” Elder Spackman said of the prophet. “His mind is just amazing to me.”

In Calgary, President Nelson spent much of his message speaking and giving his witness of the Book of Mormon. “Guard it, know it, read it, study it, teach it, and give God thanks for that great gift to us,” he said.

Chase Hochstein, who viewed the Calgary broadcast from Banff, said, “What impacted me as he spoke to us was that reading and studying the Book of Mormon is what brings perspective, peace, and comfort when I need it most.” 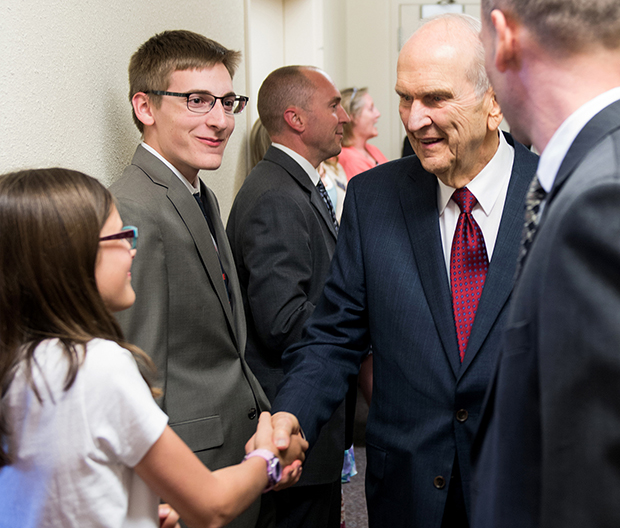 Elder Spackman said he was aware there were a number of nonmembers attending the Calgary devotional. “It was perfect for people who were building their testimony or who didn’t know much about the Church,” he said.

In Raymond, Sister Nelson spoke of visiting the local cemetery, where five generations of her family are buried, as well as memories of her youth in Raymond. She also related watching her husband write on a yellow notepad kept at the side of his bed during the night, noting impressions as they come and adding how she sometimes feels prompted to leave the room so that he can be alone in that process.

“She testified of how real and true the concept of modern revelation from the Lord to His prophet really is,” said Zach Gorham, who watched the Raymond devotional in Cardston. “I have never heard a prophet’s wife talk about that process before, and it was really interesting to hear it from her perspective.”

In addition to the three devotionals, the Nelsons and Rasbands also attended local ward sacrament meetings Sunday morning, June 10—the Nelsons with the Raymond 7th Ward and the Rasbands in Lethbridge with the Forestry Ward.

“I was at the one with Elder Rasband, and it was really quite a sweet experience to watch the expression of the members when they saw that Elder Rasband was there in their sacrament meeting,” Elder Evanson said. “The reverence in that chapel just increased dramatically when he walked in, and he and Sister Rasband gave a beautiful message to the Saints in that ward about optimism and following the covenant path that we’re given in this world.” 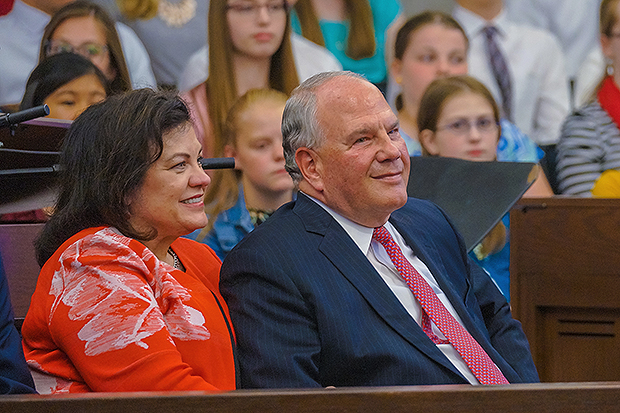 Elder Ronald A. Rasband of the Quorum of the Twelve Apostles and his wife, Sister Melanie T. Rasband, attend a devotional in Alberta, Canada.

With tens of thousands touched by the teachings of the Nelsons and the Rasbands, Saints in Alberta will not soon forget what they heard, what they saw, and what they felt.

“This experience just strengthened my own personal witness that these are prophets and apostles of God,” Elder Evanson said. “I felt of their love and their desire for us to feel of Heavenly Father’s love.“ 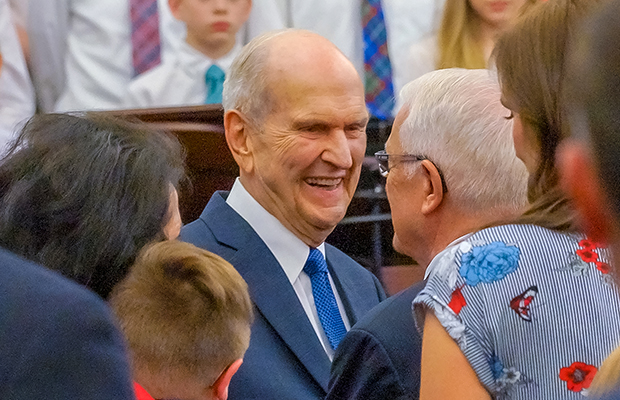 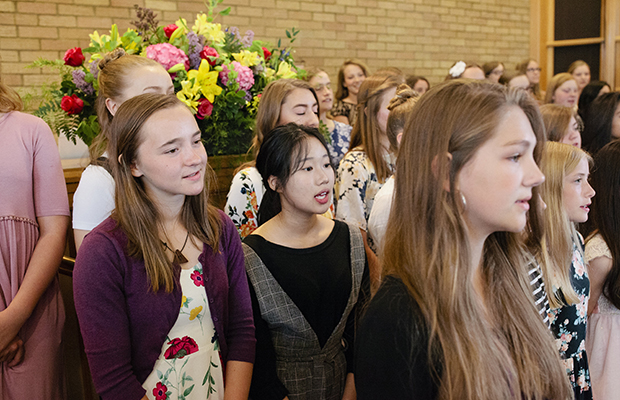 A youth choir performs during the broadcast of the June 9, 2018, devotional that welcomed President Russell M. Nelson and his wife, Wendy W. Nelson, and Elder Ronald A. Rasband, and his wife, Melanie T. Rasband. 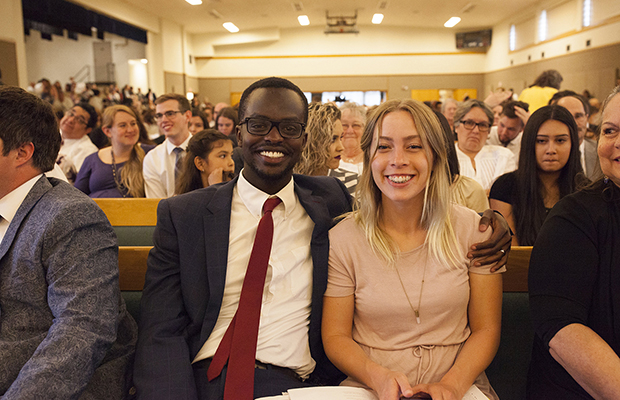 Marc and Vickie Nzojibwami attended the June 9, 2018, devotional in Calgary, Alberta. Vickie said that “while listening to President Nelson, it was evident to me that this is no ordinary man. He is truly a prophet of God.”