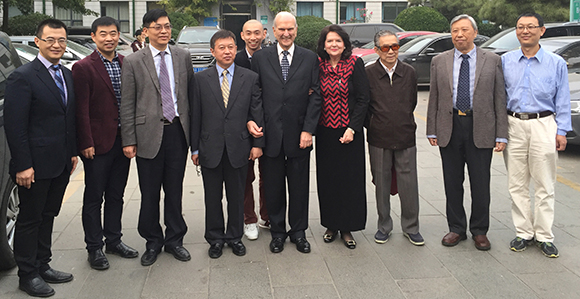 President Russell M. Nelson stands with his former students in front of the building at the Shandong University School of Medicine in Jinan, Shandong, China, where he taught open-heart surgery and performed operations in the 1980s. At his left is his wife, Wendy Watson Nelson. Over his right shoulder is the grandson of late Chinese opera star Fang Rongxiang, whose life President Nelson saved in 1985 with a coronary artery bypass graft operation. This photo was taken Friday, October 23, 2015.

“The Chinese people value those long-term relationships, and I’m really pleased that I’m regarded here as one of their old friends.” —President Russell M. Nelson of the Quorum of the Twelve

President Russell M. Nelson, who introduced open-heart surgery to China 35 years ago, was honored as an old friend of that country on October 23 by the doctors he trained at the Shandong University School of Medicine.

In 1980, President Nelson spent a month as a visiting professor at the school. Today, it is now a major medical center where surgeons perform 2,000 such operations each year.

The story of how he came to pioneer open-heart surgery in China includes a decision to follow a prophet's voice and learn Mandarin and the remarkable tale of the final operation of his career, which happened unpredictably a year into his apostleship in 1985.

President Nelson, President of the Quorum of the Twelve Apostles, pioneered open-heart surgery in Utah, performing the first such operation in the state in 1955. He had no idea he would do the same in China when, in 1979, President Spencer W. Kimball challenged General Authorities and general officers of the faith to learn Mandarin. President Nelson was the Church's general Sunday School president. He accepted President Kimball's charge and hired a tutor.

“My willingness to heed the voice of the prophet when he gave the challenge became a very significant part of my life, actually,” President Nelson said.

It didn't take long. Later in 1979, Dr. Wu Ying-Kai, the father of thoracic surgery in China, invited President Nelson to go to China in 1980 as a visiting professor of surgery.

President Nelson accepted. The month he spent in Jinan, the capital city of the Shandong province, led to a number of exchanges, with Chinese doctors also visiting Salt Lake City on training visits.

It appeared President Nelson's hands-on part in the efforts were at an end in April 1984, when he was called to the Quorum of the Twelve Apostles. But first he returned to China as a newly ordained Apostle to fulfill a preexisting commitment both at Shandong University and two other medical schools.

Dr. Nelson then retired from his medical career and became Elder Nelson full-time. Or so he thought.

Fang would live almost five more years, and in 1986, when President Nelson visited again as a Church authority, Fang's family performed a miniature opera for him to the delight of President Nelson and Chinese media.

The relationships have continued, with exchange visits between the Chinese and those who succeeded President Nelson in his surgical practice, but last month he returned on another Church visit with his wife, Wendy Watson Nelson. Also in China was Asia Area President, Elder Gerrit W. Gong of the Seventy, his wife, Sister Susan Gong, and another member of the Area Presidency, Elder Chi Hong (Sam) Wong of the Presidency of the Seventy and his wife, Sister Carol Wong.

He found Jinan had grown from a city with one stoplight to a major metropolis with 6.8 million people, and the hospital where once ice was carried inside on a bicycle with muddy wheels is now one of China's major medical centers.

More than 100 people greeted President Nelson, who was showered with gifts.

“It was the most moving tribute,” Elder Gong said, “for a wonderful portrait of service to the Chinese people, in Chinese, that started all those years ago.”

“The Chinese people value those long-term relationships,” President Nelson said, “and I'm really pleased that I'm regarded here as one of their old friends.”

Elder Gong said the evidence of President Nelson's influence was all around during the visit, as they met multiple generations of doctors trained in open-heart surgery, not to mention Fang's son and grandson, who cried tears of gratitude for the extra years they had with their father and grandfather.

“My covenants to the Lord include service to others,” President Nelson said. “It's very significant that after my long career in cardiac surgery, the last surgical operation that I ever did was in the People's Republic of China.

”It's very significant, personally,“ he added, ”and who knows? The story isn't over yet. We don't know what the future will be.“