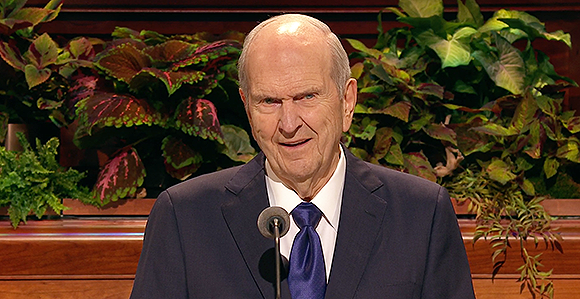 President Russell M. Nelson speaks during the general women's session of the October 2019 general conference of The Church of Jesus Christ of Latter-day Saints on Saturday, October 5, 2019.

“How I yearn for you to understand that the restoration of the priesthood is just as relevant to you as a woman as it is to any man.” —President Russell M. Nelson

The heavens are just as open to women who are endowed with God’s power flowing from their priesthood covenants as they are to men who bear the priesthood, said President Russell M. Nelson during the women’s session of the 189th Semiannual General Conference on October 5.

“I pray that truth will register upon each of your hearts because I believe it will change your life. … I would like to leave a blessing upon you, that you may understand the priesthood power with which you have been endowed and that you will augment that power by exercising your faith in the Lord and in His power..”

Just three days after announcing a historic policy change allowing women, youth, and children to serve as witnesses of sealing and baptismal ordinances performed in and out of temples, President Nelson addressed women about priesthood power, covenants and holy temples.

Every woman and every man who makes covenants with God and keeps those covenants, and who participates worthily in priesthood ordinances, has direct access to the power of God, he said. “Those who are endowed in the house of the Lord receive a gift of God’s priesthood power by virtue of their covenant, along with a gift of knowledge to know how to draw upon that power.”

“It was also in Harmony that Joseph received a revelation manifesting the Lord’s will to Emma. The Lord instructed Emma to expound the scriptures, to exhort the Church, to receive the Holy Ghost, and to spend her time ‘learning much.’ Emma was also counseled to lay aside the things of this world and seek for the things of a better, and to hold fast to her covenants with God. The Lord concluded His instruction with these compelling words: ‘This is my voice unto all’ (Doctrine and Covenants 25:7–16).”

President Nelson said that everything that happened in Harmony has profound implications for the women of the Church. “The restoration of the priesthood, along with the Lord’s counsel to Emma, can guide and bless each of you,” he said. “How I yearn for you to understand that the restoration of the priesthood is just as relevant to you as a woman as it is to any man.”

Latter-day Saint women have the right to draw liberally upon the Savior’s power to help their family and others they love, President Nelson said.

It’s a process, however, that is not spelled out in any manual. “The Holy Ghost will be your personal tutor as you seek to understand what the Lord would have you know and do,” he said. “This process is neither quick nor easy, but it is spiritually invigorating.

“What could possibly be more exciting than to labor with the Spirit to understand priesthood power—God’s power?”

Accessing the power of God requires the same things that the Lord instructed Emma, and all other Latter-day Saint women, to do, he said. 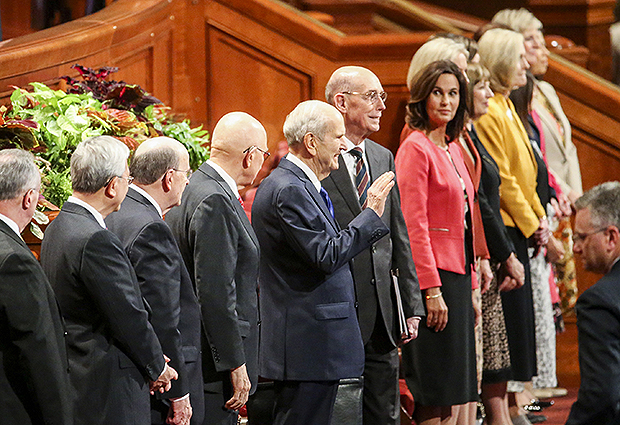 President Russell M. Nelson, center, waves to conference-goers before the women’s session of the 189th Semiannual General Conference of The Church of Jesus Christ of Latter-day Saints in the Conference Center in Salt Lake City on Saturday, October 5, 2019. Photo by Colter Peterson, Deseret News.

“So, I invite you to study prayerfully section 25 of the Doctrine and Covenants and discover what the Holy Ghost will teach you. Your personal, spiritual endeavor will bring you joy as you gain, understand, and use the power with which you have been endowed.”

Part of this endeavor will require putting aside many things of this world, he said.

“Sometimes we speak almost casually about walking away from the world with its contention, pervasive temptations, and false philosophies,” he said. “But truly doing so requires you to examine your life meticulously and regularly. As you do so, the Holy Ghost will prompt you about what is no longer needful, what is no longer worthy of your time and energy.”

President Nelson then added a warning. “There are those who would undermine your ability to call upon the power of God. There are some who would have you doubt yourself and minimize your stellar spiritual capacity as a righteous woman.”

Satan and his minions will constantly contrive roadblocks to prevent women from understanding the spiritual gifts with which they have been and can be blessed, said President Nelson. “Unfortunately, some roadblocks may be the result of another’s misbehavior,” he said. “It grieves me to think that any of you have felt marginalized or have not been believed by a priesthood leader, or have been abused or betrayed by a husband, father, or a supposed friend. I feel deep sorrow that any of you have felt sidelined, disrespected, or misjudged. Such offenses have no place in the kingdom of God.”

Conversely, President Nelson said he is thrilled when he learns of priesthood leaders that eagerly seek the participation of women in ward and stake councils. “I am inspired by each husband who demonstrates that his most important priesthood responsibility is to care for his wife. I praise that man who deeply respects his wife’s ability to receive revelation and treasures her as an equal partner in their marriage.

“When a man understands the majesty and power of a righteous, seeking, endowed Latter-day Saint woman, is it any wonder that he feels like standing when she enters the room?”

From the dawning of time, women have been blessed with a unique moral compass—the ability to distinguish right from wrong, he said.

“My dear sisters, your ability to discern truth from error, to be society’s guardians of morality, is crucial in these latter days. And we depend upon you to teach others to do likewise. Let me be very clear about this: If this world loses the moral rectitude of its women, the world will never recover.”

President Nelson also clarified additional points with respect to women and the priesthood.

“When you are set apart to serve in a calling under the direction of one who holds priesthood keys—such as your bishop or stake president—you are given priesthood authority to function in that calling.

“Similarly, in the holy temple, you are authorized to perform and officiate in priesthood ordinances every time you attend. Your temple endowment prepares you to do so.”

Righteous, endowed Latter-day Saint women speak and teach with power and authority from God, he said. “Whether by exhortation or conversation, we need your voice teaching the doctrine of Christ. We need your input in family, ward, and stake councils. Your participation is essential and never ornamental.”

President Nelson asked Latter-day Saint women to study prayerfully all the truths they can find about priesthood power. “As your understanding increases and as you exercise faith in the Lord and His priesthood power, your ability to draw upon this spiritual treasure that the Lord has made available to you will increase. As you do so, you will find yourselves better able to help create eternal families that are united, sealed in the temple of the Lord, and full of love for our Heavenly Father and Jesus Christ.”

All the Church’s efforts to minister, proclaim the gospel, perfect the Saints, and redeem the dead converge in the holy temple.

“We regard a temple as the most sacred structure in the Church. Whenever plans are announced to construct a new temple, it becomes an important part of our history.  As we have discussed here tonight, you sisters are vital to the work of the temple, and the temple is where you will receive your highest spiritual treasures.”